The odds mandated the Italians make their way into the playoff final, but the fates had more pain in store for the European champions. A lack of incision in the final third paved the way to a stunning climax that barred the revival of the Azzurri from reaching its natural endpoint.

Dante, a forerunner of the original Renaissance, still receives acclaim for his ‘Divine Comedy.’ The poetry captures his travels from the depths of Hell to Heaven, acting as a representation of the soul’s passage to God. At the end of 2021, the new Renaissance era may have seen Italy pass through the Inferno, but their manager must now author the final chapter of the country’s journey to the heavens.

The Azzurri have undergone a renaissance under the aegis of Roberto Mancini. From the disgrace of missing out on the World Cup for the first time in 60 years, his astute work has reshaped the outlook of his outfit. Style and substance created the ideal storm at EURO 2020, echoing feats of the Romans to conquer Europe, but this new imperial dynasty must still entrench its roots. To book their place at this year’s World Cup, the same playoff heartache that set in motion this very project looms at large.

If the Italians are keen to atone for falling short of their status in national football, their guests seek to etch a new chapter in their nascent history books. EURO 2020 was the first tournament in which North Macedonia have featured: they now strive for a loftier goal. The Balkans finished as the best of the rest in their group, scalping the winners Germany on their way to second place with 18 points, one ahead of Romania. Riding the crest of another new challenge, could they pull off the ultimate upset?

Mancini did not move away from his usual 4-3-3 formation. But he did not tinker with the front three as he has done against Northern Ireland in the 0-0 draw at the end of 2021: Ciro Immobile led the line. Injuries had plagued the back four, where the manager strayed the most from the tried and tested. Gianluca Mancini and Alessandro Bastoni operated centrally in place of Leonardo Bonucci and Giorgio Chiellini. To their left was Emerson, deputy for long term absentee Leonardo Spinazzola.

New North Macedonian manager Blagoja Milevski has altered the identity of this team. A 5-3-2 block was the norm under Igor Angelovski until EURO 2020, but a back four is now standard. Ahead of kickoff, the absence of several key figures lessened the odds of a shock. Suspension ruled out Eljif Elmas, while Goran Pandev stepped aside from national duty in the summer. So, Milan Ristovski led the line as the lone striker in a 4-4-1-1 setup, while Arijan Ademi featured in the middle of the park.

The basis of Italy’s ball dominant style under Mancini at EURO 2020 was an asymmetric 3-2-4-1 structure. Rotating from their 4-3-3 shape, Mancini’s men fell back on usual offensive automatisms.

To the right of the back four, Alessandro Florenzi held back to form the base of three while keeping the width. On the other hand, Emerson bombed much higher up the left flank. Lorenzo Insigne moved inward, buzzing around in the halfspace while Domenico Berardi held the width. A final asymmetry emerged between the central midfielders to either side of Jorginho. Marco Verratti often tilted deeper into the room next to Bastoni, and Nicolò Barella operated from a higher position between the lines. 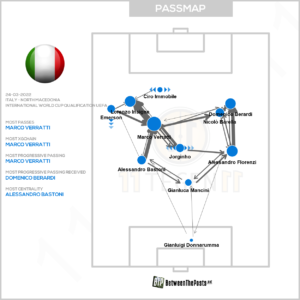 If Verratti dropped off in the left halfspace, Jorginho varied support for his teammate. Bardhi often pursued the lone pivot, marking him to lessen his impact on the contest. So, Jorginho could stay away to pull apart the pivot or move closer to Verratti to entice Bardhi out of position and get on the ball.

The axis of Bastoni, Verratti, and Insigne on the left edge of the Italian attack gave the hosts a strategic focus on that side of the pitch. A possible variant saw Verratti and Jorginho stay in the central zone of the field rather than one of the pair dropping off in the halfspace. Bastoni, a calm customer on the ball, could then step into the room Emerson cleared to try to engage the midfield. 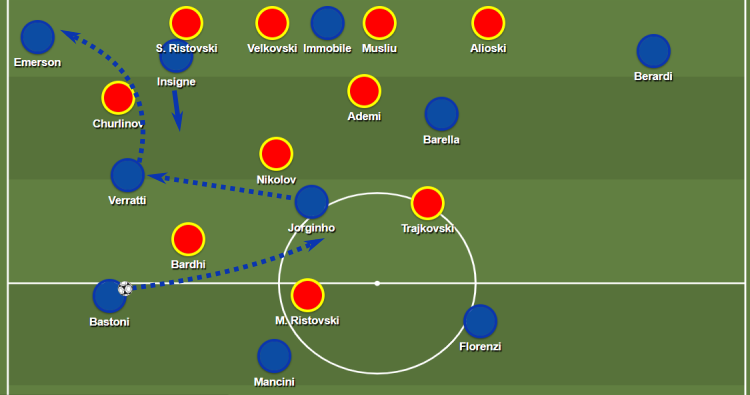 9th minute: offensive sequence from Italy. Enis Bardhi moves out to close down Bastoni, but Ristovski does not drop off to mark Jorginho. The holding midfielder can lure forward Boban Nikolov from the base of the midfield, inviting him to shift the play to Verratti. Insigne then draws the attention of three defenders with his interlinear positioning, creating access to Emerson with a lofted pass to the flank.

Bastoni’s front foot role on the ball was prominent, in part, due to the task of Darko Churlinov. Off the ball, the right winger worked diligently. He shifted inward to the halfspace before dropping to cover Emerson if necessary. Such protection was all the more important in light of Nikolov’s flexible role. 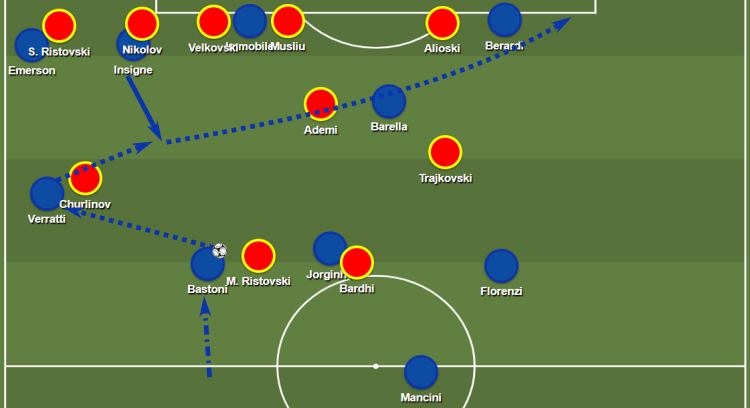 24th minute: offensive sequence from Italy. Bastoni dribbles over the halfway line, drawing cover from Milan Ristovski while Bardhi orients himself to Jorginho. Verratti connects the play forward through the left halfspace to find Insigne, whose lofted diagonal ball seeks to create ball far access into Berardi. Notice Nikolov’s brief man marking of Insigne, forming a temporary back five, before pushing out of the chain at the back to force the forward away from ball progression on the left flank.

The right sided member of the double pivot faced Verratti. If the Italian dropped back to pick up the ball and instigate the play, it was a cue for Nikolov to push up. Hence, the visitors often created an asymmetrical 4-3-2-1 shape where the midfielder was to the right of Bardhi, Ademi tended over to the left, and the wingers offered protection. Nikolov could also drop to the inside of right back Stefan Ristovski to absorb the danger of Insigne as another means of generating a chain of five at the back.

In this way, the guests shielded the left halfspace, a strategically pivotal space for the Italians, variably. Insigne mainly drifted in this pocket, looking to stitch the play to the other forwards as a focal point in the attack. But the indenting winger struggled to make a decisive mark from this area.

Insigne became cut off from Emerson and Immobile, while Barella usually drifted out to the right, rotating with Berardi without having a striking influence in the box. Italy were far more like their old selves in approach, but the fine details were missing. Could Mancini make the difference at half time?

Sticking with the same eleven men after the break, Mancini would not have been content with the course of the game. Though their energy waned, the away team did not relent in their box. What’s more, North Macedonia began to threaten sporadically, testing the compactness of the Italian block.

So, Mancini began to ring the changes. Sandro Tonali came on for Barella and Lorenzo Pellegrini replaced Ciro Immobile in the 77th minute. Giacomo Raspadori, featuring on the left wing in place of Insigne a little after the hour mark, moved into the striker berth. But North Macedonia held firm.

Chiellini and debutant João Pedro entered the fray as extra time drew nearer. The prospect of half an hour more of action had forced the hand of Mancini, yearning to push his men over the line. But he could have only conceived the outcome of the five minutes of the allotted time in his worst nightmare.

Stole Dimitrievski punted long from a goal kick into Italian territory, where Bojan Miovski won an aerial duel against Bastoni. The ball then looped over Jorginho into the room in front of the rest of the rearguard, letting Trajkovski pick up the pieces. The winger drove forward to the edge of the penalty area, hitting a fierce strike at goal. Gianluigi Donnarumma could not react: 1-0 North Macedonia.

North Macedonia have scored in added-time 😱

Italy are on the brink of not reaching the World Cup 😳 pic.twitter.com/ty5GzandXP

One can forgive Italians for seeing this loss as part of a tradition that has seen their nation fall far short of the mark in their pursuit of World Cup glory. Their exit was not as embarrassing as in 2017, executing in the first two thirds of the play. Yet, another shutout in a crucial fixture was costly. For all the critiques of Immobile, Mancini must refine his outfit’s final third patterns. The foundations of a solid project are no longer absent, but the rules of a ruthless arena stress the importance of evolution. 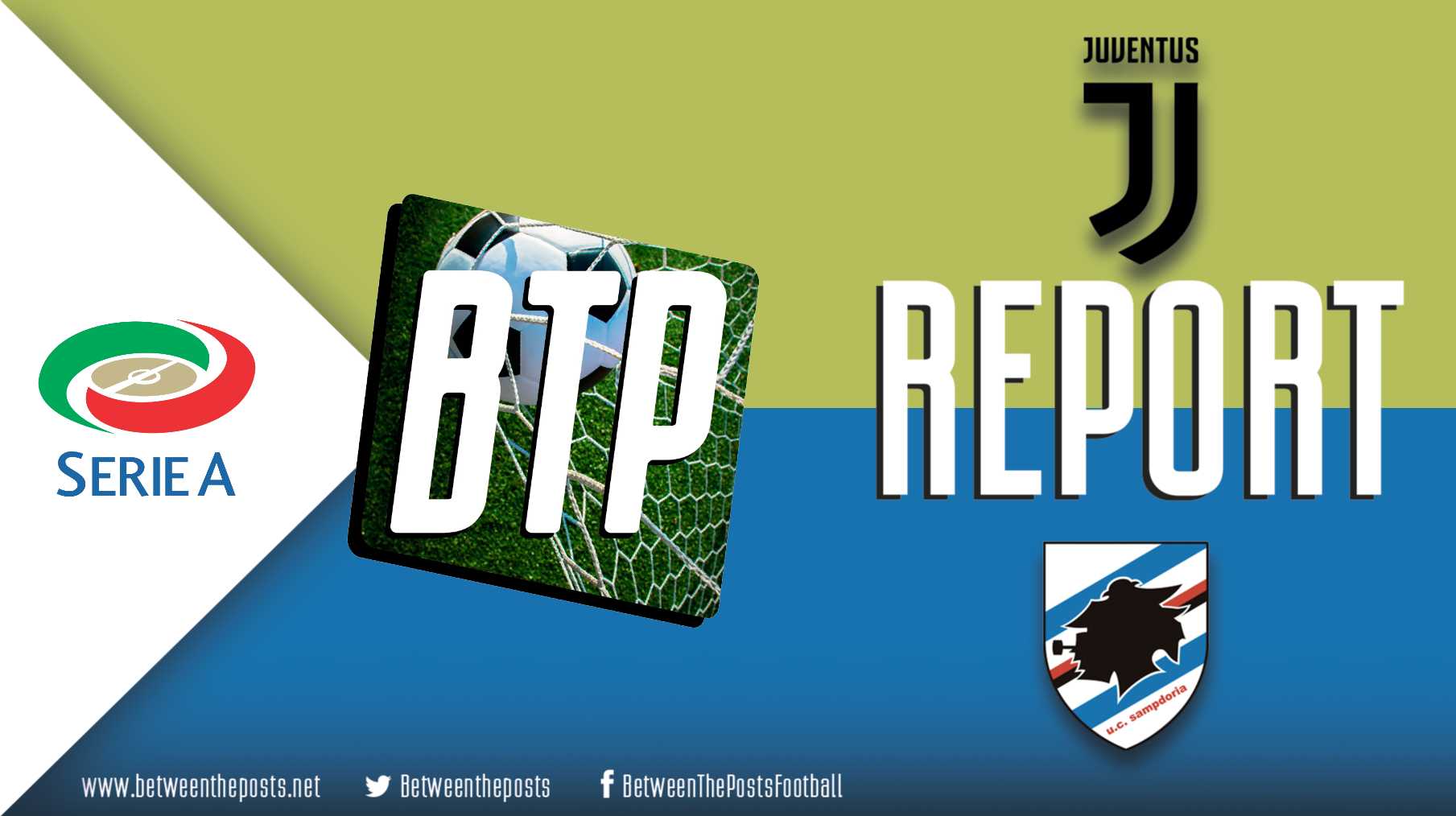