Once again, Juventus struggled to create chances, this time against a Milan side that efficiently pushed Sarri’s defense back and went close to taking the lead on multiple occasions. Only the substitute Paulo Dybala put the visitors’ hopes to bed when his shot hit the back of the net, leaving Pioli’s men empty-handed.

In the last eight years, Juventus versus AC Milan has slowly lost the prestige it once held. When Antonio Conte’s Juve dethroned Massimiliano Allegri’s Milan, the two sides took opposite paths. Juventus now sits at the top of the food chain whereas year after year Milan sinks deeper into oblivion, as past glories become a vague memory.

Fourteenth in Serie A, just four points above 18th-placed Sampdoria, Stefano Pioli’s were relegated to a state of confusion, lost in the standing’s deep waters. Unaware of how to climb up the chain and escape the vortex of losses and despair, Milan fans await for a beam of light at the end of a tunnel that only looks to be getting longer after each defeat. In a run of four games against some of the league’s big fish, the new manager has only collected one win – to an underwhelming SPAL side – while failing to leave a mark in any of the other games. Therefore, any expectation with regards to the game against Juventus seemed extremely far-fetched prior to the encounter.

Compared to Juve’s previous game, Maurizio Sarri made quite the changes. Juan Cuadrado came back into the eleven after missing the Champions League tie against Lokomotiv Moscow due to suspension, Rodrigo Bentancur started ahead of Sami Khedira, Federico Bernardeschi supported the strikers instead of Aaron Ramsey whilst Adrien Rabiot and Daniele Rugani were left out for Blaise Matuidi and Matthijs de Ligt.

Pioli, on the other hand, only made two changes, as Andrea Conti and Suso stepped in for Davide Calabria and Samu Castillejo, still in the customary 4-3-1-2 shape off the ball, which turned into a 4-2-2-2 formation in possession.

Juventus focus on the right

Juventus showed their intentions of developing possession on the right from the very start, where the players strongest on the ball all came together. Cuadrado, Miralem Pjanić and Bentancur all combined to create breakthroughs to feed the attackers. Juventus were quite willing to switch the play if space was not available, though, and a testament to the fluidity of play were Ronaldo’s movements, which often brought him to the right side to combine. However, Milan 4-3-1-2 shape focused on covering the center, with Hakan Çalhanoğlu man-marking Pjanić, vastly compromised the home side’s intention.

When Juve reached the flanks, the fullbacks were forced to play vertical passes into the drifting strikers, which stretched Juve’s attacking lines making their possession spells unstable and ineffective. 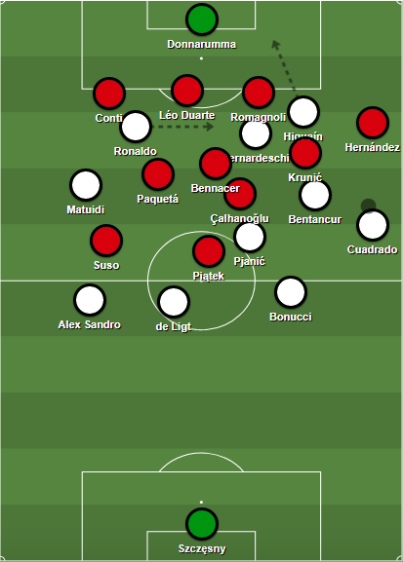 Conversely, Milan were faced with a way of pressing that saw the strikers press the center-backs and the attacking midfielder mark the pivot. Behind them, the central midfielders stepped out on the fullbacks. Initially, the visitors were hardly ever able to progress the play and were either forced to play long or look for individual solutions. Theo Hernández usually attempted to bring the ball forward by carrying it past the lines of pressure, but he would eventually crash into Juve’s wall.

However, as the game progressed, the pressing got inconsistent as a result of Milan’s orchestrated plans. Since Bernardeschi had to mark the ball-near pivot from Milan’s 4-2-2-2 shape, one inevitably remained free; consequently, whenever Milan could switch possession fast enough, they would create opportunities to access the free midfielder. 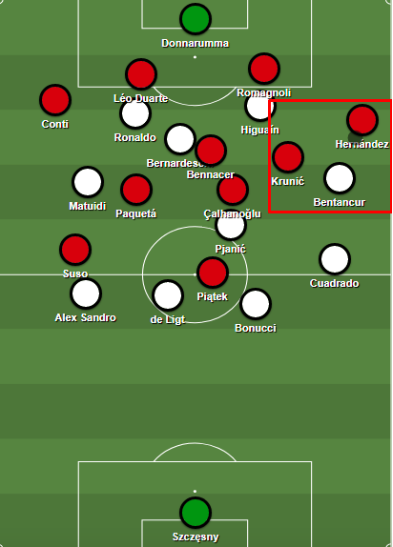 Bentancur is constantly caught in two minds, asking himself whether to step out on the pivot or on the left back.

Once Milan did so, Juventus would be pushed back and Milan could repeatedly switch the play to attempt to take advantage of the home side’s narrow defensive shape in a 4-3-1-2.

With around a quarter of an hour played, Milan had the first big chance of the game when Suso, relieved from any form of Juve pressure, crossed an outswinger into Krzysztof Piątek, who missed a scoring opportunity he should have buried past the goalkeeper.

Despite not taking the lead, Milan came up on top in the first half as a result of the marking of Pjanić, and the central compactness that prevented Juventus from finding openings into Milan’s defensive structure, consequently triggering technical mistakes.

Juve’s dark magic once again wins them a match

The start of the second half showed once again, after the first half’s viewings, how Juve’s offense in this game was more about creating chances on the counterattack than through disorganizing the opponent’s defensive structure with clever movement and rotations. Thus, in the fiftieth minute, Maurizio Sarri reacted by subbing Paulo Dybala in for an uninvolved Cristiano Ronaldo. Shortly after, in a game that needed a spark, Douglas Costa also came in for Bernardeschi and Pioli reacted by putting on Giacomo Bonaventura for Krunić.

Immediately after the substitution, Milan switched to a 4-2-3-1 shape, with Hakan Çalhanoğlu on the left wing and Bonaventura as the attacking midfielder, both with and without the ball. While in possession, the Italian could occupy one of his many natural positions as opposed to Rade Krunić, a midfielder, having to play wide.

Without possession, Pioli’s side should have maintained the same intensity from the first half when marking Pjanić, something the Turkish winger could not do anymore due to fatigue. Although the intentions made sense, the implementation was not as effective as the manager hoped. Bonaventura often followed through the pressing on the center-backs, leaving Pjanić unmarked behind him and allowing Juve to progress the play through their regista.

Despite the changes, Juve could not create the chances Sarri hoped in, which pushed the manager to bring in Adrien Rabiot for Matuidi, in order tosupport the left side.

Eventually, after seventy-six minutes during which Juventus were unable to access the center, Douglas Costa initiated a central combination between Higuaín and Dybala. The Argentine, faced with a one-versus-one against Alessio Romagnoli, effortlessly dribbled past the defender and buried the ball in the left bottom corner with his weaker foot.

Even after taking the lead, though, Juventus never looked in control of the game, similarly to the way the pattern throughout the course of the game accurately described Juve’s flaws. The defining example of Juve’s struggles against Milan’s possession can be described through one frame from the ninety-third minute. After a weak pressure was bypassed, Juve quickly recollected all their men behind the ball, forming a 4-5-1 shape to preserve the lead and carry their win over the finish line, showing Sarriball is still far out of Juve’s reach, for now.

High praise must go to Milan for forcing Juventus to divert from their principles, something that has occurred far too often in the last month; and as each game goes by, Juve’s regression in all phases looks more evident.

Whereas previously poor performances in possession had been compensated by high volume chance creation, now the goalscoring opportunities are getting fewer by the match.. Moreover, when the defense had finally seemed to have adapted to Sarri’s instructions, problems have started to emerge in pressing phases, consequently exposing the defenders. The more time goes by, the fewer certainties Juventus can boast. Only the players’ individual ability gave a slow attack the needed boost to win the three points against a Milan side that unexpectedly held their own and probably deserved more. Something must be done unless Juve want to follow the same downfall Sarri’s Chelsea experienced.

On the other hand, if Pioli’s men can build on their performance in Turin, all hope might not be lost for Milan. 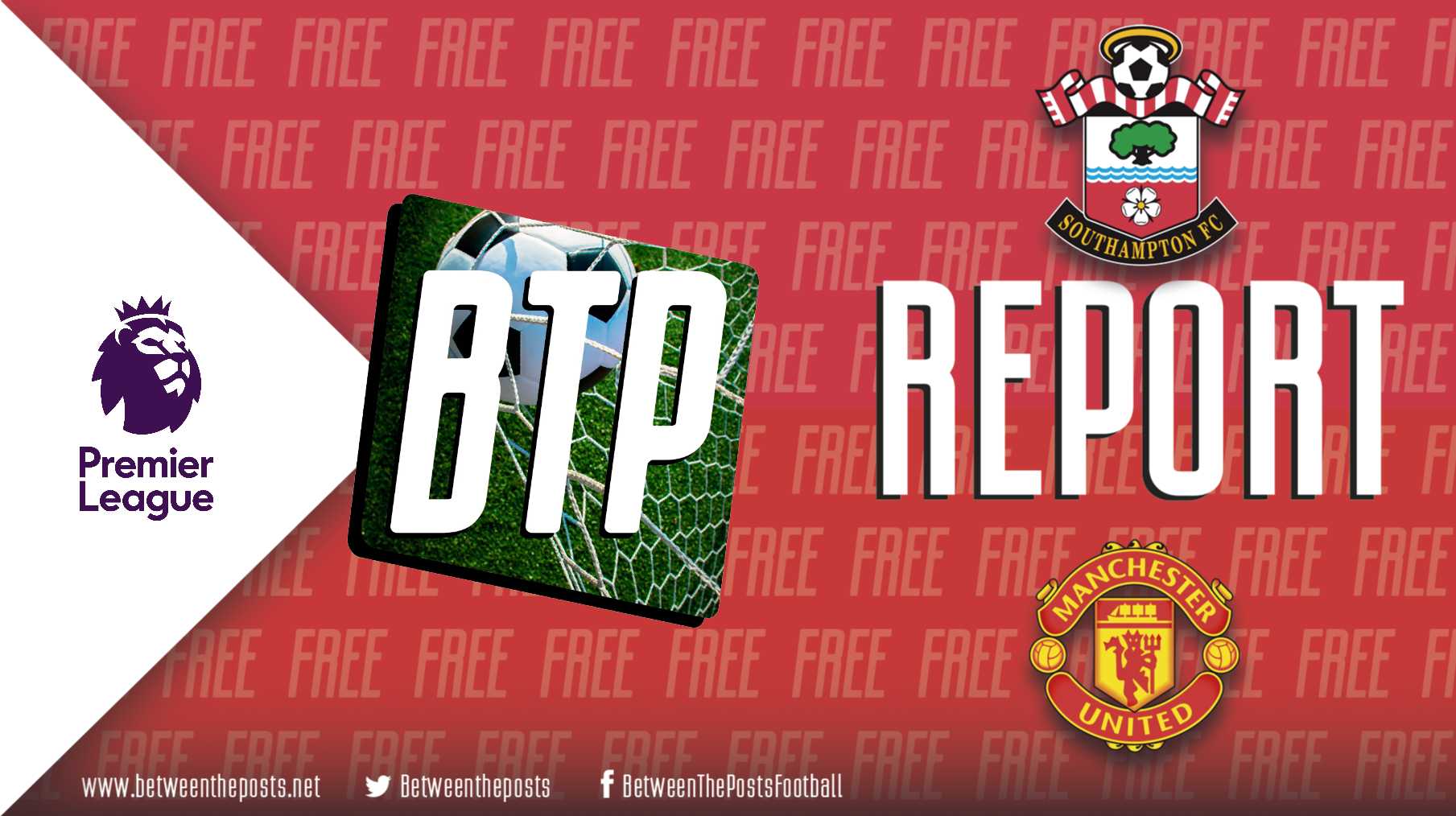