Juventus had to fight until the end, but still the Serie A win over AS Roma was relatively straightforward for them. Their collective and individual superiority was there for all to see. Patrik Schick had a rough old time up against veteran defender Giorgio Chiellini whilst Roma’s defense could not handle the aerial prowess posed by Mario Mandžukić and Cristiano Ronaldo.

Allegri made two changes to the side that earned a similar 1-0 victory in the Turin derby last weekend. Wojciech Szczęsny came in for Mattia Perin and the talented Argentine midfielder Rodrigo Bentancur replaced Emre Can.

Edin Džeko was still not deemed fit enough to start for Eusebio Di Francesco’s Roma side. The under-pressure manager fielded two changes, with Justin Kluivert replaced by Schick, and Juan Jesus by Aleksandar Kolarov. The manager maintained the three-at-the-back setup that earned them an eventful 3-2 victory at home to Genoa last week. This time, however, instead of a 3-4-3, it looked much more like a 3-5-2 formation – Schick being the target man. 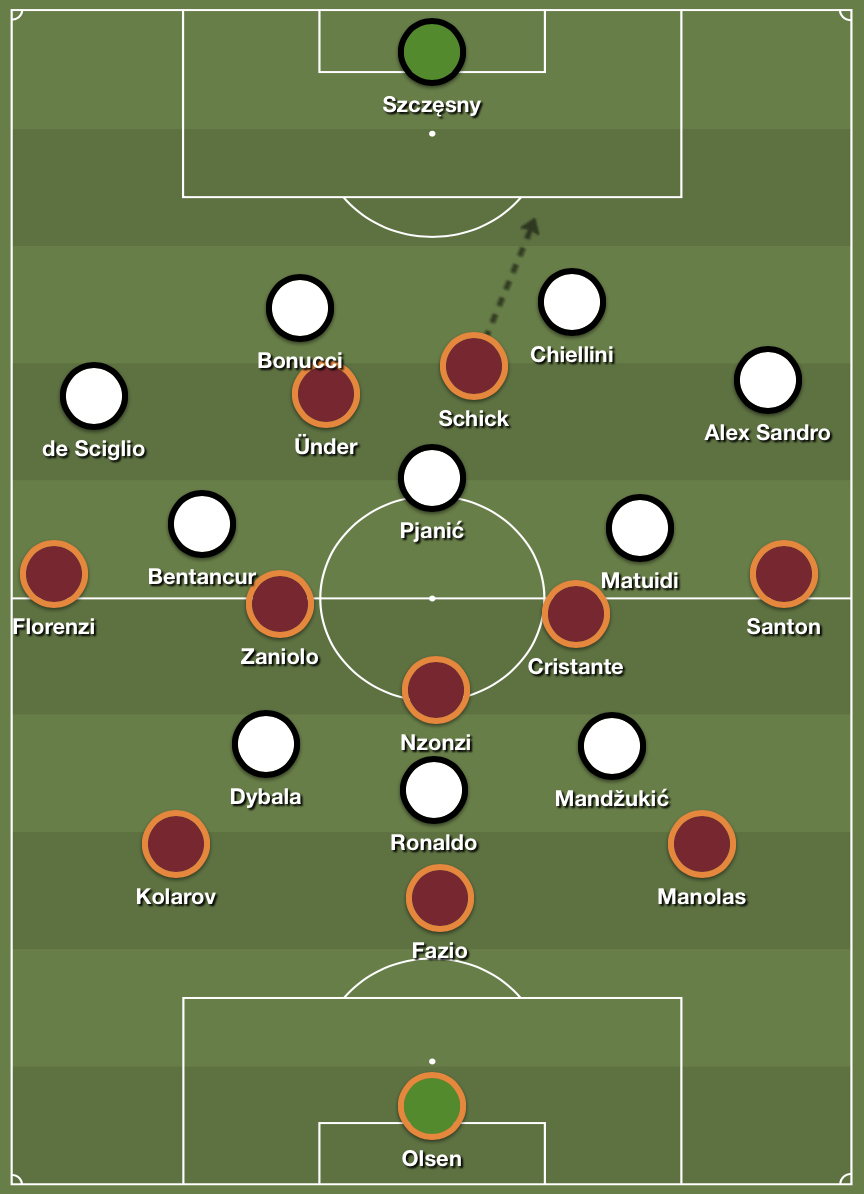 Di Francesco’s straightforward 3-4-1-2 defensive structure simply aimed to man-mark Juventus. In the opening phase of the match, Roma pressed as high as they possibly could and were impressive, not only in their aggression, but in their organization too.

The problem for Roma was that Juve always seemed to have an answer, even if it was not a concrete one. The Juve players were generally quite good at receiving and recycling in incredibly tight spaces, when this was not a possibility, they did not shy away from pumping it long. No matter how many times a Roma player got tight to a Juve opponent and made a solid challenge, the latter would always come out with the ball at their feet.

For Juventus, there were multiple benefits to having Mandžukić and Ronaldo in their side, the main one being their dominance in the air. It was not just that, though, it was also the support they had. Blaise Matuidi and Bentancur – the two advanced central midfielders in Juve’s nominal midfield three – would always look to get up in support of the strikers to provide additional runs.

Juve’s success was not just about the support, though. It was also the specific positions each striker took up. Both Juve center-forward alternated positions to ensure that one of them would always position himself wide on the left.

By having their physical striker assert their aerial dominance in the channel between the wide center-back and wing-back, Juventus could really stretch Roma’s back-three with targeted long balls. And, with balls being played long and into a wider area, there was little risk of Roma regaining possession and suddenly springing a dangerous attack. 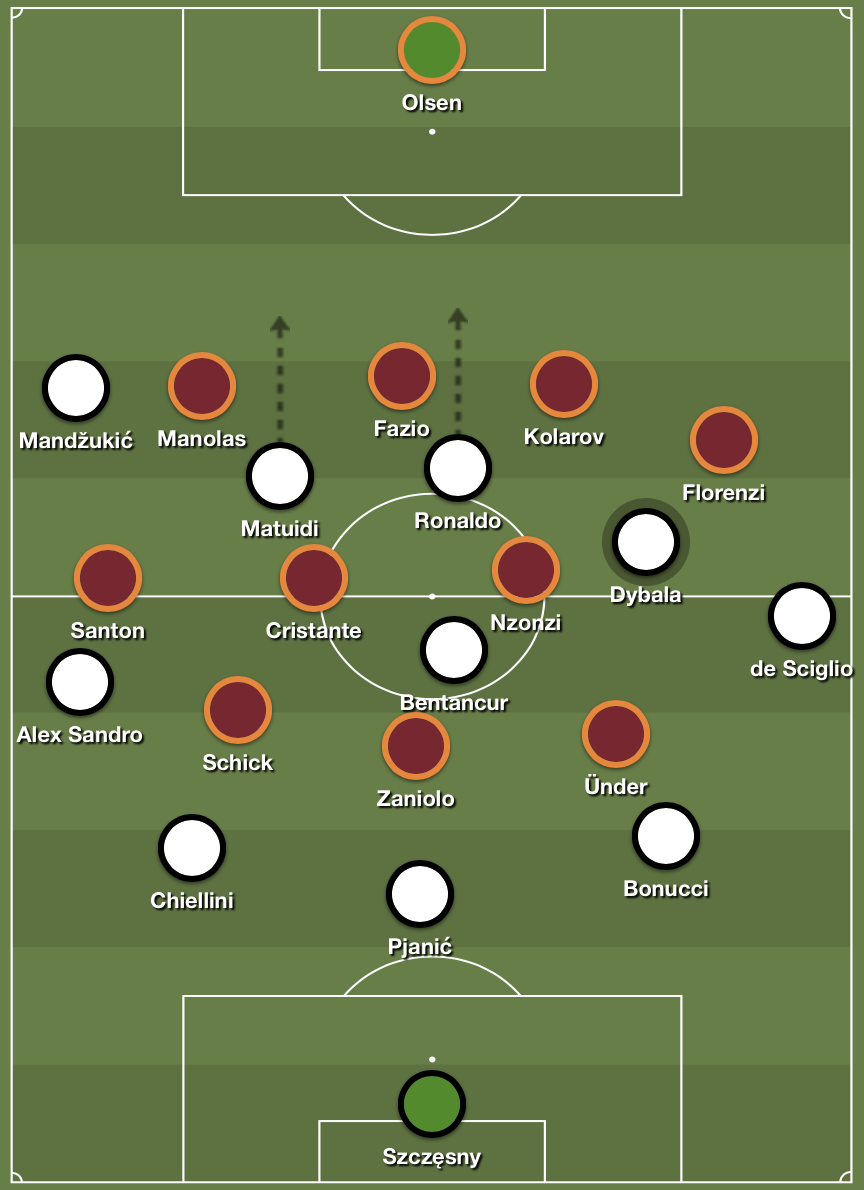 Juve’s asymmetrical 3-5-2 formation that aimed to use long balls into the channels.

Apart from this direct approach, Juve also applied more sophisticated ways of playing around Roma’s press. More often than not Miralem Pjanić would drop between the center-backs, to create a temporary back-three. Against a then 5-3-2 defensive shape, this allowed for a comfortable overload that enabled Juventus to recycle the ball more freely.

The same was also done through Mattia de Sciglio whenever Juve moved play from left to right. The fullback would drop very deep – almost alongside the center-backs – to receive. De Sciglio’s backward movement had an interesting effect, as he often drew out an opposition presser. This increased Juventus’ chances of finding an open a passing lane inside, and also helped secure Juve against counterattacks. De Sciglio’s now-deeper positioning would prevent Juve from being exposed to potential two-versus-two scenarios, if ever Roma won the ball high up the pitch.

In carrying with this, Juve also constantly looked to the channels in order to beat Roma’s press. They achieved this by having the advanced midfielders so high up the pitch that they could provide overloading runs between the Roma defenders.

In particular, when either fullback received the ball, that was the cue for all five attackers on the last line to dart in behind. Matuidi did go clean through on goal at one stage but the ball got tangled up in his feet and he was later deemed to have been offside.

However, this long ball approach continued to provide success in the form of a goal. This time it was De Sciglio offering the run. Leonardo Bonucci had no trouble picking out a diagonal pass to the fullback. Juve did lose the ball from this initial pass, but were once again excellent in their defensive battles. Bentancur pressured well to quickly regain possession as De Sciglio pounced on the opportunity to whip in a far-post cross that met the head of the towering Mandžukić. 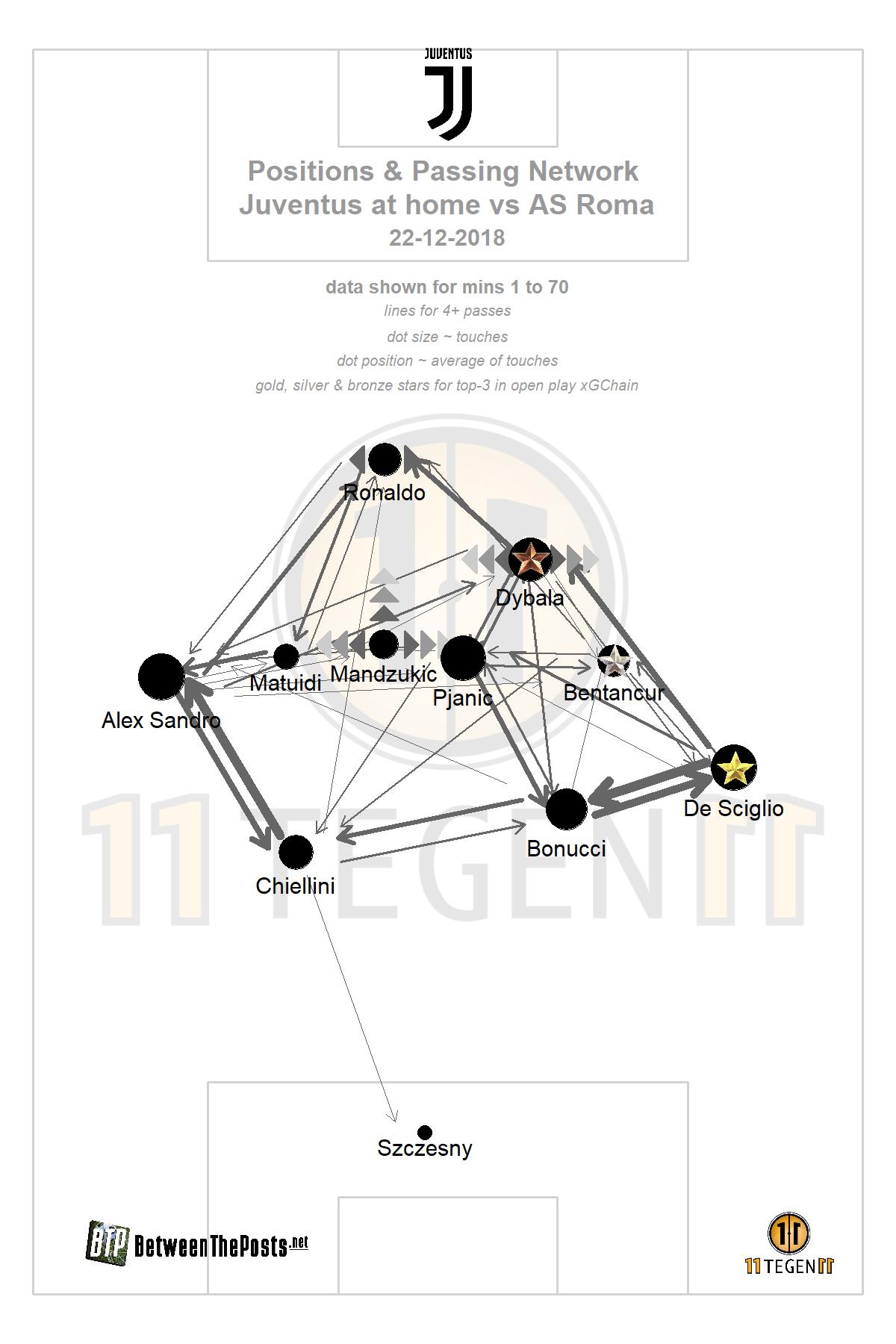 Juventus’ passmap illustrates how much positional freedom all three attackers enjoyed – Mandžukić in particular moved all over the place.

Roma had only managed to create one dangerous situation from their press in the first half. Schick dispossessed Chiellini on the last line before being shepherded back wide as Roma barely managed to get a shot away from range. From longer possessions, Roma were barely able to fashion any goal scoring chances.

With Roma’s 3-5-2 shape, the forwards and midfielders were all matched positionally to the Juve players. Isolating player-for-player can be a good thing in certain situations, but not necessarily when you are up against players who can all outdo you in one-versus-one scenarios.

This situation made life hard for Roma’s wing-backs, too. Whenever they received the ball, all the options inside were now far too close to the Juve defenders to be accessible. Without a wide player capable of taking on their man, they were easily dispossessed by the looming pressure of the Juve fullbacks and central midfielders on either side.

The strength of Juve’s defensive traits could be seen all throughout the team. The midfield never shied from pressing right up the pitch, whether it left an acre of space behind them or not. They all trusted each other to quite an extreme level and had the awareness to know which players were around them and therefore when to press and when not to.

It was also a great credit to their hard-working midfield that, in their 4-3-3 shape – which in Ronaldo and Dybala featured wide forwards without much onus on them to defend – they never had any issues coping with Roma’s offensive threat whatsoever. 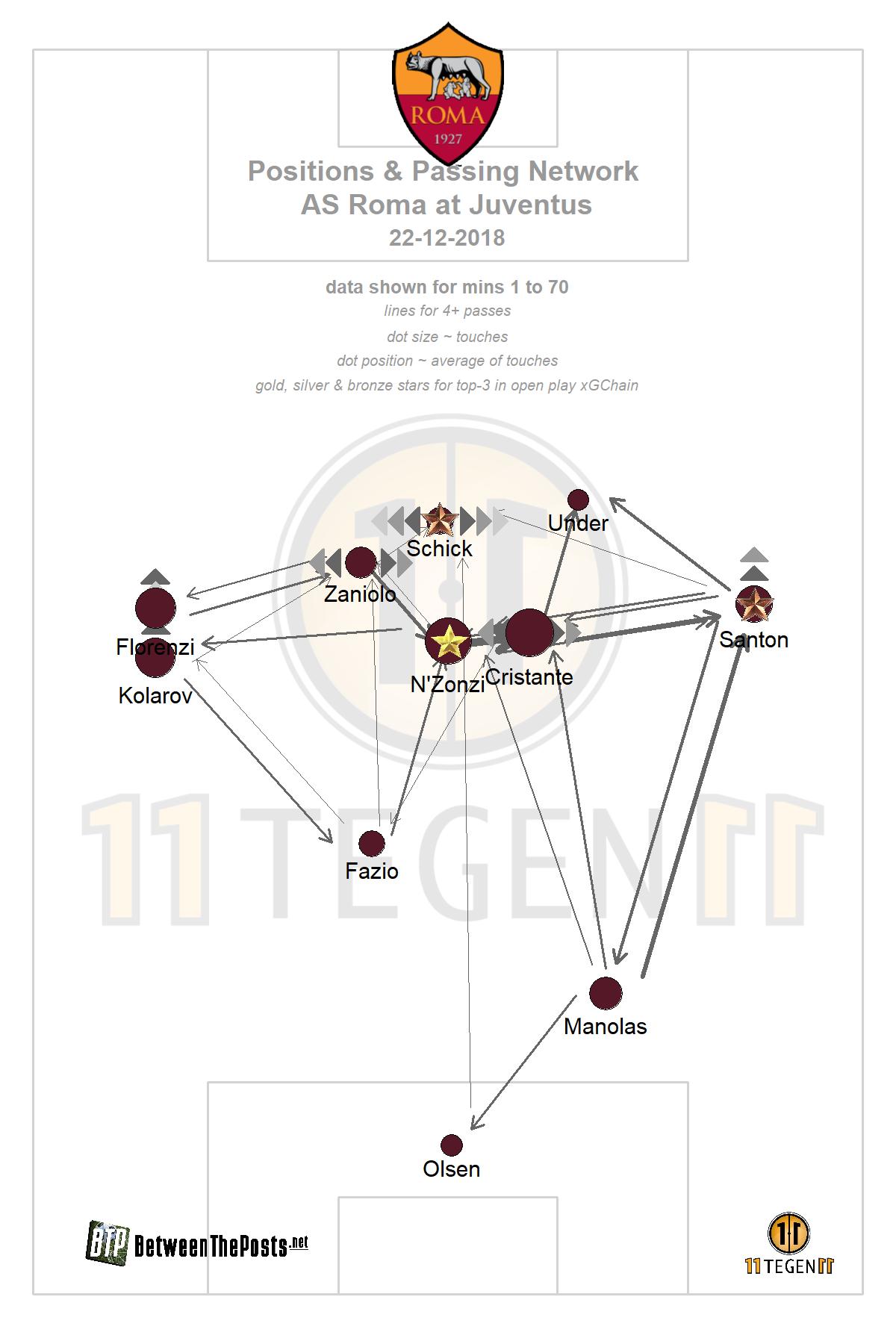 Although Roma’s passmap shows their central midfield saw a lot of the ball, most of their play happened outside Juventus’ defensive block.

Heading into the second half, Di Francesco made the call to bring off Florenzi for Kluivert. This saw Roma switch from a 3-5-2 formation into a 4-4-2 or, in possession at least, a 4-2-3-1 shape.

Instantly, the positive impact was clear. The doubling up on either wing and the fact that so many players were dropping to the ball, away from already-advanced positions, allowed Roma to connect play from side-to-side and into the wings much more frequently.

In the opening minute of the half, Zaniolo dipped into a pocket inside Juve’s midfield line and took a short burst into the space now opened up in front of the box. Aiming for goal himself, he saw his shot blocked by Chiellini – who had been a nuisance for Roma all night.

Allegri was also quick to tweak his tactics in reply to Roma’s adjustments. Most likely in direct response to Di Francesco’s changes, the Juve manager asked Mandžukić to drop in and create a 4-4-2 shape in defense, meaning the home side improved their coverage on the flanks, where Roma started to dominate.

Juve became progressively defensive throughout the second half. Moving to the aforementioned 4-4-2 shape, then to a 4-5-1 with Paulo Dybala dropping into a wide-midfield role as well – shortly before substitute Douglas Costa took his place there. Towards the end, Mandžukić even popped up in a wing-back position.

Although Juve’s retreat handed a territorial dominance to Roma, the visitors were never really threatening. A bombardment of inefficient crosses followed – twenty-one of Roma’s twenty-four crosses in the match came in the second half, only five being completed.

Despite Roma’s improved stance, Juve certainly were not pinned in. They were still the far more threatening attacking outfit of the two.

Just before the hour mark, the aforementioned long ball approach into the channels saw Bentancur get into a good position to lay it back to the onrushing Dybala. The Argentine’s angled cross found Ronaldo, who had a free header, which was then saved by Robin Olsen before eventually going out for a corner. The resulting set piece allowed Ronaldo a second bite at the cherry. A near-post knock-on found its way to his feet as he attempted to volley it in but he fired straight at the Swedish goalkeeper.

All in all, this was another close, but comfortable victory for Juventus. The best team in Serie A is now up to seven consecutive wins since their only drop of points this season, to Genoa. The last five wins have been with clean sheets, the most recent three finishing 1-0. While these score lines could suggest close encounters, this is anything but true.

Despite their high hopes coming into the season, Roma are having a very problematic season. Last season’s Champions League semi-finalists find themselves in tenth place, though admittedly only four points separate them from fourth. A long battle for Champions League qualification awaits, with many Serie A teams looking good, if not better. 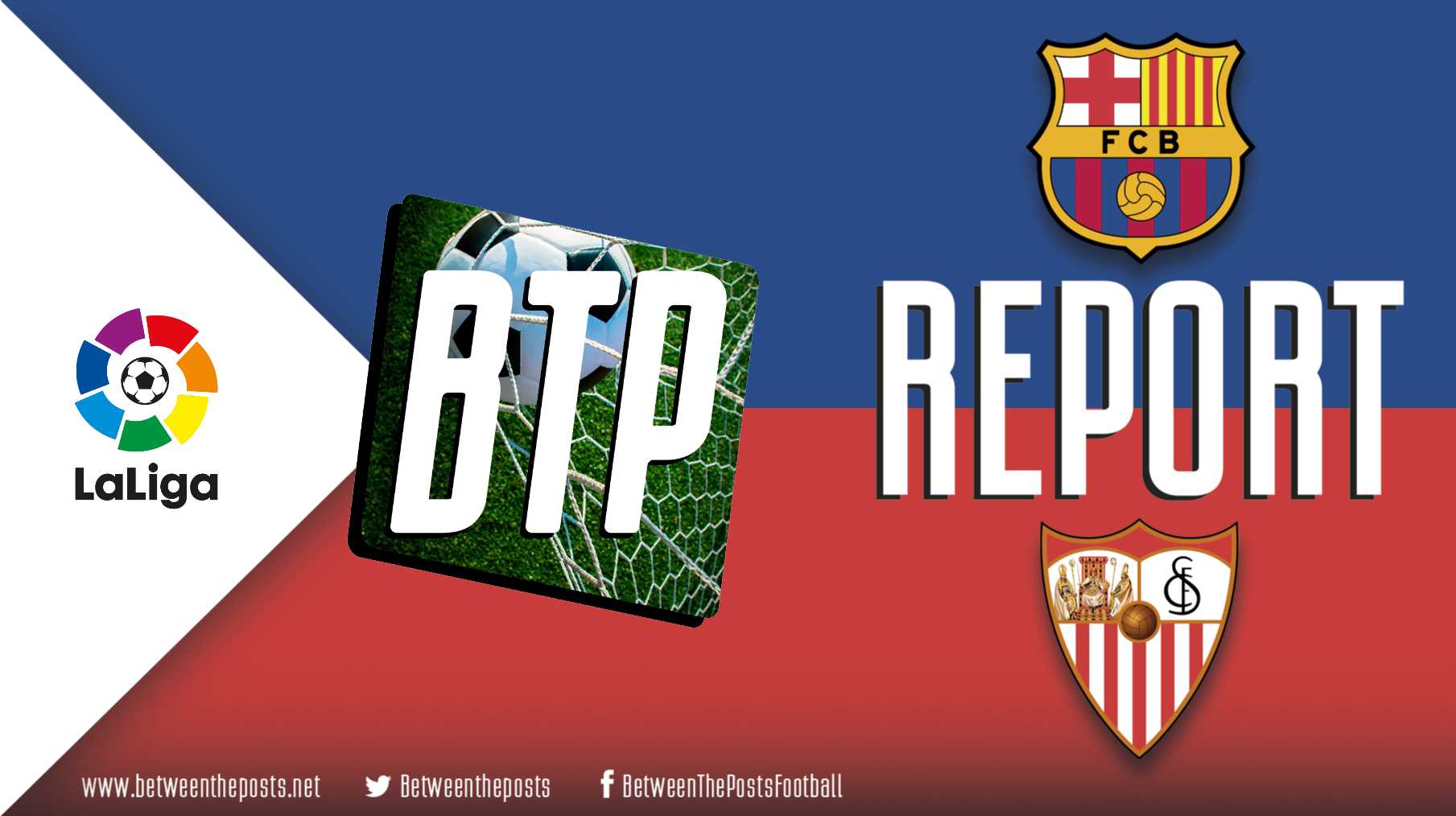 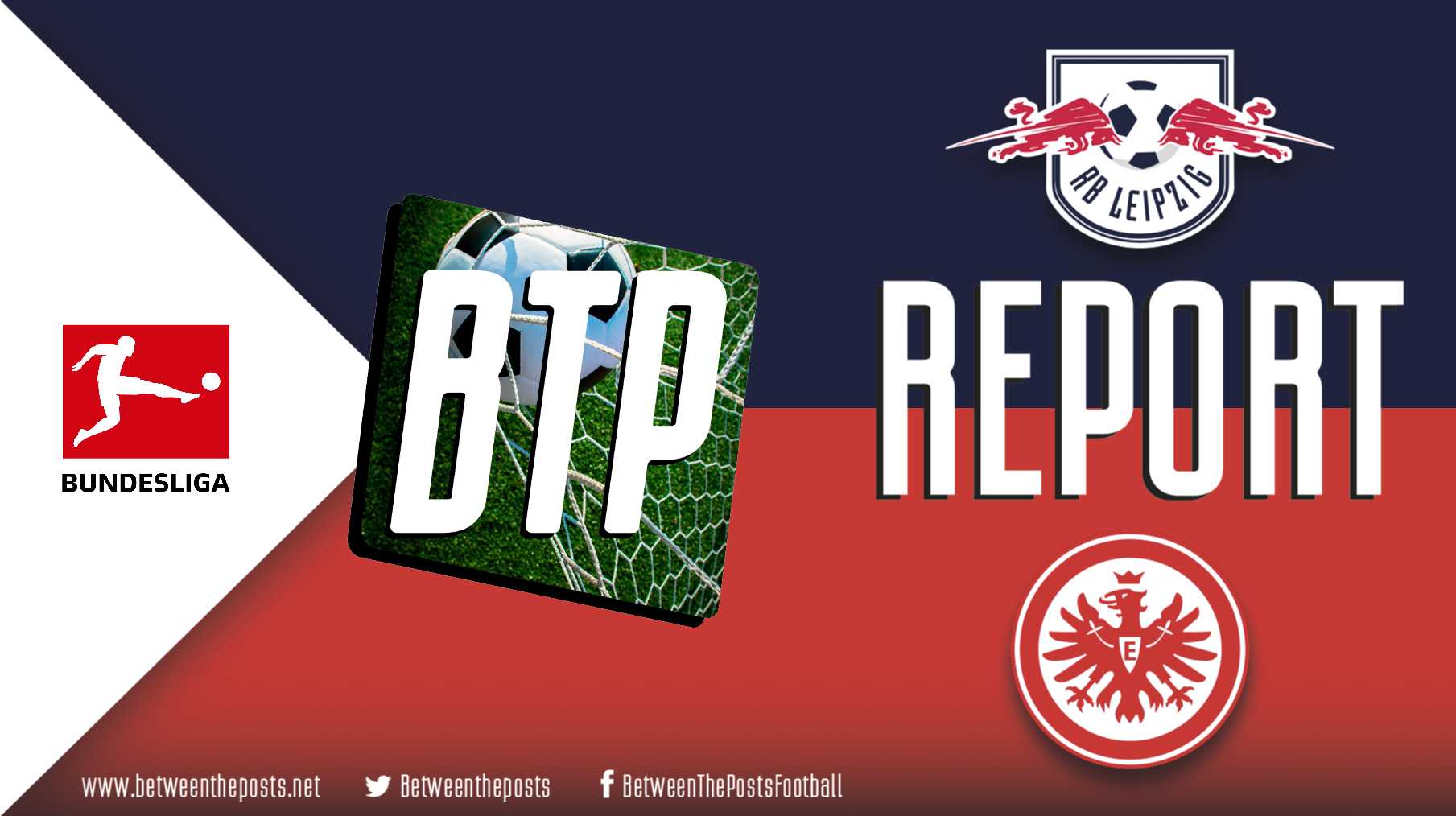