Juve found no escape routes from Atalanta’s ferocious marking, which nullified Juve’s attacks until two penalties came to the rescue. Once more, Atalanta proved that they are a worthy challenger of any team, as Gasperini’s gift keeps on giving.

After crumbling to a Milan comeback three days earlier, Juve could not afford another mistake, as a defeat to Atalanta could have reopened the title race with just six games remaining.

Giampiero Gasperini’s men sat nine points behind the league leaders, and have undoubtedly been the most in-form team post-lockdown, winning every single game since the restart and spreading a sense of being unstoppable.

Maurizio Sarri surprisingly decided to bench Miralem Pjanić – a decision the manager explained being forced by a minor injury – starting Blaise Matuidi in midfield instead, as Rodrigo Bentancur acted as the defensive midfielder. In defense, Matthijs de Ligt came back to restore order after being out against Milan due to suspension, as did Dybala in attack, replacing Gonzalo Higuaín.

Gasperini also could not count on a key component of his eleven, as Robin Gosens was announced unavailable due to injury shortly before the start of the game. Timothy Castagne thus replaced the left wing-back, as José Palomino also made his way in defense for Mattia Caldara.

If the game were to be summed up in two tactical scenarios, it would be hard to escape the contrast in strategic executions between Atalanta and Juventus. On the other hand, the level Gasperini’s men have attained is none other than the result of a consistent and clear methodology that paved the way for current successes, something Sarri has not been able to establish yet.

Nonetheless, given the resources at hand, it is understandable to see why one would expect more from Juventus, especially when the view offers a carbon-copy of the past which the board had so eagerly parted ways with.

Atalanta’s football is as ruthless as a lion hunting for its meal, with in this case Juventus as the unlucky bianconero zebra left behind by the herd. Starting from the pressing, Atalanta gave their opponents no chance, even though the strikers did not press too aggressively. All they needed was Juve to fall victim to their own choices, as the midfield composition indirectly affected the possession phase. 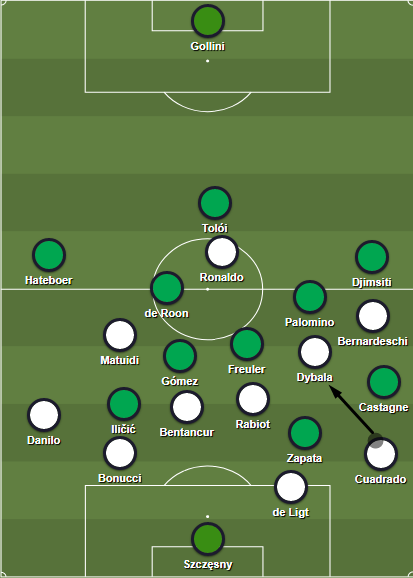 Whenever Rodrigo Bentancur plays as the interior, he rotates heavily with the winger and attacker, either providing width occasionally or attacking depth down the halfspace If you divide the field in five vertical lanes, the halfspaces are the lanes that are not on the wing and not in the center. Because there is no touchline like on the wing, players have the freedom to go everywhere. But this zone often is not as well-defended as the very center. This makes it a very valuable offensive zone to play in and a lot of chances are created by passes or dribbles from the halfspace. depending on Dybala’s position. With Adrien Rabiot in that position, Juve could not benefit from the same contribution, since the Frenchman instinctively attacked depth, offering no option down the halfspace. Even when the midfielder received the ball to his feet, he would immediately orient his body to the center, cutting inside and turning the possession horizontal.

Juve were thus left with no options to progress the play other than direct passes to Dybala, which the Argentine struggled to control due to José Palomino’s aggressive marking.

So, in the sixteenth minute, Dybala found himself in just one of countless situations wherein he had to act as the target man. Federico Bernardeschi played a pass to him which Remo Freuler won off the striker before he could control the ball. The ball then rolled towards Papu, who first fended off Bentancur’s challenge, and then combined with Zapata to assist the Colombian for the lead. Seventeen minutes in, and Juventus found themselves one goal down, while Atalanta had retained 72% of possession.

Juve failing at the principles

Unable to build up slowly and move past Atalanta as Sarri would have liked, Juventus were forced into direct passes into the strikers.

Juve could even benefit from a potential advantage created by Atalanta’s man-marking strategy. Due to Bernardeschi’s wide position on the right, Juve could stretch the opposition back three by drawing Berat Djimsiti wide and opening the halfspace for Dybala to receive. However, just like the other game situations, the hosts lacked an adequate structure to exploit this scenario. Consequently, they were only able to take advantage of the halfspace when Dybala individually dribbled past Palomino and evaded his aggressive defending.

Ultimately, Juve’s possession became the opposite of Sarri’s principles, with an over-reliance on individual actions and long-balls behind the defense to attack Atalanta’s high line. 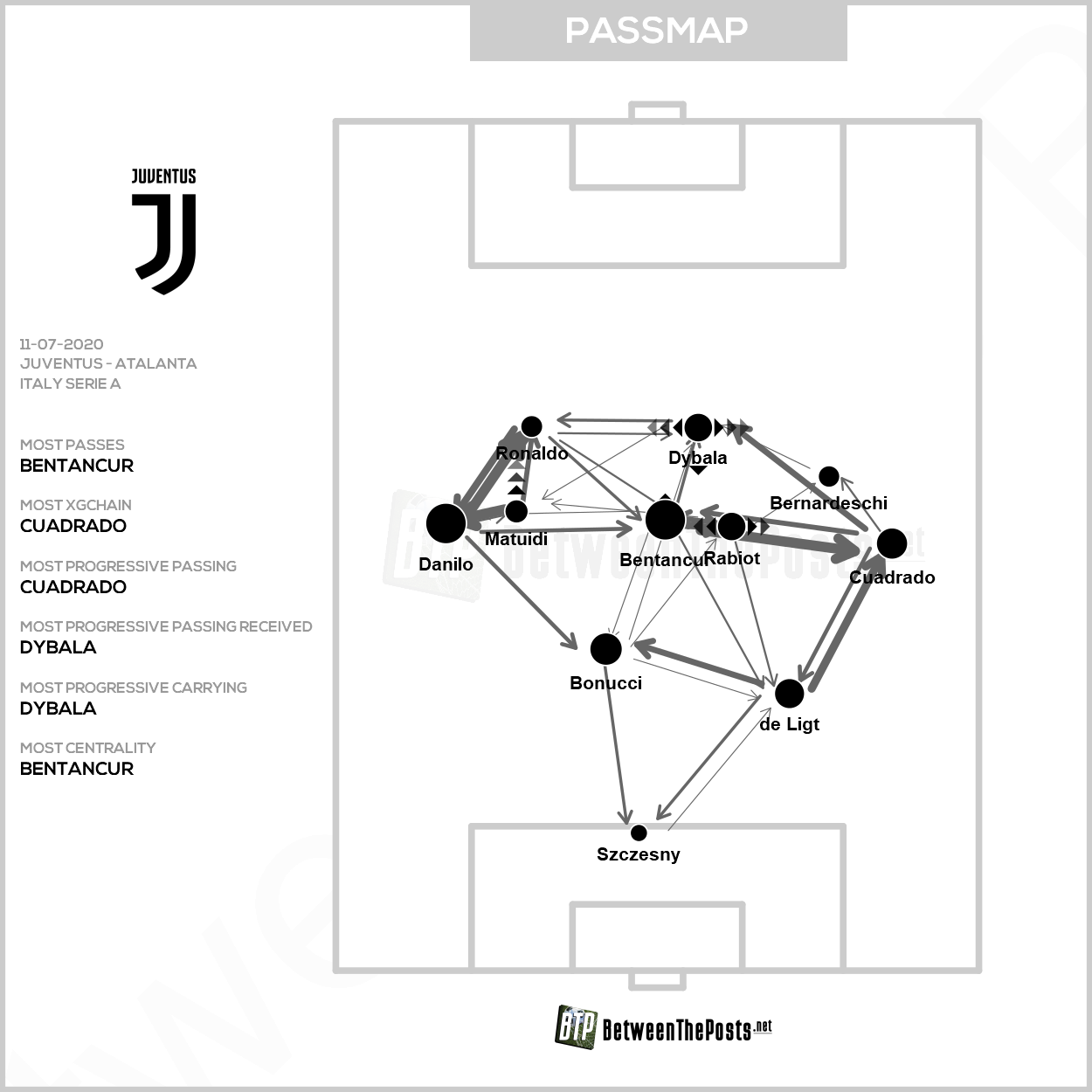 Only in the second half did we see a more patient buildup from Juventus, with Rabiot sitting deeper next to Bentancur, aiding the play out of the back.

Nevertheless, the hosts still remained quite rooted to direct passes to the strikers due to limited rotations. This also explains Sarri’s substitution of Dybala for Higuaín, as he sought for a target man capable of playing quick first-time passes as opposed to holding onto the ball after having received it.

Even in possession, the two teams’ approaches could not have been at opposite ends of the spectrum. While Juve’s support around the ball was very poor, Atalanta clearly built their success around overloads When one team has more players in a certain area or zone than the other team. down the wing. 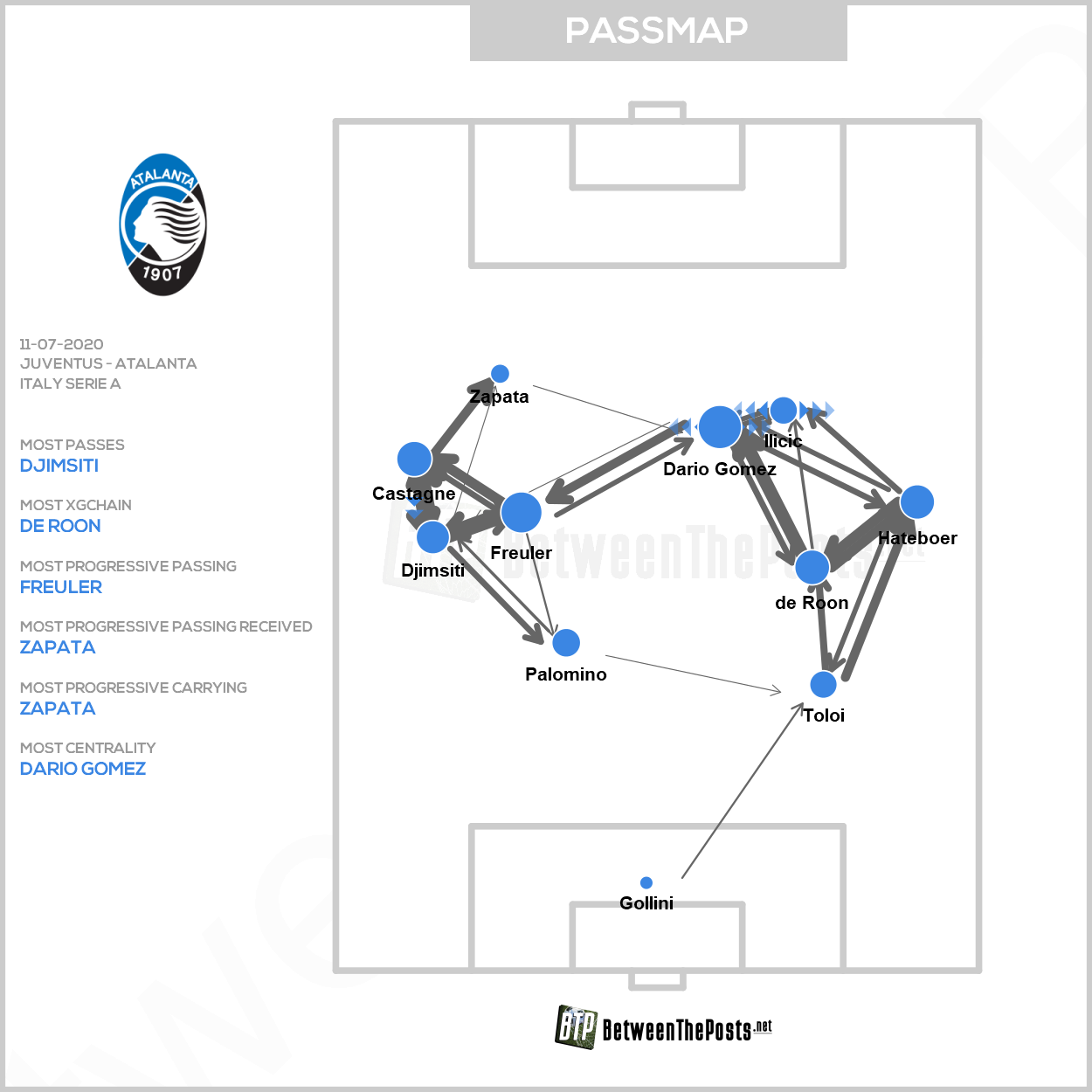 At least three players could be found around the ball, with at least one providing width, and one providing depth. Every channel would be occupied to guarantee enough options around the possession, while Papu Gómez sat in the center, awaiting a pass to switch the ball to the opposite flank. And then the cycle continued, as Atalanta continuously pulled Juve out of position to attack the vacated area, whether it be on the ball side or far-side.

In the diamond-shaped passing connections Atalanta created across the wings, they possessed every requirement to a successful buildup: depth, width, support inside and cover. 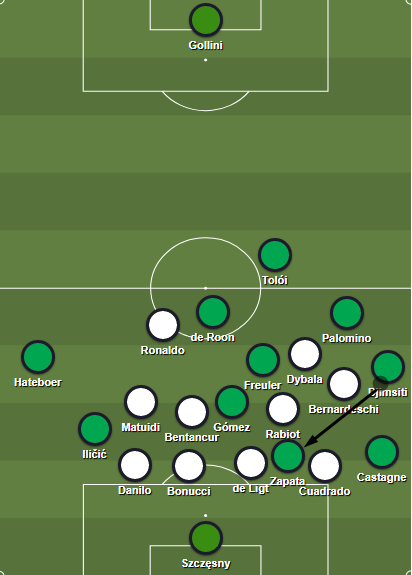 Atalanta’s wide overload and occupation of every vertical lane.

The occupation of every vertical lane was also key to Atalanta’s second goal when Muriel played a pass across the edge of the box into Ruslan Malinovsky.

Atalanta’s midfield in their 3-4-1-2 shape was hardly ever challenged due to Juve’s strikers’ low defensive work rate, so whenever Papu or either of the sixes received in the center, they would have absolute freedom over their next play.

Juve’s 4-4-2 medium block A medium block refers to a team that retreats in their own half out of possession, generally only disrupting their opponents some way into their own half. passive approach contributed to the midfielders’ freedom as well, as players merely set up to follow the ball, repeatedly falling into Atalanta’s traps when spaces would be created inside the defensive structure.

Juventus were not even aggressive when shifting, which meant that they could be easily moved across the field without them ever posing a threat to Atalanta’s possession.

An example of this could be noticed when Juve’s wide players faced Atalanta’s overloads. The winger, fullback, and ball near six would shift to the wing while the ball far six sat deeper centrally to protect the backline. Essentially, this allowed Atalanta to pick out many spaces around the box, ooze in and out of Juventus’ structure, while the opponents committed towards the ball without actually closing it down.

Atalanta’s freedom was eventually reduced in the second half when Juve’s sixes started stepping out more aggressively on the ball to prevent the opponents from pushing them deep., Moreover, with Duvan Zapata acting as the target man, Atalanta could always rely on an option down the halfspace. The striker held up the ball and attracted bodies towards him before quickly releasing it to the nearby players in space.

Ultimately, a second penalty came to Juventus’s rescue, called for another short-range hit on the arm of an Atalanta player. Ronaldo confidently converted to cover up his stale open play performance with a penalty brace. 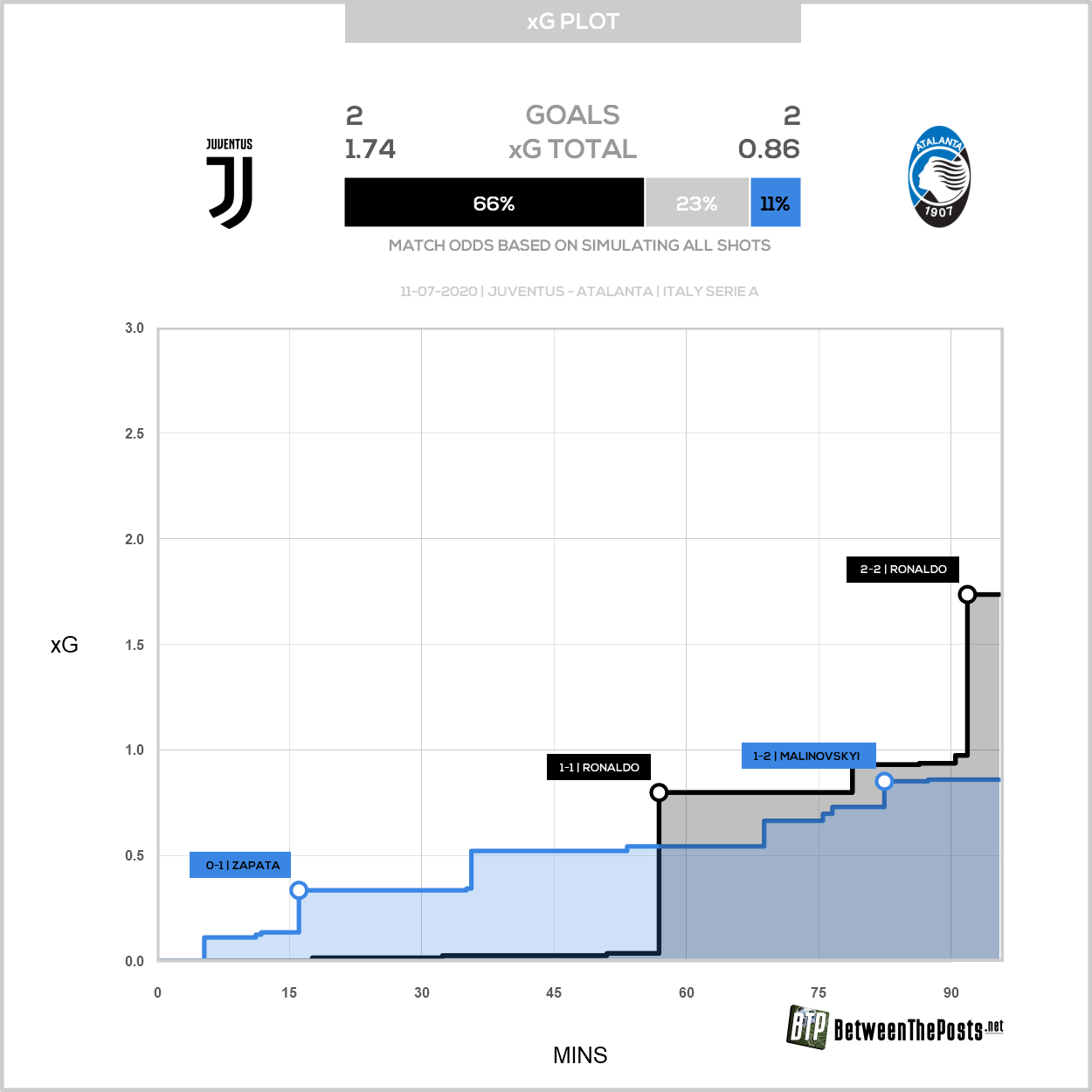 Atalanta find themselves at the peak of their powers, riding a streak that could very well see them win most of their games from now until the end of the league campaign. Were that the case, Juventus could be in big trouble. Their most recent display has once again exposed the weaknesses of a team that cannot seem to attain the needed consistency and still is highly reliant on individual brilliance and penalties to score goals.

The same consistency is what Atalanta manifested in each of their plays, following a textbook strategy that has seen them raise the bar each season, achieving what even the most optimistic would have never expected.

Sarri has not even completed his first season in Turin, and despite high expectations, is still living early days at his new club. However, even though he might cry for time, even Sarri knows that the clock can stop at any moment if mandatory results don’t follow, stopping a tactical project that feeds off time more than anything else. 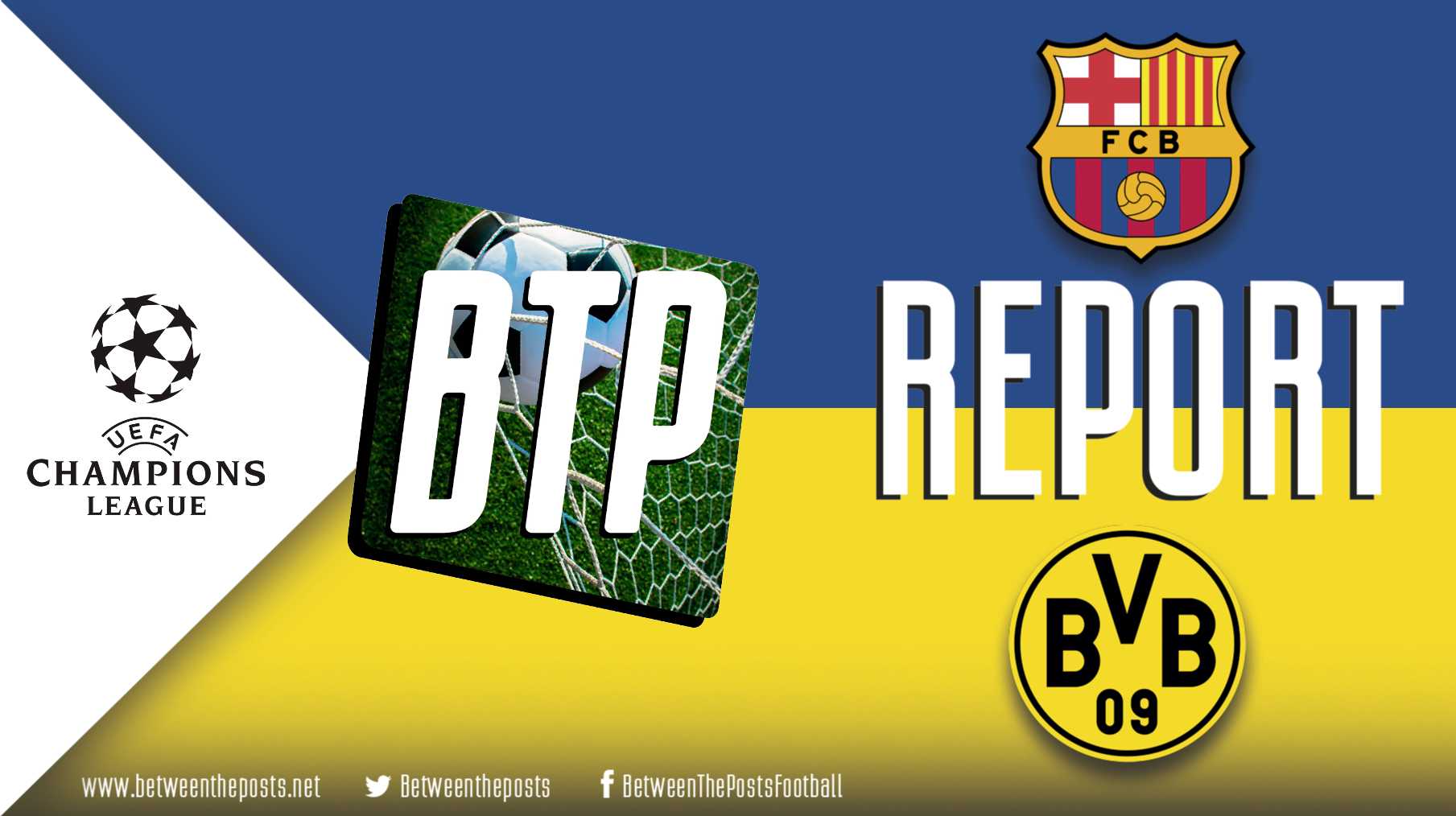 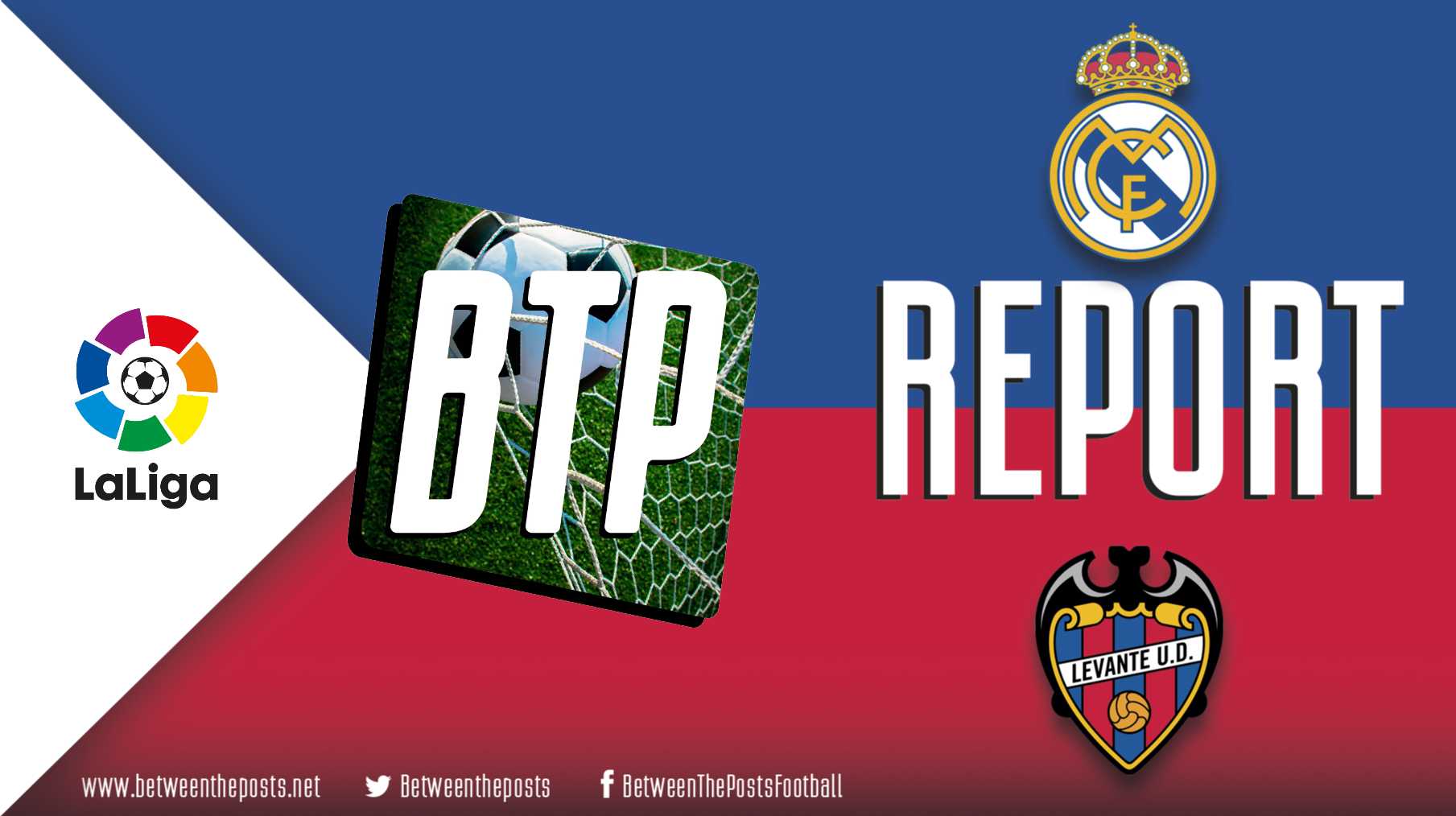