Whereas the first half had sporadically shown what this Juve side is capable of, after the break Maurizio Sarri’s men stepped up to put the game to bed in dominant fashion. Leverkusen were unable to respond, as Juve outclassed them in every department, often seemingly without breaking a sweat.

Juventus and Bayer Leverkusen faced off for the second game in Group D at a time they went through similar patterns of form. After unconvincing performances against Fiorentina and Verona, Sarri’s verdict on Juve pushed him to make changes. The 4-3-3 shape that had slowly lost its core – having fallen to the injury of a crucial player in Douglas Costa – was abandoned in favor of a lineup that featured more technicians along the field. This saw Sarri trace back the footsteps that led to his origins, after which he lined up Paulo Dybala and Aaron Ramsey at striker and attacking midfielder in a 4-3-1-2 formation that guaranteed additional presence between the lines against Brescia and SPAL. For this Champions League encounter, though, the manager surprisingly benched Ramsey and Dybala for Federico Bernardeschi and Gonzalo Higuaín.

Peter Bosz landed in Turin after losses to Lokomotiv Moscow and Borussia Dortmund that strongly undermined his team’s certainties. In recent weeks though, Bayer Leverkusen seemed to have found its way back on track by winning their last two games. However, questions remain unanswered regarding their capabilities against stronger opposition, and the game against Juventus awaited a final reply. To do so, the Dutch manager brought the rested Jonathan Tah and Lars Bender back into defense while Kevin Volland replaced Amiri in the eleven.

Leverkusen built the play in their standard asymmetric 3-4-2-1 shape to which Juventus reacted by pressing in a 4-3-1-2 formation. Bernardeschi, the ten, marked one of the pivots and depending on which, either Miralem Pjanić or Blaise Matuidi would step out on the remaining midfielder. Sami Khedira pressed the fullback instead while covering the dropping attacking midfielder with his positioning. 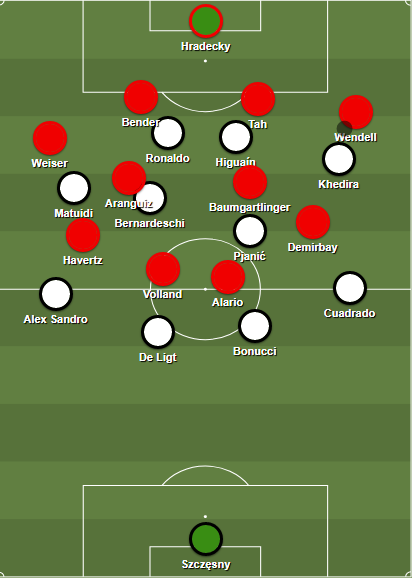 Through such pressing movements Juve were able to slow down Leverkusen’s passing and force them into a stale horizontal circulation between center-backs, or a backpass. Eventually, though, in part because of the strikers’ low work rate, the visitors broke through halfspaces If you divide the field in five vertical lanes, the halfspaces are the lanes that are not on the wing and not in the center. Because there is no touchline like on the wing, players have the freedom to go everywhere. But this zone often is not as well-defended as the very center. This makes it a very valuable offensive zone to play in and a lot of chances are created by passes or dribbles from the halfspace. to access Kai Havertz or Kerem Demirbay. However, once Leverkusen reached these tens, Juve were effective at stopping them from progressing forward immediately by surrounding the receiver and blocking the center, after which they would settle into a 4-3-1 medium block. A medium block refers to a team that retreats in their own half out of possession, generally only disrupting their opponents some way into their own half. The two strikers were quite uninvolved in deeper phases of defending and their positioning mainly served the team of options when countering.

On the ball, with Bernardeschi between the lines – the main target when attacking – the two fullbacks were the ones in charge of providing width, while the central midfielders occupied the halfspaces and the strikers dropped and roamed to combine.

Leverkusen opted for a type of pressure intended to close down central spaces, leaving the goalkeeper the passing option towards the fullbacks, who would be immediately pressed by the visitor’s fullbacks. The pivot pressed Pjanić, inadvertently leaving space behind him for Bernardeschi to receive in. The strikers, meanwhile, pressed the center-backs. In doing so, Leverkusen did orient Juve’s circulation wide in such a manner that they would be able to close down the receiving fullbacks. However, it left wide areas exposed when the Cuadrado made runs into depth.

Although Higuain’s opener was facilitated by a poor header from Jonathan Tah, it can be noted how the defensive line struggled with a rather basic pass into depth in that situation too.

From the Juventus lead onward, neither team was able to create particularly dangerous plays, and although Leverkusen controlled the ball and the dynamics of the game, they failed to find entries into Juve’s medium block. Even so, Juve probably had the best opportunities when building the play. Through simple wall passes A one-touch pass that quickly sends the ball back to sender. In the meantime the sender has quickly moved into free space, and he momentarily escapes pressure. they would pull the fullbacks out of position and free players in space against the two central defenders left isolated. However, Tah in particular was efficient when covering large portions of the field.

During half-time, Bosz replaced an uninspired Demirbay for Amiri, who slotted in at left attacking midfield. The substitution did not particularly affect the flow of the game though, and Juventus started the half strongly by building up the play more vertically and aggressively. Not only did the passing affect the buildup efficiency, also did off the ball movements. Through the attackers’ further emphasized dropping movements Juve could stretch the opponent’s defense and open space behind it without encountering too many risks.

Leverkusen’s pressing did not trouble Juve, who found space both between the lines and in the early stages of buildup. On the flip side, though, this direct approach did not allow the hosts to consolidate possession in a way that would allow good counterpressing. After losing possession, a team immediately moves towards the ball as a unit to regain possession, or at least slow down the pace of the counterattack. As a result, whenever Leverkusen recovered possession they would find space and time either to progress or switch the play. However, the follow up was inefficient, since Juve recovered their shape with diligence.

In the 62nd minute Juventus scored their second goal. A good spell of offensive pressure during which Leverkusen were unable to respond both defensively and offensively had anticipated the inevitable as Juve’s quick possession and short combinations disorganized the opposition’s structure with alarming ease. Peter Bosz’s men were completely completely stunned by the speed at which the ball was moved and put at the mercy of Juve’s initiatives.

As indicated by Rodrigo Bentancur’s introduction for Khedira, Sarri wanted to control the ball throughout the rest of the half. Like many times this season, Juve were unable to do so, which prompted Sarri to insert Ramsey first and then Dybala to restore energy in attack and put the match to an end.

Juventus confirmed the positive performances and impressions from their previous outings in a win that never really was in doubt. Bosz’s men were left helpless, as Juve progressively grew to the point that any action from Leverkusen was made in vain. The Germans now sit last in a group they were expected at least to compete in, yet, so far the challenge they have been able to put up has been rather disappointing considering the level demonstrated in the Bundesliga.

Juventus, meanwhile, leap to the first position, en route to a Champions League campaign they will want to experience as protagonists. 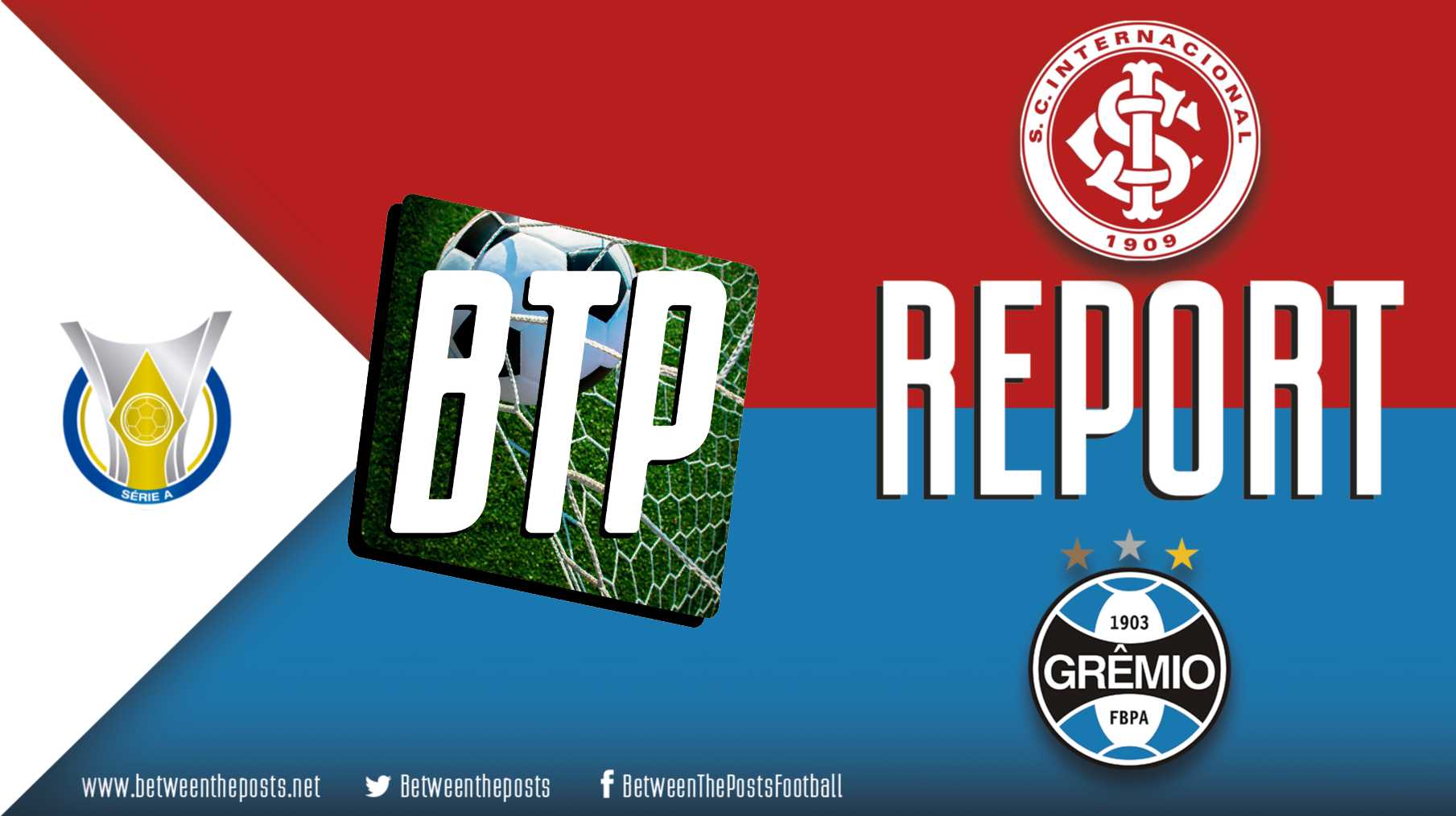 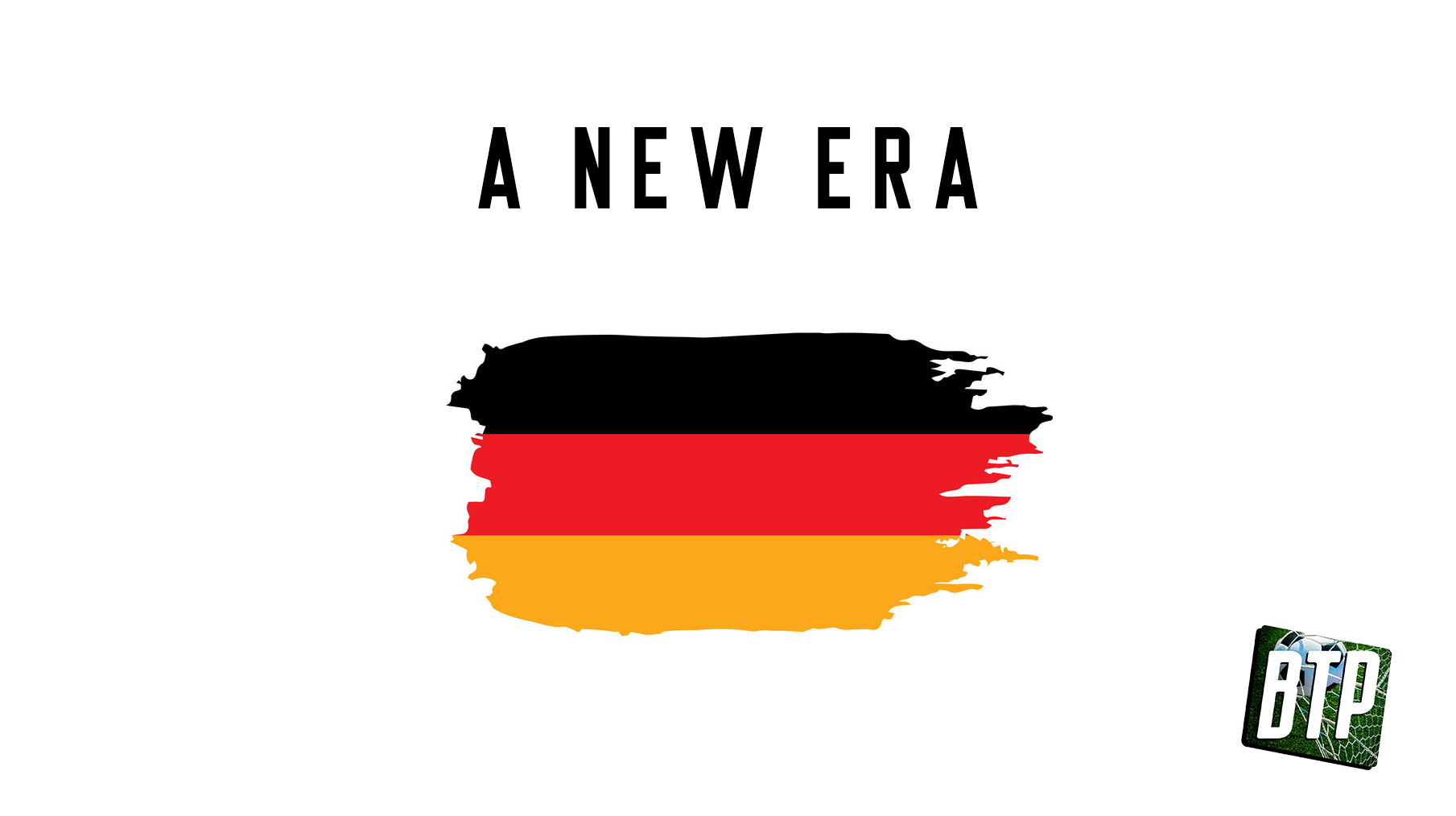