May 12, 2022 Emmanuel Adeyemi-Abere No Comments

A heavyweight cup final clash on paper lived up to the billing. Six goals ebbed and flowed between two outfits whose changes shifted and decided the dynamic of a symbolic outcome.

In an attempt to revive their old status, Juventus turned to the familiar face of Massimiliano Allegri. Yet, creating a new dynasty is proving trickier than taking care of the one he took over in 2014. Their form in the new year, only worse than that of AC Milan, has turned around their fortunes to book a spot in the Champions League. A place among the European elite is still far away, but retaining the Coppa Italia affirms their intent to take back their seat at the summit of the national pecking order.

Indeed, it is Inter that have made the most of the fall of Juventus. Not content with ruining a decade of Turinese dominance in Serie A, this outfit have been vying to win their second Scudetto on the spin. The exit of Antonio Conte from the dugout has led to their evolution under Simone Inzaghi, whose men still sit two points off of their local rivals at the top of the table. The double is no longer in their hands, but claiming a trophy still signifies their ambitions to steer clear of mediocrity in the long run.

Like Conte, Inzaghi has not strayed from a 5-3-2 shape. One of the starting spots in doubt ahead of kickoff was at left center-back. Federico Dimarco dropped to the bench, but Alessandro Bastoni was not fit to start. So, Milan Škriniar filled this hole. Denzel Dumfries also missed out, making way for Matteo Darmian. Upfront, Edin Džeko came in for Joaquin Correa, partnering with Lautaro Martínez.

All eyes were on the final for Allegri, who had heavily rotated last time out against Genoa. Only four men featuring from the off in that game were in the lineup here. Two were Paulo Dybala and Dušan Vlahović, spearheading the attack on the night. Denis Zakaria came in for Arthur Melo to join Adrien Rabiot in the middle of the park, and Matthijs de Ligt displaced elder statesman Leonardo Bonucci.

Unlike Inzaghi, Allegri has adopted many systems on his return to Turin. In the first Serie A fixture between the two outfits back in October, he went for a 5-3-1-1 block. Conversely, two clashes in 2022 have seen him turn to a 4-2-3-1/4-4-1-1 formation. In either case, a man has taken on the assignment of covering Marcelo Brozović, key to Inter’s possession. Thus, a 4-2-3-1 shape returned for the final.

In this way, Allegri sought to force the issue with a higher block. However, that approach turned out to be in vain. A corner from Inter worked its way to Brozović, who slid to Nicolò Barella on his left. He cut inside Cuadrado, bending an effort into the corner of the net in the 6th minute. Juventus had given him too much space and time in this sequence, mimicking a pattern of problems in open play.

A piece of brilliance from Nicolò Barella to give Inter an early lead in the Coppa Italia final 🔵⚫ pic.twitter.com/AFTsVijeXz

Inter have tended to build the play with an asymmetric back three that shifts to the left. So, Dimarco or Bastoni often advance into the final third, while Škriniar can carry the ball forward from deep. The introduction of Danilo D’Ambrosio to the back three had altered this tilt, flipping it over to the right. But many facets of this flexible system were the same. Škriniar can push up into the six space in the buildup, the forwards usually drop to offer a central link, and the wing-backs can come inward. Above all, Brozović was free to move next to the central defenders or roam higher to get free from Dybala. 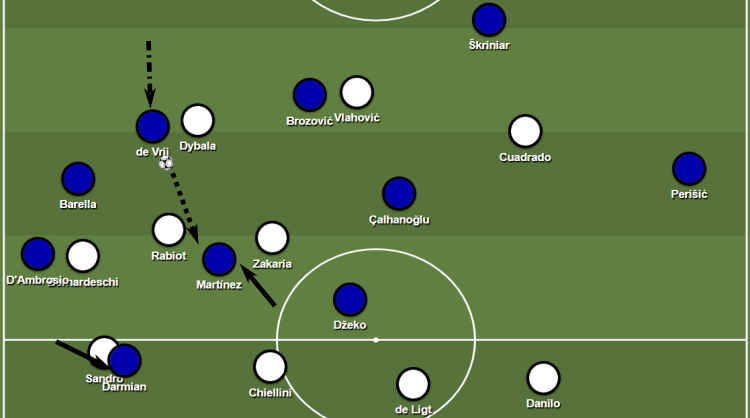 2nd minute: buildup sequence from Inter. A third man combination between Samir Handanović and Brozović rotates the play to Stefan de Vrij, forcing Dybala and Vlahović to exchange covering duties. Once the right sided central defender drives forward, the wide rotations begin. D’Ambrosio moves up the flank, drawing along Federico Bernardeschi, and Barella drops to his inside, pulling Rabiot out of midfield. Darmian comes onto the inner shoulder of Alex Sandro, and Martínez drops off the last line.

All the while, automatisms kept Inter in check. If Darmian had dropped back sharply to support the play, the weight of the pass into the wing-back implied he would hit a diagonal first time ball into the front two. Or, if they wanted to slow down the pace, the asymmetry in the back three created a free man through the active role of Handanović. For the opening 20 minutes, Inzaghi’s men were on top.

But matters in this final would not be smooth. Juventus had their share of the play to threaten Inter’s 5-3-2 block. From their 4-2-3-1 shape, Danilo held back more than Sandro. Rabiot sat deeper than Zakaria, whose advances in the right halfspace overlapped with pockets Dybala into which drifted. If the Argentine did not roam to create, the other main route of progression was through Vlahović. The striker sought to assert himself against de Vrij, but the Dutchman was more than ready for the duel. 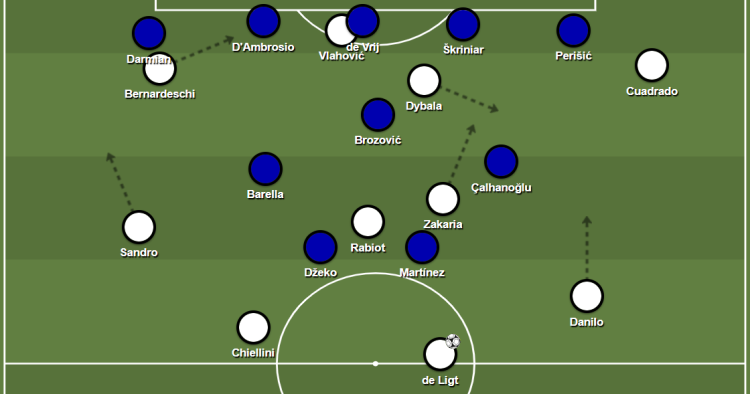 Juventus’ asymmetric 4-2-3-1 structure in possession during the first half.

Just before the end of the first half, an injury forced Danilo to depart the field. Allegri refrained from bringing on a defender. Sticking to a 4-2-3-1 system, he ordered Cuadrado to fill in at right back while Álvaro Morata operated as a left winger. Morata seemed to be a foil for Vlahović as another target in the penalty area. If so, the ploy did not take long to work: the equalizer had arrived in the 50th minute.

Morata had poked at an effort from Sandro, whose strike pitched up in front of Handanović and strayed into the net. The left back etched his name on the score sheet, but Morata was still to make a mark. He picked up the pieces from an Inter corner emerging from the restart, setting up a breakaway. Vlahović raced into the box, eluding D’Ambrosio, before beating Handanović at the second attempt.

Just after the hour mark, Inzaghi made a triple substitution to roll the dice. Dimarco replaced D’Ambrosio, featuring on the left of the back three. Škriniar then shifted back into his usual role on the right. Straight swaps saw Darmian and Džeko come off in place of Denzel Dumfries and Correa. Dimarco’s daring runs, the crossing of Perišić, and the poaching of Dumfries indicated Inter might load their left edge and penetrate the box on the right. Whatever the reason, Allegri promptly reacted.

71st minute: one of Dimarco’s many marauding runs through the left halfspace. Notice de Ligt’s orientation toward Martínez, along with Dybala’s high positioning, enabling Dimarco to threaten.

Bonucci came on, and Juventus then adopted a back five. But Dybala did not drop off like Morata to act as a wide midfielder in a 5-4-1 block. His orientation near Brozović allowed Inter to overload the left, where Dimarco threatened. In the end, Juventus’ cautious wing defense was costly. In the 78th minute, Dumfries crossed to Perišić, whose headed layoff met Martínez. He drew a foul from Bonucci to earn Inter a penalty. Çalhanoğlu stepped forward, slotting the ball home. 2-2. Extra time beckoned.

Dramatic tension did not relent. From a secondary phase of a set-piece, de Vrij drew contact from his compatriot de Ligt, winning a second penalty on the night. Inter now had the chance to take the lead. Arturo Vidal had replaced Çalhanoğlu, so it was Perišić that took responsibility. He duly converted.

To make matters worse for Juventus, their opponents were sitting on their own one-two punch. Inter made headway up the field from a corner, switching flanks to find Correa. Dimarco’s underlapping run sustained the charge to set up Perišić, whose stunning volley bagged him a brace and afforded Inter a two goal margin of lead. Allegri’s switch to a 4-3-3 shape with Arthur in the midfield and introduction of Moise Kean was futile. Blue and black ribbons would adorn the trophy this year.

Inter were far from perfect over the two hours of action. But this victory is due reward for the menace from Perišić and his backing after the break from Dimarco, whose role stresses the fluidity of this outfit at their best. The summer turmoil is a distant memory: Inzaghi has done a sterling job in Milan.

Juventus will rue not only the result, but also a lackluster display from their collective. The switch to a shaky chain of five quelled momentum, and the return to a back four was too little, too late. Allegri may have wrapped up fourth spot in Serie A, but his quest for the next tactical progression continues. 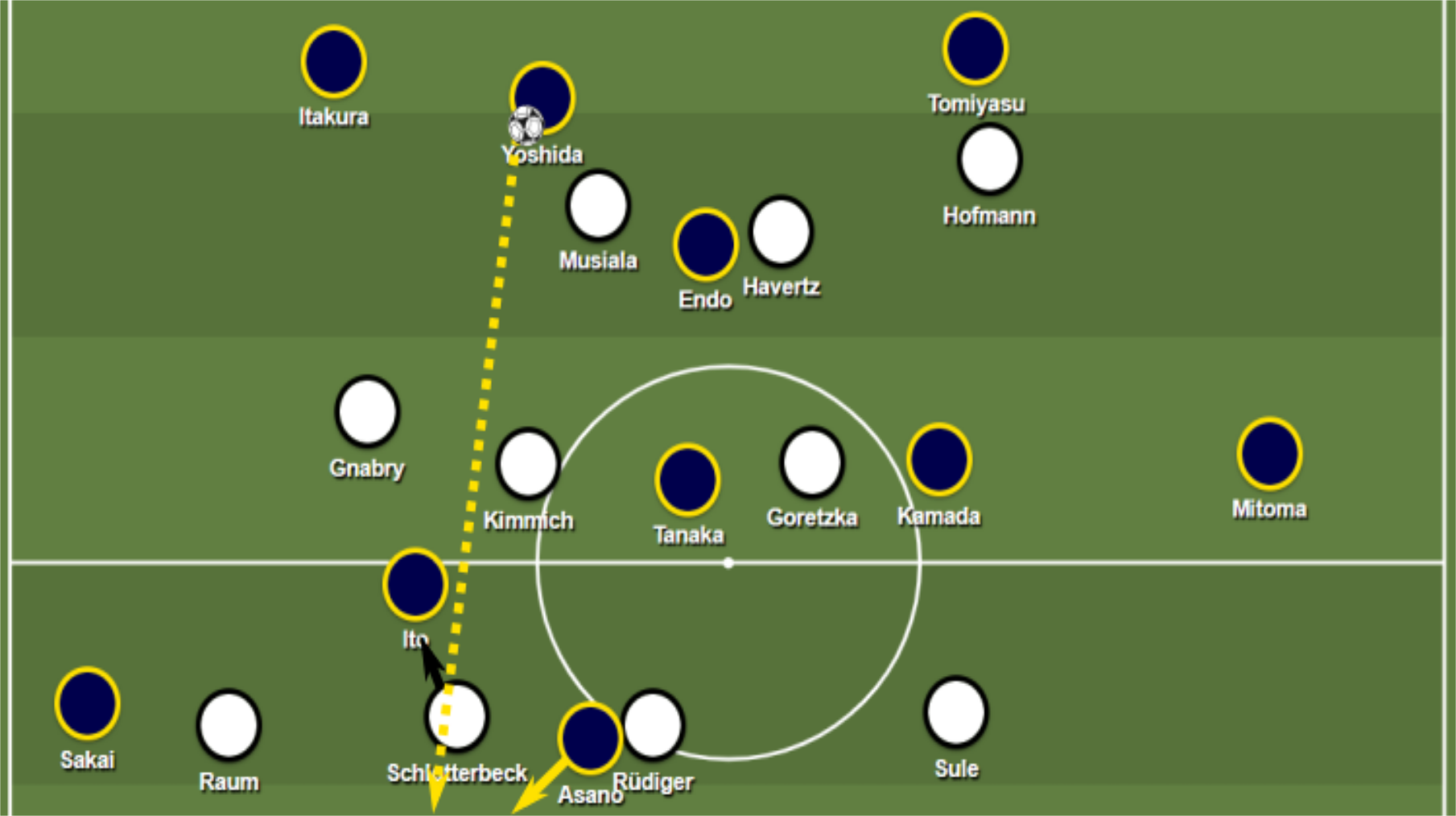 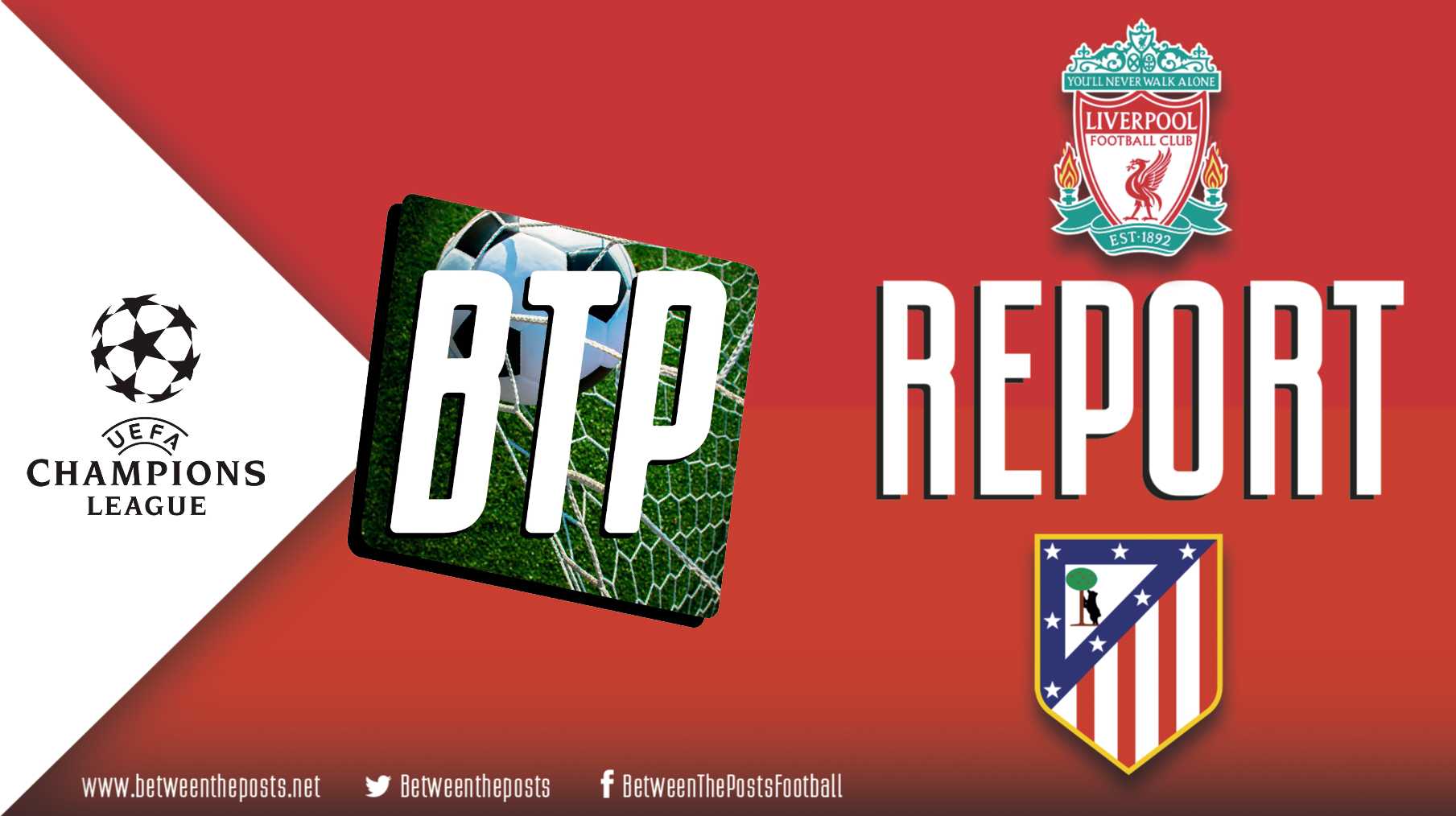