Breaking into Valencia’s defense is not an easy task, but once Juventus got an opening goal, the match never seemed out of control for them. Thanks to their controlled possession and great defensive organization, Juventus saw the match out with minimal effort as they cruised towards Champions League knockout phase qualification.

Going into this match, Juventus had gathered nine points from four games and needed just a single point to qualify for the knockout phase of this season’s Champions League. So far this season, Juventus are in great form; the only match they lost was against Manchester United, who claimed a stolen victory at Juventus’ Allianz Stadium.

For Valencia, this match was the last chance to make anything from their Champions League campaign. Sitting on five points from four games, a win against Juventus was needed to keep up with Manchester United.

As always, Valencia were set up in a 4-4-2 shape, with Dani Parejo and Geoffrey Kondogbia as central midfielders, combative Francis Coquelin as right midfielder and the explosive Gonçalo Guedes on the left. Nominal right back Cristiano Piccini has been injured for a couple of weeks now; Danish midfielder Daniel Wass has been filling in for him as a makeshift defender.

Juventus’ formation of choice has been 4-3-3 for most of this season. In absence of the injured Emre Can and Sami Khedira, Rodrigo Bentancur has quietly settled in midfield, being deployed alongside the undisputed deep playmaker Miralem Pjanić and Blaise Matuidi in most games. Up front, Allegri’s crop of attacking talent is nearly unlimited. For this match, he chose the not too shabby front three of Cristiano Ronaldo, Mario Mandžukić and Paulo Dybala.

Valencia knows how to defend

Valencia have a manager that knows how to organize his defense. Marcelino sets his team up in the classic 4-4-2 formation that has become staple along teams that play a brand of football based on a solid defense and quick transitions when the ball is won. As a result, in LaLiga Valencia concede 0.53 expected goals The amount of goals a team is expected to score based on the quality of the shots they take. from open play per match, which is the second lowest of all teams.

Their good defensive record may suggest that they park the bus and try to stifle their opponents by absorbing all the pressure. That is not always the case, though.

Especially in the opening phase, when Juventus commenced their build-up, the two strikers Rodrigo and Santi Mina actively tried to prevent Juventus’ central defenders and Pjanić from playing the ball forward. Pushing the fullbacks up high, Juventus enjoyed a three-versus-two advantage in the center of the field, but Valencia’s strikers did a good job in making sure the easy pass to Pjanić was not available. 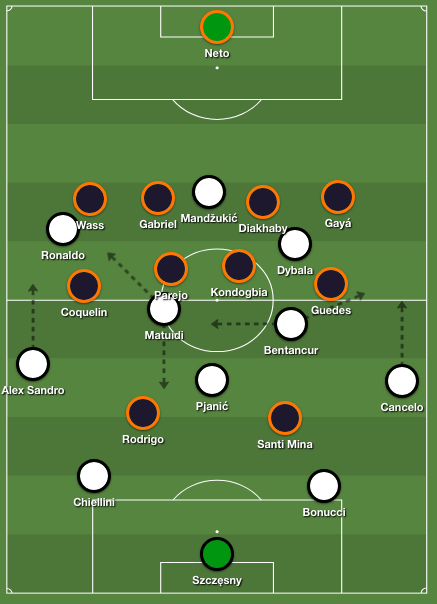 Juventus’ general positioning and movements in their 4-3-3 formation,
against Valencia’s flat 4-4-2 shape.

Either Matuidi, Bentancur or Dybala dropped deeper to make sure Juventus could progress the ball up the field, by making themselves available in midfield and playing a wall pass A one-touch pass that quickly sends the ball back to sender. In the meantime the sender has quickly moved into free space, and he momentarily escapes pressure. into Pjanić. Parejo and Kondogbia tracked those dropping players though, and it did not always end up in a smooth Juventus attack, as sometimes the ball was lost and Valencia regained possession.

Breaking the wall of eight

When Valencia settles in a low block, A low block refers to a team that retreats deep in their own half out of possession, generally only disrupting their opponents around their own box. it is very hard to play through them. They get the basics of defending on their own half right; the distance between the central defenders and the strikers is never too big, the central areas are congested and when the ball moves to the flanks, the whole team moves as a unit from left to right.

How do you play through that? Well, it helps if you have the attacking talent Juventus have on their disposal. Their approach was different on either flank. On the right, the marauding João Cancelo played as a de facto right winger in possession, while Paulo Dybala was seldomly seen on the right flank and played as a number ten more often.

Bentancur filled in a number of roles in Juventus’ play in possession, ranging from dropping back as a second number six alongside Pjanić, playing as a second number ten in the hole behind Mandžukić and aiding Cancelo down the touchline. Even though Dybala had an anonymous night on the ball, his positioning still left Cancelo with time and space on the ball, which he used to put in a number of crosses, which is how most of Juventus’ dangerous situations arose.

On the left, Juventus’ approach was a bit more traditional, even though any flank that can boast Cristiano Ronaldo can hardly be called that way. Alex Sandro, Matuidi and Ronaldo filled in the roles you see most of the times from a fullback, a midfielder and a winger, offering not much in terms of surprises.

Of course, Ronaldo likes to roam and act as a second striker especially when the ball is on the right, so the Portuguese acted in support of Mandžukić from time to time, leaving the left wing open for Sandro. In characteristic fashion, CR7 cut inside a couple of times to try his luck from twenty to thirty yards out, often without hitting the target.

With only 38 percent of ball possession in the entire first half, Valencia’s attacking plan revolved mostly around counterattacks. With their strikers and Guedes, they have speed and depth, while Parejo is brilliant in dribbling past one or two players and then launching the quick players up front. Juventus, however, had a fine counterpress going on when they lost the ball and are a team that are well protected for counters, as there are always enough players behind the ball on moments the ball is lost.

So, both teams did not have a very spectacular half in terms of offense. Unsurprisingly, the score was tied 0-0 at half-time, both teams combining for 0.46 Expected Goals. Valencia’s biggest chance came ten seconds before half-time, when Mouctar Diakhaby powerfully headed a corner kick on Wojciech Szczęsny’s hands.

Juan Cuadrado came on for Alex Sandro, as Juve’s manager Max Allegri switched Cancelo to the left flank and put Cuadrado in as a right back. Cuadrado’s transformation – from a pure winger to a wing-back in a system with five defenders, to a player that can play as a right back in a traditional back four – is quite remarkable. It gives Allegri even more options, which feels a bit unfair, since he already has one of the deepest squads in Europe.

Juventus’ formation did not change, even though Dybala and Ronaldo both started to play even more centrally, and Mandžukić regularly switched over to either side to provide width if necessary. After sustained pressure, the home side eventually broke the deadlock in the 59th minute.

After Juventus played through a relatively high press by Valencia, Ronaldo got on the ball in the penalty area. He produced one of his trademark feints, cut to his left and put in a wonderful low-driven cross to Mandžukic. He could not miss; 1-0 to Juventus.

One minute later, Valencia equalized. A free kick was put in goal by the very same player that came so close to scoring just before half-time: Diakhaby. Unfortunately for Valencia, Diakhaby had used his arm in the process. An excellent piece of officiating to disallow the goal that would have equalized the game.

It was the closest Valencia would come to scoring. As explained earlier, Valencia are an excellent side against the ball, but against Juventus’ elite defenders, they struggled to create big chances. Juventus closed the shop; they are simply not a team that hunt for a second goal if they have what they need.

It is never easy to determine whether a team deliberately took its foot off the gas pedal, but Juventus certainly looked like they did exactly that, in the final twenty minutes. The Italian champions finished the match in very mature fashion, not messing up their defensive responsibilities, but without wasting valuable energy. After the final whistle had gone, Valencia knew they were knocked out of the Champions League, while Juventus had progressed to the next round. 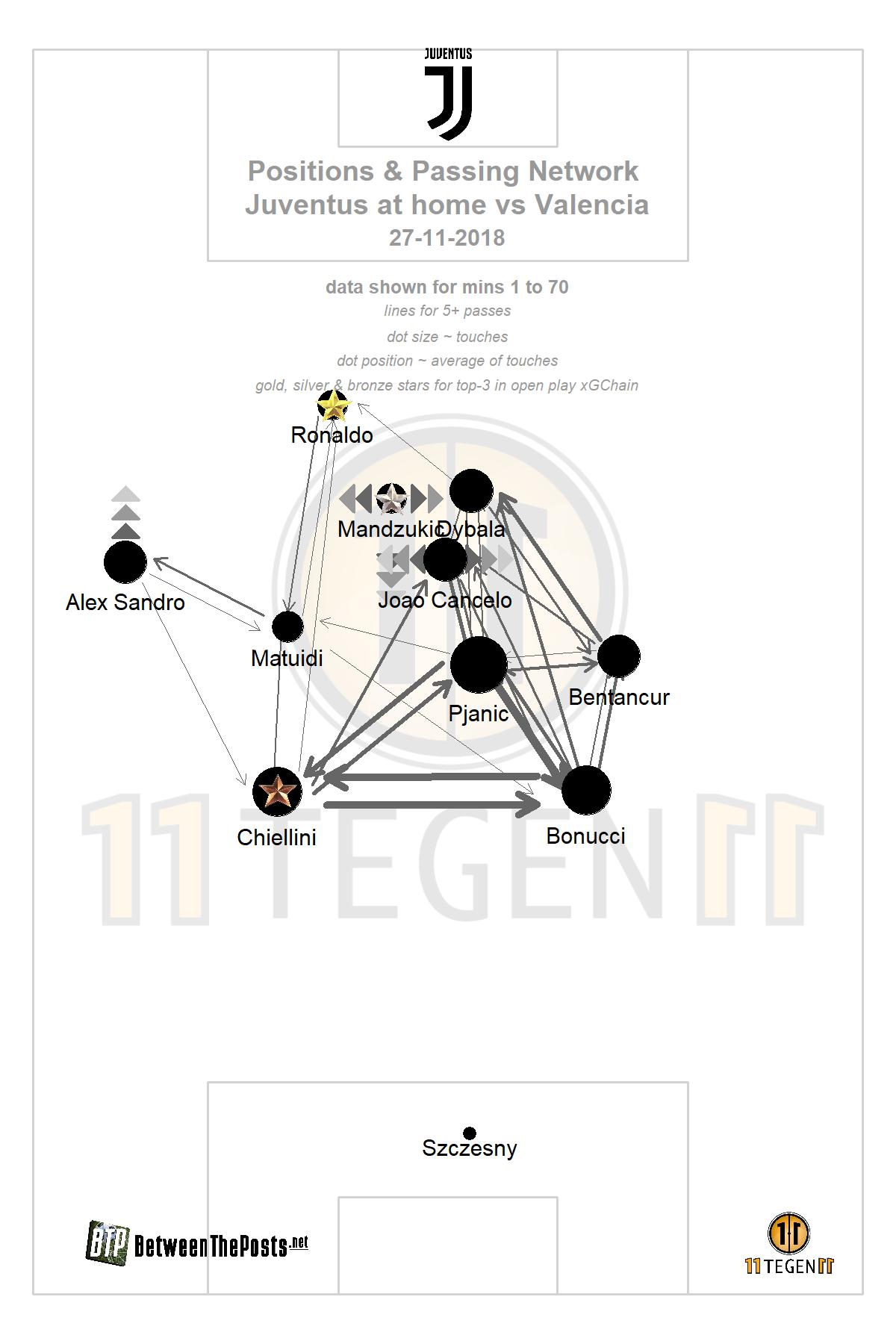 Juventus excellent form leaves them as one of the prime candidates to win this year’s Champions League. It is very hard to point to a weak spot in their squad, they have experience, are rock-solid at the back and Cristiano Ronaldo is famous for his killer instinct when the Champions League reaches March, April and May.

Valencia might be an outsider for this year’s Europa League title, too. Juventus are one of the best teams in the world and had a hard time creating a lot of meaningful offense. There is lots of quality on the defensive side of the ball and the squad is quite deep too, so do not sleep on them in the Europa League after the winter break. 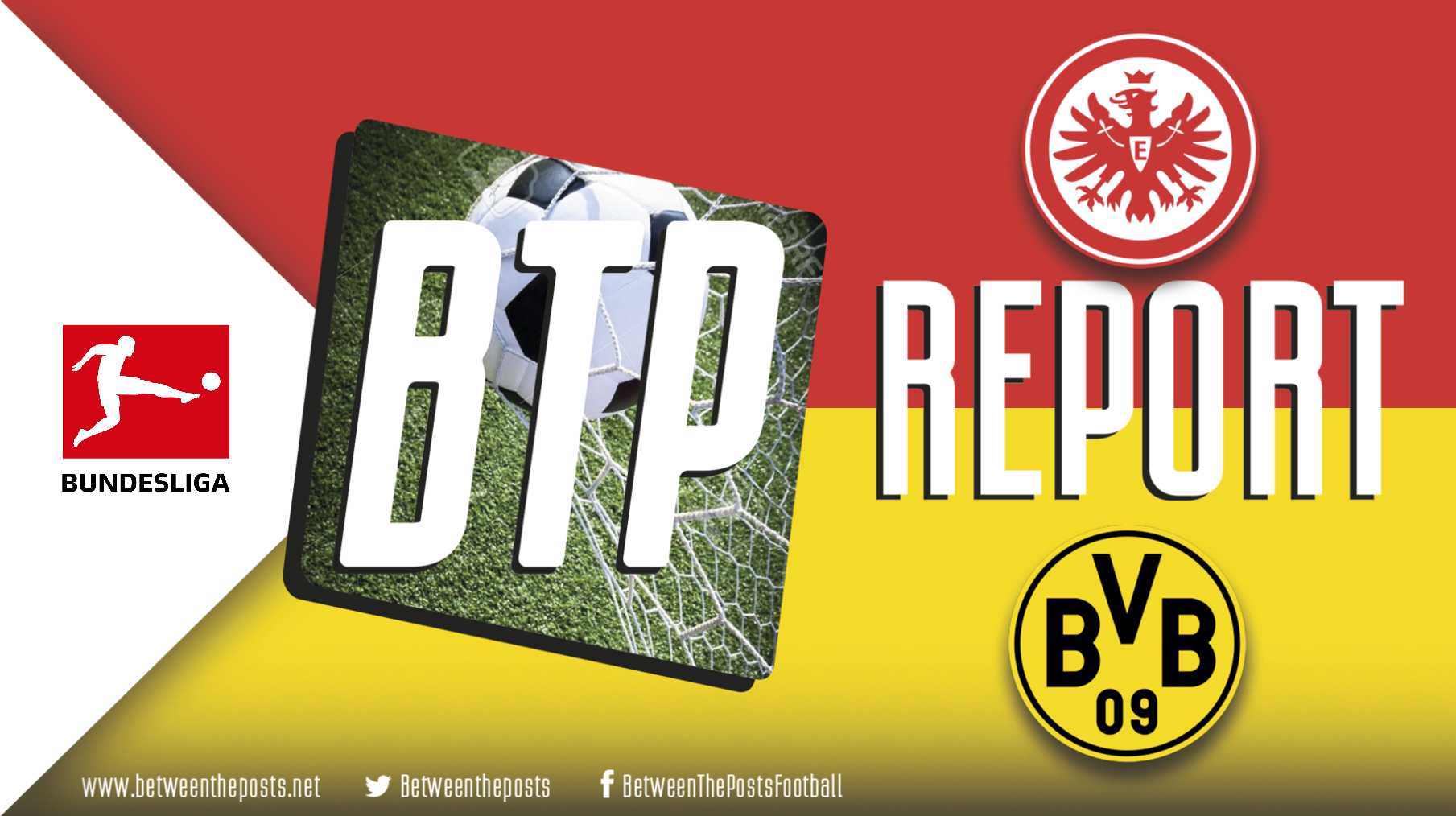 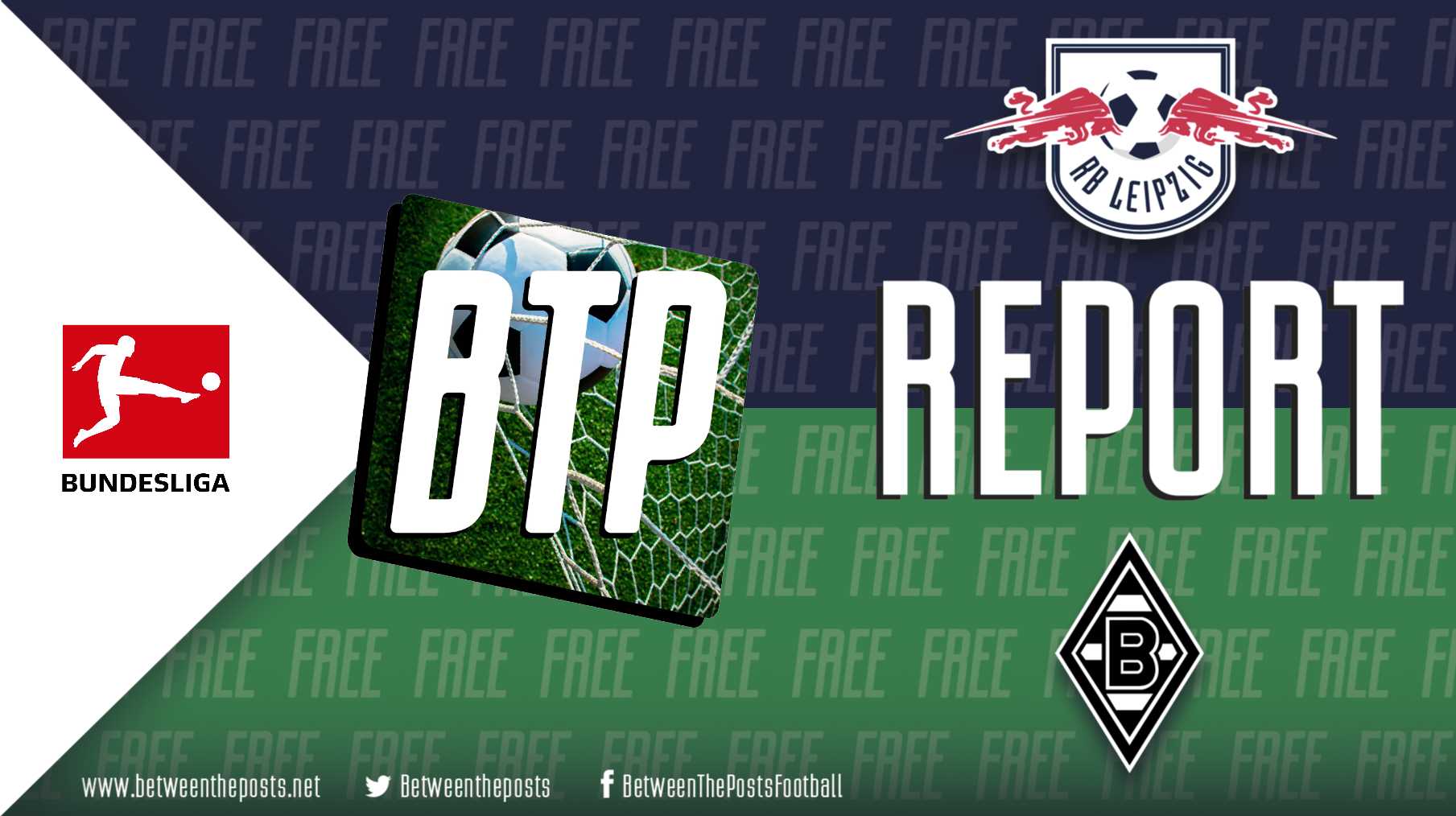