Two overlapping systems were held to a draw by goalkeeping performances and some luck on Verona’s side. With the post being hit twice by Luis Alberto, Lazio probably will be disappointed with the result, even though they never seemed in total control of a game Verona was capable of managing through different stages.

Lazio’s season has been one to remember so far. They have been the only team capable of keeping track of Juventus and Inter, cementing Simone Inzaghi’s men a place as realistic title contenders.

Ciro Immobile’s scintillating goalscoring form has given Lazio the necessary fuel to do so, but Luis Alberto has been the true engine from his creative midfield position. So, with two of Lazio’s star players in the form of their life, Inzaghi sought to reduce the gap with the league leaders to two points by making the most of their game in hand against Hellas Verona.

Inzaghi started his team in the usual 3-5-2 formation. Gil Patric, Francesco Acerbi and Ștefan Radu formed the defense, with Manuel Lazzari and Senad Lulić as wing-backs. Lucas Leiva, Sergej Milinković-Savić and Luis Alberto featured in the center of the field, in charge of assisting Ciro Immobile and Felipe Caicedo.

Ivan Jurić’s side also had a lot at stake. Their six games unbeaten streak cried to be stretched even further, as a win would have sky-rocketed them from eleventh place into sixth. In terms of tactics, Valerio Verre started as false nine, A striker that constantly drops deep and plays like a number ten. supported by wingers Fabio Borini and Mattia Zaccagni in Hellas Verona’s 3-4-3 system.

The natural overlapping of both formations allowed each player to face their direct opponent immediately. Lazio’s three center-backs were pressed by Verona’s attackers, while the ball-near pivot marked Leiva.

The hosts tried dealing with the pressure through Luis Alberto’s drop-ins from between the lines. Initially high in the left halfspace, If you divide the field in five vertical lanes, the halfspaces are the lanes that are not on the wing and not in the center. Because there is no touchline like on the wing, players have the freedom to go everywhere. But this zone often is not as well-defended as the very center. This makes it a very valuable offensive zone to play in and a lot of chances are created by passes or dribbles from the halfspace. the Spaniard would drop to aid the buildup and exploit the time-space advantage over his marker – the remaining pivot. If the ball was played to Milinković-Savić instead, then Verona’s left half-back stepped out on the Serbian. 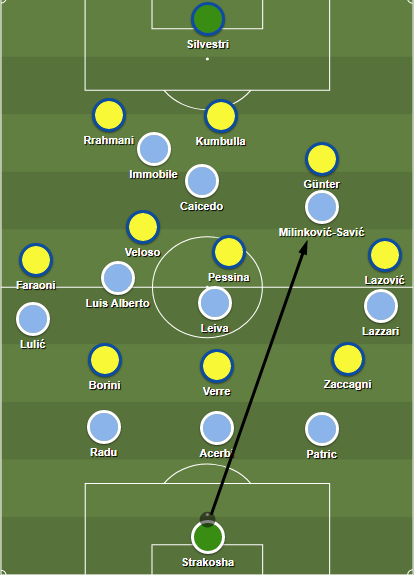 Strakosha plays a long ball to Savić to bypass the press.

Conversely to Verona’s aggressive defensive approach, Lazio would rather keep their 3-5-2 shape and cover the center than apply pressure on the ball-carriers from the start. The visitors were thus forced to circulate the ball wide, either to the left or right center-back or the wing-back, without gaining advantages over the opposition. And once the ball reached one of the center-backs, the ball-near interior would leave the defensive structure to press.

The matching systems made it hard for both teams to progress the ball through passing plays from the back, meaning that Lazio resorted to vertical passes towards the strikers to evade the pressure. These were usually directed to Caicedo, who could either use his physical strength to hold off the defender and lay-off the ball to a midfield runner or combine first-time with his striking partner, Immobile.

This was how Lazio created their first chance of the game – albeit through scrappy execution and some luck – when Radu picked out Caidedo upfield who had his pass deflected, eventually making it fall to Immobile in front of the goalkeeper. 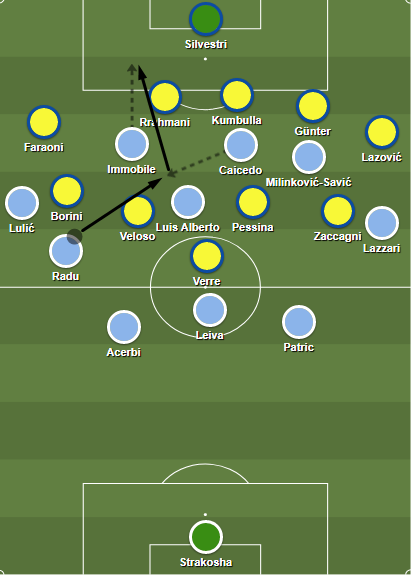 One of Lazio’s third man combinations leads to Immobile’s shot.

These direct sequences also started from Strakosha. Having spotted Verona’s struggles at dealing with second ball situations and third man combinations A passing combination between two players, while a third player simultaneously makes a run, usually in behind the opponent’s defensive line. After the initial combination, the ball is quickly played in depth for the third player to run onto. due to man-marking’s late reactions, the goalkeeper played the ball long to either Savić or the strikers.

Issues hold both sides back

Despite having identified the shortcut past their opponent’s man-orientations, Lazio still did not push for ball control, as they waited for their preferred attacks with space ahead of them. By dropping towards the ball, the strikers and midfielders had been able to pull the center-backs or pivots out of position, opening acres of space behind them. On the other hand, if Verona were able to regain their shape in a 5-3-2 low block A low block refers to a team that retreats deep in their own half out of possession, generally only disrupting their opponents around their own box. unless Lazio’s midfielders individually spotted an opening for a first vertical pass to the strikers, they struggled to break down the opposition’s defensive system. This stemmed from a lack of movements without the ball, leading to crosses being repeatedly whipped into the box without posing a threat.

Consequently, the first half’s return portrayed two powerless teams in the final third, The one-third of the pitch that is closest to the opposition’s goal. although Lazio went closer to taking the lead than their opponents, especially when Luis Alberto hit the post from outside the box just before half-time.

A changeless break was followed up by equally untouched tactical settings as Lazio attempted to draw out their opponents by circulating the ball back and forth, first into the feet of a player facing back to goal, and then laying it off to a free man facing forward.

Inzaghi’s men were consistently able to free a player with a better field of vision and position to carry out attacks, achieving what they struggled with during the first half: creating a stable attacking structure to break down the opposition’s deep block.

The ball started being moved faster and off the ball runs became more frequent, which resulted in more effective combinations and sixty percent possession inside the first ten minutes of the second half. Meanwhile, Jurić’s team could not escape the cage Lazio confined them to, only rarely finding a crack to peek through.

The pressing became more intense as well, with Lucas Leiva venturing out of his area more often to follow Verona’s dropping pivot.

It was not until the 64th minute, though, that Lazio truly frightened Verona with the woodwork being hit another time by a long-range Luis Alberto effort.

Probably worried about the amount of pressure his team had been forced under without being able to respond adequately, Jurić made the first change of the game by replacing Verre with Valentic Eysseric.

Moments later, Inzaghi made a double substitution to take off both wing-backs for Jony and Marušić. Lazzari and Lulić had both been guilty of not providing sufficient depth with their runs as well as struggling when faced in one-versus-one duels on the other end of the field, so the changes came as no surprise.

However, the impact Inzaghi probably expected his new entries to make failed to arrive, allowing Verona to slowly get back into the game and regain some of the control they had lost after half-time. The visitors started finding increased space as Lazio lost their compactness in possession, which allowed the attackers to lead counters without closeby opposition.

Finally, Lazio made their way back into the game as it neared its end. In injury time, Savić first miss-controlled a pass just in front of the opposition goalkeeper. Then, a late siege through corners and the subsequent rebounds would have seen Lazio leave the game with all three points were it not for Marco Silvestri’s saves.

A game played on thin ice was subject to a stalemate thanks to the goalkeeping performances on either end of the pitch.

Inzaghi’s men once again showed the need for space to fully express their potential, while Verona were able to create interesting situations on the counter that were not exploited due to lack of quality. Neither team was able to take advantage of the game in hand to leap above their competitors, but as long as Lazio and Hellas Verona keep up their form, the fans will be in for an exciting season. 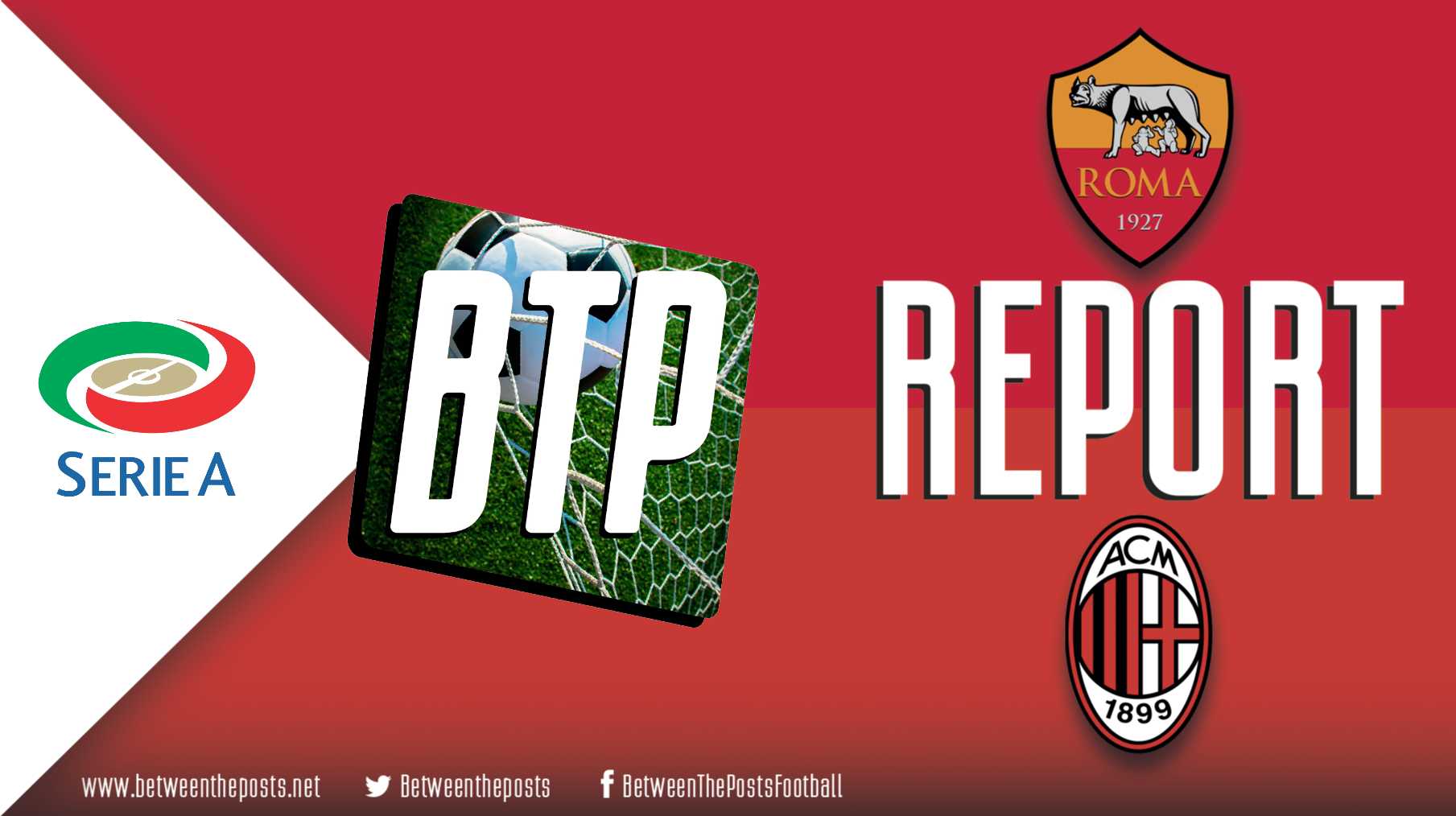 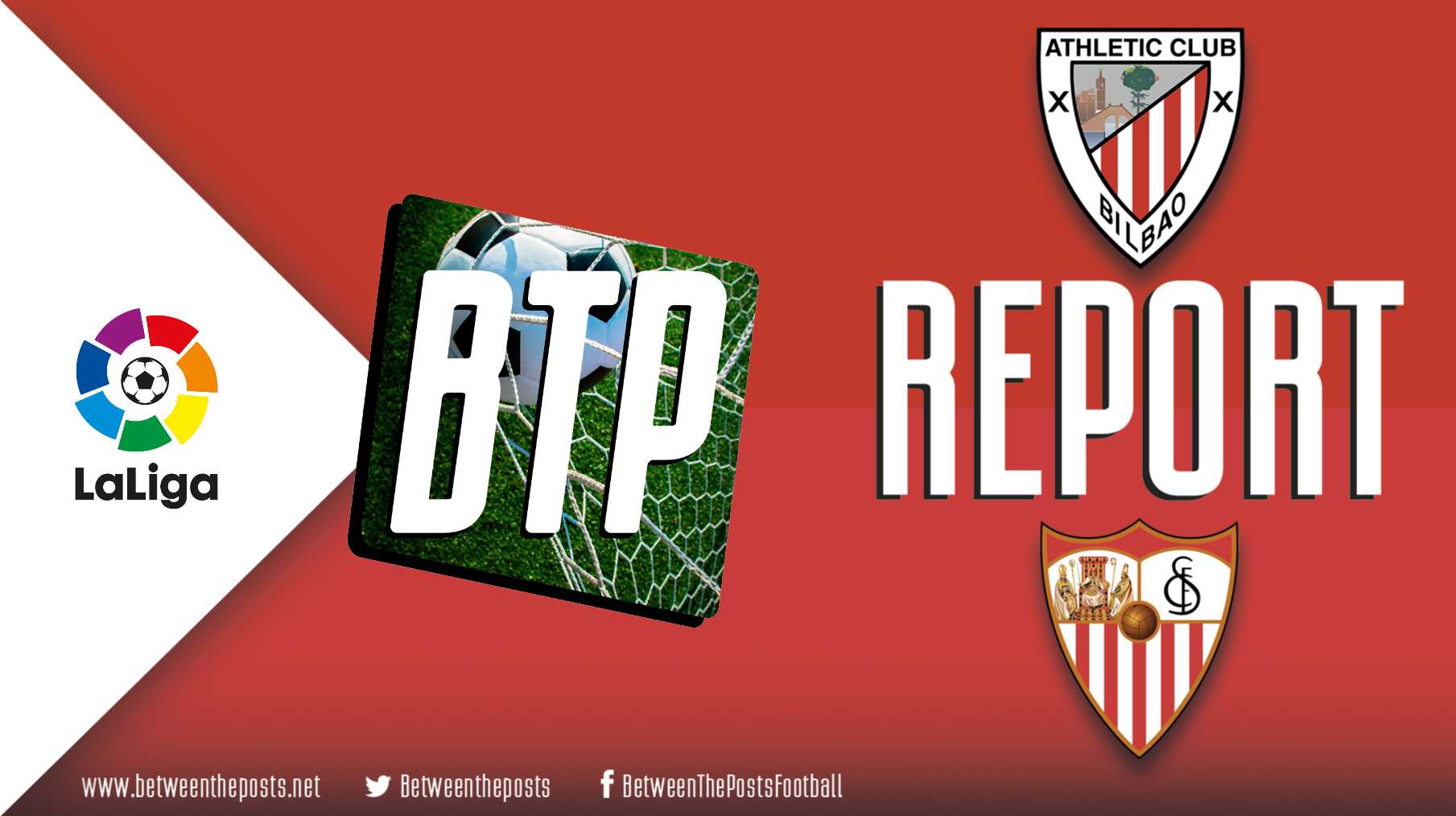