Having been second best for almost an hour, Brendan Rodgers’ tactical adjustments would reignite his team and lead to a last-minute winner to keep in range of the Premier League top spot. This result means Leicester City are still unbeaten at home and could seal the fate for the manager sitting in the away dugout.

Even though Leicester City and Everton went into December at opposite sides of the table, the underlying numbers revealed a closer matchup than one would expect. Both teams’ defensive numbers are very impressive – in fact, both are the top two in the Premier League for expected goals Conceded from open play.

Leicester City’s attacking numbers show a blip in form is on the horizon; as impressive as scoring 31 league goals from 22.3 expected goals The amount of goals a team is expected to score based on the quality of the shots they take. might seem, chances of sustaining this form is unlikely. Not to discredit the work of Brendan Rodgers, who has built an exciting, progressive, possession-based team with a solid defensive block A defensive block is the compact group of defenders that defends a particular zone, either their own half in a medium defensive block, or the zone around their own box in a deep defensive block. in place.

Brendan Rodgers has favored the 4-1-4-1 formation this season, which enables both James Maddison and Youri Tielemans to push forward into the final third. The one-third of the pitch that is closest to the opposition’s goal. Leicester City made no changes from the team that comfortably beat Brighton last weekend.

Despite plenty of Premier League clubs wielding the axe on their managers in recent weeks, somehow, Marco Silva remains standing as Everton boss. The numbers suggest they are not relegation worthy; however, a broken passing system, no genuine way of playing through defensive blocks and woeful shot quality have created a huge mess of a season for Everton.

Marco Silva finally changed his formation for the away trip to the East Midlands, transitioning from the unbalanced 4-2-3-1 system to a 5-2-3 shape. Due to Everton’s midfield being plagued with injury problems, Gylfi Sigurðsson dropped next to Tom Davies, whilst Michael Keane, Alex Iwobi and Dominic Calvert-Lewin all returned to the starting lineup.

Everton drastically toned down their usual pressing play and focused more on getting players behind the ball, holding their shape. As usual, both wingers – Alex Iwobi and Richarlison – peeled off the forward line and would join the midfield, which created a 5-4-1 low block.

Leicester’s midfield would constantly see rotations between Tielemans, Maddison and Wilfred Ndidi, but even with numerical superiority in this area, they struggled to make sufficient progress during the opening stages of the game. 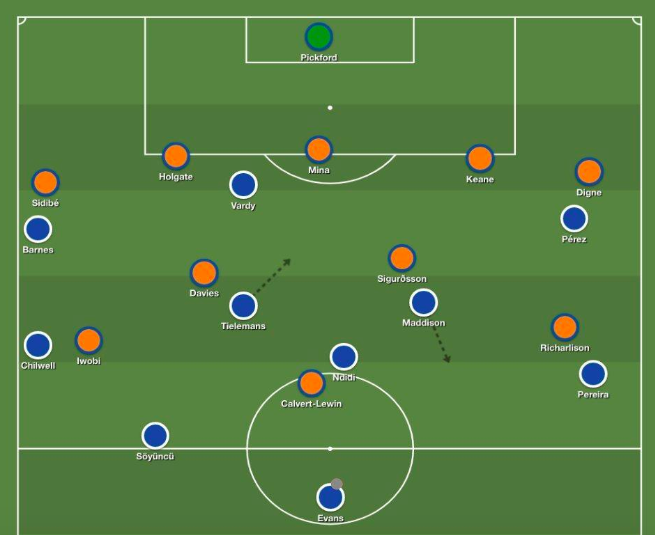 Leicester City’s shape when building up during the first half.

Due to one of the midfielders dropping off, as well as constant rotations in the center, Leicester were easily tempted into forming a U-shape When a team has possession on the sides of the pitch and with their own central defenders, this is called a ‘U-shape’, because it resembles the letter U. when they were in possession. Everton’s low block slowed the match down and forced their opponents out wide, however, this was not to say their defensive set-up was solid. Both Tielemans and Maddison could position themselves between the central midfielder and winger, something Manchester City utilized when playing through Silva’s teams press.

Leicester City did not threaten during the first half, but early signs of a way to play through were there to see.

As expected from a low block team, breaking forward at pace would be the main route into the opposition half. Both Lucas Digne and Djibril Sidibé were crucial to Everton’s counterattacks, Digne sticking down the left flank whilst Sidibé constantly dropped into the halfspace If you divide the field in five vertical lanes, the halfspaces are the lanes that are not on the wing and not in the center. Because there is no touchline like on the wing, players have the freedom to go everywhere. But this zone often is not as well-defended as the very center. This makes it a very valuable offensive zone to play in and a lot of chances are created by passes or dribbles from the halfspace. and looking to exploit the space behind Ben Chilwell.

Richarlison and Alex Iwobi played just behind Dominic Calvert-Lewin, something which has not really been seen under Marco Silva’s management. As Calvert-Lewin pinned the center-backs, Iwobi would roam in the space behind him, constantly wanting the ball and to feed an overlapping When a wide player, most of the times a wing-back, runs outside to fill in the space left by a winger going inside with or without the ball, this is called overlapping. Sidibé.

Everton would take a surprise lead in the 23rd minute, courtesy of one of their fast attacking transitions from deep in their own half. Richarlison would pick up a loose ball, before Calvert-Lewin gave possession to Iwobi who carried the ball out wide. Sidibé whipped in a brilliant cross, for Richarlison to head the ball in the back of the net, just Everton’s second shot of the game. A clinical and effective move.

Iheanacho comes on for Leicester and Rodgers changes shape

A goal down and a lack of chances created, Brendan Rodgers needed to make a change so Leicester could have access between the lines and make progress forward. He took off Ayoze Pérez in exchange for Kelechi Iheanacho, subsequently rotating to a 4-3-1-2 shape, with either Maddison or Tielemans pushing up behind the two strikers.

This solved a number of problems, giving players in the middle third more progressive options forward; as well as another option next to Jamie Vardy, who had been crowded out by Everton’s three center-backs up to this point.  Leicester continued to rotate their midfielders, which dragged Gylfi Sigurðsson and Tom Davies out of their position and broke the midfield line. 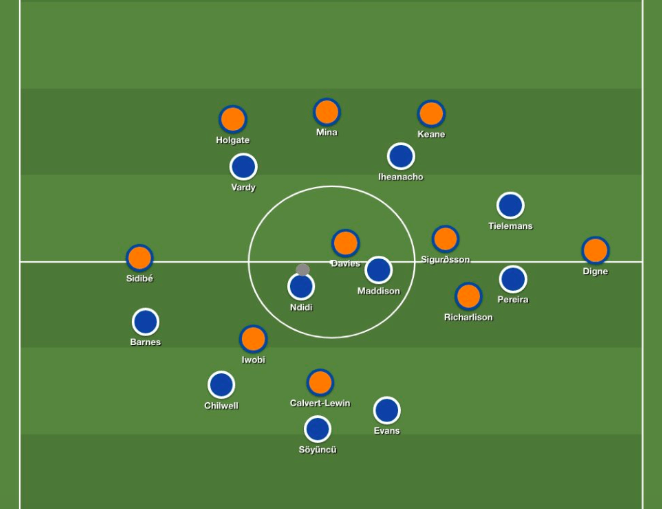 Leicester’s equalizer tipped the game on its head. Ndidi dispossessed Davies following an Everton goal kick, with the rest of Silva’s team already in their offensive shape. Everton’s midfield line was broken as Ndidi carried possession from the middle into the final third. Both Iheanacho and Vardy stretched the center-backs with runs towards the edge of the box. Iheanacho found Vardy at the back post for an easy finish, meaning the game was tied with exactly one quarter left to play.

With the game going against them, Everton started to break out of their low block and pushed further up the field. This led to Leicester’s best period of the game, continuously playing through a disorganized and scattered Everton. This was undelined by a huge missed chance by Vardy, who does not usually miss sitters, but an incredible cross from Tielemans was headed over the bar from close range.

Marco Silva would make his first changes with just twelve minutes left. Considering Everton were aiming to press higher up the field, one would assume that Silva would rotate his team back into their usual 4-4-2 shape, with an extra striker upfield. Taking off Dominic Calvert-Lewin, one who holds the ball up for long periods, and Alex Iwobi, the only one with any sort of creativity in the team, did not make much sense. Both Morgan Schneiderlin and Moise Kean came on, changing Everton’s shape into a 5-3-2 formation with Richarlison and Kean upfront.

These were Kean’s first minutes since mid-October, despite being fully fit in that time. He instantly brought new energy to the Everton attack, almost scoring with an audacious first-time attempt which caught Kasper Schmeichel off guard. However, the Everton team were heavily disorganized, midfielders often pushing up too far when pressing and leaving a huge amount of room between the lines for Leicester to go through.

With seconds left, Tom Davies would lose possession in the middle third, gifting one last counterattack for Leicester City. Ricardo Pereira found Iheanacho, who weaved in and out of the Everton defense before finishing past Pickford. His first goal for over a year, and one with great impact, as it could affect the race for the higher positions and a manager’s fate in the opposite dugout. 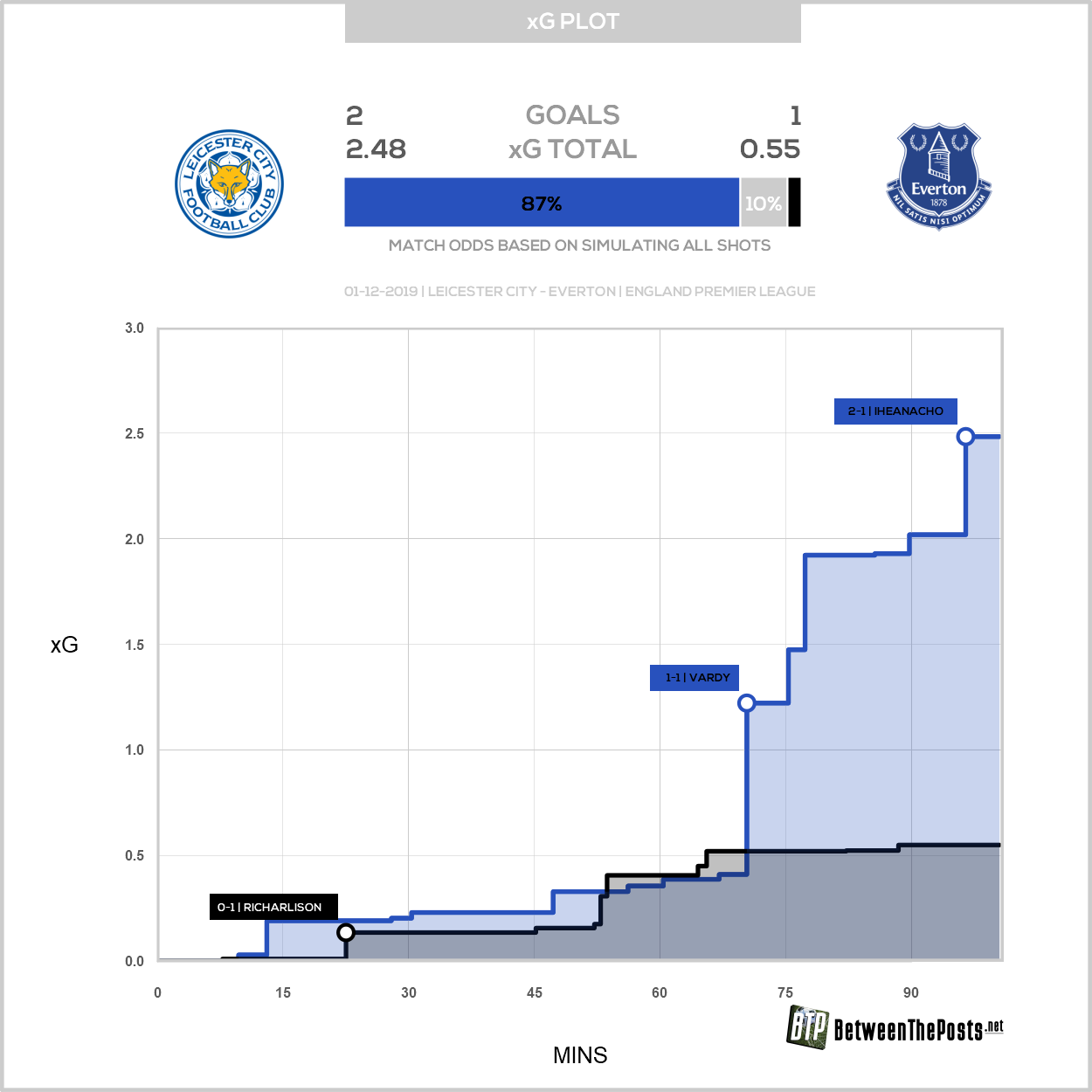 In comparison to Leicester’s recent performances, this was not up there in terms of creating a cornucopea of chances. For a long period in the game, they didn’t play through Everton’s low block effectively, and against a more structured opponent, Leicester could have stumbled. However, the changes reignited their frontline and they could have scored more. Seven victories in a row: times are good if you are a Leicester City fan!

Everton kickstarted their horrible December fixture list by producing one of the best hours they have played all season. Movements between the front three were exciting, even if they did not get the ball much, as well as the support Djibril Sidibé was offering. However, awful game management caught up with Marco Silva, and they deservedly let the game slip. Two points off the relegation zone, the Merseyside derby next and a possibility somebody else could be in the dugout. 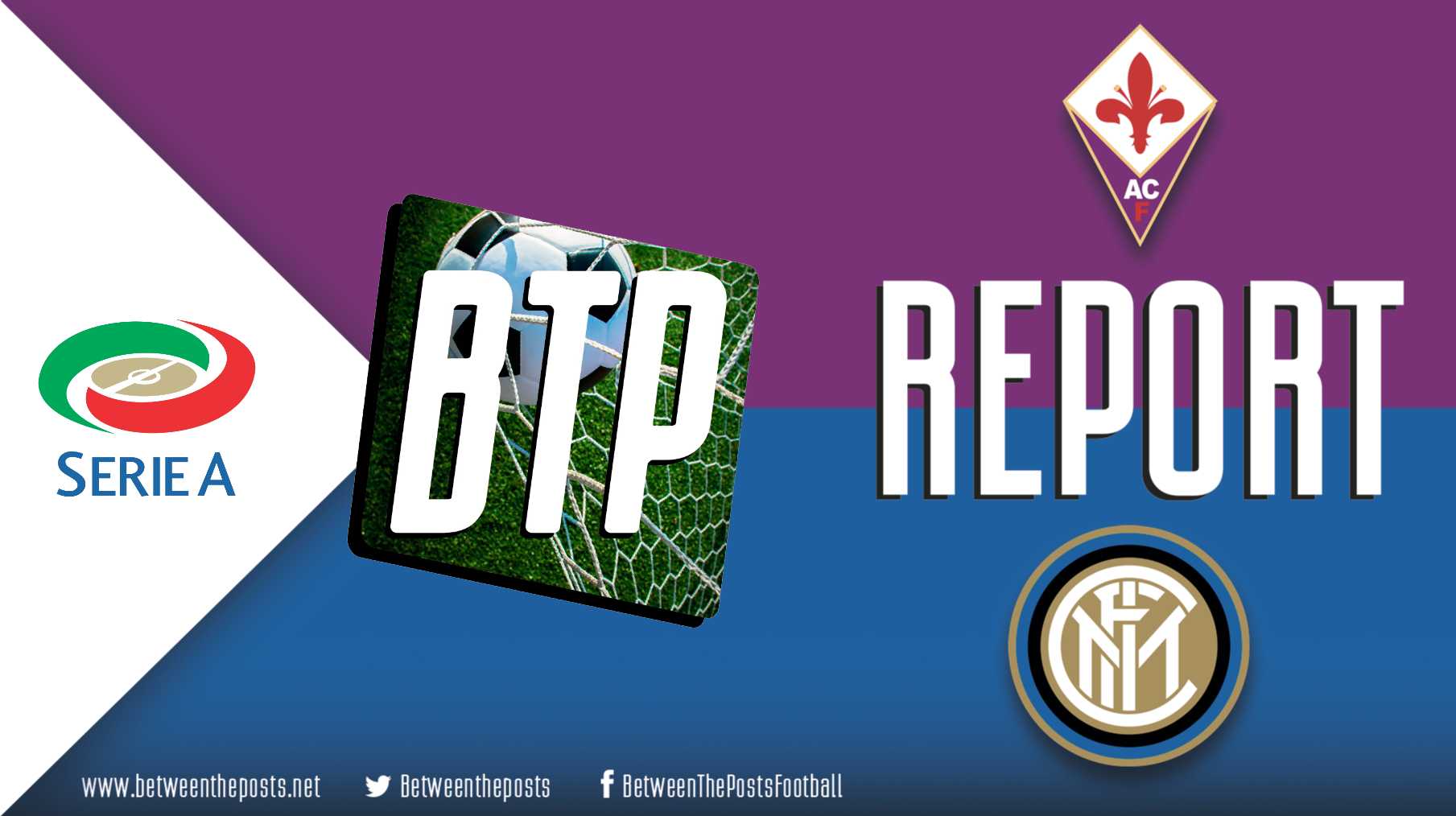 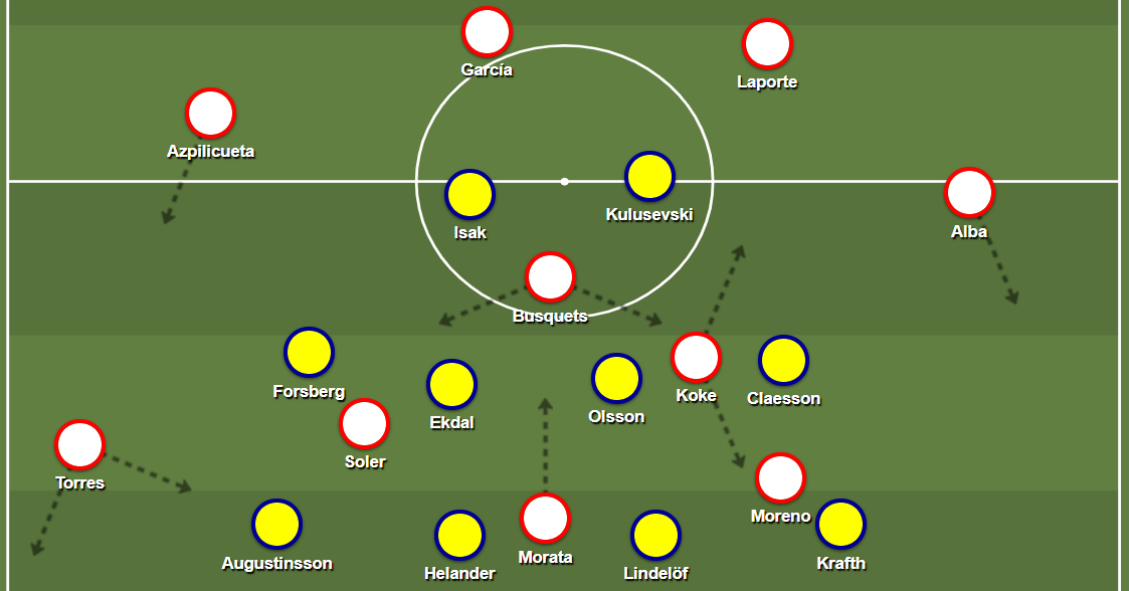