Pochettino needs time in an environment where time is a luxury.

Tottenham show flashes of their brilliance in possession but ultimately lack the midfield control to secure the victory.

Tottenham Hotspur’s dream run to the Champions League final capped off their best season in decades and represented the extent to which a manager could maximize his squad’s talent. Their deep Champions League run also covered up a downward spiral in Premier League form, where Tottenham failed to win an away game since January and picked up a meager four points in the last five games of the 2018/19 campaign.

Fatigue is the easy explanation for this. Tottenham declined to make a single signing in the previous two transfer windows, forcing an undermanned midfield to carry out Mauricio Pochettino’s intense tactical style following a World Cup summer. Chairman Daniel Levy has sought to rectify this issue by purchasing Tanguy Ndombélé and nabbing Giovani Lo Celso on loan, but injuries to both of them have prodded Spurs into a slow start.

Despite creating enough expected goals The amount of goals a team is expected to score based on the quality of the shots they take. per game to put them fourth in the league, their underlying defensive numbers rank eleventh. This supports observations that Tottenham have struggled to control midfield – something that has been further affected by Christian Eriksen’s poor form. Given that he is one of only a few quality playmakers in the side when accounting for Lo Celso’s injury and Ndombélé’s rocky start to the season, it is not a big mystery as to why Spurs are struggling.

Pochettino needs time in an environment where time is a luxury. Regardless of the circumstances, Levy and the fans expected a win going into the game against Leicester and it was up to their manager and their team to deliver.

Brendan Rodgers and his side were, of course, not willing to oblige; Leicester have garnered a reputation as ‘giant killers,’ having drawn against Liverpool and defeated Manchester City last season. These results have come through a steadfast appreciation of the transition game and impressive defensive organization.

Jamie Vardy has been the spearhead of this strategy and has become notorious for scoring against the Premier League’s top six. Unsurprisingly, he was chosen to lead the line in Leicester’s 4-3-3 formation against Tottenham. Dynamic central midfielders James Maddison and Youri Tielemans sat behind him, flanked by wingers Harvey Barnes and Ayoze Pérez. Wilfred Ndidi protected center-backs Çağlar Söyüncü and Jonny Evans while fullbacks Ben Chilwell and Ricardo Pereira played out wide. Kasper Schmeichel was chosen in goal.

Pochettino selected a 4-4-2 diamond shape and deployed Harry Kane and Heung-Min Son as the strikers ahead of ‘number ten’ Erik Lamela. Ndombélé and Moussa Sissoko operated as the wide central midfielders while Harry Winks functioned as the team’s anchor. Winks shielded a defense consisting of Danny Rose, Jan Vertonghen, Toby Alderweireld, and Serge Aurier. Paulo Gazzaniga started between the posts. 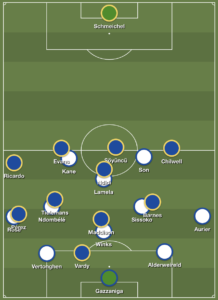 Leicester’s pressing structure when Tottenham chose to build down their left.

When Spurs played the ball to one of their center-backs, Vardy would curve his run in order to cut off access to the far side The far side is the side of the pitch where the ball is not. and force Tottenham to the wing. Vardy’s movements would spark one of Maddison or Tielemans into action, who would step up to mark Winks. To keep the structure balanced, the relevant Leicester winger would pinch inwards.

If Tottenham did manage to play the ball to their far side center-back, the central midfielder on Winks would push up to create a momentary 4-4-2 pressing structure while Leicester’s entire shape shifted towards the opposite flank.

Leicester’s organized and intense setup significantly troubled Spurs and turned many of their possession spells into a game of fifty-fifty duels. Pochettino’s men struggled trying to build down their left in particular. Ndombélé was clearly rusty after only recently returning from injury and both Kane and Son did not drop deeper to help progress the ball down that flank. On the right side, it was quite the opposite, with Kane moving from his nominal position on the left to facilitate play. Consequently, Spurs managed to string together rapid passing sequences that broke lines and advanced play upfield on that wing.

That pattern of play put Tottenham in front in the 29th minute. After a clearance from Söyüncü, Aurier quickly played a one-two with Sissoko before finding Lamela in the right halfspace. If you divide the field in five vertical lanes, the halfspaces are the lanes that are not on the wing and not in the center. Because there is no touchline like on the wing, players have the freedom to go everywhere. But this zone often is not as well-defended as the very center. This makes it a very valuable offensive zone to play in and a lot of chances are created by passes or dribbles from the halfspace. The lanky Argentinian picked up his head and played a through ball to Son. Kane, who had dropped to help his team, quickly changed gears and rushed towards the box to latch onto Son’s backheel pass. Kane was shoved in the process, causing him to stumble towards the ground as he casually planted a shot into the top corner.

When Victor Wanyama came on for Sissoko in the 67th minute, Spurs’ right-sided buildup collapsed and Leicester took advantage. In the 69th minute, Wanyama’s pass was intercepted and Barnes played the ball out to Vardy on the left. The return ball flew behind Barnes but was picked up by Ricardo and tucked away into the back of the net.

Even when Tottenham had the lead, they did not appear to be fully in control. In fact, Leicester had been the more threatening side up until Kane’s goal, due to the chaotic nature of the game that they were partly responsible for. The constant turnovers and fifty-fifty duels created moments where Vardy could be set free and Leicester’s fullbacks could bomb forward.

However, Vertonghen and Alderweireld did well to deal with those instances and many of the crosses that came from said counterattacks were inaccurate. Thus, perhaps surprisingly, Leicester were more dangerous in regular possession play in the first half. 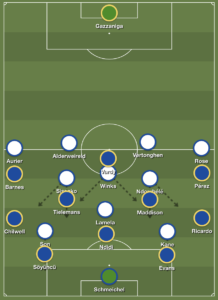 Tottenham’s starting 4-4-2 diamond shape when engaging in a high press.

This was especially impressive given that Spurs pressed high up the pitch themselves. They mimicked their opponents by looking to stay horizontally compact while sacrificing a bit of defensive width. Depending on which side Leicester decided to build play through, either Sissoko or Ndombélé would step out onto the fullback while Winks shifted over.

Leicester sought to progress the ball via long balls that reduced the game to fifty-fifty duels or by using their winger to play wall passes A one-touch pass that quickly sends the ball back to sender. In the meantime the sender has quickly moved into free space, and he momentarily escapes pressure. into the near side central midfielder. Leicester did not always get into the middle third If you divide the pitch in three horizontal zones, the middle third is the most central area. in the most beautiful fashion, but, when they did, they aimed to quickly rotate the ball to the opposite flank in order to take advantage of Tottenham’s narrow shape.

Leicester’s fullbacks Chilwell and Ricardo would then burst down the overlap When a wide player, most of the times a wing-back, runs outside to fill in the space left by a winger going inside with or without the ball, this is called overlapping. to put in crosses while Maddison and Tielemans sat on the edges of the box in case they got the chance to shoot from distance or dribble at the defense. Maddison got the latter opportunity in the 15th minute, when he glided past two players and fired a shot on goal. The resulting corner was cleared to Tielemans who took a shot that Gazzaniga spilled. Pérez pounced on the rebound and Ndidi followed up to tap in the goal, but it was ruled out correctly for offside.

Maddison, one of the most impressive players on the night, would finally make his mark in the 85th minute. Following a Chilwell long pass that Alderweireld headed into the air, substitute Hamza Choudhury won the second ball and found Maddison in the center of the pitch. Free from any marking, Leicester’s number ten cut onto his right foot from outside the box and pummeled the winner past Gazzaniga.

A loss may be a harsh result for Spurs given the low likelihood of Maddison’s goal going in, but there is no doubting that they were outplayed for significant portions of the game. They were unable to rely on their possession game when they needed to take the sting out of proceedings and their press curiously waned in the second half. Time may prove to be the ultimate solution for Tottenham, but Pochettino needs to find a short-term fix so that his team can stay competitive while the adjustment period occurs.

As things stand on Saturday, Leicester sit third in the table after six games in the Premier League. Brendan Rodgers has effectively tapped into his side’s counterattacking identity while creating a similarly direct, but proficient, game plan in regular possession play. If this continues, his return to England’s top flight competition may be enough to wash out the sourness of his departure in 2015.