Thanks to their trademark pressing and transitions, Liverpool eventually cut through and punished an Arsenal team devoid of a game plan. Once Jürgen Klopp’s team found their formula, they relentless carved through Arsenal’s defensive block, in desperate need of structure in the big matches.

Considering the trajectories of their respective campaigns, one can be surprised that Liverpool and Arsenal went into this game just two points away from each other. Yet this was a fixture that could defy just where these two teams can get too.

Liverpool steamrolled their way through the start of the season, back to being Europe’s top attacking outlet with fresh ideas down the right side of their attack. More recently, the Premier League’s high flyers; Brighton and West Ham, have proved to be more difficult opponents, inflicting their first defeat of the season. The cruel mistress of injuries also lingers a squad, which has already faced its wrath earlier on in the year.

August blushes made us assume Mikel Arteta’s fate, yet the resurgence of Arsenal has them firmly in the European places. Their structure may yet to be ‘passing perfection’, but new profiles around the back has seen Arsenal heavily improved when compared to this time last year. Emile Smith Rowe’s work down the left has proved to be an important component, having scored in his last three games and earning an England call-up.

Jürgen Klopp made two changes, to the team that were defeated in the capital two weeks ago. Andrew Robertson missed the squad entirely due to injury, whilst Jordan Henderson was only fit enough to make the bench. Konstantinos Tsimikas and Thiago Alcântara were ahead in their places.

Arteta’s only change came in the midfield, from the side that won against Watford. Ainsley Maitland-Niles was dropped to the bench, as Thomas Partey returned from a muscle injury.

From the start, Liverpool put themselves in total control, with a press that throttled Arsenal’s buildup approach and pinned their opponents in their half, after initial phases of pressure. Trademark Liverpool pressing, out of the 4-3-3 formation, forced Arsenal to put the ball in very uncomfortable positions and yield in possession or send the ball over the top, for the centre-backs to sweep up. 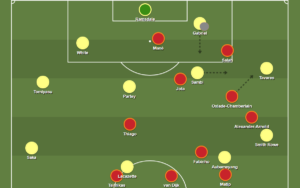 1st minute: Liverpool’s trademark pressing out of the 4-3-3 formation comes into effect, as Arsenal are forced inwards and towards a pressing trap. The result was Nuno Tavares having to go long down the channel.

Their success came through squeezing central spaces effectively, having forced Ben White or Gabriel down narrow corridors. They did this with Mohamed Salah and Sadio Mané’s pressing triggers facing inwards, whilst Diogo Jota marked the closest central midfielder to the ball. The staggering between the forwards and midfielders enabled Alex Oxlade-Chamberlain or Thiago to commit higher up, whilst Fabinho was in a position to mop up and recycle the ball behind.

Liverpool put Arsenal in awkward positions early on; Ben White attempted a carry through lines of pressure, only to be turned over in the middle of the field, whilst Arsenal was constantly forced to play long channel passes, once the full-backs got in possession.

In possession, Klopp’s team were in their usual 2-3-5 shape, with various positions being taken between the forwards as Jota roamed out of the nine space and switched with Mané. Unlike most Liverpool performances, it was down the left that saw most of the exchanges, especially between Virgil van Dijk and Thiago.

However, getting the ball into the final third, against Arsenal’s 4-4-1-1 medium block, proved difficult in the early stages. This was because Arteta’s team weren’t drawn out of their defensive block that much, whilst the trio of Liverpool forwards hadn’t found the separation needed from their markers. Bukayo Saka provided a more narrow press, out of the wide position, which did give Tsimikas more room to move into behind him. Although Liverpool had gained control, they didn’t create a lot of chances in the first period of the match.

To gain access further forward, Liverpool’s center-backs dropped deeper in the build to draw Arsenal out of their medium block. With Saka moving forward, this encouraged Thomas Partey to step up higher, whilst Albert Sambi Lokonga wasn’t entirely disciplined in tracking Jota, as well as Mané, who dropped into such spaces.

With a passing lane open, directly through Arsenal lines, Liverpool could move into a lot faster moves, as well as having more space between the lines to compensate. Their passes and exchanges were quicker towards the end of the half, as well as a lot more directness from deep to get the ball out wide. Tsimikas and Trent Alexander-Arnold accessed dangerous areas as a result.

Towards the end of the half, Liverpool created much better chances. Thiago’s volley was well saved by Aaron Ramsdale, stemmed from Fabinho’s direct pass into Alexander-Arnold down the right flank. Counterpressure from Tsimikas led to a cutback from the left-back, into Salah, who was inside the six-yard box, only for his attempt to be straight at the goalkeeper.

Liverpool put Arsenal under immense pressure, with a flurry of chances towards the end of the half. Eventually, Klopp’s team broke through, six minutes before the end of the half. An excellent set-piece delivery from Alexander-Arnold was tailor-made for a head at the back post to send it into the far corner, Mané was the man to connect.

Suffocation at its finest

The second half was defined by the relentless pressing Liverpool deployed, as Arsenal’s backline constantly gave up possession in their defensive third.  When passing around the back, Arteta’s team are set up in a basic 2-4-4 formation, with very little rotation or out ball, to evade such pressure. With no patterns to move the ball through the lines, Liverpool had a very easy task in isolating their opponents, especially the full-backs who were most disconnected. 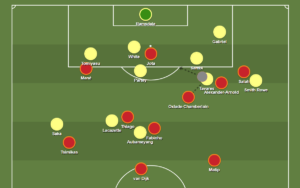 With effective staggering from the forwards, closing down angles, it was the aggressive triggers from Oxlade-Chamberlain and Thiago which took center stage. Both men squeezed space relentless on the counterpress, a trigger which forced riskier passes out wide or backwards. Liverpool relished these moments and was clinical on the transitional moves that they entered. Oxlade-Chamberlain had a shot just wide of the post, which followed Fabinho intercepting a pass to Pierre-Emerick Aubameyang.

Jota bagged Liverpool’s second, just six minutes into the second half. As Nuno Tavares carried the ball out, Oxlade-Chamberlain’s counterpressure forced the left-back to pass the ball backwards, a move that Jota had anticipated, as Partey remained static. Jota kept composure, easily moving past a sliding White, whilst Ramsdale also committed before he shot the ball at an open net.

After this point, Liverpool could have scored more from a similar pattern. Thiago pickpocketed Takehiro Tomiyasu on the left, as the full-back was left with zero options around him once the pass was made to him. Oxlade-Chamberlain also spearheaded a counterattack, aided by an excellent wall pass from Salah into Jota, but a heavy touch was enough for Ramsdale to dive in.

Tearing through on the counter

Klopp’s team continued their counterattacking onslaught as the game continued, getting into transitional moves by directly moving the ball from deep. This involved longer distribution with Arsenal’s full-backs committed higher up the field, and the wide forwards able to isolate White and Gabriel out of their central positions. 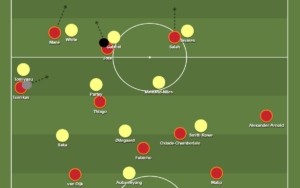 Liverpool teased with several transitional moves but powered through after seventy minutes. Alisson Becker’s long ball to Tsimikas forced Tomiyasu to press high, whilst the passing angle to Jota was not closed. A through ball into Mané created a two-versus-one with Salah towards the back post. The simplest of finishes for the league’s top goalscorer.

A few moments later and similar spaces behind the Arsenal fullbacks opened up again. Tomiyasu was forced to confront Tsimikas again, and although Arsenal initially slowed down the transition, an overlapping run from Alexander-Arnold sparked the attack again. A cutback across goal was met by substitute Takumi Minamino for yet another easy finish for a Liverpool attacker.

Difficult first phases, at least in possession, was followed by a routine victory for Liverpool. Though only five points separate Liverpool and Arsenal, one is a significant level above the other – just the twenty-eight goal difference between them.

Although Arsenal came into this game in good form, the lack of change in matches like this begs the question of whether there has been actual progress under Mikel Arteta. The approach hasn’t changed in the two years he has managed, yet you can also make a case for there being no approach to begin with.