Changing game states failed to separate two Premier League title contenders, desperate to get back on top. Liverpool set an intense tempo early, while Chelsea threatened on the transition. However, the outcome of an old-fashioned goalmouth frenzy reshaped the events of the second half.

To reshape their clubs, Liverpool and Chelsea turned to graduates of Mainz to achieve ultimate European success. Now they turn their heads to regaining the English crown, an early matchup against each other would be a strong indicator.

After a chaotic title defense, Jürgen Klopp has got his long-term absentees back. None have been more important than Virgil van Dijk, whose long switches towards the right can ignite Liverpool’s wide rotations; their recent 2-0 win at home to Burnley being a good example. Although they haven’t bolstered their squad depth, compared to other title challengers, the makeup of the title-winning team has not changed.

Chelsea got their first experience with Romelu Lukaku up front, and the results were pretty definitive. The ball to Lukaku is predictable, but stopping such a ball, and the versatility that comes with it, is a different story. Chelsea feels complete: in a system that is already strong in all aspects, they have now added even more attacking patterns to their play.

Liverpool made three changes to the team that beat Burnley last weekend, in their trademark 4-3-3 formation. Andrew Robertson returned to the left-back position, as Konstantinos Tsimikas dropped to the bench. Brazilians Fabinho and Roberto Firmino also came into midfield, ahead of Naby Keïta and Diogo Jota.

Thomas Tuchel made just the one adjustment, to the team that dismantled Arsenal at the Emirates Stadium. This involved N’Golo Kanté, who returned to the midfield, as he replaced Mateo Kovačić.

Flying out the blocks

Games at Anfield haven’t exploded into life, over the last year. However, this was the closest to a high intensity, high tempo Liverpool team that we have seen for a couple of years. Klopp’s team pressed frantically but methodically, while moving the ball at similar speeds, thanks to overloads When one team has more players in a certain area or zone than the other team. on the right.

Liverpool’s 4-3-3 system matched well against Chelsea’s 3-4-2-1 formation. They could press man-for-man and squeeze space for the receiver very quickly, but what was key to their successful press was the coverage they had vertically and the traps they could deploy. 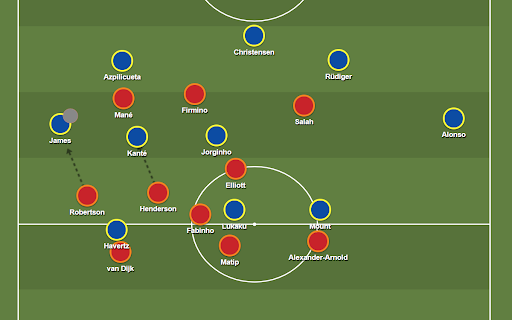 2nd minute: As Reece James received the ball, he was met by pressure from Andrew Robertson, Jordan Henderson moved high onto the next receiver and Sadio Mané moved into a slightly deeper position. Pressing trap created.

When a press was triggered, Liverpool’s midfield backed up with similar movements to stop the ball coming back inside, while the forward on the same side of the field dropped to cage Chelsea in. For example, when a pass was made out wide to Reece James and Andrew Robertson pressed him, Jordan Henderson moved high up on Kanté while Sadio Mané dropped to create an overload.

Creating these traps was very successful in disrupting Chelsea’s deep circulation. Liverpool’s staggering was excellent and these rehearsed pressing patterns enabled them to win the ball back in the middle third, before establishing themselves in possession. The intensity of the first fifteen minutes ignited an entertaining affair, between two high-quality systems.

To counterpress or counterattack

Chelsea started to yearn for Romelu Lukaku, to help get past the middle third, and hit longer passes, over the defensive line, to access him. One of these moments led to a corner, as Chelsea worked off a throw-in they had won. Kai Havertz executed an excellent looping header, over the goalkeeper, from front to back, to put Tuchel’s team ahead.

What followed was an excellent matchup, between Liverpool’s wide rotations and low crosses against Chelsea’s transitional play.

Liverpool had two regular sequences when they regained possession: both involved directness and forced Chelsea players in one area, to get a shot off in another. From deep, Liverpool attempted a vast amount of long balls, hitting them directly down the center. These balls aimed for Mané runs before they counterpressed After losing possession, a team immediately moves towards the ball as a unit to regain possession, or at least slow down the pace of the counterattack. on the second ball.

On the ball, Liverpool’s regular routes were down the right side of the field, where they caused several issues for Chelsea. Not only did they create a great number of overloads, but the flexibility of the personnel enabled them to pick up different positions and create space for the cross. 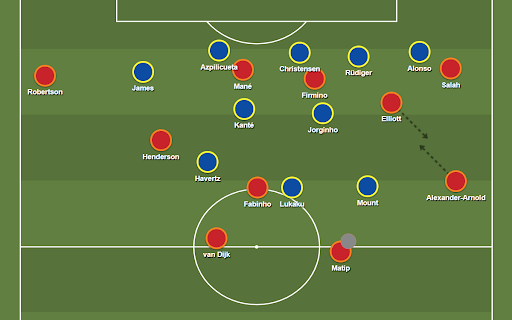 Liverpool’s 2-3-5 buildup structure versus Chelsea’s 5-2-3 medium block. Overloads and rotations down the right enabled a lot of passing moves to flow down this side of the field.

Trent Alexander-Arnold could hug the touchline, but his positioning was a lot more central, moving in from the right halfspace, If you divide the field in five vertical lanes, the halfspaces are the lanes that are not on the wing and not in the center. Because there is no touchline like on the wing, players have the freedom to go everywhere. But this zone often is not as well-defended as the very center. This makes it a very valuable offensive zone to play in and a lot of chances are created by passes or dribbles from the halfspace. which allowed Harvey Elliott to overlap and pick up free positions, with Marcos Alonso pinned. Klopp has been able to implement youth products, like Alexander-Arnold and Curtis Jones, as if they have been part of the team for years and Elliott proved he is no exception. His touches down the right offered verticality and allowed Mohamed Salah to pick up positions near the touchline, which dragged Chelsea’s defense out further. 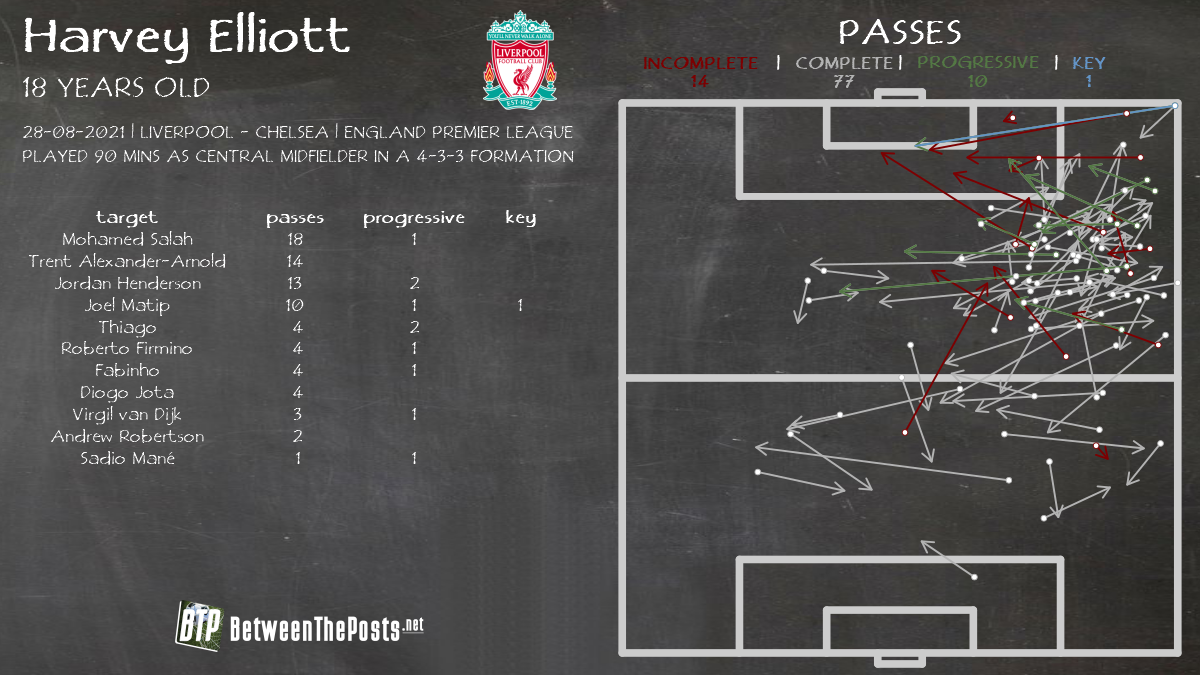 Liverpool’s versatility caused Chelsea issues. Fabinho, Firmino and Mané could all join in the rotations down the right to create a low cross or cutback chance. Unfortunately, the execution of such moves was not as efficient as the craft. Chelsea still had numbers in the box and defended these situations effectively.

Once they had gone ahead, Chelsea produced their most dangerous phases of the match on the transition. Space was afforded, due to Liverpool stepping up ten to fifteen yards further forward on the ball. Kanté and Lukaku found pockets of space to drive into, in front of the center-backs, while Mason Mount and Havertz moved into areas wider to keep their opponents stretched.

Chelsea got into excellent positions on the break, but such sequences were not as refined as one would expect. There were a few occasions where a different passing option was available, but Chelsea also failed to execute in and around the penalty area. Nevertheless, an exciting game that remained in the balance.

One scramble changes the next forty-five

Both teams had kept the momentum up to this point. Liverpool controlled the ball, but Chelsea were not refined to their half and had transitional ability to partner this. Roberto Firmino, due to a slight injury, was replaced by Diogo Jota, whose first real involvement was to receive a line-splitting pass from Robertson on the half-turn, drive the ball forward between César Azpilicueta and Andreas Christensen, to win a corner for Liverpool.

What followed shaped the next forty-five for both teams. A remarkable goalmouth scramble, which saw Joël Matip hit the crossbar, resulted in a penalty being awarded for Liverpool and a red card dished out for a goal line handball by Reece James. Salah converted and the game state changed dramatically for the second period. Klopp’s team gained more control, Tuchel needed to adapt to keep shots at a minimum.

How to restrict with a man less

Tuchel made several adjustments. Havertz was replaced by Thiago Silva, which saw Azpilicueta move into the right wing-back spot. Mateo Kovačić came off the bench for Kanté, which is a like-for-like change but not necessarily a downgrade. Mount’s position also changed as he moved over to the right side of the field.

Out of possession, Havertz, positioned on the right, could also drop into the midfield line to build compactness, once the forward line was beaten. Mount fulfilled a similar role, but his spacing was already deeper, as well as the rest of the team.

With a man less, Chelsea adapted to keep their out-of-possession principles in place, as well as a defensive shape that is not dissimilar to their usual setup. Chelsea were in a 5-3-1 formation, which established itself in a medium-to-low-block and allowed Liverpool space out wide until they reached the corners of the box. 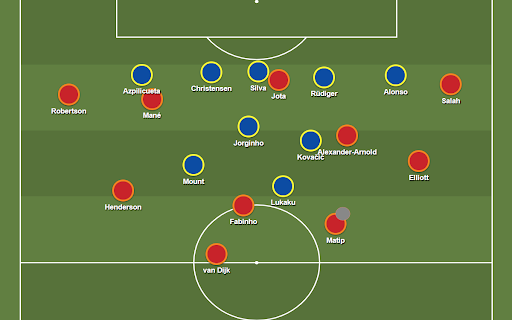 Chelsea’s 5-3-1 medium-to-low-block, as seen in the second half. Central compactness intact, able to shift into wider positions, thanks to Mount tucking further infield to maintain balance.

Chelsea’s organisation and staggering, within the defensive setup, restricted Liverpool in possession. With the tempo of the match lowered, Liverpool did not break into the same rotations at the same pace of the first period. Alexander-Arnold and Elliott were still picking up different positions, around the right side of the field, but without the Chelsea defensive block stretched or pulled apart.

To alleviate pressure, Tuchel’s team were still able to break into a few passing patterns to get forward. Most notably, a third man run A passing combination between two players, while a third player simultaneously makes a run, usually in behind the opponent’s defensive line. After the initial combination, the ball is quickly played in depth for the third player to run onto. behind Liverpool midfielders was able to get Chelsea out of their half and funnel play towards the right, with Lukaku and Alonso at the back post. However, these situations were few and far between and Liverpool only had to retreat numbers to quickly overload the box.

Liverpool still had a good amount of attempts, but not of the quality required to pierce through. In another world version of events, Klopp’s team would have scored one of the fourteen shots they had in the second period and although some of the attempts would test Edouard Mendy, Liverpool was not able to break a resilient defensive display. 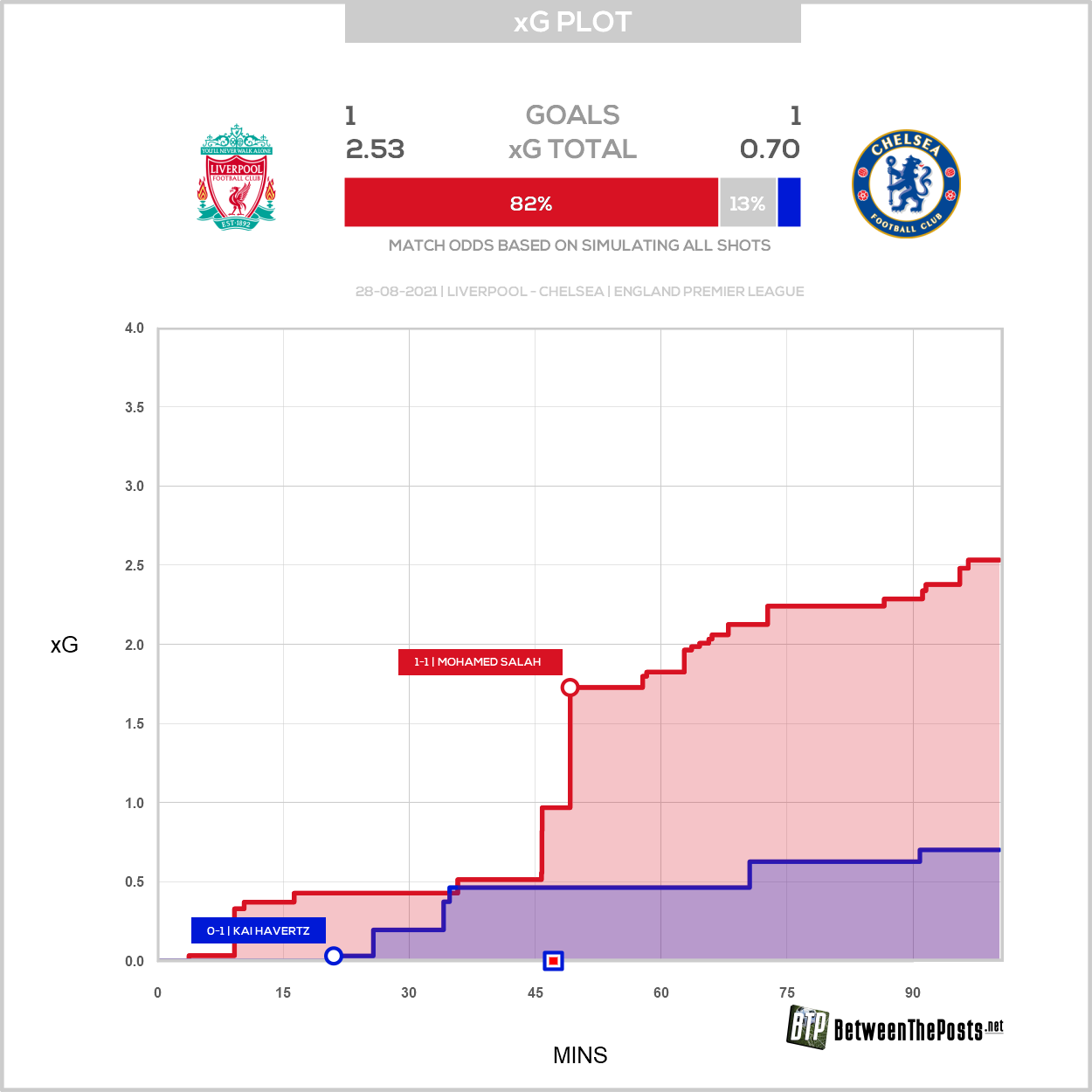 This may not have been the desired result, based on the game, but it was a convincing performance from Liverpool. Chelsea has showcased how difficult it is for teams to press them since Tuchel has arrived, but Liverpool put them in an uncomfortable position, especially in the first fifteen minutes. A good run of September fixtures could see them in a great position by October.

Despite being a man less, Chelsea were able to keep one of Europe’s best offensive forces quiet for forty-five minutes. It is a testament to just how well-coached this team is, in the same system that they have been in since day one under Tuchel. His team will be put under more pressure, after the international break, with Tottenham and Manchester City patiently waiting. 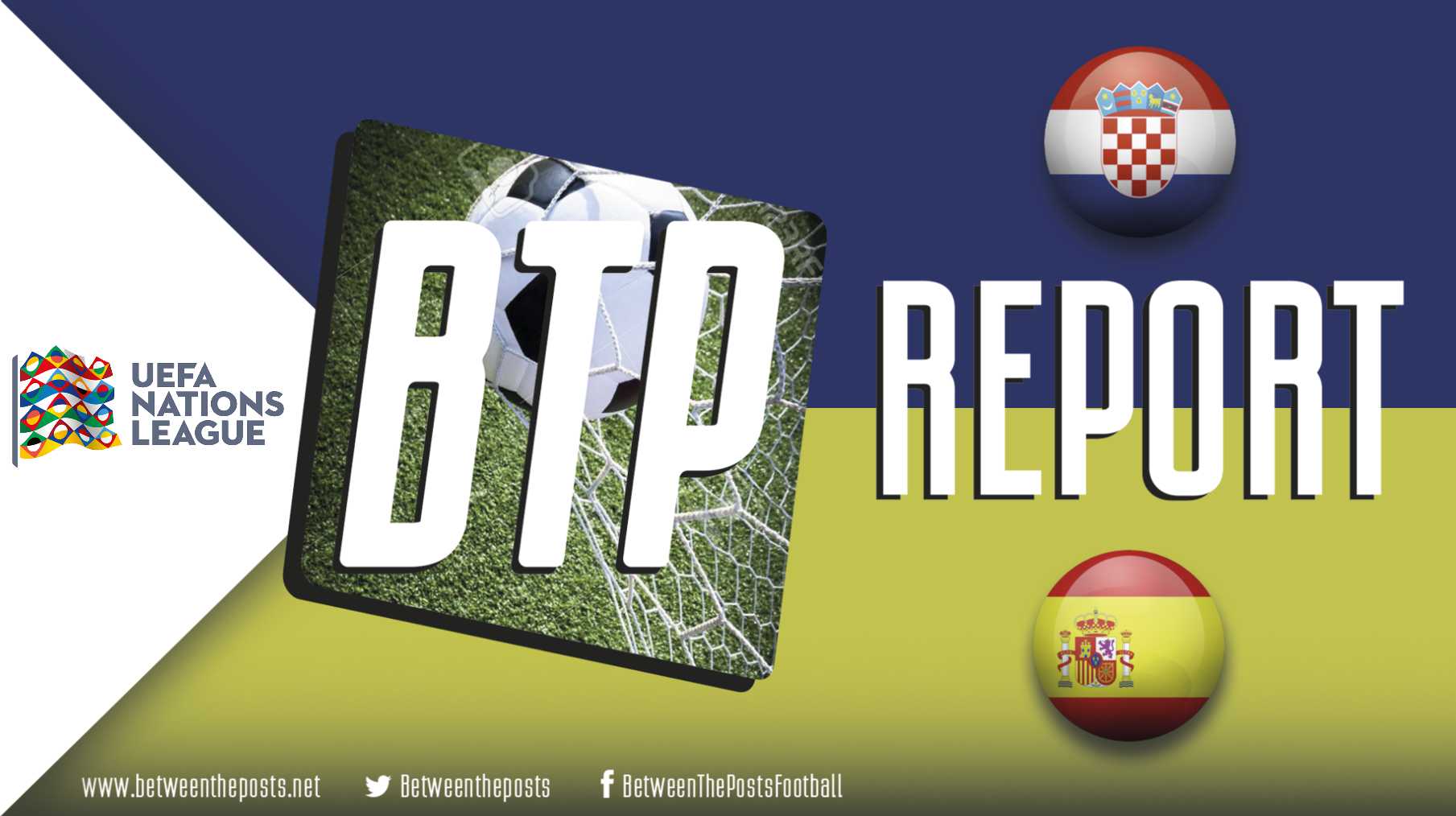 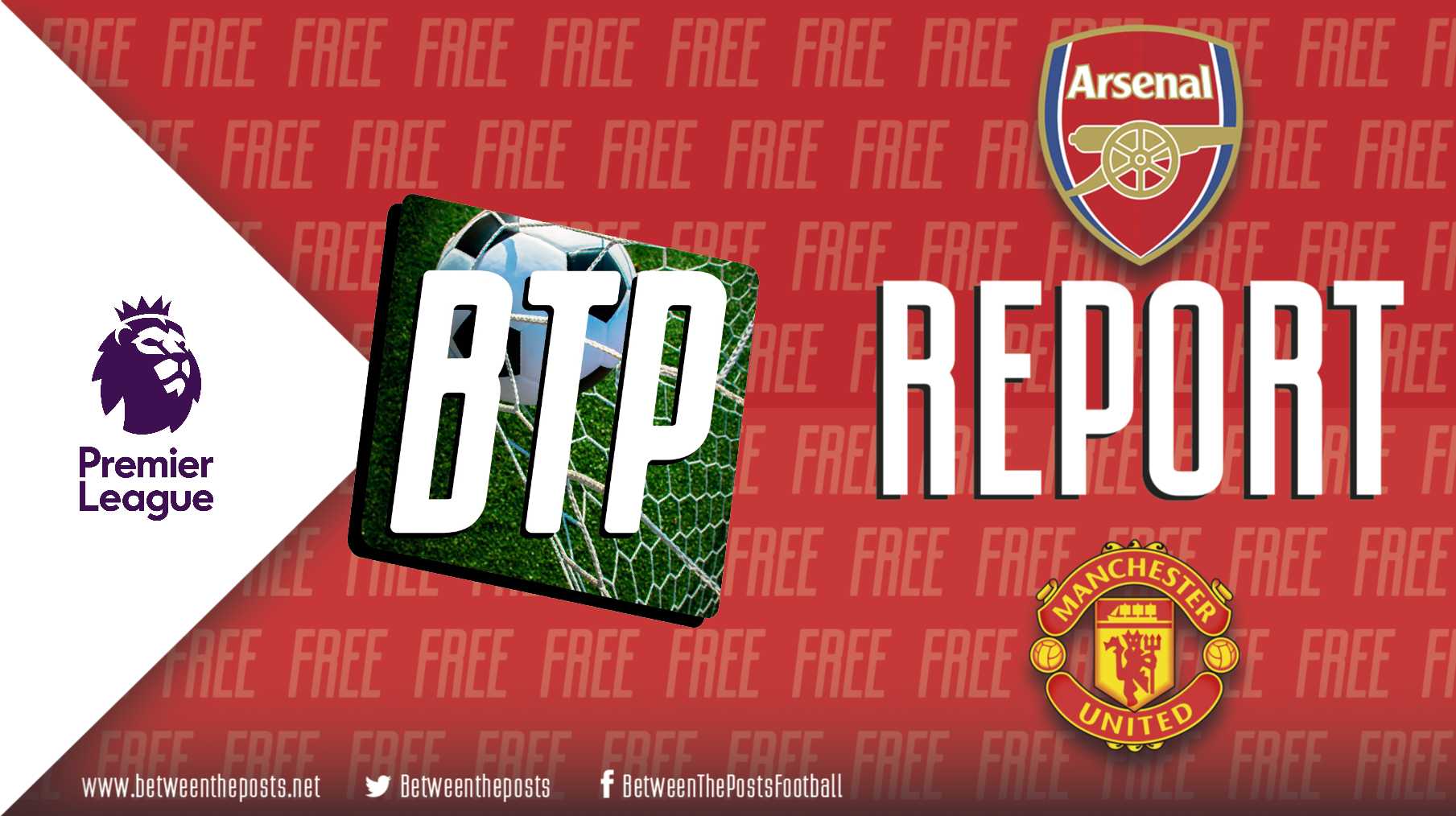