A raft of injuries, six goals, and a tense penalty shootout gave spectators at Anfield an early Christmas gift. Leicester’s 4-4-2 diamond shape pierced at the heart of a new look back four, but Liverpool made the most of favorable circumstances to turn the tide in a thrilling tie.

Amid a hectic winter schedule, the Carabao Cup often seems to be expendable. However, troubling times often reveal true intentions, signaling the contrasting directions of the two sides in this fixture.

Liverpool have looked back to their old selves in the new season, sitting second in the league while firing themselves to the top of the scoring charts. Yet, trialing a brand new midfield at Spurs, a 2-2 draw may have forced Jürgen Klopp’s hand in his pursuit of silverware. Willing to forego the Carabao Cup in the past, the COVID crisis could prompt him to put all of his eggs into one domestic basket.

Indeed, such a dilemma could be the perfect storm for Leicester City. Out of the Europa League, they have continued to underwhelm on the home front, where erratic displays have already left them ten points off the fourth spot they fought for in the last two campaigns. The depth of talent in the squad makes this scenario all the more frustrating, so could another cup run lift the mood in the Midlands?

In the past, Klopp’s retorts have directed focus away from issues on the field. Heavy rotation backed up the return of this strategy for this clash, where only Tyler Morton held onto his spot in the lineup. Older heads Jordan Henderson and Roberto Firmino featured further afield while new blood stepped up at the back. Caoimhín Kelleher came in for Alisson, and Billy Koumetio made his first senior start.

On the other hand, Brendan Rodgers could afford to rely on more seasoned figures. A lack of options at center-back saw Wilfred Ndidi partner Çağlar Söyüncü at the heart of the back four, but the outlook of the outfit was more familiar in the last two thirds. Among those to come back into the fold off the back of the 4-0 rout of Newcastle United were Youri Tielemans, James Maddison, and Patson Daka.

Moving away from a 4-2-3-1 formation, Rodgers selected a 4-4-2 diamond system here. His men set off at pace, pressing high up the field to unsettle the hosts on the ball. The front two guided the play out to the flanks while Maddison added more compactness in the center, initially covering Morton. 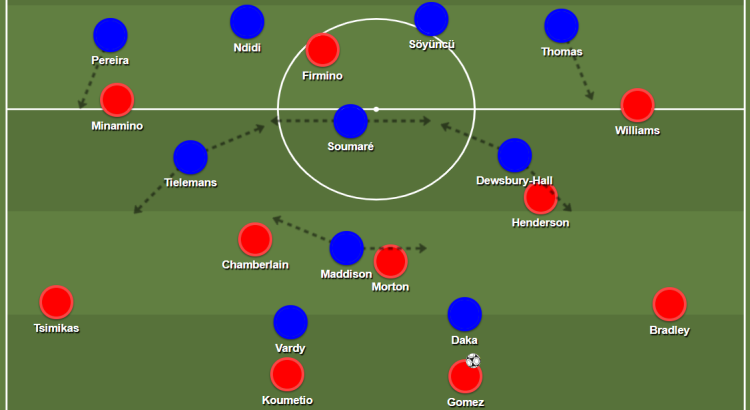 Leicester’s diamond pressing scheme with wide pressing traps from the first half.

From here, the central midfielder on the side of the ball pushed out diagonally to close down the fullback while his teammates shuffled to cover. Boubakary Soumaré stuffed the inside channel, and the central midfielder away from the ball dropped off towards the center circle. A swinging back four completed a pressing scheme that denied Liverpool any shots in the opening quarter of an hour.

Eight minutes in, Liverpool could not say the same. A turnover from Tsimikas gave Leicester the impetus to stride forward. Soumaré nipped in ahead of Alex Oxlade-Chamberlain, played a one-two with Ricardo Pereira, and then swiveled away from Morton. Maddison picked up the pieces on the half turn, sliding in Vardy to his right. His strike beat Kelleher, putting the away team in the lead.

A second sucker punch soon arrived. Three minutes after the first goal, the play ran aground on Liverpool’s right flank, where Dewsbury-Hall set away Daka. Joe Gomez lost his bearings, forcing his partner Koumetio to shift all the way over to the left channel. Now, on the far side, a direct duel between Tsimikas and Vardy came to life. The left back battled hard, but the Foxes’ top marksman was too wily for him. 2-0 Leicester. A sharp brace for Vardy had placed the hosts on the backfoot.

🗣️"When we played the right football we were good."

However, it would not be a cup match at Anfield without a spirited response. In the 19th minute, Tsimikas knocked the ball over Pereira before clipping a cross into the area. Williams headed the delivery into the path of Firmino, who held off Ndidi and laid a pass back to the edge of the box. Oxlade-Chamberlain’s firm effort beat Kasper Schmeichel to bring his team back into the game.

Over time, Liverpool began to spend longer spells on the ball in Leicester’s half. Interplay through the flanks to work in the spaces on either side of Soumaré held the key to breaking a centrally dense block. However, they did not always find neat solutions, especially on the right flank where sloppy turnovers handed Leicester the impetus on the break.

Flanks are the new centre. pic.twitter.com/yaPfkDVwbS

In their rarer spells on the ball, Leicester’s plan was evident. The dual athletic threat of Vardy and Daka stayed on the last line to continually occupy the back four. Maddison roamed from the ten position to deeper zones where he could help Soumaré while the central midfielders could rotate wider to invite the fullbacks to offer width higher up the pitch. Little came from these sequences for the visitors, but another goal was forthcoming.

Conor Bradley slipped a pass down the right wing, but Luke Thomas cut out the play. Dewsbury-Hall then found Maddison, who lined up a rocket from range. The ten was lucky to keep the ball twisting free from Oxlade-Chamberlain, but, from here, he showed his class. A fierce strike drifted through the palms of Kelleher, restoring Leicester’s two goal lead.

A two goal deficit wedged Klopp into a blatant dilemma. Stick with the youth and consign oneself to defeat or twist through turning to the bench for inspiration? The manager picked the latter option, making three changes before the restart. A straight swap at the back saw Ibrahima Konaté come on for his compatriot Koumetio. Morton then came off for Milner, who sat at the base of the midfield. Finally, Diogo Jota replaced Bradley. No new formation emerged since the change let Williams drop in at right back. Leicester held out against an improved outfit, but misfortune struck at the hour mark. 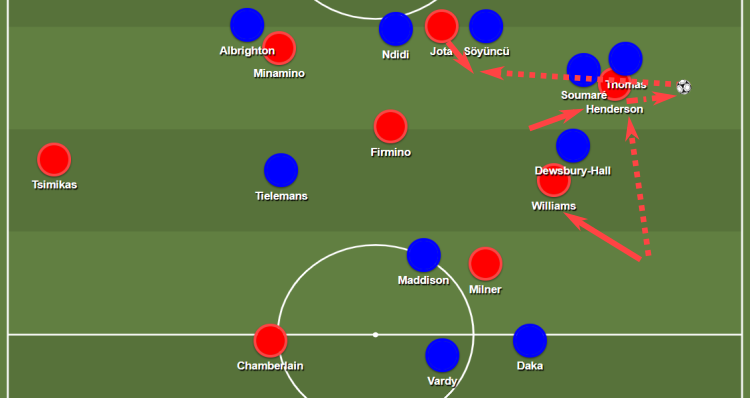 51st minute: offensive combination from Liverpool. Jota’s run pins the central defenders, while Henderson draws Soumaré and Thomas to the right wing before reversing the play to the forward.

Söyüncü made way for Jannik Vestergaard due to an injury, leading to a change in setup. Ryan Bertrand came on in place of Dewsbury-Hill as a left center-back in a back five. The rest of the midfield then shuffled inward, forming a 5-3-2 block. But haphazard pressing from a makeshift backline, along with a waning threat in transition, set the tone for one way traffic from Klopp’s men.

An attack in this phase of the match saw Firmino poke the ball to Minamino, who threaded a pass into the path of Jota. Steadying himself, the forward hammered an effort beyond Schmeichel to halve the deficit. 3-2 with over 20 minutes to go on the clock? The Anfield crowd believed again. The hosts kept racking up the pressure, but it took a surge late in the day to make a difference on the scoreline.

In the dying embers of the contest, Milner picked up the ball. In Hail Mary style, he slung a delivery into the box. Ndidi leaped to head the danger clear only to misjudge the flight of the cross, handing Minamino the chance to bail out the home team. He obliged, chesting down the ball before hitting a volley into the side of the net. A stalemate at full time signaled more drama: a penalty shootout.

A spotless series of six penalties followed, leaving Luke Thomas to slip up first. In the end, Minamino earned the chance to send Liverpool into the last four, but his shot sailed over the bar. So Kelleher had to come to the rescue, smothering Bertrand’s strike before Jota did the rest. Another classic comeback at Anfield had ended with hopes of a first Carabao Cup triumph in a decade still in tact.

Liverpool players mob goalkeeper Caoimhín Kelleher after he made two saves in the penalty shoot-out to take them through to the semi-final 🔴 👏 pic.twitter.com/vnhDqZKpLe

The comeback marked a brilliant night for Liverpool, who are still in the hunt for all three domestic trophies. The return of familiar faces to the lineup helped mitigate problems from the first half, so Klopp’s management of his squad, and timely integration of the youth, will be all the more crucial to the outcome of the team’s campaign.

Leicester’s subpar form persists. It will remain a mystery if the game would have changed were it not for the injury to Söyüncü, but Rodgers will be frustrated to have seen the two goal lead slip. But he will hope to take the positives of the first hour as a trip to Manchester City awaits on Boxing Day. 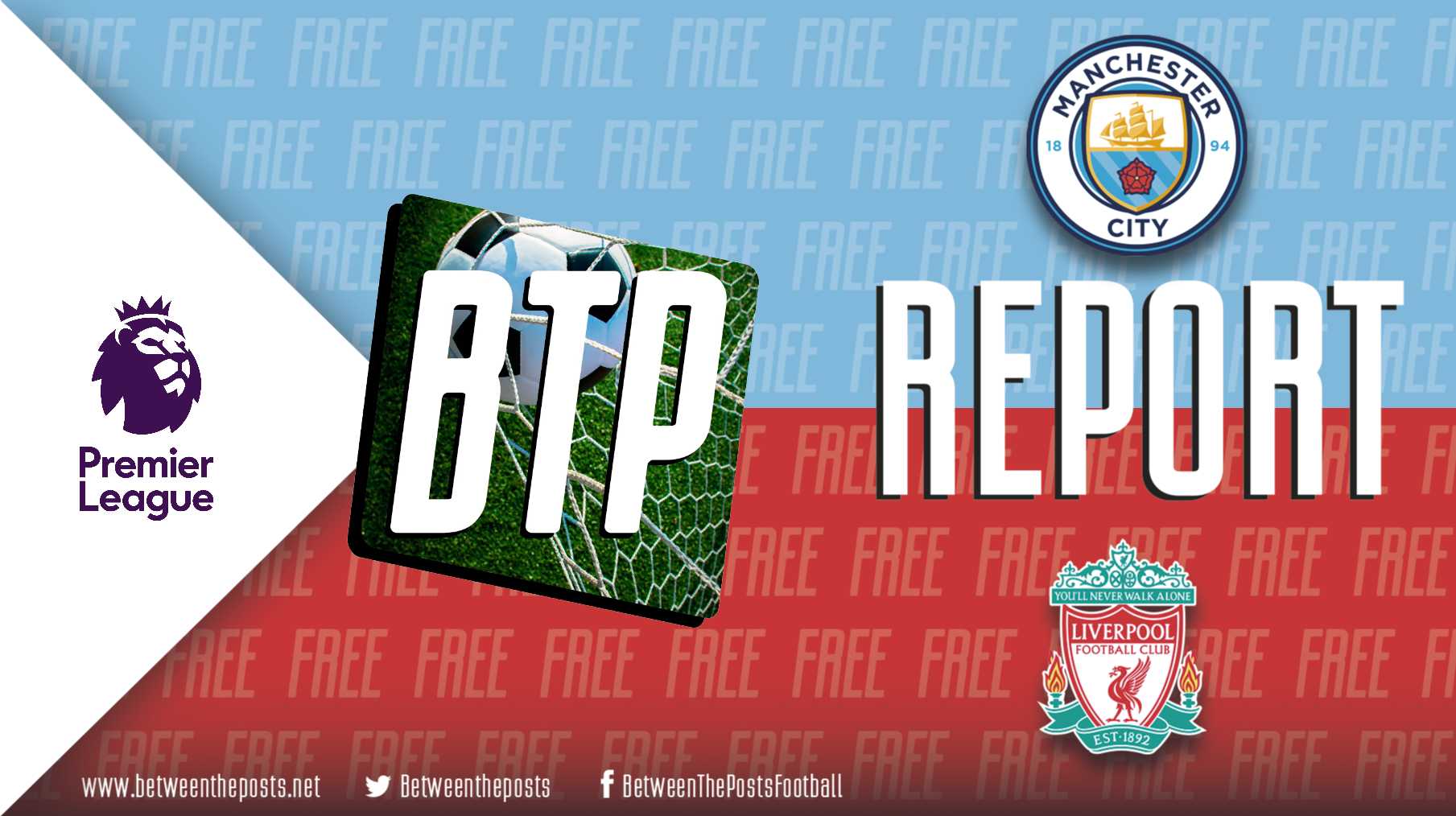 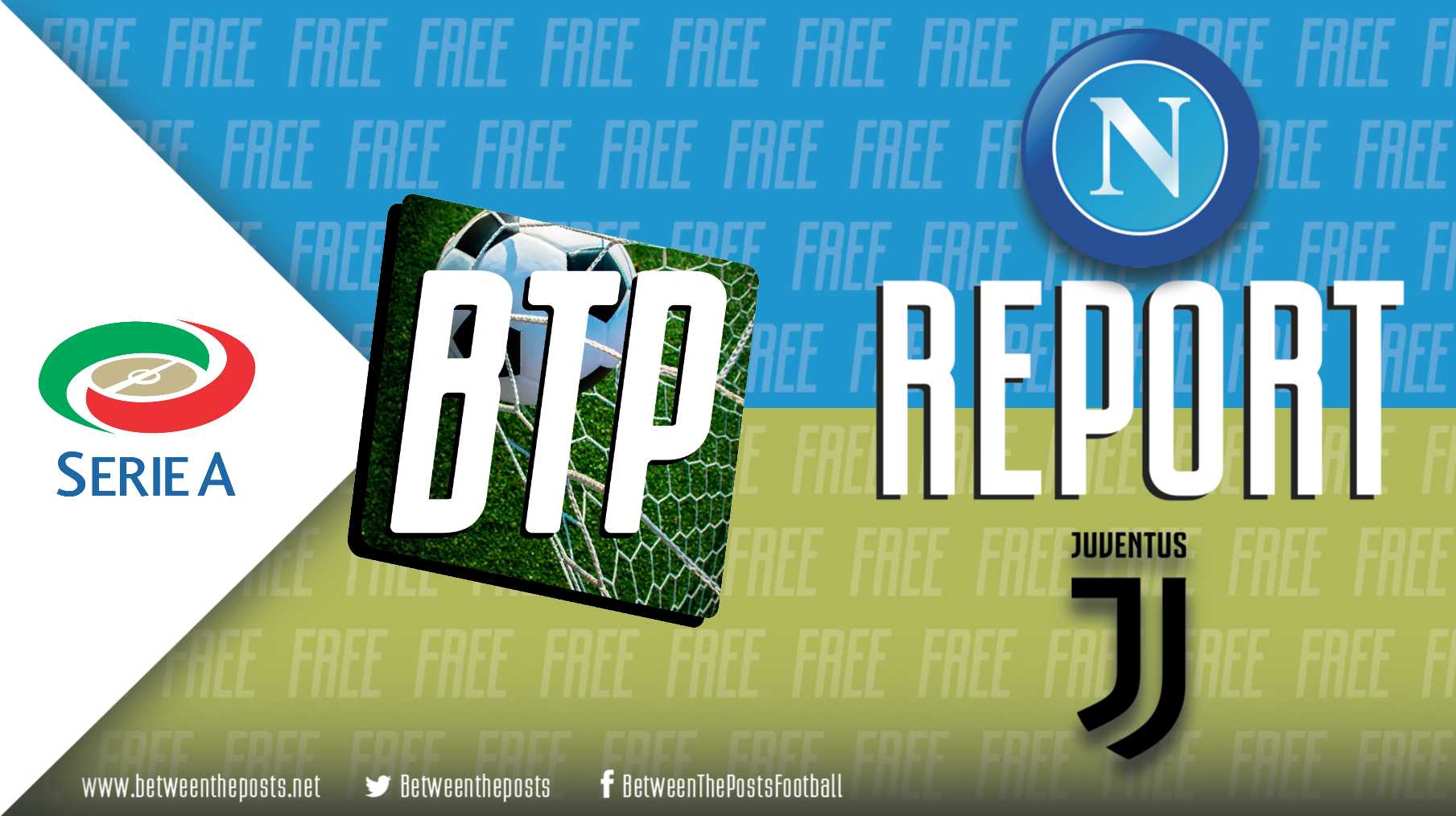 Napoli – Juventus: Napoli’s Organization Too Much For Juve In Small Identity Crisis (2-1)