Not every objective is achieved the same way. From two teams that have borrowed ideas from one another to reach the top of the game, both Liverpool and Manchester City aimed to release the full-backs from work produced by the inside forwards. From this aspect, one team was head and shoulders above the other.

The community shield is the first proper insight into new ideas and concepts that can paint the tactical landscape of the season ahead.

Who better to do this than Guardiola and Klopp? For the best part of five years, their top renovation has been their success without a traditional nine spearheading their teams. Now signings of Erling Haaland and Darwin Núñez will see how both can adapt their game plans to accommodate a ‘proper’ striker.

Adding prolific young forwards to elite attacking systems is a terrifying proposition. City also tended to the Fernandinho-shaped hole by signing Kalvin Phillips whilst Julián Álvarez comes in to bolster the striker spot. Whilst City also made key departures, Raheem Sterling, Oleksandr Zinchenko and Gabriel Jesus, Liverpool saw Sadio Mané on his way, whilst Mohamed Salah signed a new contract. For the first time in a few seasons, it feels like Pep and Klopp have made significant steps into how their offences are going to click, with significant modifications in the market.

Núñez started on the bench as Klopp set up with Salah, Roberto Firmino and Luis Díaz as the front three. Without the services of Alisson Becker, Adrián started between the posts, the only position that Liverpool was missing a regular starter.

Man City was not waiting to deploy their star striker. Haaland was in the team, whilst fellow additions in Phillips and Álvarez had to wait for their introductions. With Fernandinho no longer part of the team, Rúben Dias took the captains armband.

From the get-go, Liverpool and Manchester City exchanged a fair amount of possession: a tempo that didn’t change across the ninety minutes. The aggression from Klopp’s side often comes from the press during this fixture, but their forms of aggressive play came from their usual set-up in possession.

Jordan Henderson often slots into a high-right position once Liverpool breaks into the opposition half, perhaps the biggest way their midfield has evolved in the past few years. Henderson continued to take this position, a key piece to their play that ultimately disrupts the opposition backline.

It wasn’t long until their switching began to cause the greatest amount of threat. On transitions, Liverpool was extremely quick to break the ball out on the far side, where Salah or Díaz was left isolated with a City full-back. Down the left side, Díaz created more curved runs inside to keep Walker central and ultimately open up more space for Andrew Robertson, left free by Riyad Mahrez who wasn’t attached to the Scotsman’s runs. 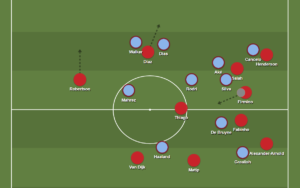 6th minute: Díaz’s vertical run dragged both Walker and Ruben Dias into a more central position, as Liverpool was able to easily slide the ball onto the opposite side due to Robertson’s runs.

Klopp’s team hit their opponents in very similar patterns, which had great success in the second phase of the move that caused Man City to bunch. A direct channel pass, from the center-backs or full-backs, encouraged the City midfield to collapse towards the ball when it was knocked into a central space. Liverpool’s midfield is more than trusted to regain possession in these scenarios, and with the opposition backline distorted, they could make quick progression with a late run joining the offense.

After this point, Liverpool hit Guardiola’s team with the same crossing threat that has seen them elevated to the top. Both Mahrez and Jack Grealish would often drop into the defensive line once Liverpool had worked the ball towards the wide areas, which created the ultimate playground for Thiago Alcântara and Trent Alexander-Arnold to receive on the pass back.

On two occasions, Thiago was allowed to switch, Salah was allowed to cut back and Alexander-Arnold could offer the end product. The first came in the thirteenth minute as Robertson was left free at the back post – his header hitting the side netting. The second was more successful, Liverpool worked the ball in the same pattern, only Alexander-Arnold’s decision to shoot saw the ball curl off the far post and into the net for the first goal.

Guardiola’s aims were not too dissimilar to his counterpart but were more disconnected on their approach. They were set up in a 2-4-2-2 shape, which had a variety of different movements which made them flexible between phases. Bernardo Silva dropped between the center-backs, which gave Man City a comparable look to how Hansi Flick’s Bayern were able to move the ball out of their defense, with a split between the double pivot. Kevin de Bruyne slalomed his way between channels, positioned behind the opposition midfield line. 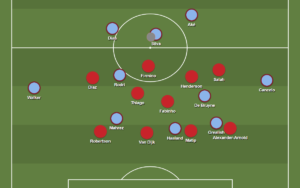 Man City’s 2-4-2-2 shape often moved into a 3-1-2-4 formation as Bernardo Silva dropped to receive between the center-backs and the wingers positioned themselves inside to keep Liverpool’s defensive line close.

With their ball-heavy players on one side, it’s no surprise that they had more connectivity on the left, which saw more rotation between De Bruyne and Grealish as a result. João Cancelo could offer the overlapping run, but City’s incredibly technical players are more geared to slowing the ball down and patrolling the halfspace, instead of hitting the wider areas with more aggression.

Man City moved the ball from fullback to inside forward, even if Liverpool’s 4-3-3 zonal press did have their double pivot deeper than perhaps Guardiola would feel comfortable with. Klopp accomplished this with the wide center-midfielder pushing beyond the forward line, almost as if he’s a free man, and onto the center-backs with the rest of the team staying compact in their shape. This is a common trend in their pressing scheme, but a detail that isn’t replicated amongst the European elite.

As a result, City’s passing play continued to run into similar problems, but their work on counterattacks was a little loose too. Of course, this is a very new circumstance for City. Not only is it early into the season but they have a tall, powerful striker to feed. 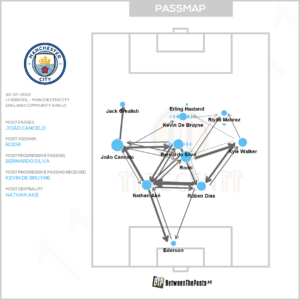 A rare Man City pass network where the forwards are disconnected and don’t have a large number of touches.

Haaland’s influence was pretty small up to this point, but the details were in his movements off the ball. On the transition, Haaland moved away from the ball to isolate the center-backs more, whilst also lurking on the blindside before hitting the box as fast as possible. The Norwegian had a big double opportunity just over the half-hour mark; one which had him completely off balance, whilst the other he should have bagged from a Silva cross. Outside this moment, shooting opportunities weren’t too often, but let it be known that City bought Haaland with the full intention of using him as a striker, it just needs to be wired together.

The game state didn’t change as the teams came out in the second half. City was able to break into one of their more favored passing patterns from time to time. This involved connecting to the player pinning the play out wide, before hooking the ball to an explosive runner in the halfspace.

However, Guardiola’s team still ran into similar first-half problems and unable to provide a solution to opening up the wide areas more. Off came Grealish and Mahrez, on came Phil Foden and Julián Álvarez. At the same moment, Firmino was replaced by Núñez.

Although Foden and Álvarez also moved central, both players offered more box threat and peeled around Haaland or further out wide. City’s forward line looked sharper, but it wasn’t without holes in the backline to still give Liverpool a dangerous threat. From an Adrián long ball, a dodgy Dias touch created the turnover and Henderson put Núñez through, but an important interaction from Ederson kept the score level.

After end-to-end attacks from both teams, City was able to bundle the ball into the net after some smart runs from the forwards. Álvarez and Foden made runs between the full-back and center-back, which put Haaland and De Bruyne in more space in front of the center-backs. Foden’s shot may have been saved, but the spill from the goalkeeper kept the ball in a dangerous zone as Álvarez squeezed the ball through a tight gap. Subject to VAR review, City were back in the game.

Klopp reinforced the right side for the final twenty minutes. Alexander-Arnold and Henderson were replaced by James Milner and Harvey Elliott as Liverpool switched the onus onto much more direct channel play.

This saw more ball-to-feet in the halfspace and putting Elliott behind Cancelo as the full-back sat higher up the field. Liverpool continuously aimed to put Nathan Aké in an uncomfortable position, by either playing Núñez behind him or Salah in front of him. On these occasions, Klopp’s team made good progress down their right side and the results would start to come through. 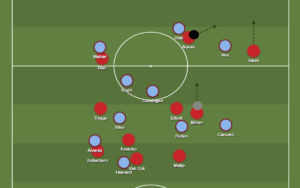 A direct ball from Milner to Núñez saw the striker play Salah in space out wide, with Cancelo out of the equation. Salah returned the favor by putting a dangerous ball towards the back post, but the raised arm from Dias denied Núñez from hitting the target. A penalty was awarded, and Salah executed from the spot.

Man City showed little sign of response, as Liverpool moved the ball more cleanly down their right side of the field, whilst also being able to offer counterattacking threat from breakdowns in City play. Liverpool excellently confirmed the result, as substitute Fabio Carvalho moved the ball to Salah, after Silva was dispossessed on the right. A cross found Robertson at the far post, whose header connected with the diving Núñez, who steered the ball in from close range.

Community shield games can be taken with a pinch of salt. Is this a pre-season game or something that should be taken more seriously? Whatever your views, Liverpool was both fresher and better in a game of similar objectives. Man City often aim to stretch the opponents’ last line, but both used inside forwards to create space out wide for the full-backs, one team was well ahead on this aspect than the other.

Both of these teams remain in a class of their own. Teething issues may arrive for Haaland, but with over one expected goal (on his own) against the league’s best defense, and from only three shots, City should probably be fine with their super striker.

Liverpool constructing their right side was the newest addition to a world-class attack last year, but this season it looks like they are going to be as aggressive as ever. The addition of a traditional number nine will provide yet another way their attack can bulldoze through teams. 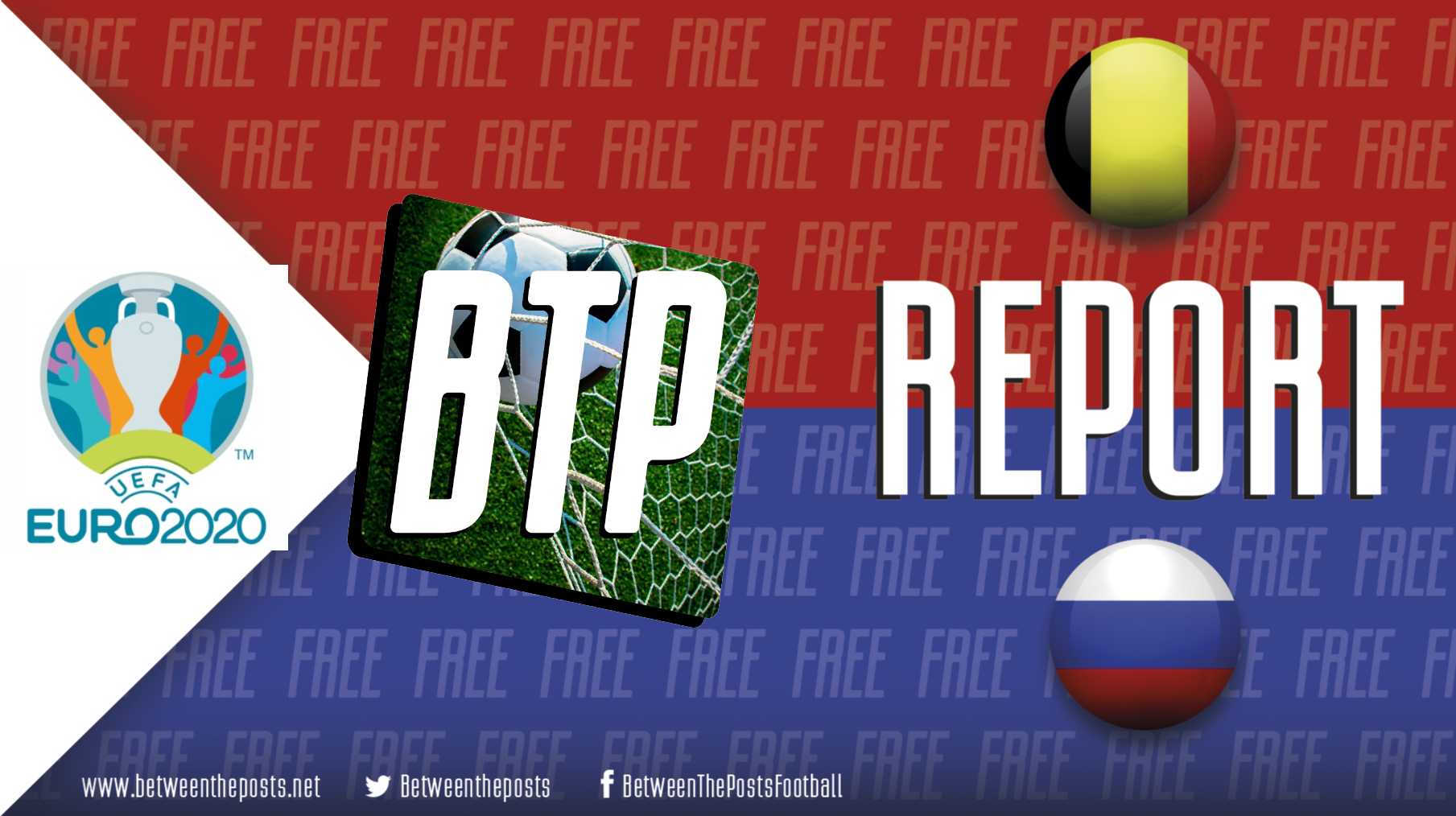