Los Angeles Galaxy looked like the better team in the first few minutes – until a red card gave them a handicap for the rest of the game. Seattle seemed to have decent plans, but failed in the execution. Ultimately, they were unable to take advantage of being a man up for almost the entire game.

The match between Los Angeles Galaxy and Seattle Sounders was a big one regarding the playoff race in the Western Conference. Los Angeles sits in third position, but with just one point ahead of Seattle and just four points above the cut.

Following the win against FC Dallas three days ago that finished a surprising three-game losing streak, manager Guillermo Schelotto made just one change. Julian Araujo was replaced by Uriel Antuna.

More changes were seen on the other side. Brian Schmetzer opted for a 4-2-3-1 formation instead of the 5-3-2 shape he had used in the match before. Six new players came with the new formation, with Kee Hee Kim playing alongside Xavier Arreaga as center-back. Nouhou Tolo was preferred over Joevin Jones, and Cristian Roldan and Gustav Svensson played in defensive midfield. In the offense, Jordan Morris and Harry Shipp were introduced to the starting lineup. 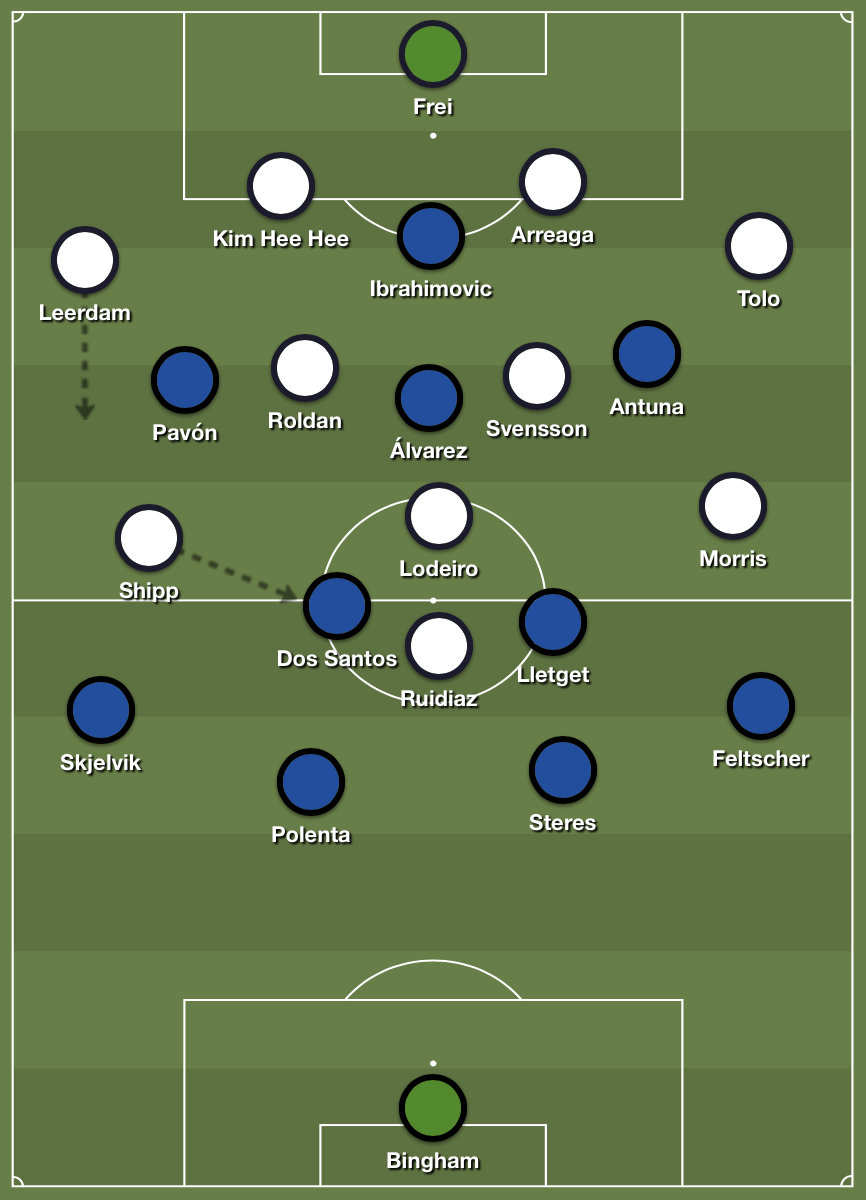 Both teams set up in a 4-2-3-1 formation. While Pavon and Antuna were looking for spaces inside, Seattle only had Shipp moving between the lines with Morris staying wide.

In the first few minutes, Los Angeles started with a good, variable possession phase. The fullbacks stayed deep in the buildup, with the wingers looking for space either in a high and wide position or between the lines more centrally.

LA Galaxy then looked to create triangles on the wings with the movement of Favio Álvarez or Jonathan dos Santos, who moved wide to support their teammates. The general idea in possession was to start the attack on one side, attract the opponents and shift the ball to the opposite side. However, after five minutes, the hosts lost the ball on the wing and Seattle played a deep ball behind Los Angeles’ center-back Daniel Steres. Because Diego Polenta was caught high up the field, Steres was the last man. Seattle’s striker Raul Ruidiaz was faster, which led to a red card offense.

Losing a center-back after a few minutes into the game is bad news for every team and often leads to a change by the manager. Guillermo Schelotto however decided to move Rolf Feltscher to the right center-back position with Antuna playing as a right back. His position was filled by Álvarez and Los Angeles set up in a 4-4-1 formation. After 33 minutes Schelotto subbed off Álvarez for center-back Giancarlo Gonzalez. Feltscher and Antuna moved back to their usual positions.

Impact of the red card

In the first few minutes after the red card, LA Galaxy looked unimpressed withhaving to play with one man less for the rest of the game. They still dominated possession and were able to advance the ball into the final third. The one-third of the pitch that is closest to the opposition’s goal. Zlatan Ibrahimovic played a very important role when it came to the host’s possession phases. He used his physical superiority to win aerial duels and knock balls to his teammates – mostly Cristian Pavón.

Los Angeles opted for a more direct style in the final third as well. They looked to create space on the wings to get time to cross the ball into the box, looking for target man. Ibrahimovic. To increase the possibility of a successful aerial duel, the Swedish striker moved to the second post, where the fullback was positioned. With this clever movement he escaped from the taller center-backs. However, Ibrahimovic was often the only player inside the box, allowing the center-backs to leave their positions and clear the ball. 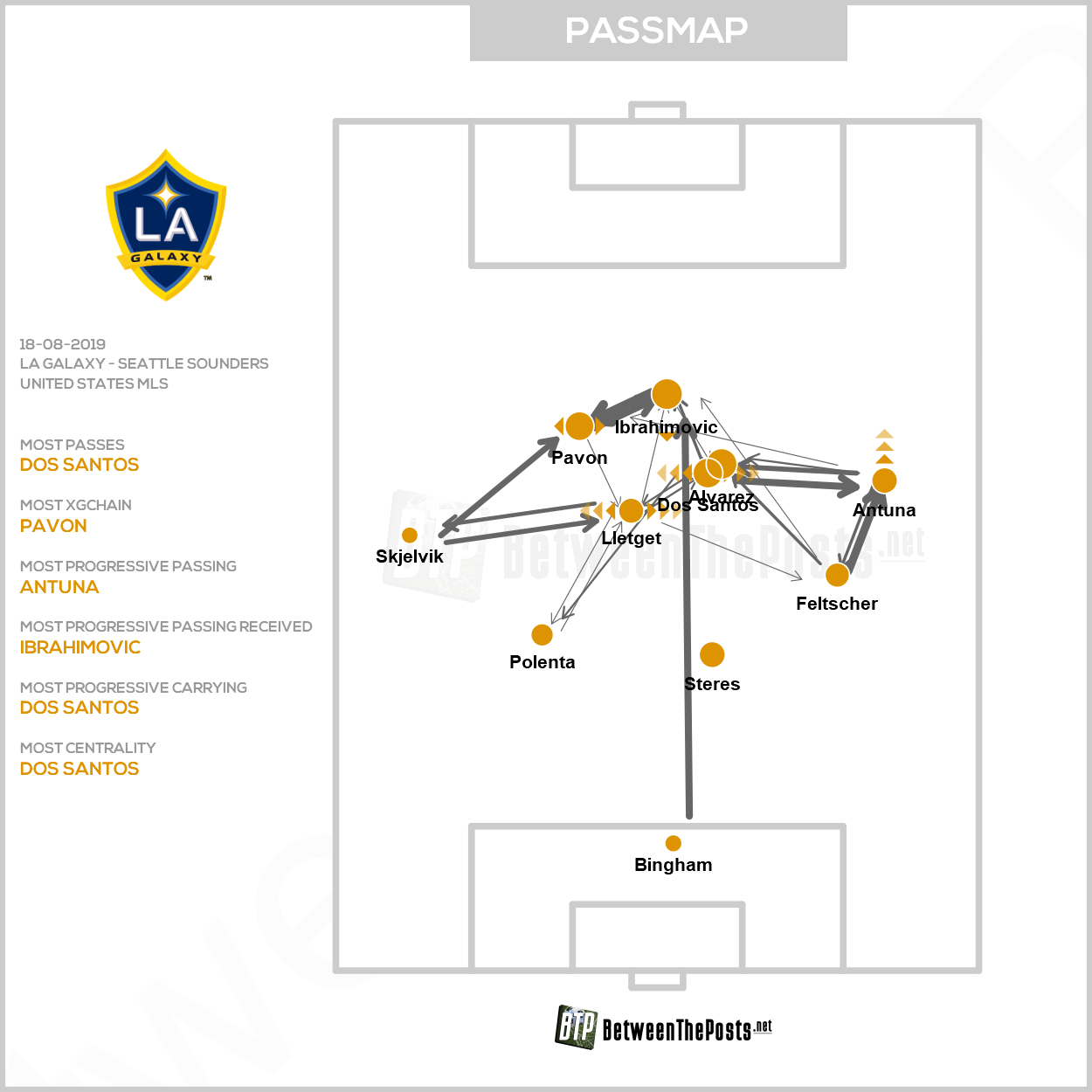 The fact that Seattle could not get a foot in the match in the first fifteen minutes was mainly down to their poor pressing. They set up in a 4-4-2 shape, trying to close the passing lanes into the center. After the ball was played to the wings, they shifted to that side and created man-to-man duels. However, their pressing was badly structured. The strikers were unable to close the passing lanes, the other players were too far away. To put pressure on the ball carrier, they pushed out of their positions, but were isolated and could therefore be passed easily.

Seattle takes part in the game

After fifteen minutes, the guests had their first sustained possession spells. Seattle looked to start the attack on their left side, where Tolo was in a deep position. Morris was positioned on the wing, Nicolas Lodeiro and Shipp tried to find space between the lines.

With Shipp playing as an inside forward, he opened the space on the right wing which Kelvin Leerdam used to push up. Like Los Angeles, Seattle wanted to attract the opponents on one side to then shift the play to the advancing fullback on the other side.

In the final third, Seattle tried to exploit the spaces on the wings. To open this space, they had the ball in the center and attracted the opponents. Their crosses were mainly played in low, because Ruidiaz is way smaller than LA’s center-backs and would be without a chance in an aerial duel. 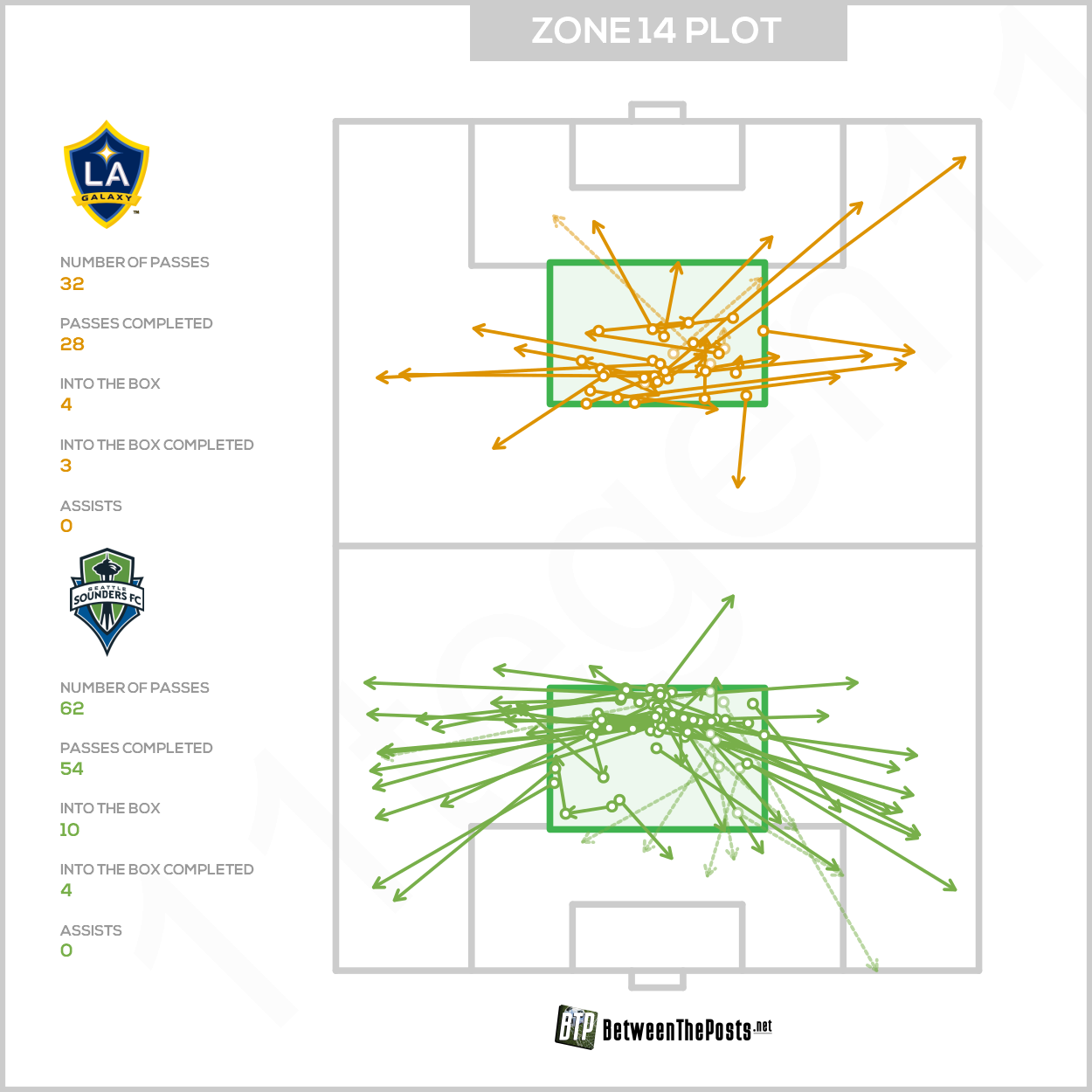 Seattle was unable to constantly put pressure on the hosts and play passes into the box, though. This was in part down to their own problems in possession, but it was also related to Ibrahimovic, again. His physical superiority against the center-backs allowed Los Angeles to get some rest from defending deep in their own half.

The biggest problem for Seattle was their poor positional play. The distances between the players were either too short or too long.

With too little spacing, passes failed to pose any threat for Los Angeles because they did not make significant progress on the pitch. The problems with too long distances were high risks of interceptions and receiving players finding themselvesisolated without any passing options.

This problem often came up when Seattle had the ball on their left side and could not switch the play, because the right halfspace If you divide the field in five vertical lanes, the halfspaces are the lanes that are not on the wing and not in the center. Because there is no touchline like on the wing, players have the freedom to go everywhere. But this zone often is not as well-defended as the very center. This makes it a very valuable offensive zone to play in and a lot of chances are created by passes or dribbles from the halfspace. was not occupied. However, when Seattle did manage to fill this halfspace it often resulted in promising attacks where Shipp could receive the ball and turn between the lines to play to Leerdam. 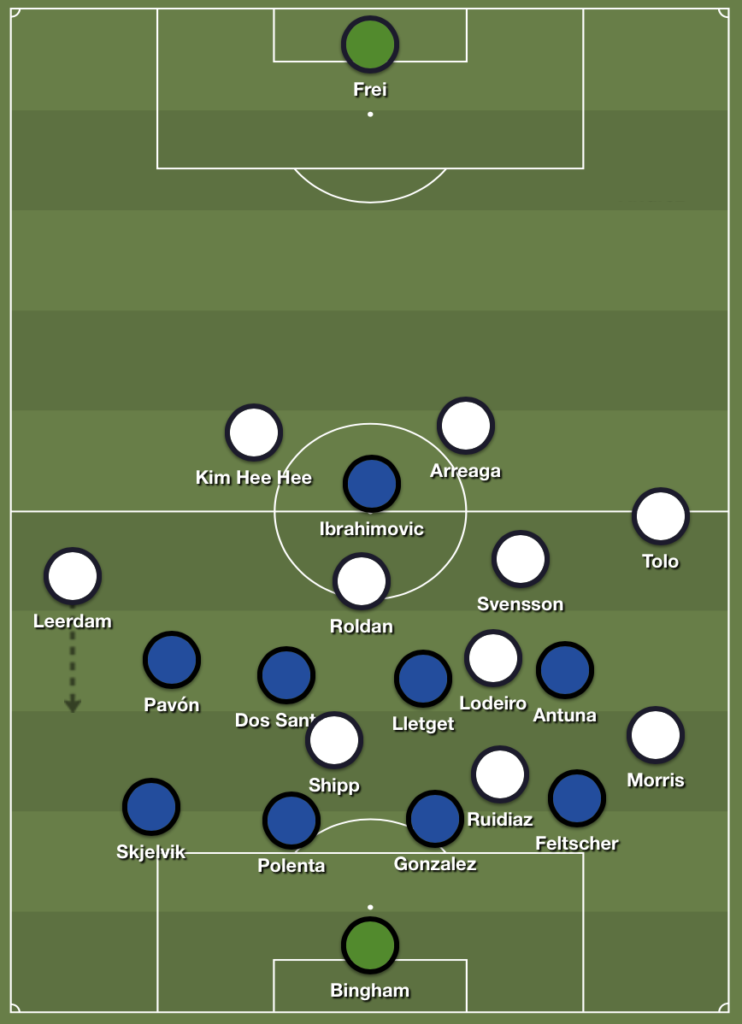 Seattle’s usual formation in possession. Roldan and Svensson tried to attract the midfielders to create space between the lines or shift the play through Shipp to the right side.

Seattle also had some smaller problems in their possession game, which prevented them from creating many chances. There were few runs into depth to create space between the lines and create problems for the back four. The passes also lacked speed and travelled too long, and the players took too many touches or played the ball into the wrong foot of their teammates.

Seattle’s changes deep into the second half

The first three goals of the game came out of nothing. Seattle was the dominant team between minutes 15 to 35, but scored the opener just before half-time after a counterattack. LA answered quickly with a cross to Ibrahimovic who headed the ball in to take the game even to half-time.

The hosts defended very deep from the start of the second half. This turned out to be a problem, because Seattle dominated the match completely based on a good counterpressing After losing possession, a team immediately moves towards the ball as a unit to regain possession, or at least slow down the pace of the counterattack. which gave Los Angeles almost no rest. However, the guests still had Ibrahimovic who was able to hold on to the ball. He was then eventually fouled in the box and converted the following penalty to give LA a surprising lead.

With around twenty minutes to go and trailing against ten men, Seattle coach Brian Schmetzer made some changes to his team’s possession structure. Handwalla Bwana came in as a right winger staying near the touchline, trying to beat his man with a dribble. Leerdam therefore positioned himself in the right halfspace, where he sprinkled in some runs to attract opponents and create space for Bwana. Jones was introduced as a new left back and against a tiring LA Galaxy team, Schmetzer also subbed in striker Luis Silva for Svensson.

Morris, Silva and Ruidiaz occupied the box, with Lodeiro and Roldan responsible to give the ball to wingers Bwana and Jones. Seattle created several dangerous situations, but converted none of them. However, a slapstick-style own goal by Jorgen Skjelvik, who was hit in the face by a failed clearance from goalkeeper David Bingham 25 metres in front of the goal, tied the game. 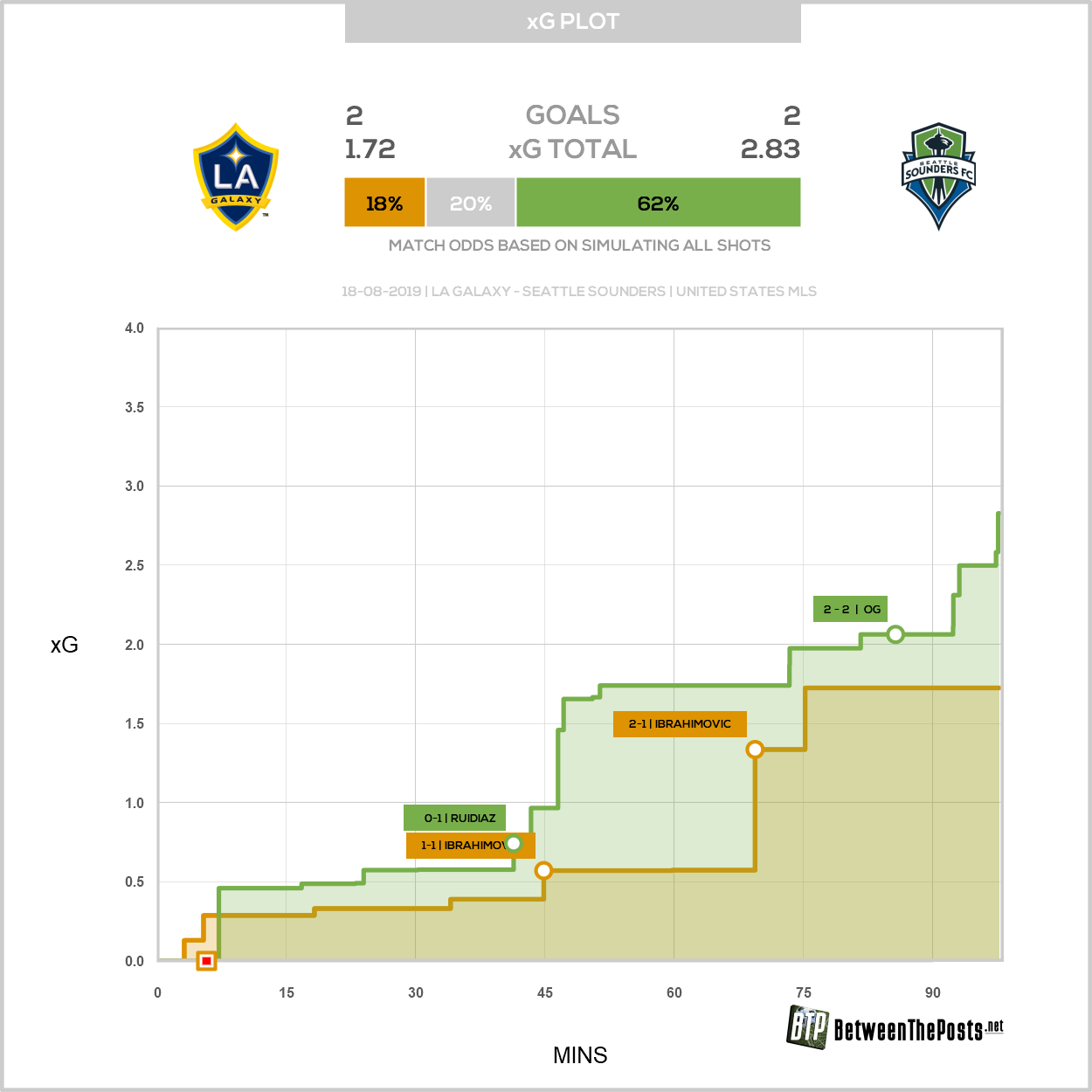 Both teams cannot be happy with the result. Seattle played with an extra man for almost the entire game, but were unable to constantly put pressure on Los Angeles until the final minutes.

For Los Angeles Galaxy, playing with ten men for an entire game and still getting a point is nothing to be ashamed of. However, were it not for the red card in the beginning and an own goal in the end, a win never seemed likely. The hosts were the better team until the red card and Seattle’s pressing looked poor. On the other side, Seattle’s main idea in possession was not bad, they just made too many mistakes in the execution.

Use the arrows to scroll through all available match plots. Click to enlarge.
Check our match plots page for plots from all other matches. 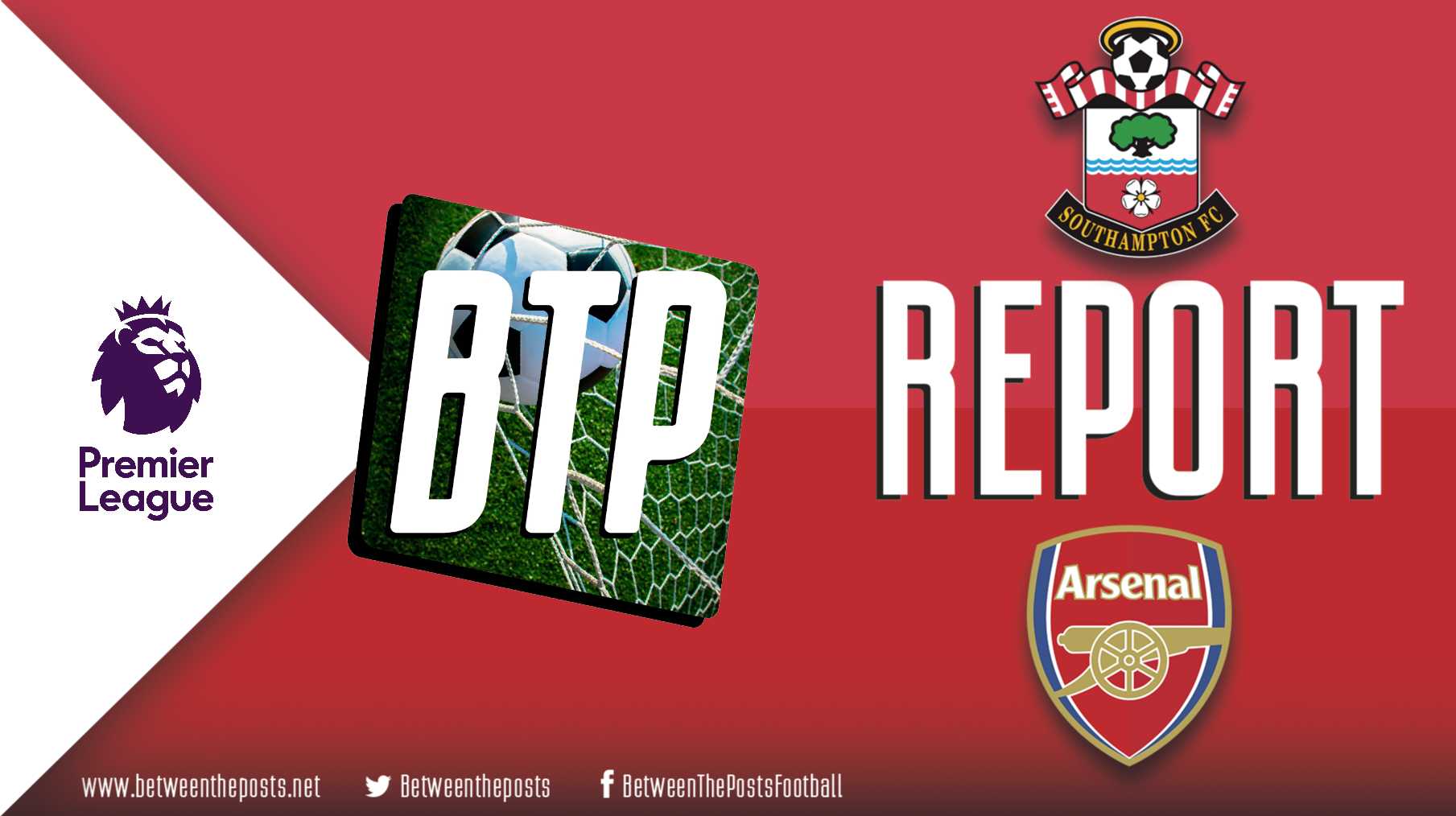