Another stride towards the title was against taken by Manchester City. Though Chelsea’s game plan in the defense was robust, their plan in the attack was more fragmented and their openness from their own long pass would be their downfall.

Clashes between the blues of Manchester and London have had both the highest of stakes, as well as become football’s benchmark in terms of quality.

The Champions of England and Europe locked horns, once again, to detour the trajectory of the title race. The City machine had steamrolled into a ten-point lead, whilst Chelsea’s stalling has seen some new solutions in the Carabao Cup. Tuchel’s 4-2-2-2/5-3-2 hybrid has given his stacked side more flexibility, and whether it would be implemented in the biggest game of the season was another weapon in his arsenal.

Meanwhile, City has always had such flexibility. In the reverse fixture, they fixed their pressing problems against Chelsea’s deeper circulation and Guardiola gained from Tuchel’s tinkers at the start of the second period. With a lead this far ahead, victory with such conviction should surely see sky blue ribbons once again.

Man City were missing Riyad Mahrez, due to AFCON, but had no other major omissions. Guardiola’s biggest selection came in the center-back positions, with John Stones preferred over Rúben Dias next to Aymeric Laporte. Raheem Sterling and Jack Grealish started on the wings, with Phil Foden in a false nine role.

Tuchel took a bigger gamble in the selection of his forwards. Mason Mount was left on the bench, with Hakim Ziyech and Christian Pulisic preferred behind Romelu Lukaku. Jorginho was replaced by N’Golo Kanté, whilst Thiago Silva and Marcos Alonso also returned to the team, from the side that beat Tottenham in the Carabao Cup.

The game states between Guardiola and Tuchel have altered and varied, but have genuinely followed the same pattern of City on the ball, Chelsea off it. This flowed in the same manner, but Chelsea’s organization off the ball made it difficult for City to settle in possession and ultimately led to City creating very few openings.

Chelsea set up in a 5-3-2 defensive shape when higher up the field. The switching between Hakim Ziyech and Christian Pulisic was crucial for Chelsea to maintain their central compactness, whilst applying pressure onto the City center-back. With the far sided forward dropping deeper, it enabled Chelsea to cover the vertical option for the hosts, whilst Mateo Kovačić, who was usually more central, occupied the movements of Phil Foden, who operated as a false nine. 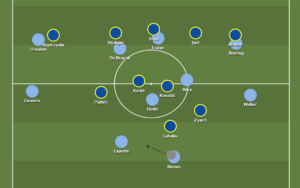 11th minute: Man City’s 2-3-2-3 shape versus Chelsea’s 5-3-2/5-4-1 shape, the width of City fullbacks was able to elevate pressure and enable them to retain possession, despite being unsettled in the first few phases.

Man City built out in a 2-3-2-3/2-3-3-2 shape. Joao Cancelo hugged the far left touchline but remained deep, whilst Kyle Walker was also wider, rather than the half-back role we associate with him. With City fullbacks wider and more accessible than Bernardo Silva and Kevin de Bruyne in the deeper halfspaces, it was easy for City to circulate the ball around the 2-3, but Chelsea’s block forced them deep and Guardiola’s team were noticeably more rigid in the first twenty minutes, whilst their opponents looked more comfortable.

Once the ball was over the halfway line, Chelsea dropped deeper into a 5-4-1 defensive block, perhaps the most effective Chelsea have been off the ball, under Tuchel, when facing Guardiola. This shape was flat but controlled the center of the field superbly, as City’s offensive midfielders were given little space when receiving in the halfspaces. Foden roamed the most out of the City attackers, but none of the opposition players took the bait. Though Foden was found a few times, with his movement opening passing lanes, turning and driving the ball at pace was not accessible.

As a result, City were forced around the outside of the Chelsea block, which saw a lot more success on the right than on the left. Grealish received a lot of passes on the outside of Cesar Azpilicueta, virtually on the touchline, and with no overlapping option, his influence in the attack was minimal. On the right, Raheem Sterling dribbles or runs against Marcos Alonso and Malang Sarr was a bigger mismatch. With Walker outside and the highly flexible Silva, more rotation was seen on this side of the field and progression out wide, could be met by a third man run by either attacker in the halfspace.

So City was reduced to just three shots within the first half-hour, but Chelsea didn’t register an attempt in the first period, as they were succumbed to effective counterpressure from City and were disconnected from the attackers.

Spearheading the 4-2-3-1 press, Foden had an easy time in encouraging Chelsea to move the ball outwards, whilst the opposition suffered from missing their usual profiles out wide. Antonio Rüdiger was on the right side, unable to move the ball out cleanly and was a lot more conservative when in possession, not driving the ball out between phases. On the left, Chelsea was a lot more fragmented, as Sarr was constantly pushed to pass towards the touchline and this is where the bulk of City turnovers was produced. 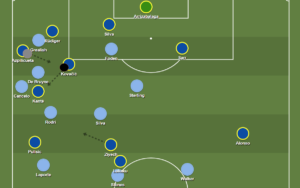 In early phases, Chelsea’s 4-2-2-2 hybrid shape came into the game, as Azpilicueta received deeper. With two dribblers in the midfield, Kovačić and Kanté were in space to set up transitions against City’s press, which was more geared to forcing them out wide. Despite this set-up working well at the start of the match, the attackers selected failed to properly combine in these phases and the execution of such counters was off the mark.

In previous encounters, Chelsea has banked on City’s fullbacks to step out far up the field within the press, to hit them with runners in behind. Not only was Silva more responsible for pressing Alonso, out of the middle, but Chelsea forwards did not translate well on the offensive transition. Ziyech requires high volume, whilst Pulisic had a couple of carries out of the right and into the center, but failed to connect with his fellow forwards.

Chelsea had clear and decisive game plans in their victories over Man City, but here such ideas were not indicated. As the first half continued, City made more and more progression up the field and it was no surprise that their best chance was created by one of their pressing moments. As Chelsea built slowly out of the back, City caged their left side in and Kovačić was forced into a sloppy sideways ball. Grealish was played in, but couldn’t find the back of the net.

Chelsea’s plan in possession seems to be to finding the wing-back on either side, who then tries to look for one of the three forwards and get a three-versus-three situation.

Hardly any spells of longer possession – 37% of the ball in total. #CFC #MCICHE pic.twitter.com/kbCP3ADIPE

With both defensive systems triumphing, one would be surprised that neither Guardiola nor Tuchel altered their attacks to try and gain the advantage. Man City didn’t commit many players in the opposition box, with the threat of Chelsea transitions imminent, yet could have brought on a more appropriate profile on the left.

As City was set higher up the field, more transitional attempts would have been ideal for Chelsea, yet Tuchel held the button, without deploying Mason Mount, Callum Hudson-Odoi or Timo Werner earlier in the game.

Chelsea was able to provide some offensive threat at the start of the second period, as Kovačić pounced on a loose Cancelo pass and met Lukaku with a well-timed run between the center-backs. Lukaku’s choice to try and bend the ball around Ederson was perhaps not the best, with the goalkeeper close to the edge of the box to meet it and Ziyech’s shot on the second phase failing to hit the target. Alonso would also have an attempt a few minutes later, created by a Pulisic carry into the center, but his shot was wild.

Nevertheless, the game didn’t change too dramatically going into the second period, which favored Man City. They controlled the ball, moving the ball around their usual circuit before their forwards would carry the ball towards the box. Whether they would win free-kicks or Chelsea would clear, Man City continued the pressure and signs of the Chelsea block cracking were evident in the hosts gaining more entries into the final third.

Chelsea had a more curious approach when it came to goal kicks, with a lot more long balls rather than short exchanges. Out of the back, Chelsea attempted long balls to evade pressure, but this led to counterproductive moments with their defensive shape falling apart in the process.

From a long ball out of the defense, Man City dispossessed Lukaku on the halfway line and Aymeric Laporte instantly found Phil Foden behind the midfield line. This led to Sterling receiving against Sarr, and his shot bouncing just wide of the far post. Two minutes after this attempt, Man City took the lead. 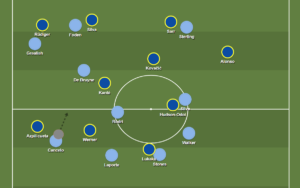 69th minute: Buildup to Man City goal. Chelsea’s defensive shape lost its structure as Cancelo was able to break lines to De Bruyne, who was already behind their midfield line.

As Kepa cleared out of the back, regarded as the ‘safe option’ by your average pundit, Chelsea lost their shape in the middle third and Cancelo’s line-breaking pass put Kevin de Bruyne behind Kanté. De Bruyne drove the ball towards the center and curled the ball inside of the far post, from outside of the penalty area.

Chelsea had brought on Werner and Hudson-Odoi by this point, and did finish the game with more of the ball, but created very little against an imperious City defensive block – once City breaks into this stage, nobody is usually capable of playing through. Yet another three points for Man City.

Though victory was necessary, it’s difficult to criticize too much of Chelsea’s performance here, especially in a defensive sense. Their defensive block was highly organized, and even when they went through shakier moments, City was still incapable of getting behind the defensive line. Nonetheless, Tuchel’s reasoning for picking Ziyech and Pulisic was because he wanted more runners (as well as fresher legs.) One can argue Mount could perform this well, whilst Werner and Hudson-Odoi could have been introduced a lot earlier.

The last time City lost points came to Crystal Palace, back at the end of October, and an incredible run of form indicates the marathon legs needed to keep up with Man City and their surge towards the title. Liverpool still has the trip to the Ethiad awaiting, but it’s Guardiola’s to lose.