In a thrilling climax, the next round of this heavyweight bout took place under a week after the stalemate at the Etihad. Tired legs and weary minds sought to galvanize themselves after tests in midweek, but the difference in energy quickly told. One outfit succeeded where the other had failed at this stage last year to still dream of an end to the season that no English club can rival.

These two teams had reunited only six days after a 2-2 draw in the Premier League. In a week where cup glory in Europe came closer to fruition, both outfits showed why they are the best on the circuit.

Manchester City profited from a single goal lead ahead of kickoff in their trip to Atlético Madrid for the return leg. Far from their imperious selves on the night, they were under the cosh to an extent foreign for an outfit that routinely dominates their matches. Yet, such a test is one these players have passed with flying colors in the past. Still loyal to the classic dogma of Pep Guardiola, the reigning champions continue to find new ways to battle to victory. One can say the same about their rivals.

Matters were far less tense at Anfield, where Liverpool coasted into the semi-final. Benfica bagged three goals on the night, but they could not truly unnerve the hosts. Moreover, Jürgen Klopp heavily rotated his lineup, making seven changes to the side that played last weekend: a marker of the depth at his disposal. A broader squad and a style of play no longer reliant on the high press have kept this collective fighting on multiple fronts. Would their energy finally produce a winner in this fixture?

Indeed, Klopp made another seven alterations ahead of kickoff here. Virgil van Dijk took back his rightful spot at the heart of the defense, sitting behind Fabinho, whose return, along with those of the pair of first choice fullbacks, restored the team’s spine to full strength. The latest iteration of the front three saw only Luis Díaz keep his spot in the side after midweek. Sadio Mané led the line in place of Diogo Jota, and the winter buy swapped flanks to make room for Mohamed Salah on the right wing.

The battle in Madrid had forced Pep’s hand. Kyle Walker and Kevin de Bruyne picked up knocks that rendered both doubtful before kickoff. The former did not feature in the squad, while the latter was a substitute. So, João Cancelo moved over to the right flank, and Oleksandr Zinchenko deputized at left back to the outside of Nathan Aké. Further afield, Jack Grealish featured in midfield for the first time since August, and Phil Foden’s duel with Felipe could not stop him from operating on the left flank.

This game flowed in the same vein the meeting of last week ended. Within four minutes, Cancelo caught out Liverpool’s high block, teeing up Grealish for the first big chance of the afternoon.

However, it was Liverpool that claimed the early initiative this time around. In the 9th minute, Andy Robertson hit an arcing cross from the set-piece to the edge of six yard box, where van Dijk lurked as the primary target. But it was his partner at the back that was decisive. Ibrahima Konaté bullied his way past Gabriel Jesus and towered over Aké to head home for a third goal in as many appearances.

City did not refrain from playing out from the back, although they were on the backfoot. Pep went for a familiar plan with the ball from their 4-2-3-1 offensive structure in the middle third of the pitch. Bernardo Silva and Fernandinho pendulated round Mané, both the fullbacks offered higher width to manipulate Liverpool’s wingers, and their wingers came into the halfspaces to load gaps between the lines. However, their work in possession failed to make much of a mark, falling foul of the high press.

Liverpool went back to basics. Their pressing traps at the Etihad relied on Jordan Henderson stepping out from midfield to press lateral passes along the backline to manage City’s left sided overloads. Here, Naby Keïta only shifted out from midfield to create pressing traps behind Salah while Mané swept across the front. The high line and eagerness to win second balls let Klopp’s men flourish. 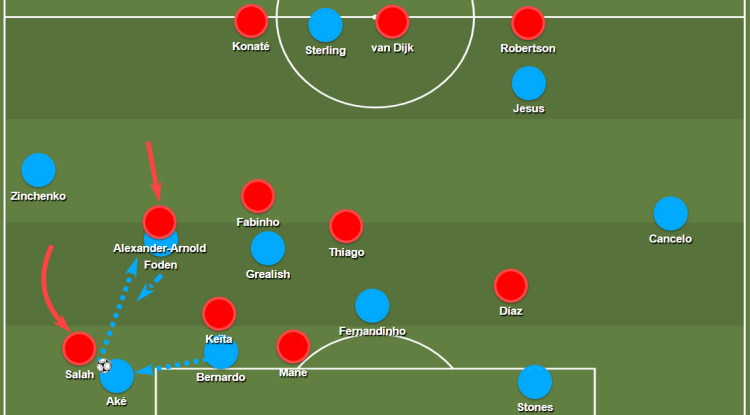 21st minute: pressing sequence from Liverpool. Mané closes down Bernardo and Salah shuts down the outward access to fullback Zinchenko. Aké forces the ball to Foden, caught in a tight central trap.

But City also paid the price for sloppiness on the ball. Even as they began to make headway into the final third, mainly with diagonal entries from the fullbacks into the forwards, hasty choices to force the issue rather than probe more calmly played into the hands of a compact medium block.

Endemic of this general malaise was the second goal of the match in the 17th minute. John Stones restarted the play, reluctant to move the ball forward. Zack Steffen then did not reset his footwork sharply enough, inviting Mané to challenge for the ball and force it into the net off of the goalkeeper.

City sought to equalize the score with their pressing scheme. They worked from a 4-4-2 block that Grealish and Sterling spearheaded. Bernardo often moved out to cover Fabinho, from whom he could shift further forward to bear down on Alisson, while Fernandinho secured the middle of the park.

Where Liverpool were ruthless in front of goal, City did not always generate shots from turnovers. Furthermore, their back four was prone to defending passively. Interchange from Mané and Díaz, along with the ball mastery of Thiago, allowed Klopp’s men to threaten through the center. In the absence of support for Fernandinho, they could breach the press. The third goal was a case in point.

From a throw-in, Alexander-Arnold played a one-two combination with Mané, finding room to hit a sweet half volley at Díaz. Stones blocked an ensuing effort from Robertson, but Liverpool continued to work the play. Thiago dinked a pass to Mané, who sent the ball spiraling into the corner. Doubling his tally on the afternoon, Mané had given his side a commanding lead on the stroke of half time.

45thminute: throw-in before the third goal. Fabinho drops off to create space for Keïta and Thiago to rotate, drawing out Bernardo. No one follows Mané, whose one-two combination triggers the switch.

If City were to have any hope of getting back into this contest, a quick goal was imperative. His men obliged. Cutting out a line breaking pass from Robertson, Fernandinho set away his compatriot Jesus down the right. The forward chopped inside Fabinho and put the ball on a plate for Grealish to score.

Pep had also adjusted the roles of the front four. Grealish moved out to the flank to operate as a left winger, and Foden played off Sterling, tending to drift to the left halfspace. The double width on this flank pinned Trent Alexander-Arnold, who faced more dribbling duels with the winger. Jesus mainly stayed inside the right halfspace, eventually taking the most advanced role in place of Sterling just after the hour mark. Unfortunately for City, imprecise ball circulation continued to hinder their attack.

As a final throw of the dice, Pep turned to the bench, making his only substitution of the match. Riyad Mahrez replaced Jesus, contributing decisively. He picked up a switch by Foden, beating Robertson before slipping the ball through the legs of Alisson. Bernardo scampered onto the rolling ball to offer a slender prospect of extra time. Alas, Liverpool were firm, booking a return to Wembley for the final.

Klopp waited until he got to the tunnel and then...#LFC 🔴 pic.twitter.com/WNOKaL9QZN

Though City clawed their way back into the game, their display was far short of the usual standard. Sluggish buildup and hesitation from the back four to jump out and engage in midfield set the tone for a costly performance in the first half. Pep’s men still have the Premier League and a first Champions League title to fight for, so this clash indicated his wariness of running the squad into the ground. But, in light of second half struggles in Madrid, City will be keen to get back to their best next time out.

Conversely, one should not detract from how well Liverpool performed. City’s exhaustion and injuries stacked the odds against them, but Klopp’s men needed to seize the window of opportunity. They did so with aplomb before the break. The FA Cup final presents the team with another golden chance to accrue more silverware, but attention must return to the league. To retain dreams of a quadruple at this stage of the campaign is a stunning feat and this outfit have the momentum to take it down to the wire. 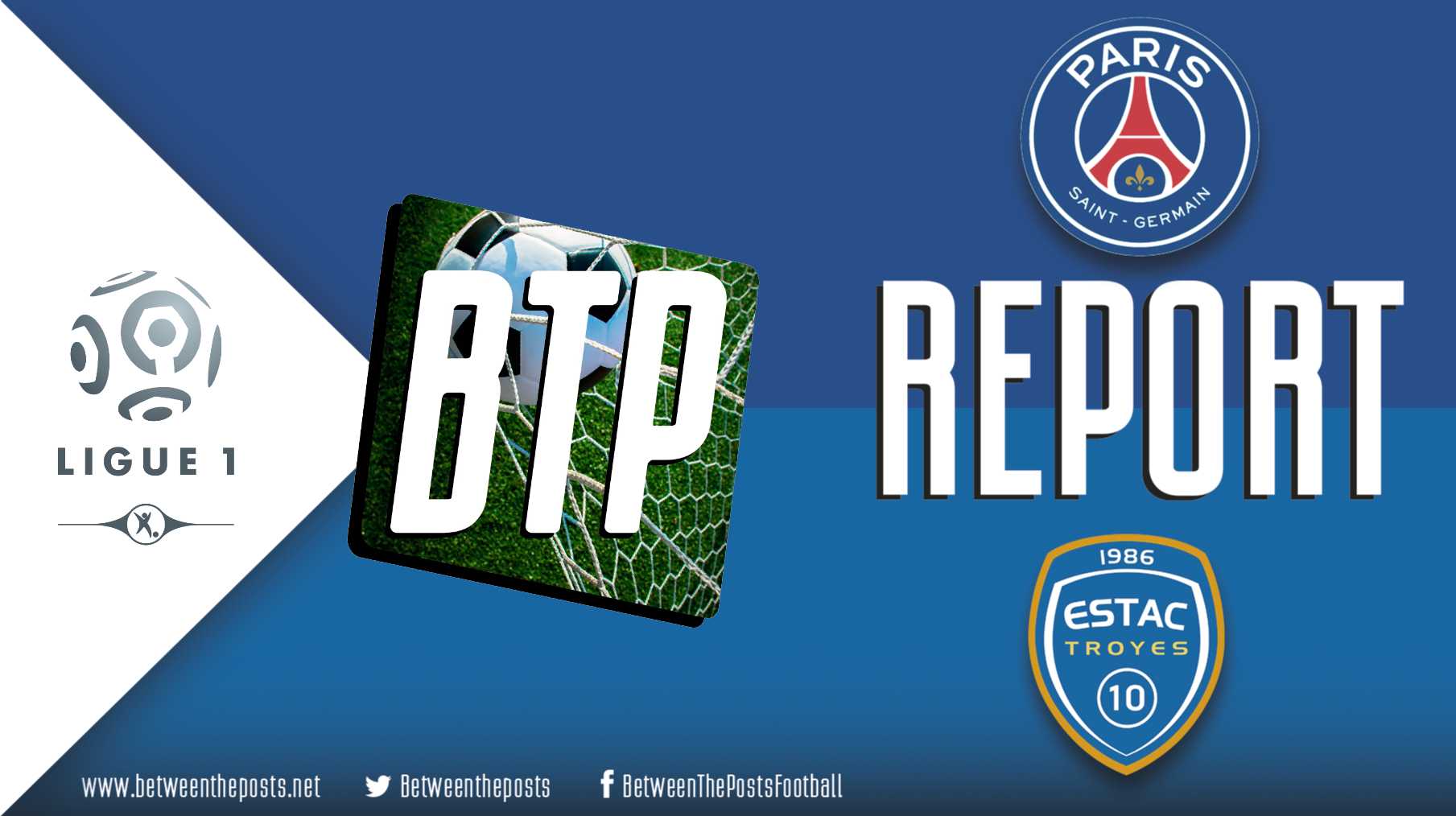