Manchester City have been the outfit to beat— all in the absence of a designated striker. But if the league leaders were on the hunt for a classic marksman, the point man of the away team delivered as good of an audition as one could imagine. City monopolized ball and space, but a man at the forefront of a summer saga was decisive on the scoreboard in more ways than one.

The defending champions have taken hegemonic control of the title race once more. Since the turn of November, City have embarked on a tyrannical run of form in which they have only dropped points in one of their last 15 Premier League games. Supreme as they are, it is a fitting run for an outfit bidding for their fourth championship in five seasons: Pep Guardiola is setting new heights on English shores.

Dismay is only ever at the corner for Spurs, whose mandate of Antonio Conte might be the latest in a string of false dawns. A figure of authority that has mastered the art of a short-term turnaround, elite standards soon dragged his men into reach of the top four. Nevertheless, comedic errors show how the history of club and manager are yet to align— and he will not put up with that fate for much longer.

Pep’s men have not relented in Europe too. Traveling to Lisbon in midweek, they put Sporting CP to the sword and the Round of 16 tie to bed, bagging five goals in the space of just under an hour. So, the City manager refrained from making too many alterations to the starting eleven. Kyle Walker, serving a two match Champions League suspension, replaced John Stones as the right back. Raheem Sterling featured on that flank in place of Riyad Mahrez, whose place in the lineup went to Ilkay Gündogan.

On the other hand, Conte was keen to muster a spirited display from his reproach of the 2-0 loss at home to Wolves last time out. The primary task that faced the Spurs manager was to manage the menace of the hosts: four new men came into the fold. Among those, Matt Doherty came out for Emerson Royal, Eric Dier returned to sit at the heart of the back five, and Pierre-Emile Højbjerg joined winter signing Rodrigo Betancur in the middle of the park, stepping in for Harry Winks.

Conte knew that his men would suffer, conceding space and control of the ball to the home team. So, if Spurs were to have any chance of taking away points from the Etihad, they needed to strike fast and hard in their rare spells on the ball. In the face of a 4-2-3-1 pressing scheme, he plotted appropriately.

A double pivot helped Spurs beat the first line of the press. If Cristian Romero sought to find Betancur and de Bruyne marked him, Højbjerg could double up on the number ten, offering a diagonal option. If Sterling narrowed to deny this lane, they could find Davies with a switch to make headway. Chelsea manager Thomas Tuchel created such a dynamic in the FA Cup, and the parallels did not finish here.

Once the play came to the left wing, where Spurs mainly progressed the ball, Heung Min-Son and Harry Kane came to life. While City retreated, the high positioning of Ryan Sessegnon, relative to Emerson on the right, prompted Walker to engage. Son would dart to exploit the room to the outside of Rúben Dias, taking the attention of Rodri, while Kane waited for the right moment to offer a link.

Notably, Kane’s role for England in EURO 2021 centered on finding the right moment to intervene in deep areas— a trait that has matured in recent years. The mix of this developing strength, and Conte’s love for third man combinations off the front, came together faster than even the Italian could have wished. In the 4th minute, the striker laced a through ball to Son, luring Ederson from his goal. He squared the ball to Dejan Kulusevski, slotting between the legs of João Cancelo to put Spurs ahead.

Conte could have picked the 5-3-2 system that terrorized Liverpool at the end of 2021. In the end, he went for a 5-2-3 shape. That was the same bulwark that City had broken with such ease on Tuesday: a straightforward first leg victory had given the side a framework to try and react to a startling setback.

Pep’s men adopted a conventional 4-3-3 structure. Breadth came from the wingers on both sides of the field while neither fullback moved inward to the halfspaces. The trick to their work on the ball lay in an existing asymmetry between the midfielders. Gündogan, whose role in the pivot already left him deeper than de Bruyne, dropped back to distribute passes from time to time. With Aymeric Laporte’s more aggressive role on the ball, this wide, asymmetrical shape tended to make headway on the left. 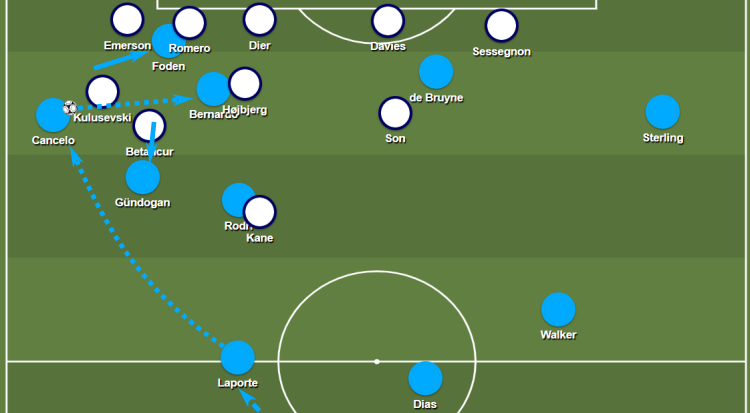 3rd minute: offensive sequence from City. Laporte plays the ball wide to Cancelo, who cuts onto his stronger right foot from the left flank. Foden runs inward, pinning Emerson to help his team find more depth in the attack, while Gündogan rolls out from the halfspace pocket so that Bernardo can receive. City offset the oncoming turnover thanks to the counterpressing net their leftward overload generates.

However, Conte’s men were a different proposition. Their deep block featured deeper wingers than Sporting, presenting a 5-4-1 system. Kane neatly screened Rodri, no longer connecting to Cancelo as in midweek. Betancur moved out to engage Laporte while Kulusevski and the back five diligently covered him, wary of the left back daggering passes in behind. It would take time to pick this lock.

Nearing 20 minutes, Sterling and Foden swapped flanks, while Cancelo’s creativity in the final third gained prominence as the half went on. But it was Spurs that collapsed in on themselves to level up the scoreline. A slippage from Hugo Lloris teed up Gündogan from six yards, and the captain obliged. Much like the campaign, it seemed as if City would eventually strangle the life out of this contest.

But never take your eye off Kane. On the hour mark, he took center stage. Switching the play to drag his team up the field, he popped up in the box, caressing a shot into the roof of the net. A miscued one-on-one with Ederson and an offside goal nearly put the contest to bed. So, Pep kept on adapting.

In light of his stellar season, Bernardo was on the edges of the clash much more this time around. Therefore, in the 67th minute, he made his first substitution. Mahrez entered the fray as the right winger, rotating with Walker to pry open Spurs with the more active employment of said flank near the box. Foden moved into the central role in the front three, and Bernardo then operated on his natural side as the left winger. The visitors held on manfully, desperate to claim all three points.

Yet, Pep’s men prevailed, winning a penalty thanks to a handball from Romero on the brink of injury time. Mahrez duly converted, setting up a grandstand finish. However, it would be Kane that had the final say. Catching the defenders asleep at the far post, he rose highest to steer home a headed effort from Kulusevski’s delivery. Spurs’ curse had struck once more, and its implications might be massive.

Could this result have blown open the Premier League title race? The end of City’s 15 game unbeaten run, along with the stubborn form of Liverpool, has now cut their lead of the league champions at the summit to a mere six points— having played one extra match. As is often the case if City lose, their performance was still dominant, but the free rein they handed to Spurs’ key man was fatal in the end.

In a week where murmurs of discontent have pursued Conte, he could not have dreamt of a better result. In a similar vein to the clash with Liverpool, the brilliance of Spurs’ display was twofold. Not only did their low, compact block give City a hard time in the final third, but their efforts on the ball imposed a goal threat. Above all, Kane showed the creative and predatory instincts that made him an enticing target for Manchester City in the summer: no better way to make them rue their reluctance.