Wolves showed up at the Etihad stadium with similar intentions to the ones that earned them a point at Molineux earlier this season. Even though Nuno Espírito Santo’s side has been a big threat to the Premier League’s top teams, this time around, City won easily. Wolves’ ten men were forced into a job of limiting the damage as City’s relentless control gnawed away at them.

Compared to the side that put a record-breaking nine goals past Burton Albion last week, Guardiola made seven changes. The only players to keep their places were Kyle Walker, David Silva, Gabriel Jesus – who netted four and assisted one in that match – and Leroy Sané. The fact Guardiola still had Kevin De Bruyne and Sergio Agüero there waiting on his bench just re-illustrates City’s mesmerizing strength in depth this season.

Wolves’ last game was their FA Cup victory versus Liverpool. That eleven was quite strong already, as you might have expected, so Nuno only made two changes. Rui Patrício returned to his starting place in goal and Matt Doherty was brought back in as Jonny Otto returned to the left, leaving Rúben Vinagre out of the side. 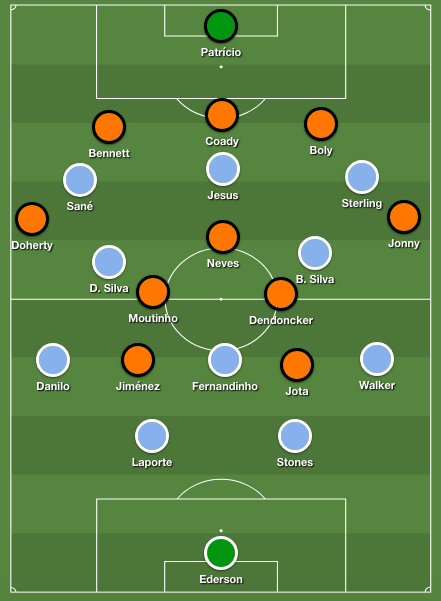 City focus on the left

From the beginning it was clear that Pep Guardiola wanted his side to focus on attacking down the left. The key role player in this was Danilo. More often than not, the Brazilian would step inside, next to Fernandinho to create a midfield pairing. This has been one of the main ways Guardiola wants Manchester City to operate when attacking. One fullback becomes a midfielder, the other a central defender and thus a very sturdy yet flexible 3-2-5 shape is formed.

Since João Moutinho, one of the wider central midfielders for Wolves, was obligated to step up and be aggressive, he was largely held back by Danilo’s movements inside.

As for Wolves’ shape in general terms, their 5-3-2 was aggressive in wide areas but particularly passive elsewhere, be it on purpose or otherwise. In particular, the strike pairing of Raúl Jiménez and Diogo Jota did not try to do too much in the way of hassling or blocking off Fernandinho. The more likely idea with them was to press the midfielder from behind, to then suffocate the space with the midfield then pushing up onto him. Additionally, they would likely have been used to stop such easy access across to the other side. 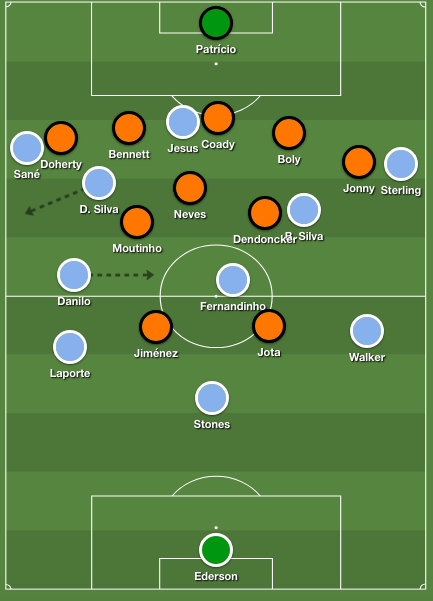 The movements of the City players to create access into David Silva.

Still, in this shape – unlike back in August, when Wolves played in a very compact 5-4-1 organization – Wolves could not quite contain the flow into David Silva. As Sané pinned back Doherty and Danilo held his position inside, he would peel off to the side and receive out on the flank, before driving inside with the ball.

To the away side’s credit, they remained compact and suffocated all of the spaces ahead in the center. In which case, the Spaniard would either combine again with the players on the near side or look to work it across to the right. Fernandinho would often step up into quite a high position, enabling a connection across to Bernardo Silva.

The good resistance from the visitors did not last long, though. Merely eleven minutes in, Danilo and David Silva’s movements inside towards the ball sliced open the channel between Ryan Bennett and Doherty just enough for Sané to seize an opportunity to get in behind his opponent. Like a flash, the German accelerated past the wing-back as Aymeric Laporte played a driving through ball, which was as perfectly weighted as the one Sané then cut across to Jesus for the opening goal of the match. Incisive attacking play, and the sort of attack that would not have been viable had it been Danilo in that position (as a usual fullback would be) instead of Laporte.

Wolves were quick to form a response. They worked the overload When one team has more players in a certain area or zone than the other team. they had against City’s back-four scrappily, before eventually finding the on-charging run of Doherty but his cross left a lot to be desired. An incidental attack which was not followed up by more substantial offensive moments. 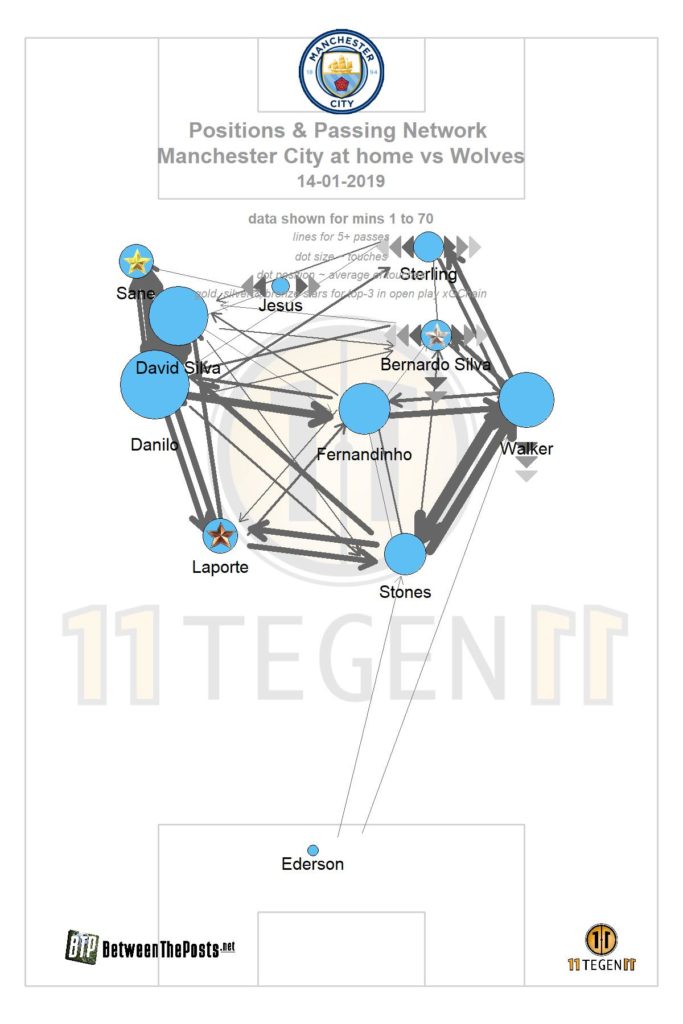 Wolves go a man down and pay the price

Matters were made much worse for the away side just in the nineteenth minute when Willy Boly was dismissed for a dangerous challenge on Bernardo Silva. As a result, Nuno was left to field a 5-3-1, that seemed to be playing to limit the damages now more than anything else. Leander Dendoncker and Jota stepped back a place to restore a solid defensive shape; Jiménez was still positioned to the right, where most of City’s attacks were still happening.

Wolves had not shown much inspiration in their attacks or counterattacks but they did manufacture one dangerous opening later on in the half. Jiménez twice won the physical contest between him and Laporte, following a hopeful lob up the field by Coady. As he pushed on against the last line, the overlapping run from the wing-back on the left this time created the dangerous overload. However, Jonny seemed to be caught in two minds as his end ball was somewhere in the middle between a cross and a shot.

City were ruthless in their control of this match. They were fully aware of how dangerous a one, or even two, goal lead could be if they were not switched on. So they continued to push on, rotating all the time to create that extra few inches of space for a teammate. Eventually, Raheem Sterling even came across to the left side to instigate some linkup play.

It became a theme that the give-and-goes on the wings caused the Wolves’ defense a lot of issues. That was no different when Sterling played it short to David Silva, whose return pass saw the winger whiz past Bennett before being shoved down to the ground. The home side were awarded a penalty, and Jesus made no mistake converting. 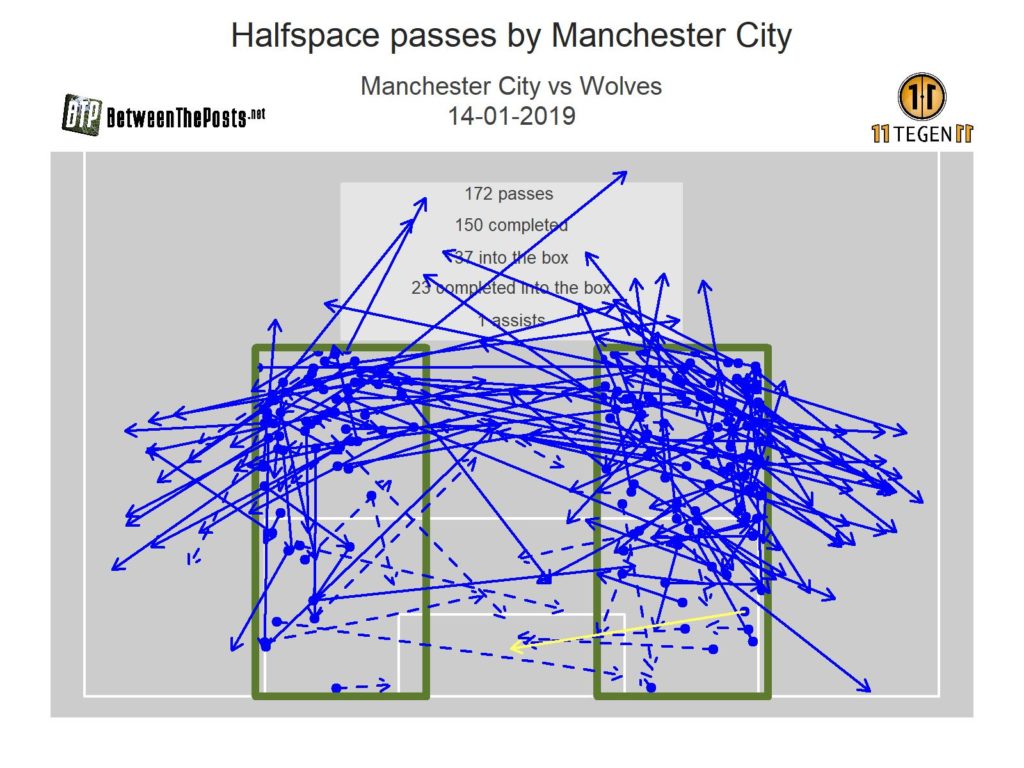 City see out a dull second half

Two up at the break, the game was essentially done. Nuno brought on Adama Traoré for Jiménez – a smart move, since the lightning-quick winger could offer some drive and more of an outlet with and without the ball. His press-resistance was impressive and he brought Wolves up the field on a few occasions. There is only so much you can do as an isolated attacker against three or four defenders, however, but his performance served as a positive takeaway for Wolves in this match.

Other than that, there were very little talking points. Nuno’s final substitutions aimed to limit the damages even more by taking off a couple more key players and replacing them with more defensive options. Then, towards the end, substitute De Bruyne’s angled cross from the left deflected in off a Wolves defender to really wrap things up.

What seemed like being a close affair ended up being a stroll for Guardiola’s City, as they move back to four points off top spot. They have had the perfect start to the year – beating title rivals Liverpool, advancing past Rotherham United with a 7-0 win before topping that by hitting Burton for nine and now keeping a third consecutive clean sheet.

On Wolves’ end, games at the Etihad can mostly be viewed as a write-off in any team’s season. Just three points off seventh-placed Watford and a place in the fourth round of the FA Cup already booked, Wolves fans do not have any reason to be put off by this result. 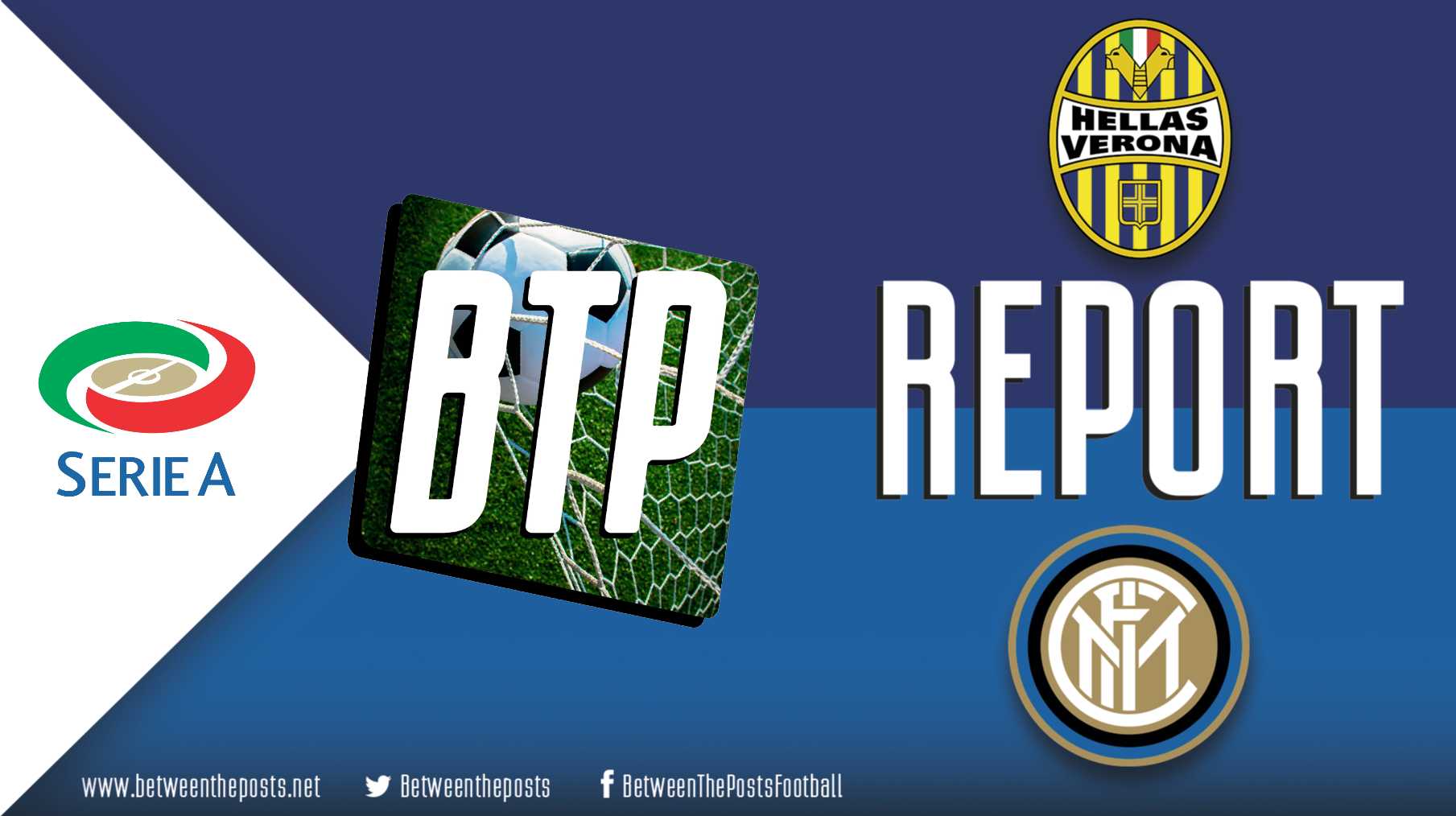