A clash that ought to have taken top billing at the end of the campaign revealed why neither club fulfilled expectations. Where one outfit could not turn their dominance into hegemony, the other was too frail in all aspects of the game to be their equal anywhere but on the scoreline.

The reverse fixture at Stamford Bridge at the end of November marked a time of great promise for these two outfits. Five months later, both of their campaigns now draw toward bitter conclusions.

Six points adrift of Arsenal, to whom they lost 3-1 last time out, Manchester United took a decisive blow to their hopes of entry into the top four. Ralf Rangnick arrived at Old Trafford as a figure of heritage befitting the dynasty at the club, but his brief tenure has prompted plans for renewal. Erik ten Hag will be the man in charge of drastic “open-heart surgery” from the summer, but until then, the Mancunians will seek to round out the season with whatever pride they have left still in check.

Before that 1-1 draw near the end of 2021, Chelsea sat at the top of the table, harboring hope of a first Premier League title in five years. Before kickoff, a 15 point gap now separates them from the league leaders Manchester City, whose form, and that of Liverpool, is a stern reminder of what it takes to be the best of the best. At their peak, this side can duke it out with anyone in Europe, but inconsistent spells at home and abroad have quelled the potential excitement of the last month of their campaign.

Rangnick was not fortunate enough to have many choices for this fixture. Luke Shaw, Harry Maguire, and Fred were among the men to miss out on another matchday squad with injuries. So, Alex Telles continued to fill in at left back to the outside of the pairing of Raphaël Varane and Victor Lindelöf. Ahead of them, Nemanja Matić and Scott McTominay formed the double pivot in a 4-2-3-1 system. Illness also ruled out Jadon Sancho, letting Marcus Rashford feature from the off as the left winger.

Tinkering throughout the new year, Chelsea manager Thomas Tuchel went for a 3-4-2-1 shape. As was the case for the visit of West Ham United last time out, the front three remained Mason Mount, Timo Werner, and Kai Havertz. In the absence of Mateo Kovačić, N’Golo Kanté and Jorginho sat in the middle of the park. Hence, Tuchel brought two men into the fold at the back. Reece James and Antonio Rüdiger replaced Ruben Loftus-Cheek and Trevoh Chalobah, both options from the bench.

Since the trip to Southampton, Tuchel has reconfigured the front three in his 3-4-3 structure. Mount has been filling the role of an attacking midfielder while Werner and Havertz have been split strikers from the last line, often exchanging lanes with the wing-backs on both flanks. But from the off, the German modified this structure. He moved back to deploying a pair of number tens in possession that operated from the halfspaces. The lone striker in this game was Werner, so Havertz drifted to the left. 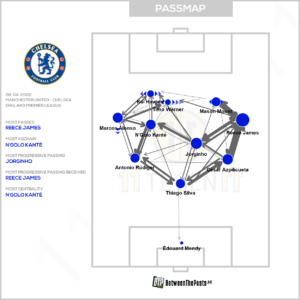 Dominating control of the ball, Chelsea threw off United’s scheme. McTominay moved out from the base of the midfield to cover Kanté and Fernandes shifted to the left to pick up Jorginho. If Mount made underlapping runs from the right, Matić then tracked his movement. Telles shifted out to close down James, and the central defenders refrained from ball-oriented shifting to keep an eye on Werner.

This dynamic was the root of many problems for United. The halfspace positioning and runs from Mount, along with the typically strong deliveries of James, wielded a dangerous axis from the right. In any case, Matić was between a rock and a hard place. If he tracked Mount, McTominay’s role opened up the center of the pitch for Havertz to exploit. If he stayed central and Telles was narrower to cover Mount, James could stride forward to threaten directly as a free man in the final third. Loading the back four with the front three and the pair of wing-backs, Chelsea asserted their superiority. 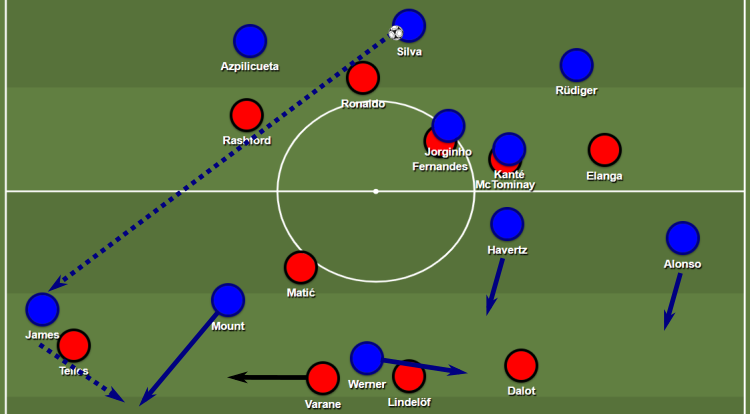 17th minute: offensive sequence from Chelsea. Thiago Silva has time and space to find James with a lofted diagonal switch of play. Since Azpilicueta dropped back a little, pulling out Rashford further, Telles must jump out from the back four to attack his opposite man. However, Mount, already free between the lines runs off the back of Matić. Varane and his teammate eventually shift outwards to offer cover, Werner moves to the right shoulder of Lindelöf, and Alonso arrives from deep to attack the far post, pinning Dalot. Havertz is the free man coming late into the box, but the cross eludes him.

Another typical pattern saw Mount and James load Telles 2-on-1 on the ball far side. The attacking midfielder pinned the left back inward with a deep run, helping Rüdiger to gain territory for Chelsea with a switch to the advanced wing-back near United’s last line. The guests exuded crushing control.

For all their hard work, Tuchel’s men were yet to break the deadlock. Havertz, a key contributor of goals in the last two months, was the man to receive the best chances before the break. However, his poise eluded him in the final third here. Racing into the box, he hit a strike into the midriff of David de Gea, then planted a header into the hands of the goalkeeper in the 36th minute, meeting his match.

Would Chelsea pay for their imprecision? United reacted at the start of the second half to mitigate the threat of the key man: James. Elanga swapped over to the left flank in place of Rashford, dropping to virtually form a back five in a deep block. Telles could now jump out from the last line to engage with Mount in the knowledge he had coverage on his outside. Therefore, César Azpilicueta became the free man on the ball, able to drive forwards from deep. The visitors finally found a solution after an hour.

53rd minute: defensive sequence from Manchester United. Kanté’s ball carrying engages the double pivot, opening the lane to Mount. Since Elanga drops off to cover James, Telles can close him down.

It was thanks to a familiar source of danger. Havertz, then Mount pinned Telles, and James drew Elanga deep. Azpilicueta dribbled to the edge of the box, forcing Elanga to come inward. The wing-back picked up the play on the right flank, whipping in a cross from just outside the penalty area. Havertz, the initial target of the delivery, could not beat Lindelöf in the air, but the ball dropped to Alonso. The wing-back beat de Gea, thrashing a sweet volley with his left boot goalbound. 1-0.

But their profligacy in the final third would soon cost them again. Kanté gave away the ball twice in a matter of moments, losing his bearing to put Matić on the front foot. The midfielder scooped a pass over the blue shirts to find Ronaldo. Empathically rifling an effort beyond Édouard Mendy, his 17th Premier League goal of the campaign drew Manchester United level within two minutes of the restart.

🗣 "Right now we very much rely on Cristiano."

Tuchel turned to his bench for more firepower, bringing on Christian Pulisic and Romelu Lukaku for Werner and Havertz. But James came closest to sealing a victory in the 80th minute. Mount teed up his compatriot with a backheel, but he slammed the post from a shot with his left footed strike. On the other hand, Rangnick sought to shore up the rearguard. Phil Jones replaced Matić, creating a back five with three central defenders. United fought till the final whistle, holding Chelsea to another stalemate.

Although they gained a point, United conformed to type. Facing, at their peak, one of the best outfits in Europe, their performance showed the disparity in tactical quality between them and the elite. They lack incision on the ball, while Rangnick has not been able to establish a level of compactness and aggression off the ball with which he is synonymous. The summer rebuild cannot begin any sooner.

This frustrating outcome was a familiar tale for Chelsea. Akin to many matches in the first half of the season, the team dropped points in a contest where they ought to have pulled away if they were more ruthless. Still 8 points ahead of fifth placed Spurs, it is tough to see them lose a spot in the top four. Nonetheless, Tuchel will hope his men are able to find form at the tail end of their league fixtures in preparation for their rematch with Liverpool at Wembley to avenge defeat in the Carabao Cup final. 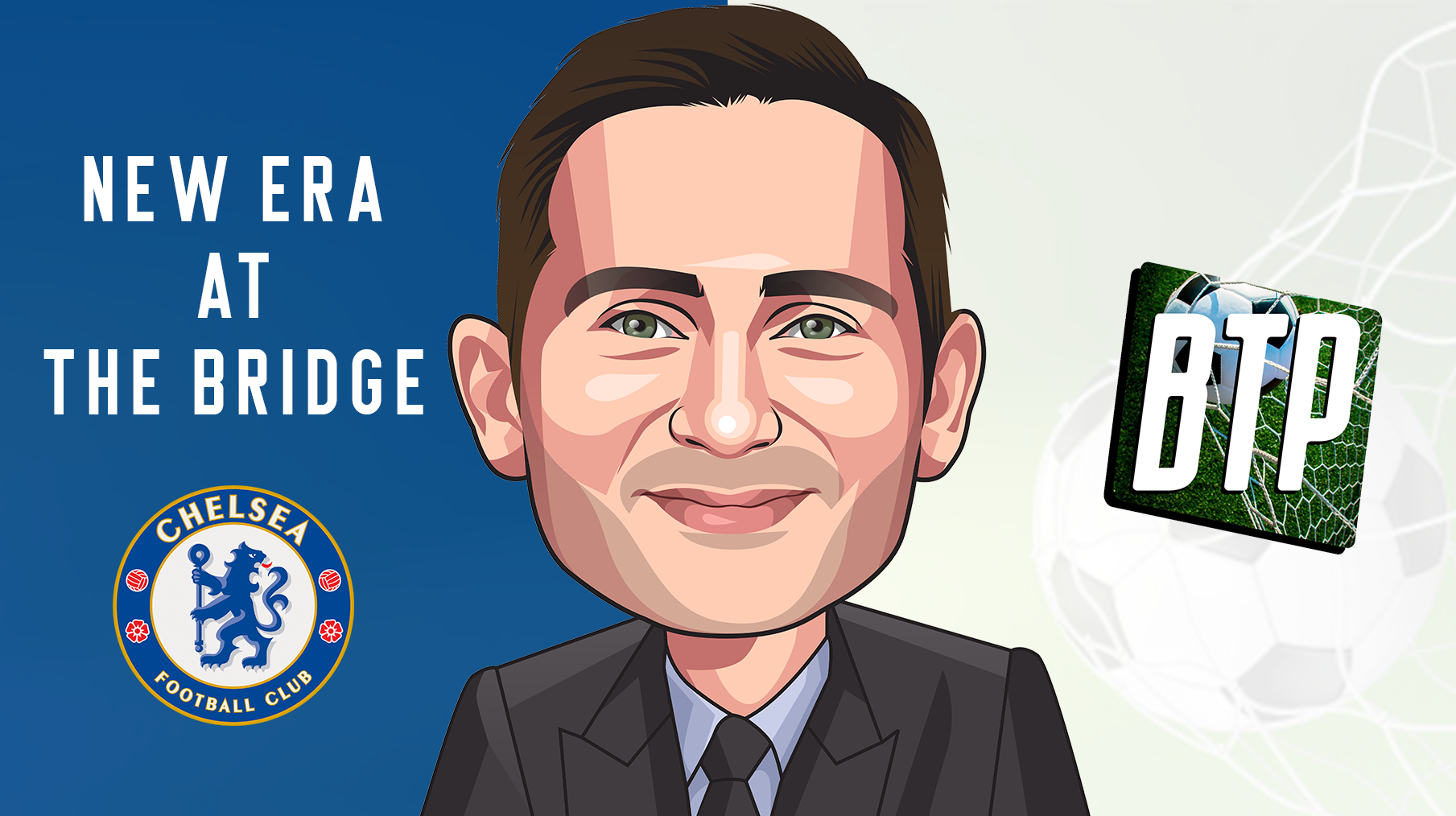 Chelsea, Frank Lampard, and maybe, the start of a new era