Manchester United – Newcastle United: United’s second half comeback paves over the cracks of another frustrating performance (3-2)

José Mourinho’s hand was forced throughout the match but his attacking substitutions eventually paid off. His final one, Alexis Sánchez, netted an all-important winner. However, it was a mixture of Newcastle’s defensive intensity and United’s senseless attacking play that put any kind of result for the home side under pressure.

United were winless on home turf since early August (!), when they gathered an opening day victory over Leicester City. So, to say the weight of pressure on Mourinho’s shoulders was growing would be an understatement.

That being said, he didn’t stray too far away from the side that drew 0-0 against Valencia during midweeks Champions League action. In came Scott McTominay for Marouane Fellaini, Anthony Martial for Alexis Sánchez and Ashley Young for Antonio Valencia. System-wise, nothing changed, as the players lined up in a 4-3-3 formation again. It seems like Mourinho’s experiment from last week’s loss against West Ham – playing with three center backs – is binned.

Rafa Benítez also made three changes from the side that lost 2-0 at home to Leicester last week. Joselu made way to give Yoshinori Muto his full Premier League debut whilst Kenedy replaced Christian Atsu and Ciaran Clark dropped to the bench for Federico Fernández. As always, Newcastle lined up in a 4-2-3-1 formation, which turns into 4-4-1-1 or 4-4-2 for most of the match. 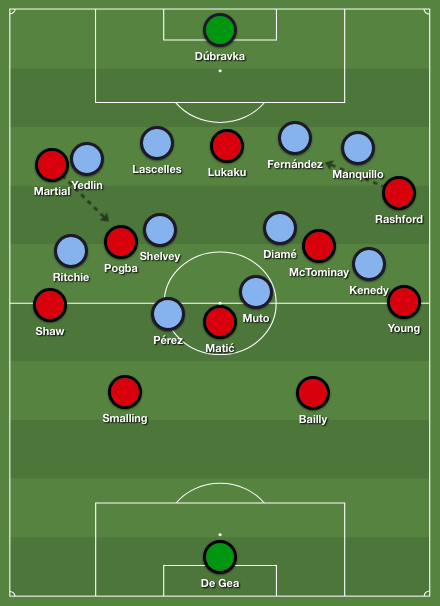 Newcastle’s strong intentions pay dividends early on…
The visitors had the bit between their teeth from the very start. There was a level of aggression and intensity to Newcastle’s midblock that never allowed United to fully settle in the opening phase of the match.

In this high-intensity 4-4-2, Newcastle’s full-backs and midfielders were tasked with pressing their opposite numbers. The attackers Muto and Ayoze Pérez were slightly less forceful as they sought out to press the ball-holding centre-back whilst cutting off the supply line into United’s number six, Nemanja Matić.

With the likes of Martial, Paul Pogba and McTominay all moving to the ball very frequently, United were able to create problems of their own. In doing this, they were limiting the space they could operate in.

…and gets them two goals from throw-ins (!)
Within the opening ten minutes, the away side had silenced the home fans by taking a two-goal lead. Disorganised marking from a throw-in afforded Pérez time and space to play Kenedy in down the channel, who coolly cut in and tucked his shot into the bottom-left corner. Then, for their second goal, unapplied pressure on a throw-in once again cost United as Shelvey was allowed to whip in a delightful ball. It landed at the feet of Muto, who held off his man, turned and finished just to the side of David De Gea to put Newcastle up 0-2.

The lack of pressure on Newcastle’s players was a huge problem for United in the first half. As was the case against Valencia, the spaces between teammates were too big. This meant that the away side could comfortably evade any kind of United pressure, be it from counterpressing or otherwise.

On one particular occasion during a transition, all United players except Martial and Romelu Lukaku had dropped back to create a single-line block. So, when the winger on the ball found access inside, Newcastle’s central midfielder Shelvey had twenty yards to receive in. 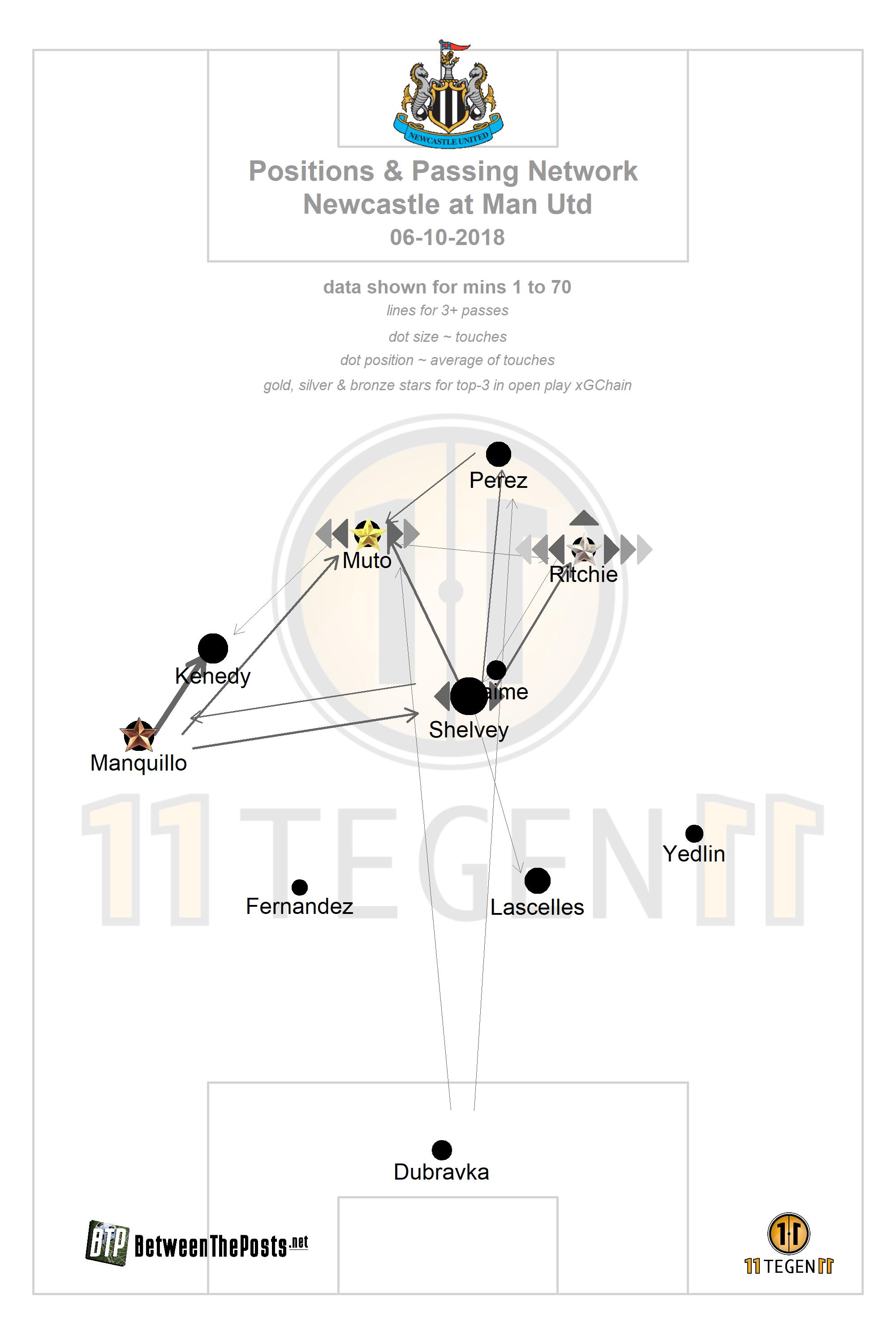 United’s change of shape fails to eradicate previous systemic issues
Barely ten minutes after Newcastle’s second goal did Mourinho opt to make a change. He replaced Eric Bailly with Juan Mata as McTominay dropped into the back-four. The shape had now slightly altered, too. Rather than a 4-3-3, Pogba sat deeper next to Matić to form something of a 4-4-2 with Mata coming in off the right and Rashford moving up front alongside Lukaku.

As for its effectiveness, it didn’t appear to be making a huge deal of difference. The key problems for Mourinho’s side before and after the change was their play in possession.

Too often, Manchester United were trying to play through the eye of a needle by playing delicate passes into the closed-off halfspaces from the flanks. They tried so mostly by playing through the left side of the pitch. Usually, one of Luke Shaw, Pogba or Martial would make the run inside to receive in this space. But with no follow-on support and Newcastle suffocating of that space between the lines, the turnover could be easily forced. In the first half, four of the seven turnovers against United came in that exact space just on the edge of the box.

What was arguably worse is that they never learned from their mistakes in trying so heavily to get in down this side. Against a 4-4-2 that would choose to sit tight and remain fairly zonal in their own third, it was important to try and stretch them, so that there is more space to play in both centrally and on the flanks.

Fortunately for Benítez’s side, United generally ignored doing this, as they have done during most of Mourinho’s spell as manager. There were not many times during the first half where Pogba or Matić pinged a diagonal over to Young – what did come of those few instances was of far greater danger than what came of their left-sided play. By overloading the left side and then switching to the underloaded side, Young was afforded more space to work a crossing angle back over to the more congested side.

United’s best chance of the half came from the right as well. Lukaku, who’d been continuously supporting play on each side, fizzed an inch-perfect cross onto the head of the Rashford, whose header was glanced just wide. The entire first half, Newcastle’s 0-2 lead never looked to be in trouble.

Mourinho’s attacking bombardment wares down a waning Newcastle defence
If United is trailing, gambling on Marouane Fellaini to get on the pitch is a safe bet. He is – and always has been – the manager’s predominant ‘Plan B’. His aerial threat is vastly superior to a lot of players and would help them in their continued plans to get crosses into the box. He came on at half-time, replacing McTominay, which meant Mourinho was going particularly gung-ho with this match.

The change meant Matić dropped alongside Smalling when United were out of possession. In possession, the Serbian and, occasionally, Pogba sat in the same line as the centre-half, looking to provide better ways of carrying out the ball from the back.

When play reached the next part of the pitch, Pogba was given license to roam further ahead. As were Mata and Alexis Sánchez, who had come on in place of Rashford just prior to United’s first goal. Pogba and Mata especially were key in providing links into the both sides, not just the one. United were beginning to combine better in tight spaces and were drawing out the Newcastle midfield – although, this time, the visitors can take the blame for not choosing to be more compact by sitting off their opponents. Resultantly, more spaces in the box were being opened up for the now isolated centre-backs against Lukaku and Fellaini.

One particular spell of pressure saw a mix of close combinations down the left side as well as good movements on the weak side, to enable Pogba to clip it into the space just on the edge of the box. From there, Lukaku laid it off for Fellaini as he struck a menacing shot towards the corner but it was crucially stopped by Newcastle’s goalkeeper Martin Dúbravka to keep it at 0-2.

In fact, up until the 70th minute, the only let down from a Newcastle standpoint was their sloppiness on counters. The tempo of the match changed due to a beautifully struck Mata free kick that put United on 1-2.

Despite the sustained pressure and growing breakthroughs from United, Newcastle defended incredibly well against the countless crosses they were faced with. If it wasn’t a clearance from a full-back, it was a header from Jamaal Lascelles or an amazing save from Dúbravka.

The equalizer did not come from a cross, but from some brilliant French combination play. Martial combined with Pogba to work the space for a drilled effort into the near post for 2-2. In the dying seconds of the match, Sánchez – of all the possible aerial targets – was the one to claim the header that completed United’s remarkable, late comeback.

Takeaways
It’s another deeply disappointing result for Rafa Benítez’s Newcastle, as their torrid start to the season continues. No shame can be taken from this defeat, though. Going to Old Trafford and performing in the way they did was an impressive feat. Much like in some of their other big clashes this season, it’s been a matter of hard luck that has seen them come out the wrong side on the scoresheet.

The result might well have edged back Mourinho’s departure date but the problems in possession are not an incident. That side of things remains a huge concern and the coach still has a massive hill to climb, the heavy run of fixtures his side faces after the upcoming international break not helping. 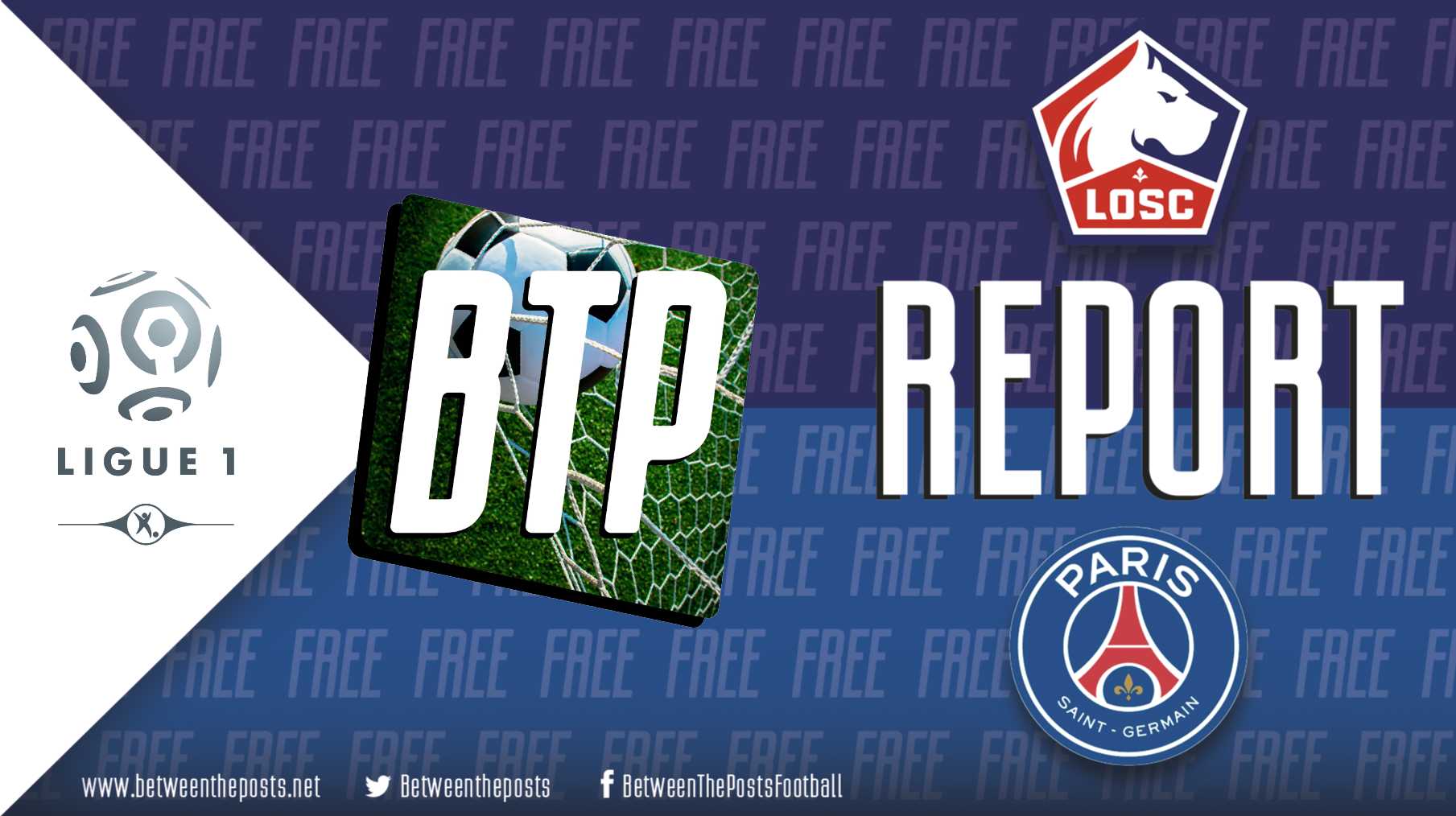