After ten minutes, Ralph Hasenhüttl changed his team’s shape to not only close the defensive holes but be the launchpad for adaptive buildups too. Against his coaching graduate, Ralf Rangnick struggled to find solutions as Southampton produced another impressive away display, to keep United tied.

The reunion between Rangnick and Hasenhüttl was destined to be at an elite level, after Leipzig stormed to second place in their first-ever Bundesliga season – Hasenhüttl in the dugout, Rangnick looking on from upstairs. Though sourness grew between two Ralph’s in Germany, stemmed from their creative differences, it’s their reputations from the Red Bull chain that have planted them in the Premier League.

Rangnick has improved elements of Man United’s structure, more noticeably out of possession, which doesn’t come as a surprise. However, on a surface level, United have struggled to execute opportunities, having only scoured fourteen times in the eleven matches they’ve had under Rangnick’s helm. Level on points with Arsenal, and one point off West Ham in fourth place, there is little margin for error if they are to remain in Europe’s top competition for the forthcoming season.

Southampton has had their fair share of rocky periods, but Hasenhüttl has always been able to offer his team a brutal swing on the occasion. They haven’t quite reached end-of-first lockdown levels of hype, but victory over Conte’s Tottenham may be one of Hasenhüttl’s finest to date, with their trademark pressing causing hosts problems and utilizing the third man in the final stage to continuously create chances. Building from such performances needs to occur to take the Saints to the next level.

United’s single change, from the game against Burnley, came up top. Cristiano Ronaldo started in the striker position, who replaced Edinson Cavani. Southampton was unchanged from the team that impressively came back against Tottenham in midweek.

Against Southampton’s usual 4-4-2 shape, Man United was assembled in a 4-1-2-3 shape, with Paul Pogba and Bruno Fernandes as part of the same line and Scott McTominay behind them in the midfield. Though circulation was lateral from the backline, as one may expect, United created early pressure thanks to Paul Pogba’s work on the left, one of the few players resistant to their opponents’ relentless pressure and collapsing off the ball.

On the left, Pogba was able to drop from a higher position to connect with deeper players, as well as provide a straight run within the build to enable progression forward. Southampton’s collapsing was effective at crowding around McTominay, but against Pogba, the Frenchman was the key to unlocking United’s offensive potential, against a backline that can be left open once a counterpress was triggered. 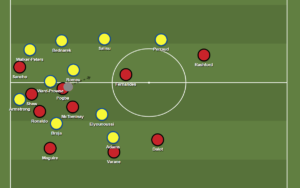 3rd minute: Having combined with Ronaldo, and receiving of Luke Shaw, Pogba was able to attract and bypass the Southampton press, with Fernandes free to receive with a vertical pass and Rashford holding the width on the right.

In these phases, Pogba could find Fernandes with a vertical pass into space, who was left free as the opposition midfield line worked in close proximity of each other. The more successful pass was to Jadon Sancho, able to directly take on Jan Bednarek or move into a narrower position and receive the ball at pace.

The two times Pogba and Sancho were engaged involved in early opportunities for United. The first saw an attempted cutback into Ronaldo intercepted by Oriol Romeu, with the angle towards a Fernandes run being blocked by both center-backs. The second saw Sancho receive just inside of Kyle Walker-Peters and further feed Ronaldo’s run between the center-back and left-back. Though Ronaldo rounded the goalkeeper, the power on the shot was not able to beat Romain Perraud’s recovery.

United was able to convert limited circulation or turnovers in their half into quick counters forward, with Sancho in golden areas behind the right-back. After ten minutes, this prompted Hasenhüttl into a change of shape as Southampton switched from the 4-4-2 into a 5-3-2 formation. Romeu slotted between Bednarek and Mohammed Salisu in the defensive line, with the wingers tucked closely to James Ward-Prowse. 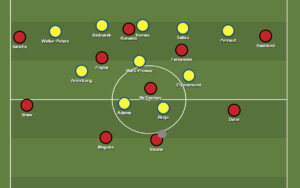 This change was able to slow the tempo down and give Southampton more defensive control against the United midfield. Not only could they match the three, but it resulted in them being less open when Rangnick’s team engaged with the ball high up the field. Though Southampton reaped defensive rewards, the hosts still flexed with their quick hitters to take a lead on the counter. As Perraud occupied Diogo Dalot deep, Fernandes was able to find Marcus Rashford with a long pass, behind Salisu. Rashford squared the ball across the goal for Sancho to finish, a well-executed opener.

From this point, Southampton gained a lot more of the ball and moved the ball around in a 3-1-4-2 shape, with Ward-Prowse dropping closest to the back three in able to orchestrate. United had set-up in a 4-2-3-1 high block, but these phases saw them in a 4-5-1 medium block, with Fernandes dropping into a flat midfield line. As a result, Hasenhüttl’s team exchanged the ball around without piercing through, often firing the ball towards the wide players, to try and open up space back inside.

For a few phases, Southampton slightly tweaked their personnel in the shape, with Walker-Peters on the backline, Stuart Armstrong on the right and Romeu back in the midfield, but after 33 minutes, they were back within the 4-4-2 shape that they had originally deployed. With more counterpressing situations being produced and the wingers still tucked in more central positions, Southampton had a lot more success in playing the ball through the lines, whilst the space to adapt to the aforementioned back three was still there. 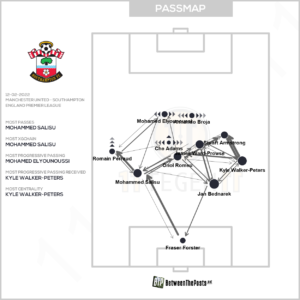 Narrowness between Southampton’s wingers is shown in their pass map.

The visitors were now filterring some more chances, with Armstrong moving into more central positions on the right. The best of their moves came a few moments before half-time, with the slight adaption between Walker-Peters and Romeu taking place. Romeu was able to find Che Adams who had dropped, with Armando Broja pinning Raphaël Varane to create space for Elyounoussi. Space was created for Perraud to receive on the outside, and although the execution of such shot didn’t test David De Gea that much, the build offered encouraging signs.

Southampton carried their first-half momentum through to the second and delivered an equalizer early. With Perraud receiving Fraser Forster’s switch, to bypass United’s 4-2-3-1 high block, a three-man combination was easy to form against the United double pivot. Pogba was engaged with Romeu, whilst McTominay lost track of Elyounoussi for the winger to freely receive and force Varane to step forward. Space was created for Adams behind the center-back, who completed the move with an excellent finish. 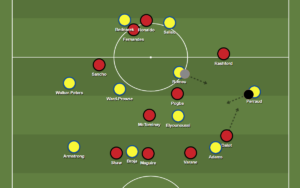 47th minute: Buildup to Southampton equalizer. Romeu was able to make a pass out wide (Grey ball, first pass) with very limited pressure, whilst poor coverage inside enabled the ball into Elyounoussi (Black ball, second pass) to be made, with Adams in space behind the defense.

Rangnick’s team had defended in the first half with midfield cohesion and compactness to keep Southampton limited, but in the second period, such cohesion had fallen apart. Pogba and Fernandes were now far too forward to reshape and support McTominay, who had made problems himself by jumping into duels. As a result, it was easy for Hasenhüttl’s team to trigger transitions on the inside.

They created several excellent chances to turn the game on its head. An up-back-and-through combination enabled Walker-Peters to dribble the ball inside and a four-versus-three be created against the backline. Though Armstrong had two options charging down the left, his shot from a poor location led to a poor attempt, created through an excellent move on the right.

The aim to open up the far side remained within the build, and just after the hour mark, Armstrong would have another attempt to put the visitors in the lead. Neat circulation on the left led to a sharp combination between Romeu and Broja to develop, off the line breaking Ward-Prowse pass, whilst Adams had pinned Shaw central. Armstrong was free to receive, in a similar fashion to Perraud’s first half-chance, but the shot was saved by De Gea.

Broja himself would have another chance on the counter a few minutes later, thanks to Elyounoussi drifting into central spaces once again to connect play between the lines. Broja brushed past Maguire, but was stopped by the Spaniard between the posts.

Game grinds to a messy halt

In a game stacked with adaptations and tempo changes, the match had lost its spark in the last quarter of the game. Hasenhüttl had made like-for-like substitutions, but Rangnick’s first change came late and made United more unbalanced. McTominay came off, being replaced by Anthony Elanga, who played further forward next to Ronaldo.

The switch to the 4-4-2 formation not only stopped higher commitment from Pogba or Fernandes, but United lost any form of connection through the center and was continuously forced to move the ball outwards. In open play, Southampton had a comfortable job in defending these scenarios, but couldn’t find the same transitional opportunities as they had done, partially due to Elyounoussi being replaced with twenty minutes left.

With more fouls and onus from United on the set-piece, the match had lost its quality come the end, despite still being in the balance. Southampton had a few runs but couldn’t test the United defense, whilst the hosts were reliant on the dead ball. The best of these came from a Harry Maguire header, well saved by Forster in additional minutes, but neither team could find a breakthrough.

Another example of why Expected Goals can’t be your sole source on how a game went. Based on chances, United should have bagged this by a significant margin, which did look this way after ten minutes, but the flexibility from Southampton stabilized their defense, whilst giving them solutions on the attack. Another very impressive display.

Having said that, United were heavily disconnected as the game went on and the yearn for an optimal defensive midfielder has never looked so obvious. Rangnick needs to find a solution without one for the time being. 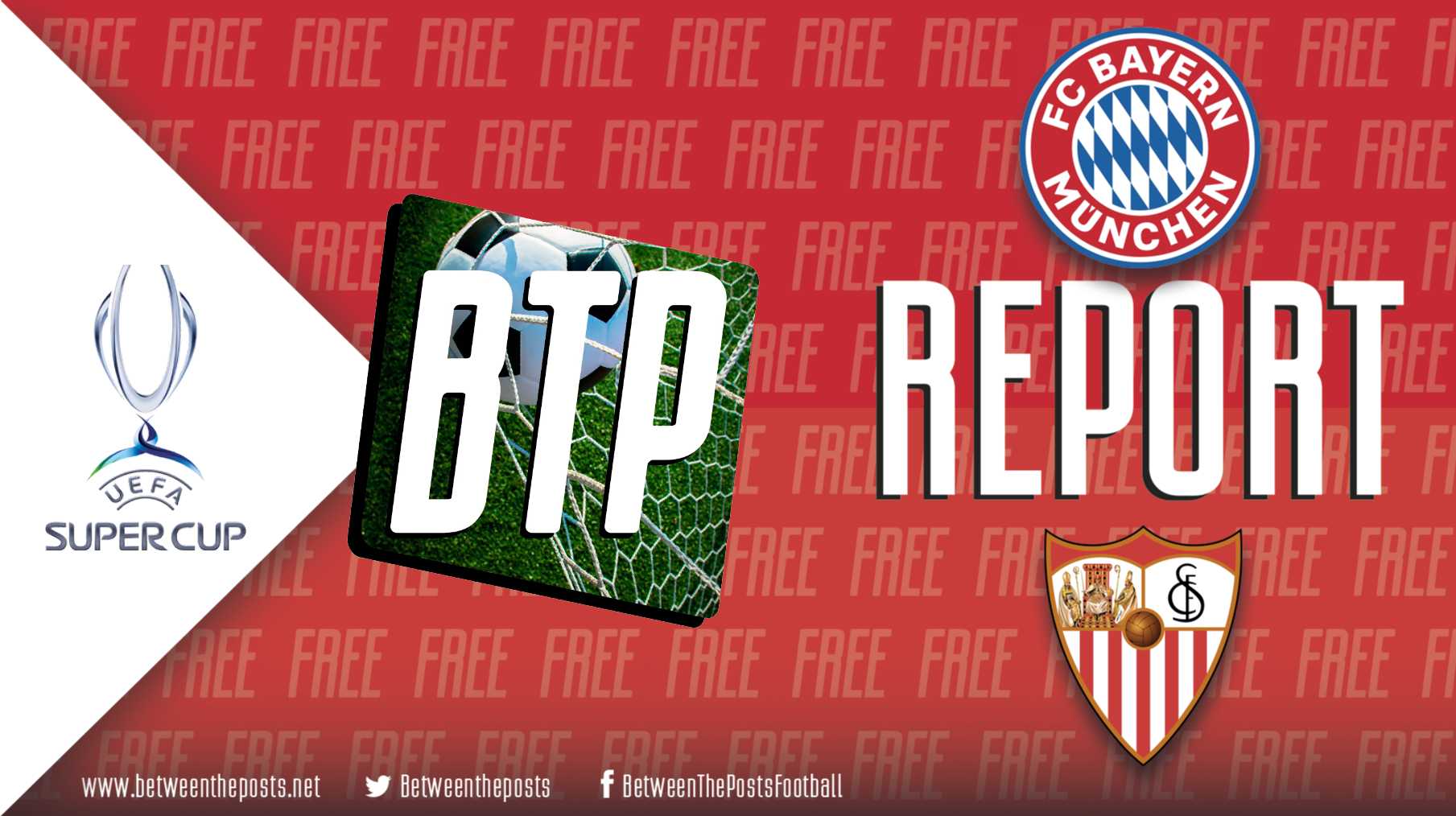 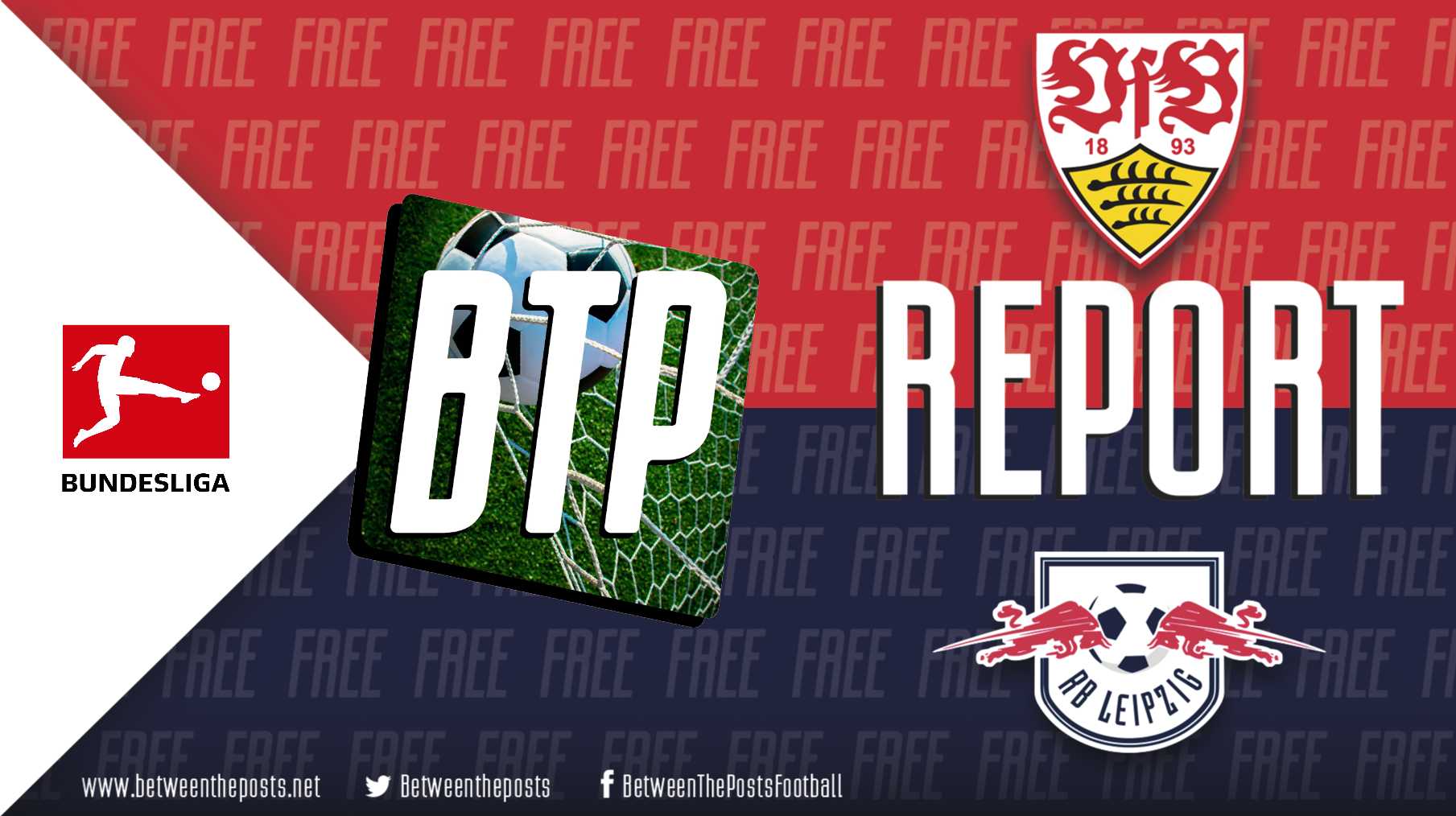