If the ball was a cake, we would expect Lyon to have the biggest slice, but Montpellier were hungry too.

Against a solid Montpellier team, Lyon did not display the same domination and efficiency they showed in the first couple of Ligue 1 games. The hosts were not impressed at all by the potential superiority Lyon have and kept the game under control. A red card did not help Lyon’s cause, either.

This game did not come at a perfect time for Montpellier, as they were going through a difficult start in the league, losing against current leaders Rennes and drawing against Bordeaux. Playing a game against what is probably the second best team in Ligue 1 right now could have added to their tepid season start, yet, Montpellier showed some real ambitions and quality to beat Sylvinho’s side.

Montpellier lined up in their trademark back five set-up, led by the veteran Vitorino Hilton in central defense (42 years old in 2019, 17th season in the French first division). The shape was resembling something of a 5-2-1-2 system, with a double pivot in midfield, Mollet in the number ten position and the attacking duo Laborde-Delort upfront.

As for Lyon, they had started the season with positive results. The new project, led by the Brazilian duo Juninho-Sylvinho carries high expectations. Lyon started the game in the same 4-3-3 shape they started the season with. The team looked ready, committed and with a certain collective spirit, however it should be noted they won their first two matches off the back of impressive finishing and early red cards for the opposition.

No, Montpellier would not give away ball possession without a fight

Montpellier has been known for the defensive efficiency of its back five system, but also for their very conservative and somewhat boring approach on the ball. On the other hand, Sylvinho seems to be a coach interested in controlling games through ball possession.

If the ball was a cake, we would expect Lyon to have the biggest slice, however in this match, Montpellier were quite hungry too. 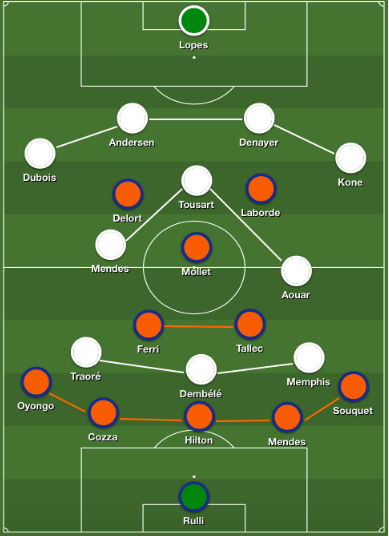 The first minutes of the game were a raging battle of pressing, duels, second balls. A dogfight. During this who will hit the hardest sequence, Montpellier were the most dangerous side already. After a minute playing, Cazza hit the post on a set piece delivered by Mollet.

Then, the game got a bit more calm and two clear structures were revealed. By playing center-backs with lovely feet, Lyon would build out from the back and used the fullbacks in low positions to receive the ball. Subsequently, they would try to get the ball forward pretty quickly.

Montpellier were holding a medium-to-high block, A medium block refers to a team that retreats in their own half out of possession, generally only disrupting their opponents some way into their own half. A high block refers to a team that regularly leaves their own half out of possession, to disrupt their opponents far into the attacking half. A medium-high block is well… in between these two variants. trying to congest the central part of the pitch. Mollet, the number ten, was tasked with man marking Tousart. The central midfield part of the structure was the weakest, as there were often only two players to cover the whole width, but all this was well compensated by the back five stepping out to keep free men under control.

Therefore, it was very important to make the defensive runs on Aouar as he would be free when the ball was on the opposite side. Once again, Sylvinho showed how careful he can be with his offensive animation. Indeed, the fullbacks seldom pushed high to overlap When a wide player, most of the times a wing-back, runs outside to fill in the space left by a winger going inside with or without the ball, this is called overlapping. and remained in more traditional positions. 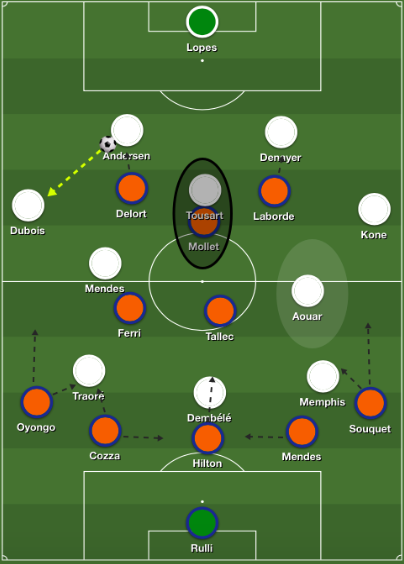 Lyon did not create much offensively, as they lacked numbers in attack and Montpellier won most defensive duels. They had only one shot on target in the first half, from outside of the box.

Montpellier dominated and opened the scoring

As stated earlier, Montpellier were not interesting in leaving a huge amount of possessionto Lyon. They actually had 52% possession in the first half.

Their plan was to build down the left flank, with all those central players compact in the same vertical corridors of the field. This allowed to create an interesting density inside Lyon’s zonal 4-1-4-1 defense. Besides the structural stakes, the most important was that Montpellier played with a lot of pace, tempo in the passing, overlaps and sometimes switched to the free men on the right when Lyon’s block was pinned on the left. They also did not hesitate to play long to bypass the midfield, force Lyon back and win meters. 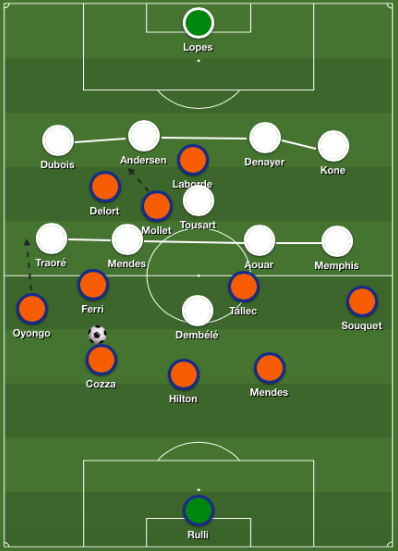 Montpellier’s buildup against Lyon’s medium 4-1-4-1 shape. Mollet was very dynamic and likely to exploit space in the back of Tousart or the fullbacks.

As a consequence of their domination, Montpellier were able to create the most interesting situations. Cazza hit the post after 60 seconds, Lopes made an impressive on Delort minute 14. They even earned a penalty minute 35 after Andersen lost his defensive duel against Laborde, it was taken by Delort who hit the post. Finally, the opening came through a stunner from Souquet minute 41.

During corner-kick situations, the ball was cleared away and Souquet volleyed it to send an absolute missile under the bar. The goalkeeper didn’t even have time to move.

Coming back from the dressing room, Sylvinho’s men had to show some kind of reaction.

Leading 1-0 on the scoreline, Montpellier were comfortable sitting a little bit deeper and do what the team does best: defend its box. Lyon did not change much to their animation, with five players attacking: the forwards, the central midfielders and five players left to cover.

The team was quite intense, yet all their hopes in the 51st minute, when Koné received a red card after an altercation with Delort. Thiago Mendes immediately switched from midfield to the left back position, and the team carried on playing in a 4-4-1 / 4-2-3 formation, depending on the position of the wingers.

Lyon still had over 60% possession until the 60th minute; this is also the sequence where they had the most shots. However, the numerical inferiority was difficult to handle to create clear situations and Montpellier were still patient in defense. Lyon generated only 0.7 expected goals. The amount of goals a team is expected to score based on the quality of the shots they take. 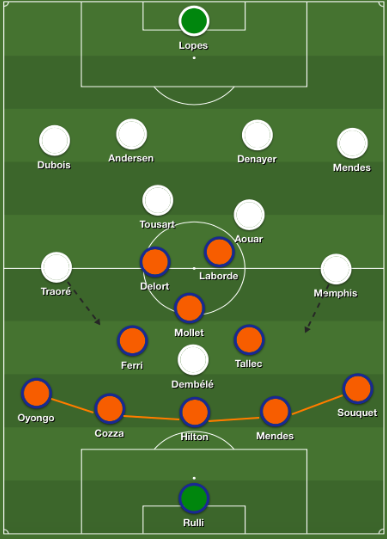 Lyon’s flexible 4-4-1 shape after Koné was sent off.

After an hour of play, Lyon reached their physical limits and were not able to keep up with the same intensity anymore. Thereafter, the hosts recovered ball possession, restarted playing higher and might have scored another goal if they took more risks forward. The scoreline remained unchanged, meaning Montpellier had their first win of the season, and a prestigious one.

After two wins in which all circumstances were in their favor, Lyon faced their first defeat against a tougher opponent. PSG losing to Rennes created the hope of maintaining a three point gap between the Lyonnais the the Parisian Giants. Back to square one.

This is a first warning for Sylvinho, but we have to consider the fact that it is still August and teams are still far from being fully ready to deliver week in week out. The team is building a new identity and it needs some more time.

As for Montpellier, they finally got the win they deserved given how balanced the team was. A real defensive know-how, technical midfielders – even without Savanier – and good level forwards for Ligue 1. Manager Der Zakarian can even deliver a tactical masterclass from time to time like this game.This team will be interesting and is definitely to be kept on the radars. 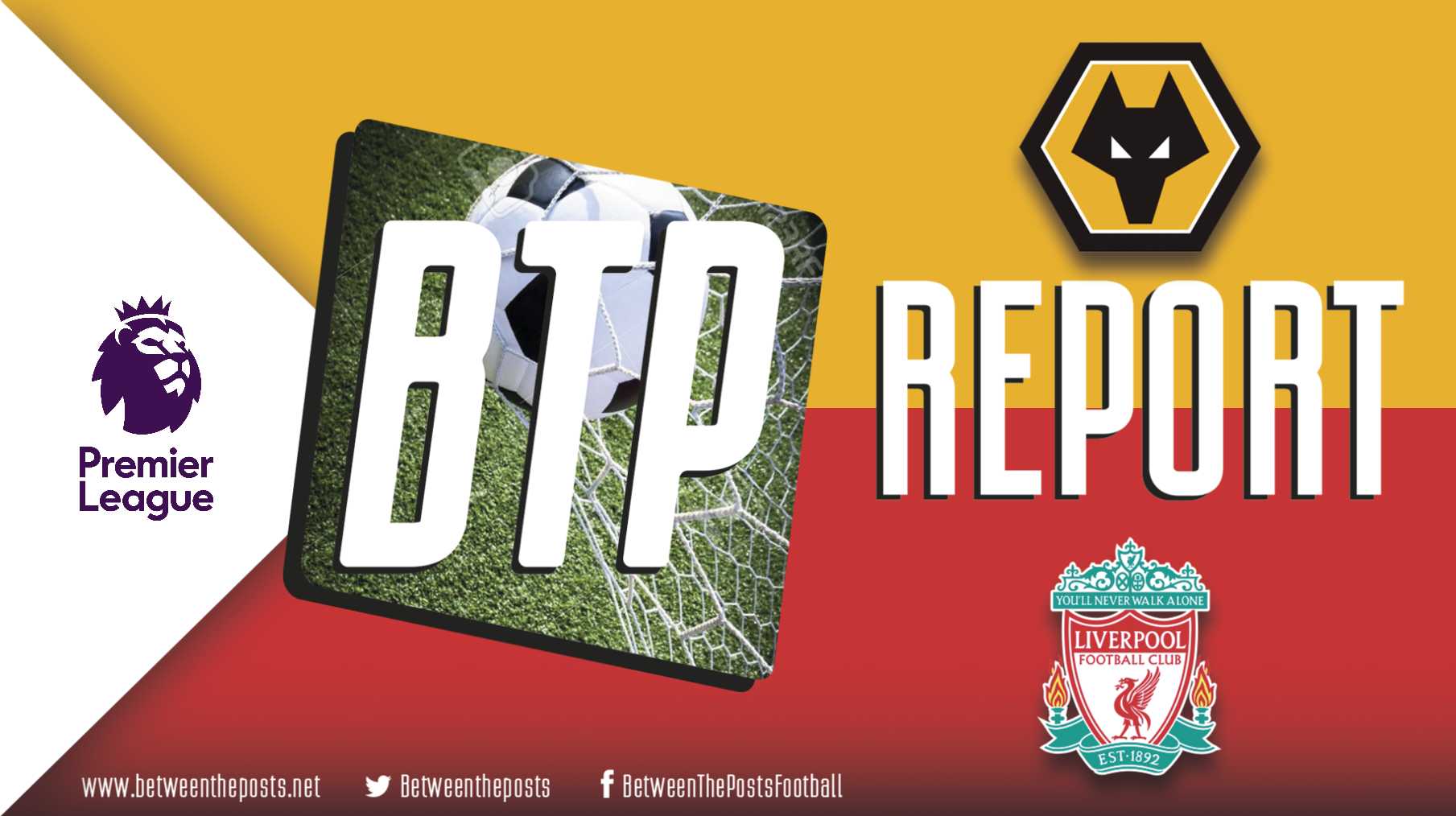