Nantes dominated possession thanks to an early red card for Montpellier. This game however was ultimately decided by a counterattack and a set piece.

Nantes manager Vahid Halilhodžić made nine changes following an easy midweek cup victory over Chateauroux. Ciprian Tătăruşanu replaced Maxime Dupé in goal. Diego Carlos, Lucas Lima and Enock Kwateng returned to the side in Nantes’ 3-5-2 system with Fábio, Charles Traoré and Matt Miazga making way. Valentin Rongier and Andrei Girotto were brought back into the starting eleven in place of Imran Louza and Rene Krhin. Kalifa Coulibaly, Lucas Evangelista and Anthony Limbombe also dropped out of the team. In their place were Majeed Waris, Emiliano Sala and Abdoulaye Touré.

After a promising start to the season, Michel Der Zakarian’s Montpellier were without a win in three matches including a shock 1-0 defeat to Sannois in the Coupe De France. There were two changes to the team that lost just four days ago. Veteran Vitorino Hilton and Pedro Mendes returned in defense in Montpellier’s 3-5-2 / 3-4-1-2 base shape. Paul Lasne and Nicolas Cozza dropped out of the team. 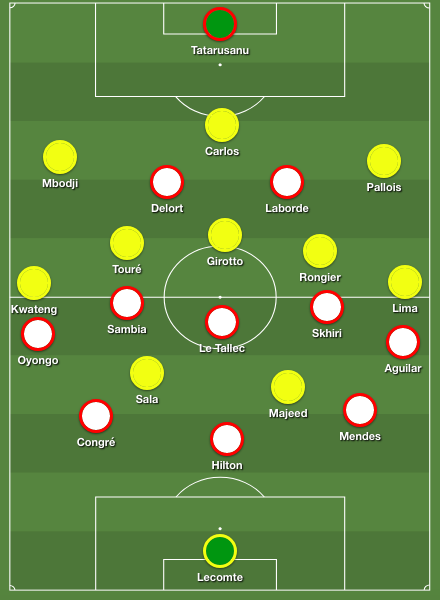 During the build-up, Nantes showed a possession-oriented approach in their own half. They looked to take advantage of the three-versus-thee superiority by passing the ball across the backline until their left and right center-back were afforded space to dribble up the pitch. This was aided by the fullbacks staying higher up the field in order to pin Montpellier’s wing-backs back. The midfield rotated well, creating passing lines with good timings and angles of support to progress the ball.

Nantes handled their positional build-up controlling deep possession from a structure initially favouring wing occupation with high and wide wingbacks and the ball-near eight in the halfspace <i class=”fa fa-sort-desc” aria-hidden=”true”></i> <span class=”spoilerexplanation”>If you divide the field in five vertical lanes, the halfspaces are the lanes that are not on the wing and not in the center. Because there is no touchline like on the wing, players have freedom to go everywhere. But this zone often is not as well-defended as the very center. This makes it a very valuable offensive zone to play in and a lot of chances are created by passes or dribbles from the halfspace.</span> supported by the side-back. This was especially the case of Touré and Kara Mbodji due to the majority of their possession spells coming down the right side in the build-up.

For the first 19 minutes, Montpellier defended in a 5-3-2 shape, which would sometimes turn into an asymmetrical 5-2-1-2 shape, depending on the movements of Solomon Sambia. After Gaëtan Laborde’s picked up a silly red card, Montpellier’s approach in this match changed to a much more passive 5-3-1 shape against the ball. They maintained this shape throughout the first half and shifted passively to the ball-side, keeping the distances in their midfield line small. The issues that arose from this were the additional two players in the hosts’ build-up reduced Montpellier access to press and manipulated their shifting patterns.

This was exploited well by Nantes’ players through combinations,  good movements to support the ball-carrier and quick switches to the far side. As the half went on, the starting position of Mbodji and Pallois was more aggressive, allowing Nantes to construct their attacks closer to the opposing goal as Montpellier began to drop deeper towards their own box. 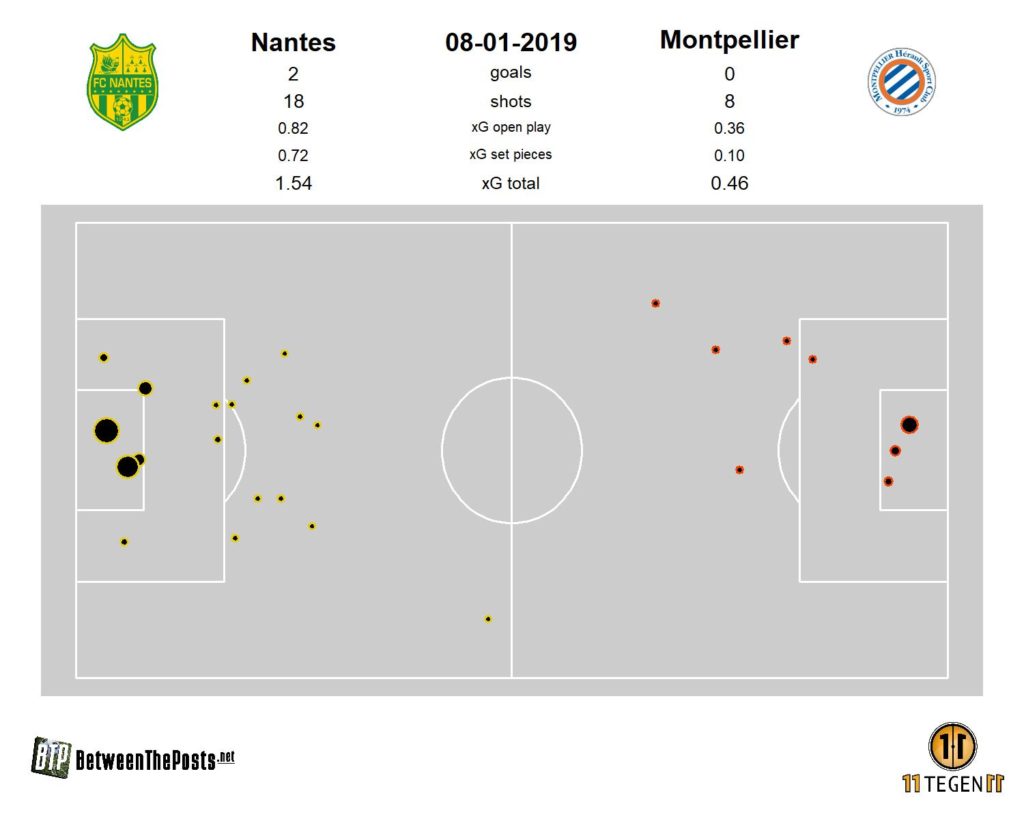 For most parts of the game, Nantes had control of the game in possession even if they found it hard reaching dangerous zones consistently, due to Montpellier defending with high numbers and poor execution of the final pass. Their main offensive success came from the right-hand side, especially in the first half.

Build-up commonly progressed through Mbodji who was commonly found in more offensive positions, aided by immediate presence diagonally inside from Touré and Kwateng on the wing. Nantes based their attacks on strong combinations down both flanks with a means of finding one of their attackers or wing-backs in a position to cross the ball via a lofted pass or cutback. To facilitate these attacks, Nantes created triangles in wide areas to combine three-versus-three on the outside, relying on dynamic third man runs <i class=”fa fa-sort-desc” aria-hidden=”true”></i> <span class=”spoilerexplanation”>A passing combination between two players, while a third player simultaneously makes a run, usually in behind the opponent’s defensive line. After the initial combination, the ball is quickly played in depth for the third player to run onto.</span> from the midfield or diagonal movement in behind from the attackers to breakthrough.

Nantes would progress their attacks through their positional movements designed to progress the ball with minimal pressure, especially when Pallois was in possession. In these movements, the central midfielder on the side of the ball would look to pin the midfield of the opposing team with clever positioning higher up. Valentin Rongier in particular would move up and occupy the space between the midfield and defensive lines in order to pin their positioning.

When he moved up into said position, space would open up ahead of the midfield block for the ball carrier to penetrate by a pass or dribble, allowing one of the attackers to drop deep to receive or consequently narrow Montpellier’s defense opening diagonal passes into the flanks.

Simultaneously this pinning movement took away the opportunity for the away side to pressure the ball-holder. It created a disconnection in their pressing. If the midfielders were to step out to apply pressure in order to close the space and minimize the home sides’ time on the ball, the pressing could be easily eliminated by a simple wall pass into the flanks with Rongier offering a diagonal passing line in the halfspace.

They achieved their dominance by gradually pushing Montpellier into their own half through a not too complex wing-oriented approach. The approach of their attacking strategy was to focus on wide zones in order to create a breakthrough, mainly using diagonal passes and looking to exploit the forward runs of the wing-backs and attackers. From here, continual crosses into the box or cutbacks were used to aiming to catch the space in front of the defenders to get a shot off at goal or react off of loose balls. 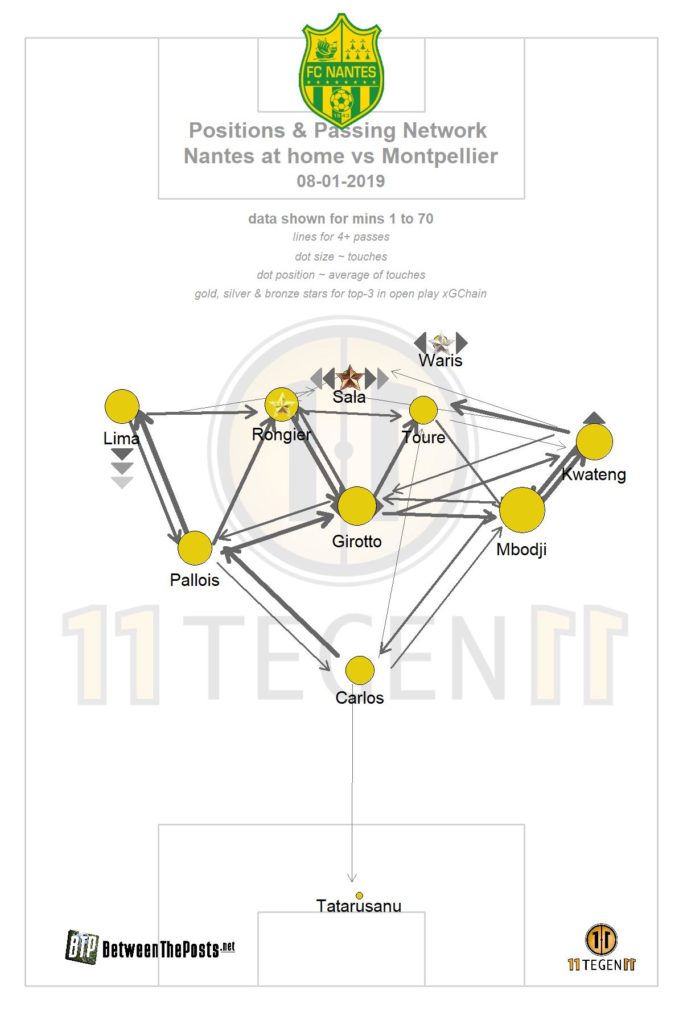 Nantes get the lead through counterattack

After the interval, Nantes continued to focus on using the deep halfspaces to construct their attacks to exploit the vulnerability in Montpellier’s pressing. Due to the distances the midfielders had to cover on either side when shifting, along with the wingbacks being pre-occupied with the opposing wingbacks, the far-side halfspace was continuously emptied allowing Nantes far-side defender to access the temporary space.

Due to Nantes’ increased desperation to score, the wide defenders of Nantes were positioned very high, allowing the midfielders to advance further up as they looked to apply more pressure on Montpellier’s defense. When the ball was lost, the numbers around the ball meant they could effectively counterpress. In these situations, even the side-backs would participate in the pressing, while the ball-far defender would shift steadily to cover the central axis. Nantes were generally successful in this because their shape moved towards the ball, getting earlier access to the ball’s location and blocking the immediate progressive passing lines.

At times, however, this left a dangerous underload at the back, with just Carlos in their own half. This occasionally saw Montpellier win the ball in areas which presented opportunities to run at the Nantes defense and create promising counter-attacks. However, they failed to exploit this predominately because of the lack of options available to the ball carrier and retreating midfield runs from the hosts to collapse into organization.

In the 62nd minute, the home side got the lead after a beautifully executed counterattack. Majeed was on the end of it, converting coolly underneath the goalkeeper. 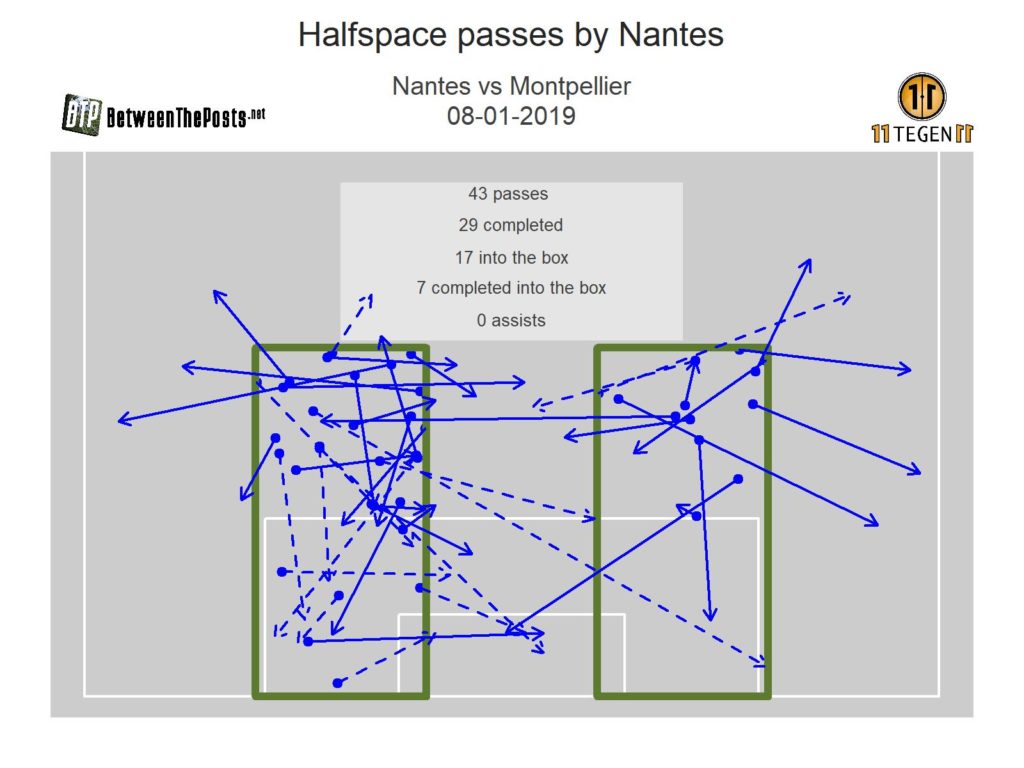 After going a goal down, Montpellier’s formation while pressing  changed to a 4-2-1-2 / 4-3-2, which was dependent on the movement of substitute Florent Mollet. The Frenchman would move between the left halfspace and ten spaces to aid for better connections in possession and more direct access in pressing out of possession. Ellyes Skhiri formed a double pivot with Damien Le Tallec at the base of midfield. Petar Škuletić was also introduced to offer a direct route and box threat from crosses, whilst the fullbacks often made diagonal underlapping movements to exploit this. After this change, they became more aggressive in their pressing and started to engage more frequently with Nantes backline.

It was not all plain sailing for the hosts, however, and Montpellier began to find more space in and around Nantes midfield and enjoyed longer spells of possession. They started to find ways down the flanks to set up their combination game which saw them create their best chance of the second half as Delort headed wide from yards out. That was the theme of their attacking play, they had a number of promising attacks in the second half but failed to capitalize by wasting these situations.

Victory for Vahid Halilhodžić’s Nantes sees them extend their five-game unbeaten run at home. The hosts were very impressive in their structured possession plays and regularly bypassed the lines of pressure to access the final third, though were quite wasteful with the last action. On the other hand, Montpellier caused Nantes some problems going forward despite the red card and defended against the ball relatively well given the circumstances. 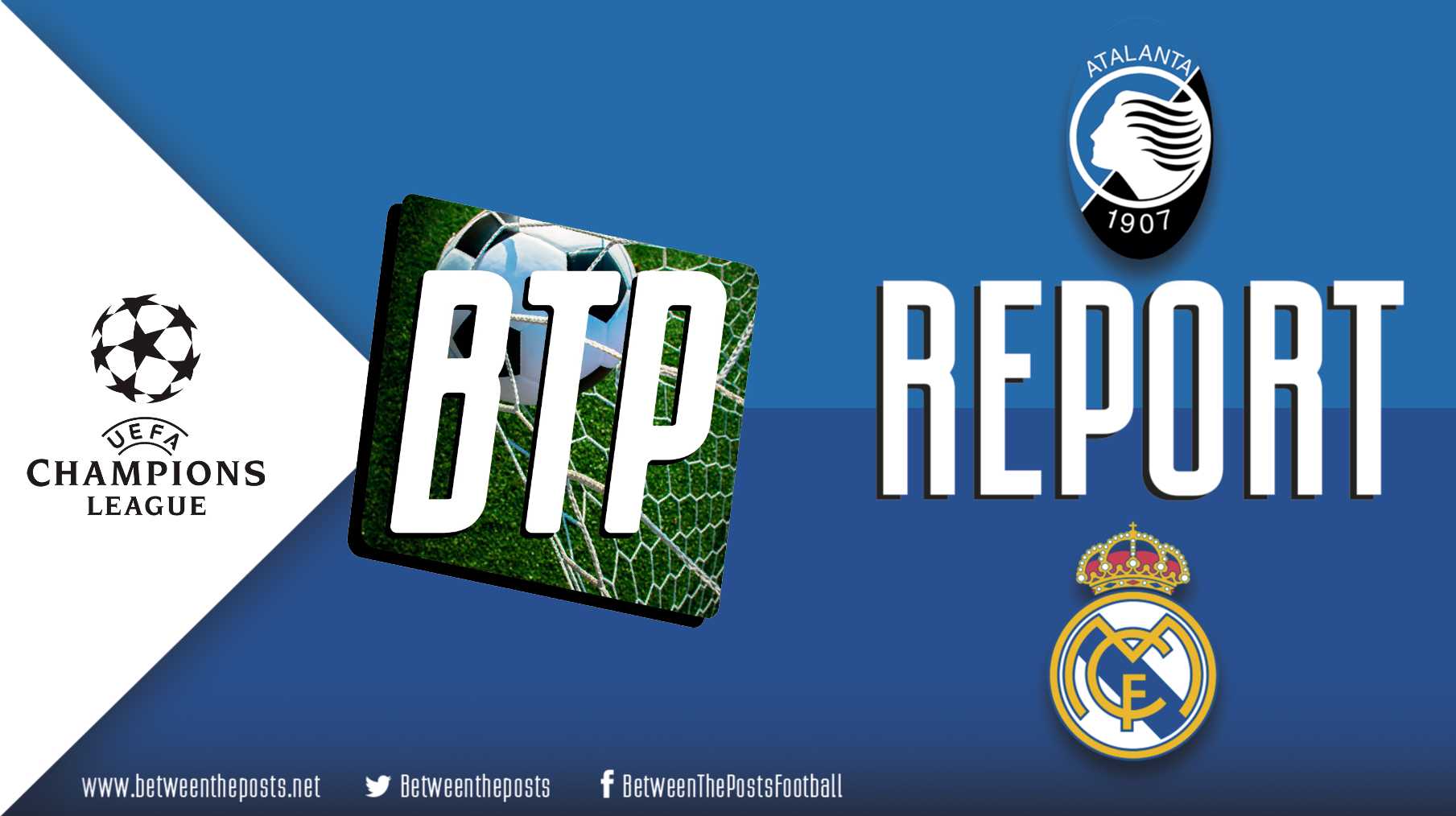 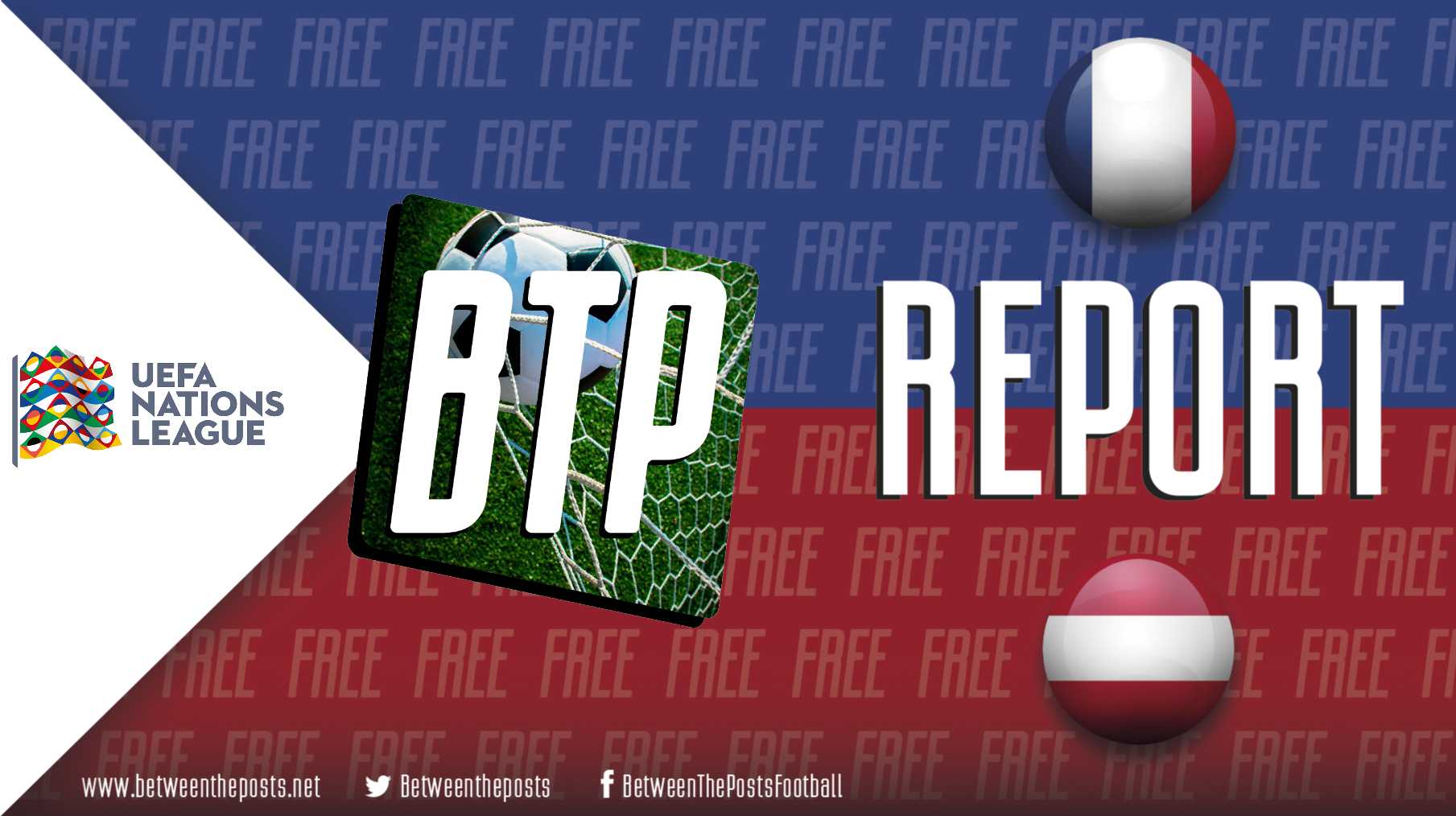