Lyon came home with the three points after a hard-fought win against eighth-placed Nantes, in a game that could have gone either way. They took the lead early on in the game and, despite a late red card, managed to hang on to it.

This Ligue 1 fixture saw last season’s fourth-placed Lyon side take on last season’s number eighteen in the form of Nantes. It was also a managerial clash between two former friends, as Lyon manager Peter Bosz and Nantes manager Antoine Kombouaré played together for Toulon in the early nineties and even shared a house together for a couple of months.

Lyon lined up in a 4-2-3-1 formation on paper. Moussa Dembélé started as the lone striker with Houssem Aouar just behind him, while Maxence Caqueret and Bruno Guimarães operated together in holding midfield. New signing Xherdan Shaqiri and defender Jason Denayer could only make the bench as they were not deemed fit enough to start the game.

Nantes lined up in a 4-2-3-1 formation themselves and saw a reversal in roles with Marcus Coco leading the line and Moses Simons on the left, which came as somewhat of a surprise. Most of the times, they were seen defending in a compact 4-1-4-1 or 4-4-1-1 formation.

Nantes initially looked to press Lyon high up the pitch but did not enjoy much success in doing so, outside of a few sloppy moments from Lyon players during the buildup. Lyon enjoyed more of the ball, and thanks to their unmarked fullbacks taking up high and wide positions, they found it easy to progress the ball to the final third The one-third of the pitch that is closest to the opposition’s goal. despite having their central passing options marked out of the game. 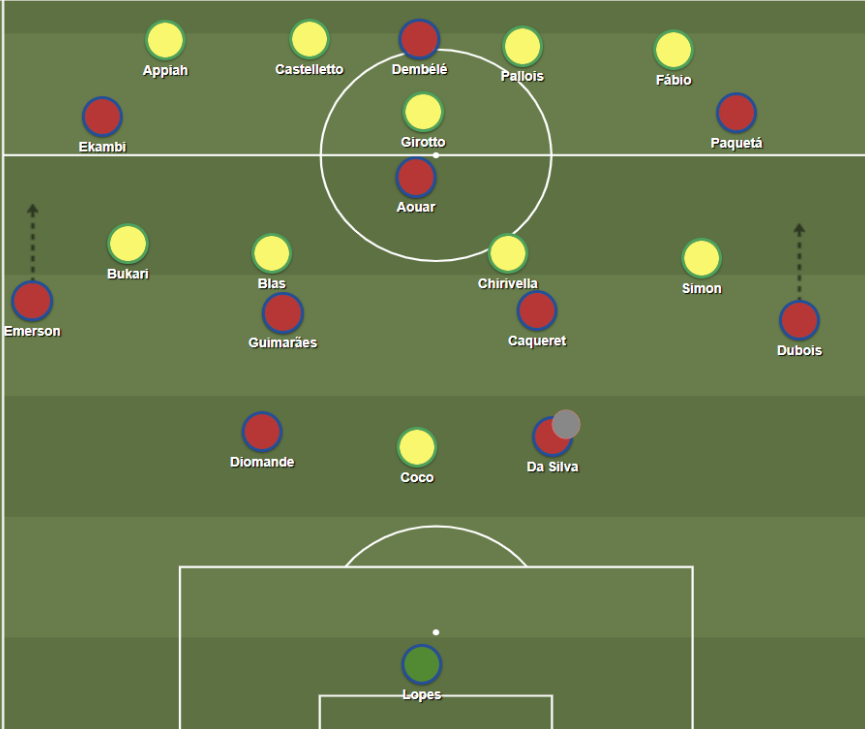 Lyon’s center back finding it easy to progress the ball using his near side fullback against Nantes’s 4-1-4-1 high press.

While Nantes had Lyon’s double pivot   Two central midfielders next to each other. marked out of the game, they would still leave one of their center backs unmarked. That unmarked center back would carry the ball forward, provoke the Nantes wide mid to close him down, and play the pass to the unmarked fullback in space to progress the ball. That fullback could then play the ball to one of Lyon’s attacking players and enter the final third near the edge of the box and, Lyon could fashion chances that way

However, Lyon did not make the most of it and, for the first thirty or so minutes the game was very even. Nantes found opportunities of their own on the break. Both sides kept knocking on the door without bringing it down.

A change in approach for Nantes and Lyon take the lead

Nantes eventually gave up their high press and took up a 4-4-2 medium block A medium block refers to a team that retreats in their own half out of possession, generally only disrupting their opponents some way into their own half. instead. It saw Lyon find themselves deep in Nantes territory even more often, automatically meaning their deeper players had more time on the ball. They often used a midfield rotation which saw Aouar move to the left halfspace If you divide the field in five vertical lanes, the halfspaces are the lanes that are not on the wing and not in the center. Because there is no touchline like on the wing, players have the freedom to go everywhere. But this zone often is not as well-defended as the very center. This makes it a very valuable offensive zone to play in and a lot of chances are created by passes or dribbles from the halfspace. as the right-sided pivot player took up a higher position himself. It meant that Lyon’s attacking shape resembled 4-3-3 more than 4-2-3-1 at times. 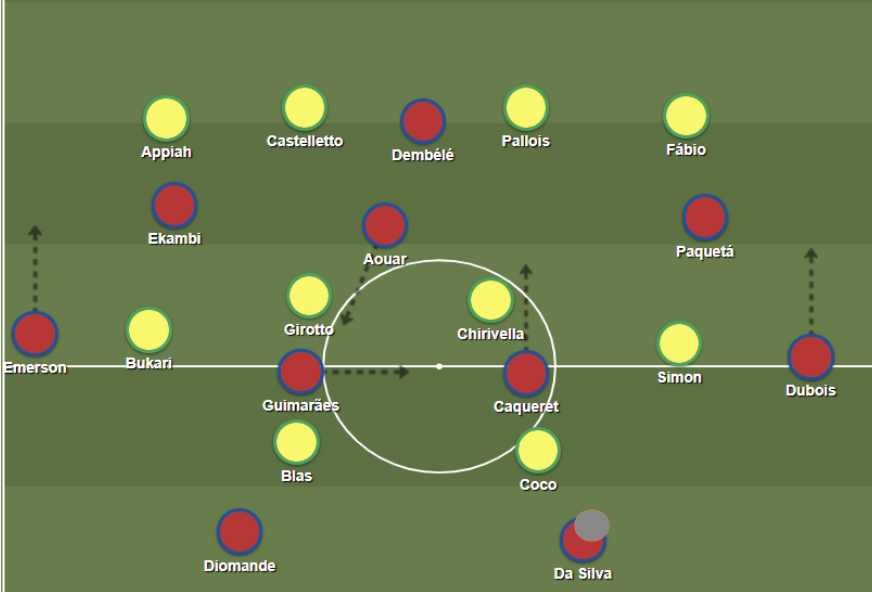 This rotation meant that Bruno was often free to receive the ball between the two central defenders as the other two Lyon midfielders occupied the attention of Nantes’s double pivot. He got to receive the ball as the lone pivot in the 35th minute of the game. With time and space on the ball, he spotted the run of Paquetá in behind Nantes’s defense. Paquetá’s took the pass well and bullied the Nantes left back to get a shot away. It was saved by Lafont but Dembélé put the rebound into the back of the net to give Lyon the lead.

Nantes – who were very direct in possession all game long – took the game to Lyon right from kick-off. They managed to win a corner and, if not for a very good Lopes save, would have equalized from it. Another chance came about ten minutes later as Da Silva conceded a free-kick right on the edge of the box for which he was yellow-carded. Nantes forced another good save out of Lopes and finished the first half very much in the game. 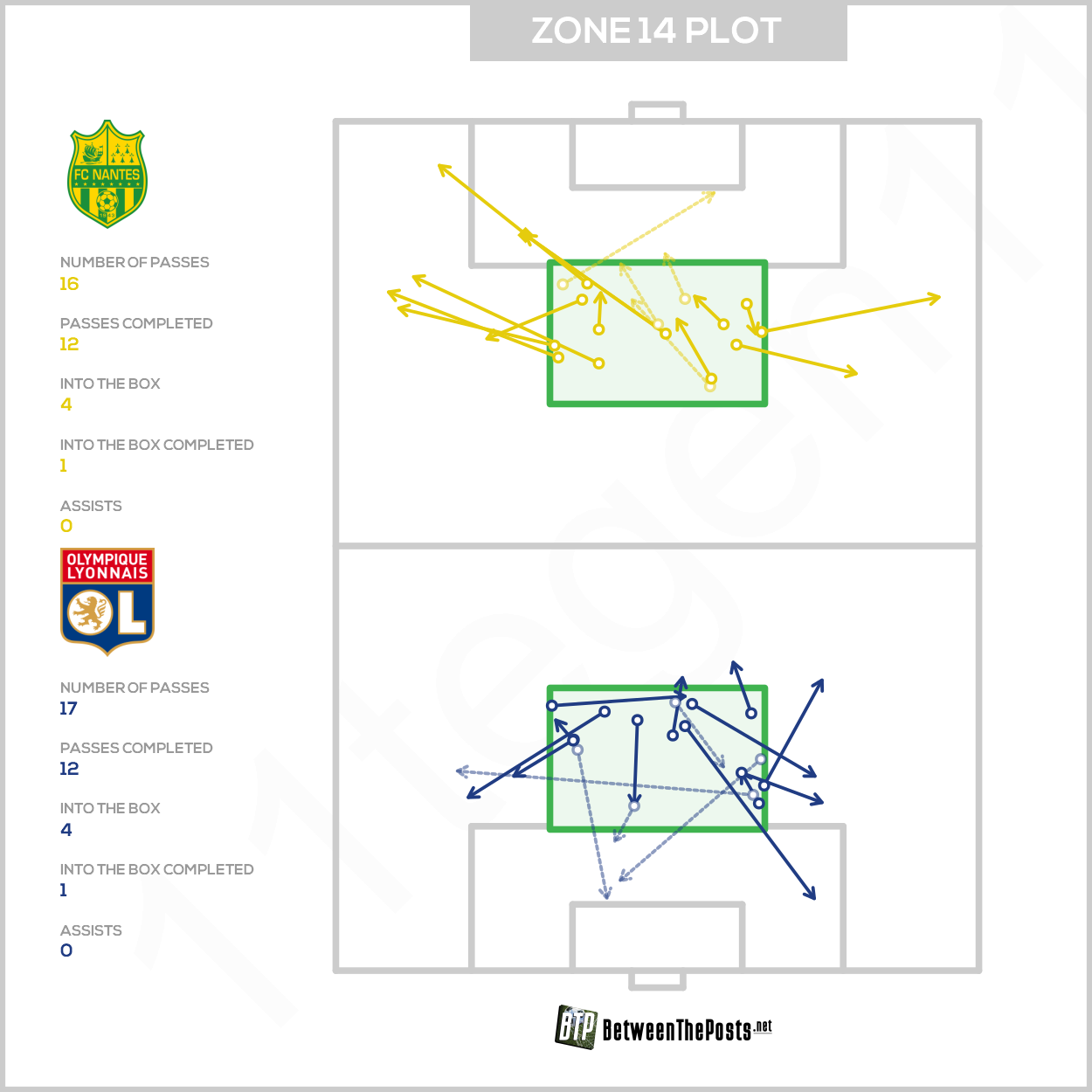 Nantes started the second half even stronger than they ended the first one. They pressed Lyon high again but with the energy that was missing in their initial high press. It saw Lyon turn the ball over much more than before and, it seemed like Nantes were coming closer and closer to equalizing with their lightning counterattacks. For the first twenty minutes of the first half, Nantes were the much better side as Lyon could not manage to get a single shot away while Nantes kept having some goes on goal at the other end.

Nantes, mostly due to bad finishing, could not make the most of these twenty minutes. Lyon looked to be back in charge of the game before Da Silva got sent off for a second yellow card for a similar offense to his first in the 78th minute.

Now a man down, Lyon adopted a 4-4-1 shape off the ball as they looked to hold onto the lead with ten men. Denayer replaced Dembélé on the pitch and slotted in at center back. Nantes, now against ten men, were dominating possession for once in the game and had another go at equalizing the game. They came close with an 86th minute Moutoussamy chance but unfortunately for Nantes, he could not get a clean enough connection and Lopes got to make another save to keep Lyon ahead.

The final whistle blew some five very nervy minutes later. Lyon held onto their first-half lead with ten men in a very tightly fought affair and went home with their first win of the season in the bag. 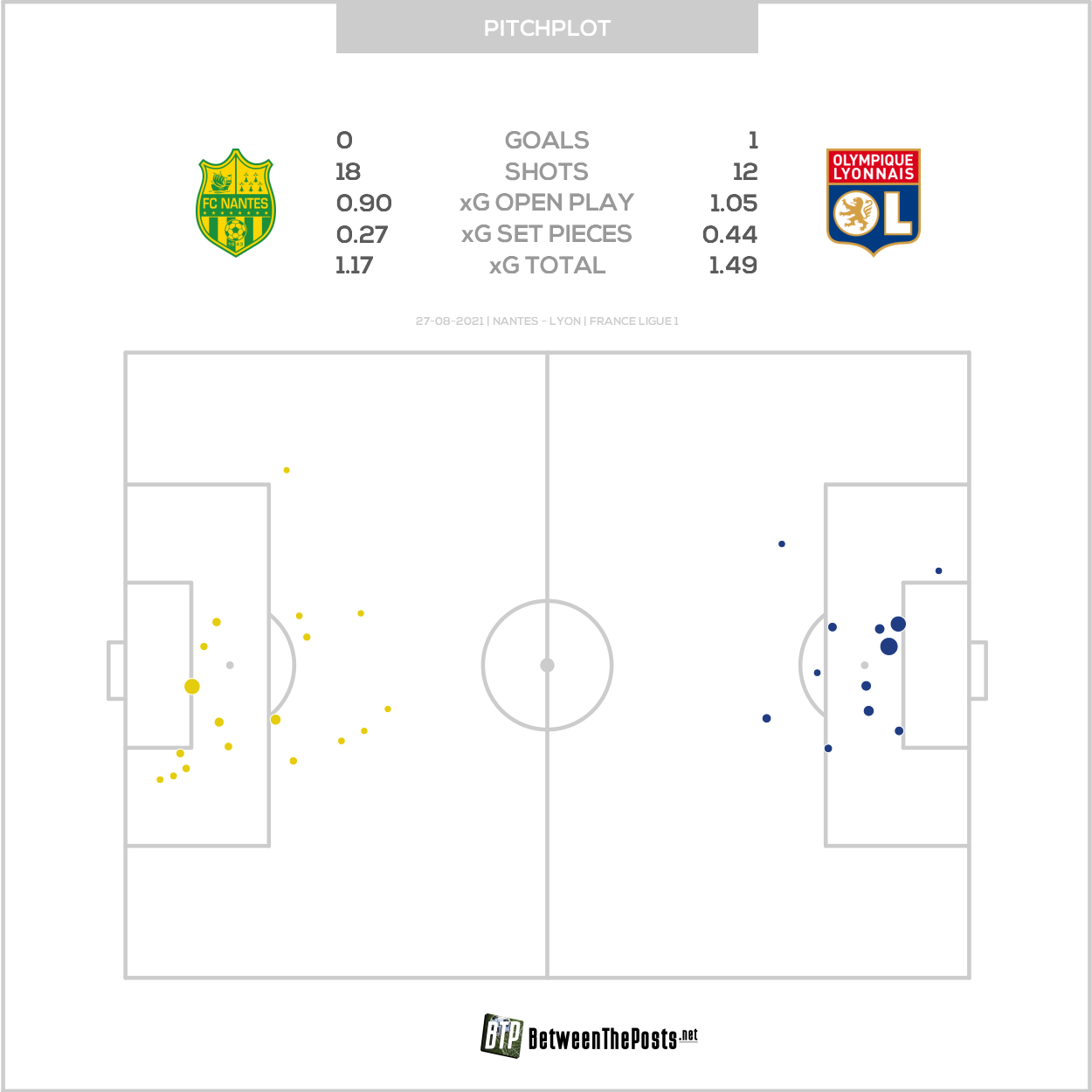 A win away from home in difficult circumstances after a couple of draws on the trot was exactly what Lyon needed to kickstart their season. The sloppy moments need to go away if they are to challenge for the CL spots again but, there were also enough encouraging things on the pitch for Lyon supporters to get excited over.

Nantes, on the other hand, also did very well against a team much better than them on paper. They were in the game from start to finish and, on another day, could have easily had the three points. Moses Simon, who already has three assists in the league this season, enjoyed a brilliant game and is a player to keep an eye out for this Ligue 1 campaign. 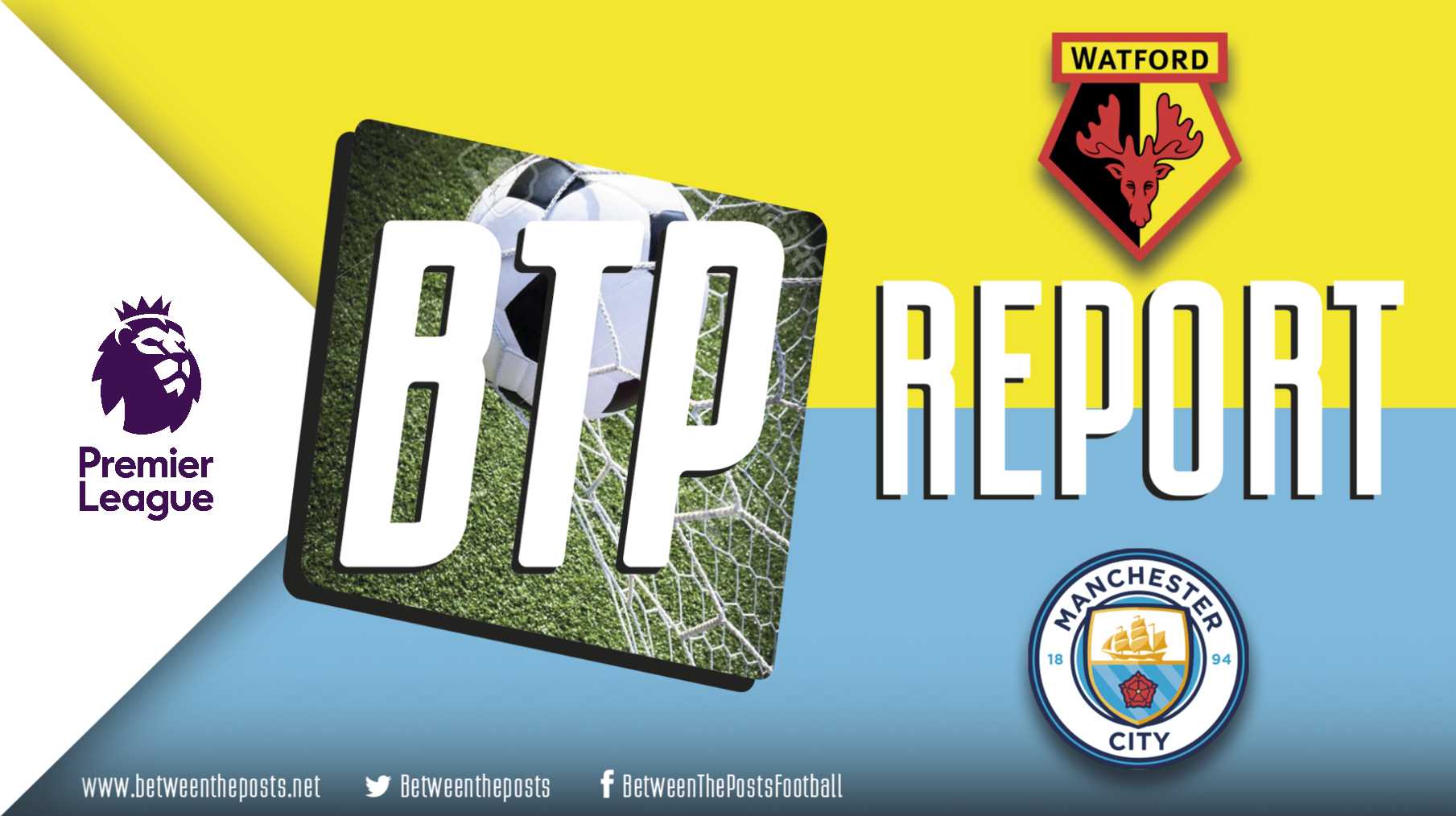 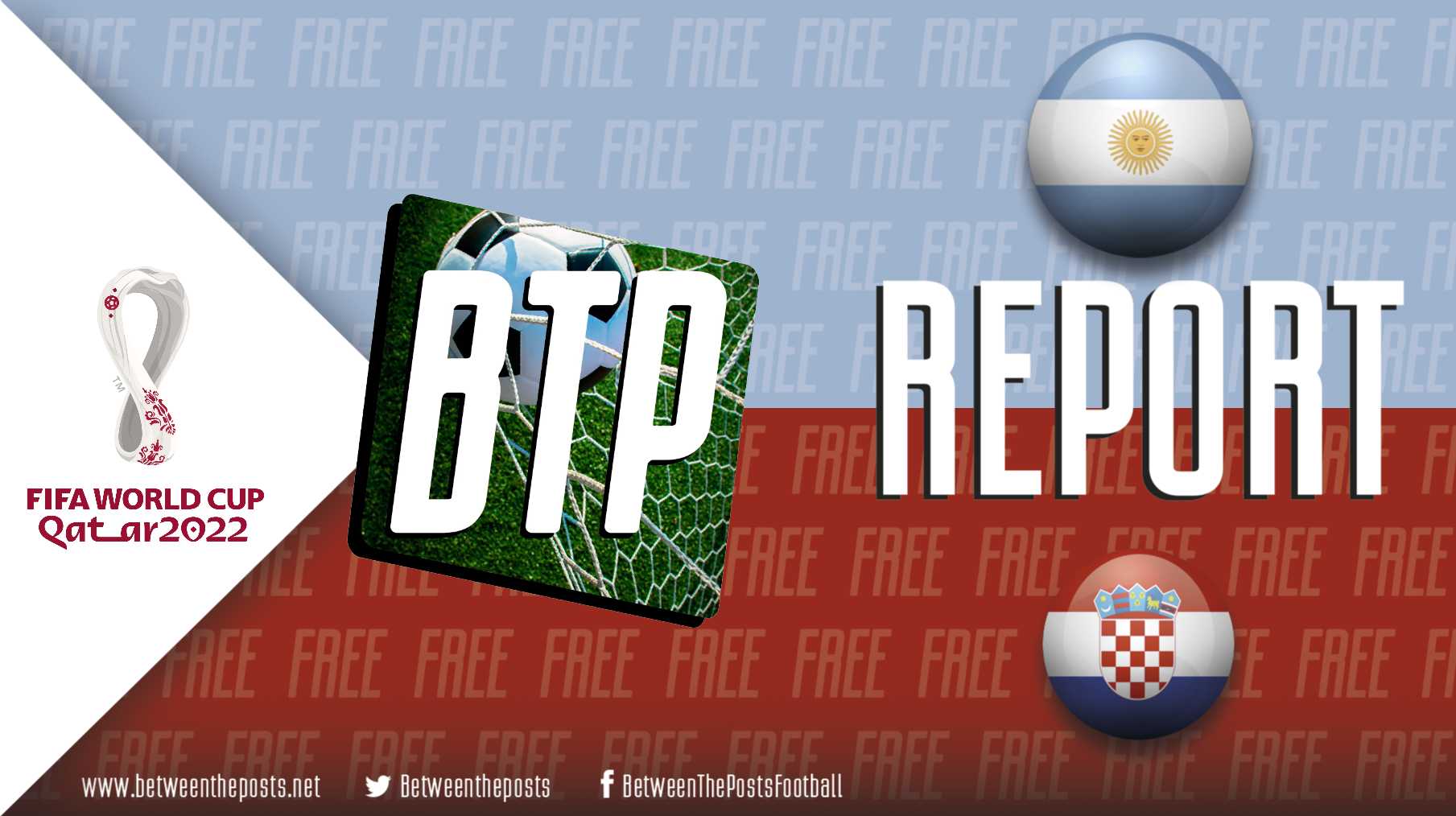