In a well-rounded display, AC Milan’s pressing limited Napoli’s ability to get into an attacking rhythm. The away side then capitalized, as exceptional movement in the box by Milan’s Ibrahimović saw him put away two crosses. Bakayoko red card heavily affected Napoli’s comeback efforts after Mertens had given them hope. A lack of clinical finishing from Napoli allowed Milan to see out the game fairly comfortably.

The Milan rebuild seems to be taking shape in this truly intriguing Serie A campaign. Heading into this marquee clash, Milan were looking to shoot back up to the top of the standings above another surging side in US Sassuolo. Napoli, themselves potential title challengers, were three points behind their visitors in an enticing clash.

The home side were set up in a 4-2-3-1 formation by manager Gennaro Gattuso. Alex Meret started in goal while Mario Rui, Kalidou Koulibaly, Kostas Manolas and Giovanni Di Lorenzo were the backline. Fabián Ruiz and Tiémoué Bakayoko formed the double pivot Two central midfielders next to each other. with the three of Hirving Lozano, Matteo Politano and Lorenzo Insigne in support of Dries Mertens.

Stefano Pioli’s men, led by Daniele Bonera on the sidelines in Pioli’s COVID-enforced absence, lined up in a 4-2-3-1 shape ensuring both sides matched up. Protecting the goal was Gianluigi Donnarumma. Davide Calabria, Simon Kjær, Alessio Romagnoli and Theo Hernandez were the four in defense. The two ahead of the backline were Ismaël Bennacer and Franck Kessié with Hakan Çalhanoğlu in a more advanced role. Zlatan Ibrahimović was the lone striker and had wingers, Ante Rebić and Alexis Saelemaekers, at his sides.

Positive signs for Milan are rewarded

Napoli pressed Milan out of a 4-4-2 shape as Politano stepped up alongside Mertens. Passes to double pivot were blocked off by the front line. The fullbacks would also be pressed by the wingers with an aim to force the play backwards to Donnarumma and subsequently force him to go long. One solution would be for Bennacer to drop deeper during buildup as Çalhanoğlu fell into his vacated slot. This helped negate the first line pressure.

The double pivot would sometimes attract a Napoli winger which opened up just enough room to find fullbacks moving into space. The fullbacks, especially down the left with Hernandez, helped bypass the press often. Milan could then find players behind the Napoli midfield line from the flanks. During buildup, Kessié also dropped to left back as Hernandez went up. Through the left came some of Milan’s best work and in the 20th minute, the goal was set up from there. The ball was worked well to the advancing Hernandez and he sent in a cross from deep. Ibrahimović attacked the ball, beat Koulibaly to it, and rifled a header from near the edge of the box past Meret. 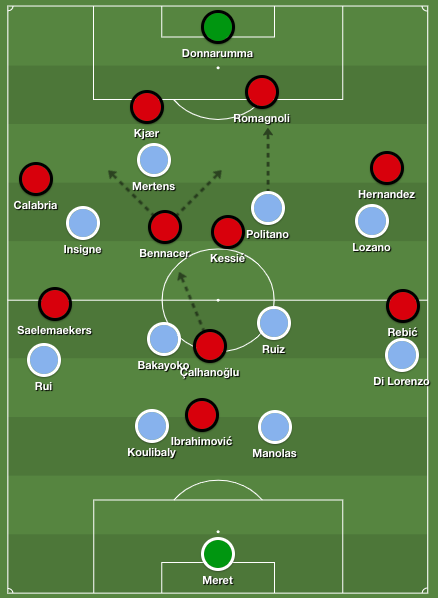 The scorer of the opening goal, Ibrahimović, was always a target for long and direct balls. The big man was not consistently finding teammates in aerial duels he won but he fared better when the ball was sent to his feet. He would regularly drop off, looking to draw a marker and open avenues for runners.

Milan defended using a 4-1-4-1 shape in their midblock. Çalhanoğlu jumped out to press a center-back, trying to get the ball played out to fullbacks who will be pressed immediately by wingers. Bennacer monitored Politano who looked to roam and receive between the lines. Napoli would frequently get the ball out to winger via the fullback but were unable to push forward from there. Milan managed to nick possession a few times as Napoli struggled to progress consistently. 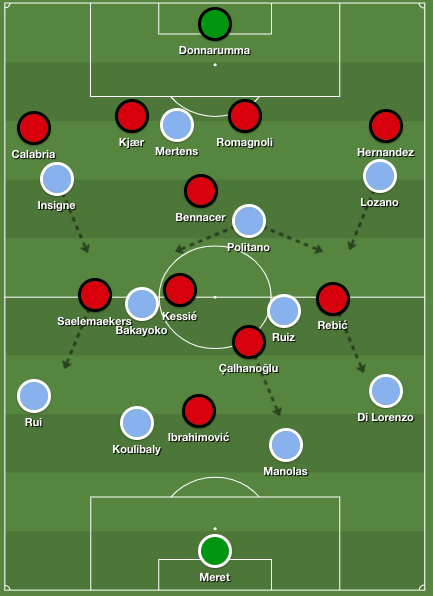 The common movements in the Milan press.

After conceding the opener, Napoli put some pressure to end the half. They managed to push Milan back and adequately populate the forward line. Finding Politano or Insigne moving from advanced or wide positions respectively, into the halfspaces,   If you divide the field in five vertical lanes, the halfspaces are the lanes that are not on the wing and not in the center. Because there is no touchline like on the wing, players have the freedom to go everywhere. But this zone often is not as well-defended as the very center. This makes it a very valuable offensive zone to play in and a lot of chances are created by passes or dribbles from the halfspace. was going to be important. There they could connect with the fullbacks and midfielders to help advance the ball. Forward players started to find a rhythm, connecting and exploiting their dynamic movement to create scoring opportunities. A 27th-minute scramble after a corner offered three great chances that all went to waste with one notably coming off the crossbar. Napoli could not find the equalizer by half-time but they looked to be on their way to doing so.

Much of the same in the second period

Napoli offered an interesting situational approach to Milan’s press in one instance out of the half. A huge midfield gap appeared as Bakayoko and Ruiz dropped while Politano moved into the attacking line. Koulibaly then ran from the center-back position into this chasm. Saelemaekers was then sucked in to mark him as Bennacer was drawn into the high press. This opened up the ball to Rui who could then advance. This dissuaded a too aggressive press, especially from Bennacer who would now monitor more carefully the space behind him. 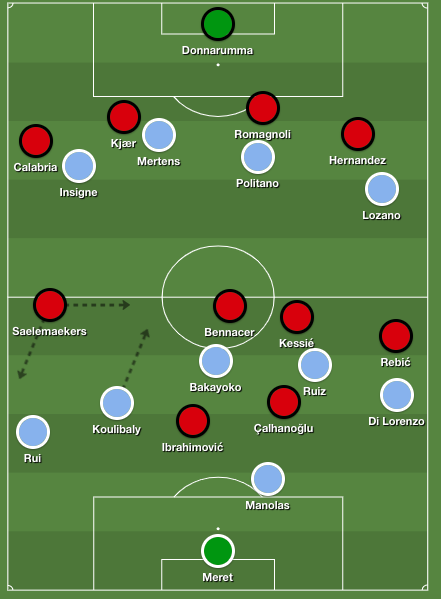 Napoli beating the press through the charge forward of Koulibaly.

Napoli certainly flowed through the halfspaces better than in the first half. Insigne and Lozano looked to receive there more, attracting the Milan fullbacks. Mertens or Politano could make the run into the channels. Or their same-side fullbacks could make runs into depth as they had the positional advantage over their Milan marker. A 54th-minute counterattack gave Milan their second. They managed to take advantage of Napoli’s suboptimal transition organization as Ruiz found himself in the right-back slot. After a turnover, the ball was quickly moved to Çalhanoğlu in midfield as Rebić burst forward. Ruiz, instead of tracking Rebić’s run, opted to try cut out the pass. Ruiz was unable to do so, with Çalhanoğlu’s through ball finding Rebić in behind. Rebić’s back-post cross was met by Ibrahimović, who was peeling off Koulibaly and kneed the ball in.

Piotr Zieliński was instantly brought on for Lozano with Politano moving out to the right. The new man was then involved in Napoli’s scoring effort. Strong play from him and Bakayoko saw Kessié dispossessed at the start of a potential Milan counterattack. This presented Napoli with a chance to attack once more. Zieliński grabbed the ball and fed Rui who then crossed to Mertens. The Napoli attacker placed past Donnarumma at the 63rd-minute mark even with Romagnoli in close proximity. Bakayoko’s 65th-minute red card slowed any potential effort for Napoli to storm back. Milan began eating away at the clock, oscillating well between periods of possession, threatening sporadically and defending deep. The introduction of the lumbering Andrea Petagna brought a different dimension to the Napoli approach. He managed to latch onto a ball over top in the 72nd minute but he was unable to finish.

He could also hold the ball up to a much greater effect than the more dynamic Mertens. They combined for a late attempt at an equalizer in the 93rd minute with Petagna swivelling by his marker to fashion an opportunity from a Mertens pass. Petagna could only hit his attempt at Donnarumma though. In the end, a very late Jens Petter Hauge goal, after a midfield turnover, sealed the game for Milan. 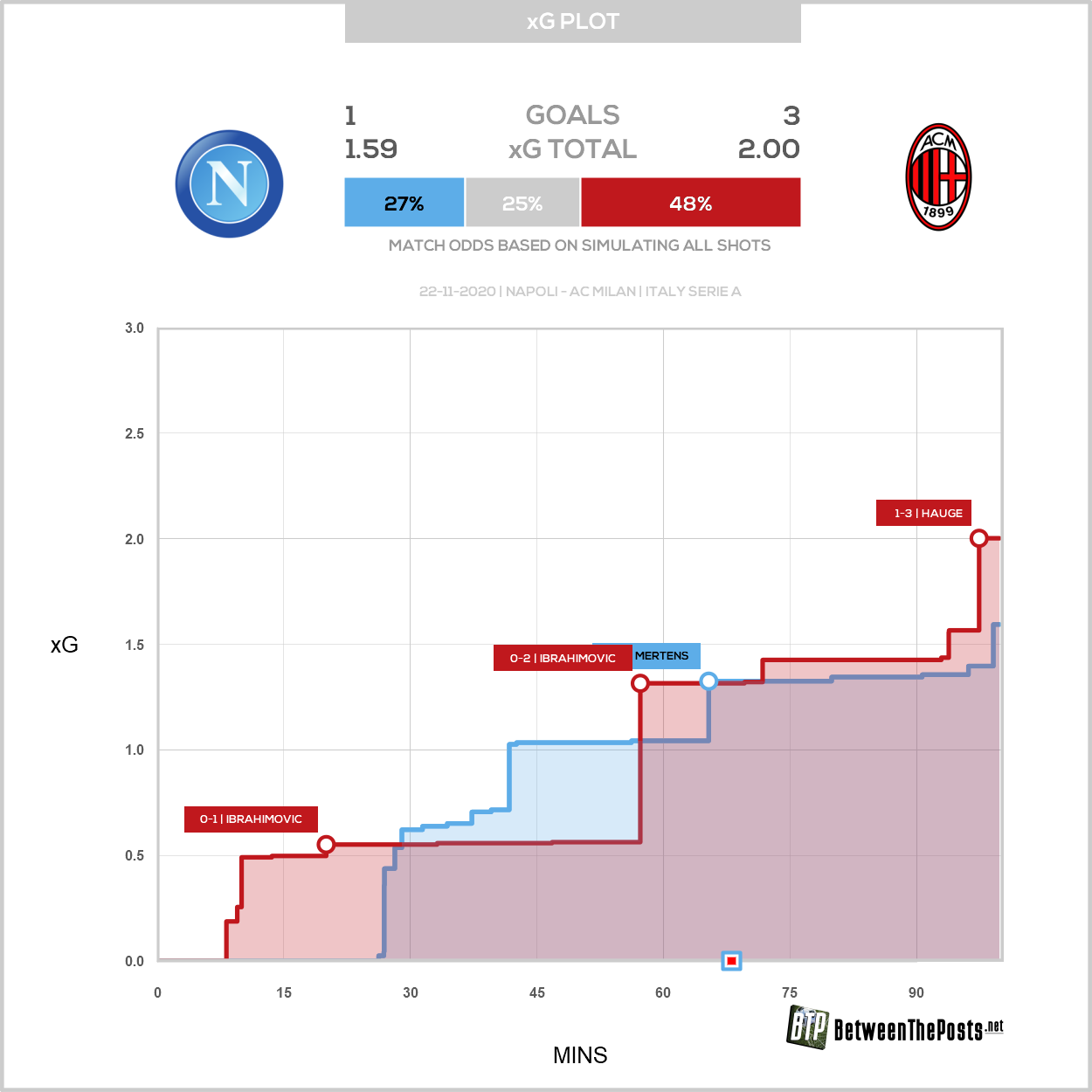 Milan continued to impress with a performance that showed both defensive and attacking quality. They pressed Napoli effectively and withstood their second-half quest for an equalizer while scoring twice themselves. The main difference was in the quality in the attacking third. Ibrahimović finished off a tough chance after sharp movement and displayed subtler movement to get on the end of a tap in. Napoli were left in first gear with their usual attacking efficacy not seen often in this game. UEFA Europa League duties are on the agenda for both sides. Napoli host Rijeka next, while Milan go away to Lille in their midweek contest. 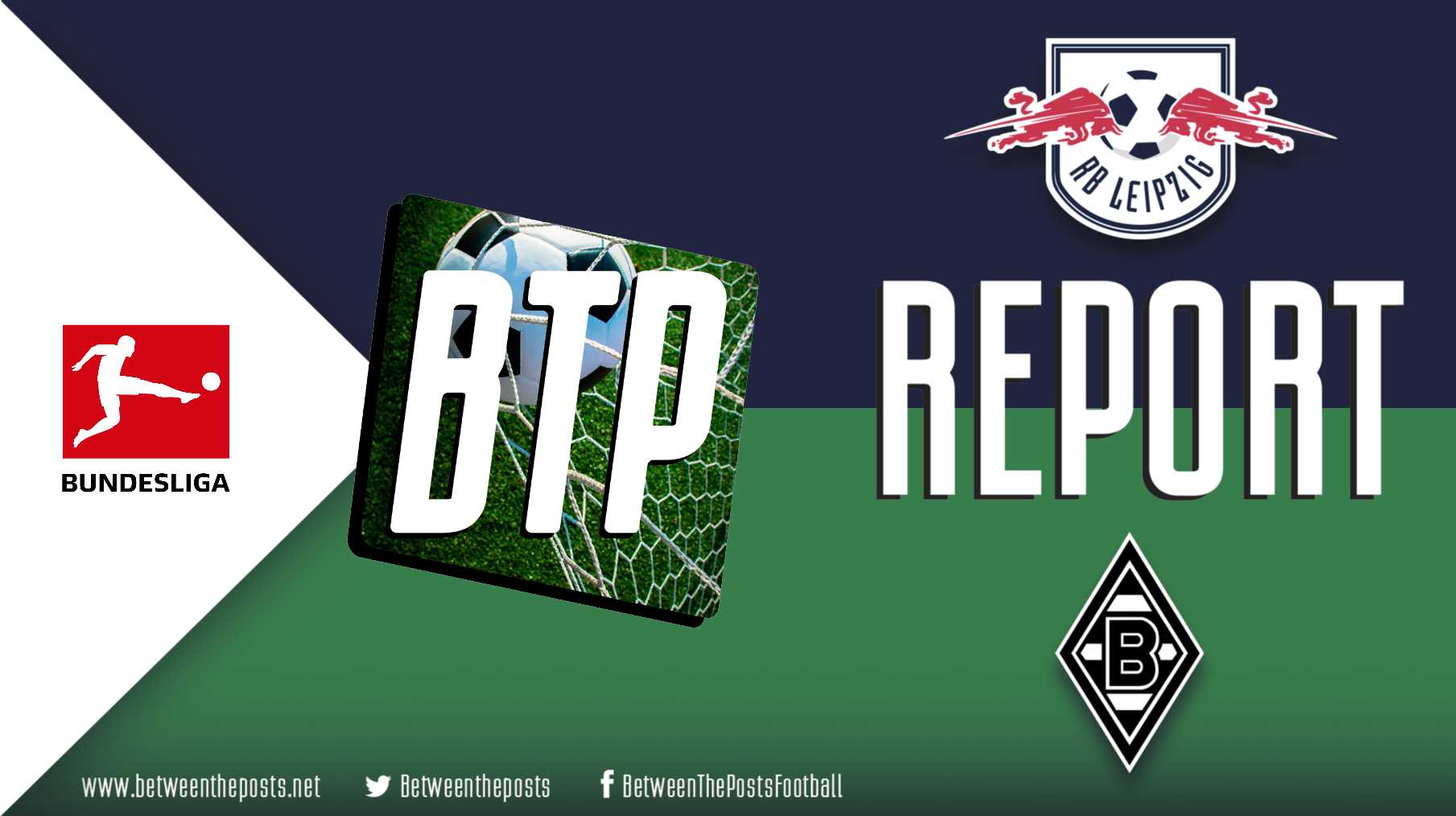 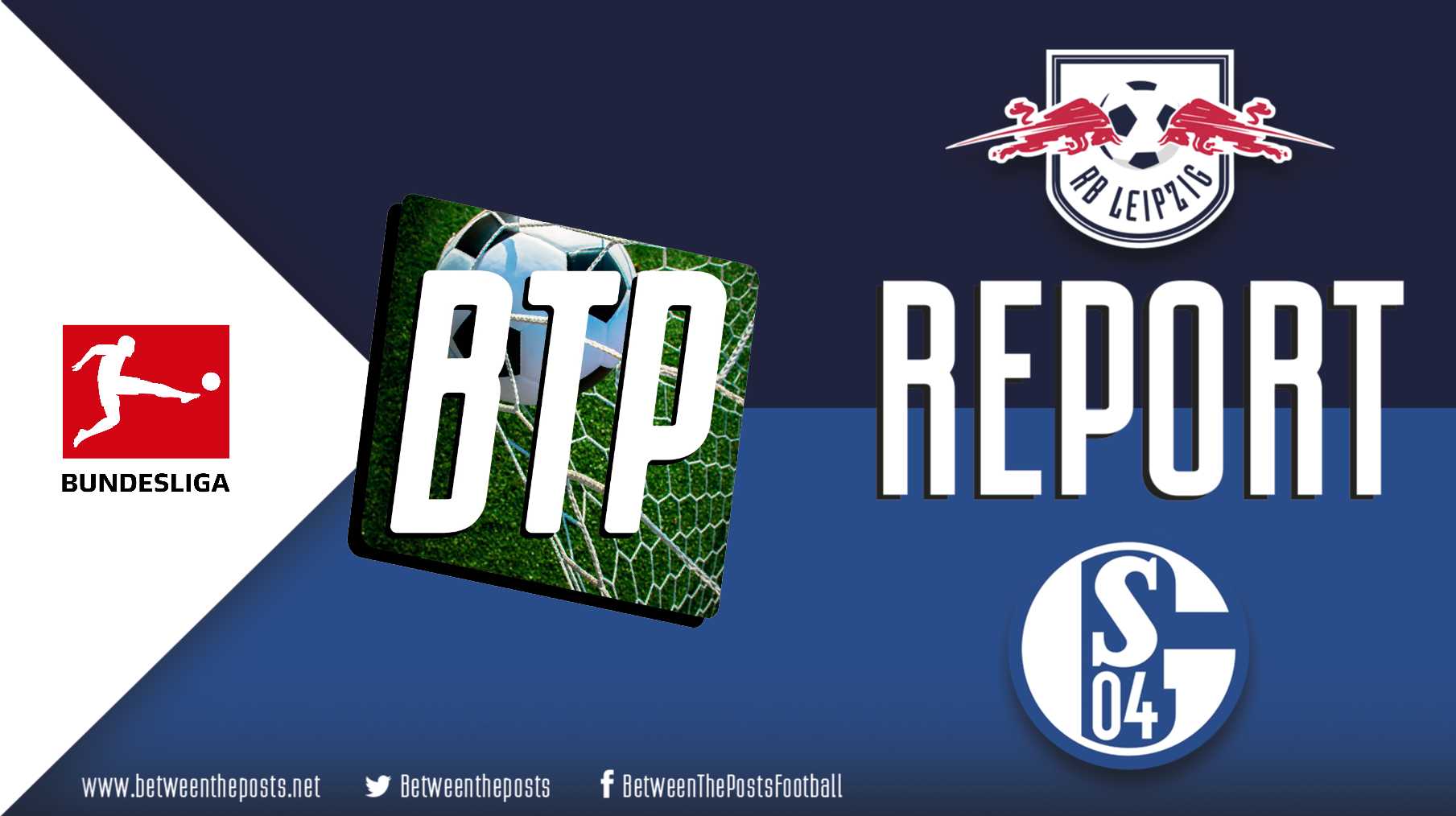