Napoli took a leaf out of Manchester City’s book and mostly outplayed Atalanta with a pass-and-press game. A dominant second half display from Napoli seemed to have sealed the game in their favor, but late controversy arose and Josip Iličić thought otherwise, restoring the game that appeared completely out of Atalanta’s reach to a draw.

Atalanta and Napoli faced off to determine the team most worthy of third place in Serie A. With a win, Ancelotti’s team would have caught up Atalanta on twenty points, whereas Atalanta could have stayed close to the top two, in what could be a surprising three horse title race.

Reality check and Atalanta’s trip to Napoli exposed some of the issues already displayed against Manchester City. However, a Napoli side with its own share of problems kept Gasperini’s team in the game for a draw, a result that perhaps does not fully represent the way the game evolved. Nonetheless, it gives a fair representation of the seasons both teams enjoyed so far.

While Atalanta has imposed itself amongst the best teams in Italy over the past year or two, Napoli have had issues with their consistency lately , losing points on the road to sides a team of their level is expected to beat.

For the occasion, Gasperini fielded an eleven almost at full strength, with only Duván Zapata absent due to injury. Ancelotti, on the other hand, played his strongest lineup, although Hirving Lozano’s striking partner remains up to debate: Dries Mertens or Arkadiusz Milik? Against Atalanta, the latter started and did not fail to repay his manager’s trust.

Napoli started aggressively with a man-oriented pressing that Atalanta struggled to play past, losing the ball to Napoli almost immediately after winning it back. If they did bypass the press ,Napoli retreated in a 4-4-2 shape that Atalanta would try to exploit by combining in tight spaces in and around the right halfspace. If you divide the field in five vertical lanes, the halfspaces are the lanes that are not on the wing and not in the center. Because there is no touchline like on the wing, players have the freedom to go everywhere. But this zone often is not as well-defended as the very center. This makes it a very valuable offensive zone to play in and a lot of chances are created by passes or dribbles from the halfspace. Particularly Alejandro Gómez, the offensive orchestrator, and Josip Iličić featured here.

From a 3-4-2-1 shape, Napoli manipulated their opponent’s man-marking to progress the ball. In defense, Luperto stayed deep, forming a back three, whereas Giovanni Di Lorenzo moved higher to act as a wing-back. Atalanta responded to Napoli’s attacking formation with Mario Pašalić and Josip Iličić pressing Kalidou Koulibaly and Nikola Maksimović while Gómez and Remo Freuler marked Piotr Zieliński and Fabián respectively.

José Callejón and Lorenzo Insigne stayed tight to enter the half-backs’ control and would make dropping movements to draw the defenders out, freeing space behind. An example of this situation consisted of Callejon’s blind-side If a defender looks one way, an attacker can try to make a run behind the defender’s back, on the side where he is not looking. This is called the blind side. runs. When Insigne received near the midfield line and drew his marker out of position, the Spanish winger had the chance to attack the free space diagonally, a move that has become so common, at times even predictable over the years, yet so hard to counter.

Napoli’s attackers were quite fluid throughout the game though, which meant that Insigne and Lozano could switch positions frequently, in addition to Fabián drifting wide occasionally. Even Milik could drift wide if the opportunity to receive the ball and create a possible advantage arose. On the right, when Giovanni di Lorenzo stayed deeper, Callejón would occupy the wing instead. Inevitably, the constant movement led to favorable situations for Napoli, especially on the left side. Since Insigne and Lozano usually pinned the defenders, the left half-back, Sebastiano Luperto, had the chance to carry the ball forward. Consequently, Remo Freuler was forced to step out wide, and if Pašalić didn’t drop back in support, Atalanta would open space in the center or ball-far halfspace. 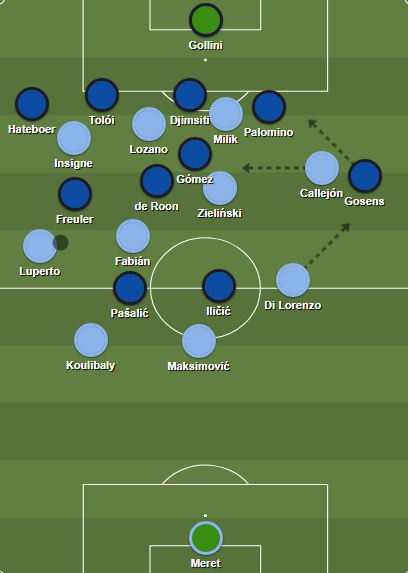 Atalanta come out of their shell

In the fifteenth minute, Napoli’s lead came. After a corner left Callejón free on the right wing, the winger was able to cross the ball precisely into Maksimović’s header in the middle of the box, following some smart runs towards the ball that freed the center-back.

Napoli’s pressing intensity died down as the minutes progressed, and eventually the two strikers stopped disturbing the opposition’s buildup once the possession left the center-backs’ area, leaving the rest of the team to defend with eight men. Still, Atalanta failed to find ways to create chances or enter the penalty area.

A flaw that inevitably inhibited Atalanta’s incisiveness was the lack of occupation of space between the lines. When one of the Atalanta midfielders had the ball, systematically, the closest of Napoli’s pivots stepped out, opening space behind him that Atalanta were not able to exploit either because of poor positioning or slow ball circulation. Moreover, Napoli’s pivots’ adventurous positions in possession probably could have been exploited better on the counter, a game situation Atalanta started using as a vehicle to create chances only near the end of the first half.

Unsurprisingly, Atalanta’s equalizer originated from one of the few attacks in which Iličić occupied the space between Zieliński and Fabián. By dropping between the pivots, the Slovenian also attracted Koulibaly with him, opening space behind the defender for Freuler’s run. 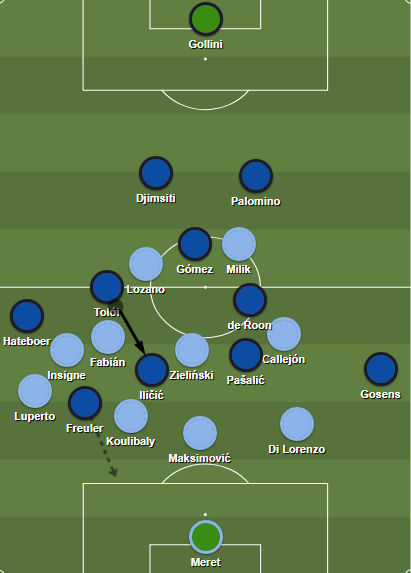 The buildup to Freuler’s goal.

The beginning of the end

The beginning of the second half followed a similar wavelength to the ending of the first. With the pivots’ runs becoming increasingly bolder – especially Zieliński’s, who would move forward from the early stages of buildup – Atalanta could find more chances on the break. However, when Napoli bypassed Atalanta’s press they would establish themselves quite efficiently in the opposition box. Through their positioning, they created consistent defensive headaches for the opposition whilst maintaining an organized structure to counterpress. After losing possession, a team immediately moves towards the ball as a unit to regain possession, or at least slow down the pace of the counterattack.

To improve Napoli’s attacking proficiency – who had seen better days, especially due to uninvolvement on the ball from Lozano and Milik – Ancelotti subbed in Mertens for the Mexican attacker. Shortly after stepping onto the field, Mertens linked up with Insigne in a one-two combination to create a chance on goal for the Italian.

Probably unhappy about his performance and how he dealt with his defensive companions being manipulated, Gasperini responded to the Napoli coach’s substitution by replacing Berat Djimsiti with Simon Kjær. Napoli’s assault did not cease, though, and the quick passing and opposite movements, reminiscent of Manchester City’s in their demolishment of Atalanta, pinned the visitors deep in a way that completely restrained them from action. Milik’s goal to put Napoli into the lead once again in the seventieth minute came as all but a surprise, amidst a storming charge that nullified each and every one of Atalanta’s solutions.

The game looked done and dusted, after Napoli had imposed their supremacy and turned down every one of Atalanta’s attacks. A sequence of events occurred as Napoli went for their final rush, though, accurately capturing the randomness football frequently falls to.

When Kjaer accidentally knocked Milik down in the penalty area while attempting to defend a cross, everyone thought the game was close to being over. However, a referee decision that caused controversy in the aftermath allowed the play to go on, giving Atalanta the chance they cried for on the counter to equalize just moments later. Through a similar pattern to the first goal,Toloi assisted Iličić behind the defense, sending his teammate on a one-versus-one against the goalkeeper he could not miss. 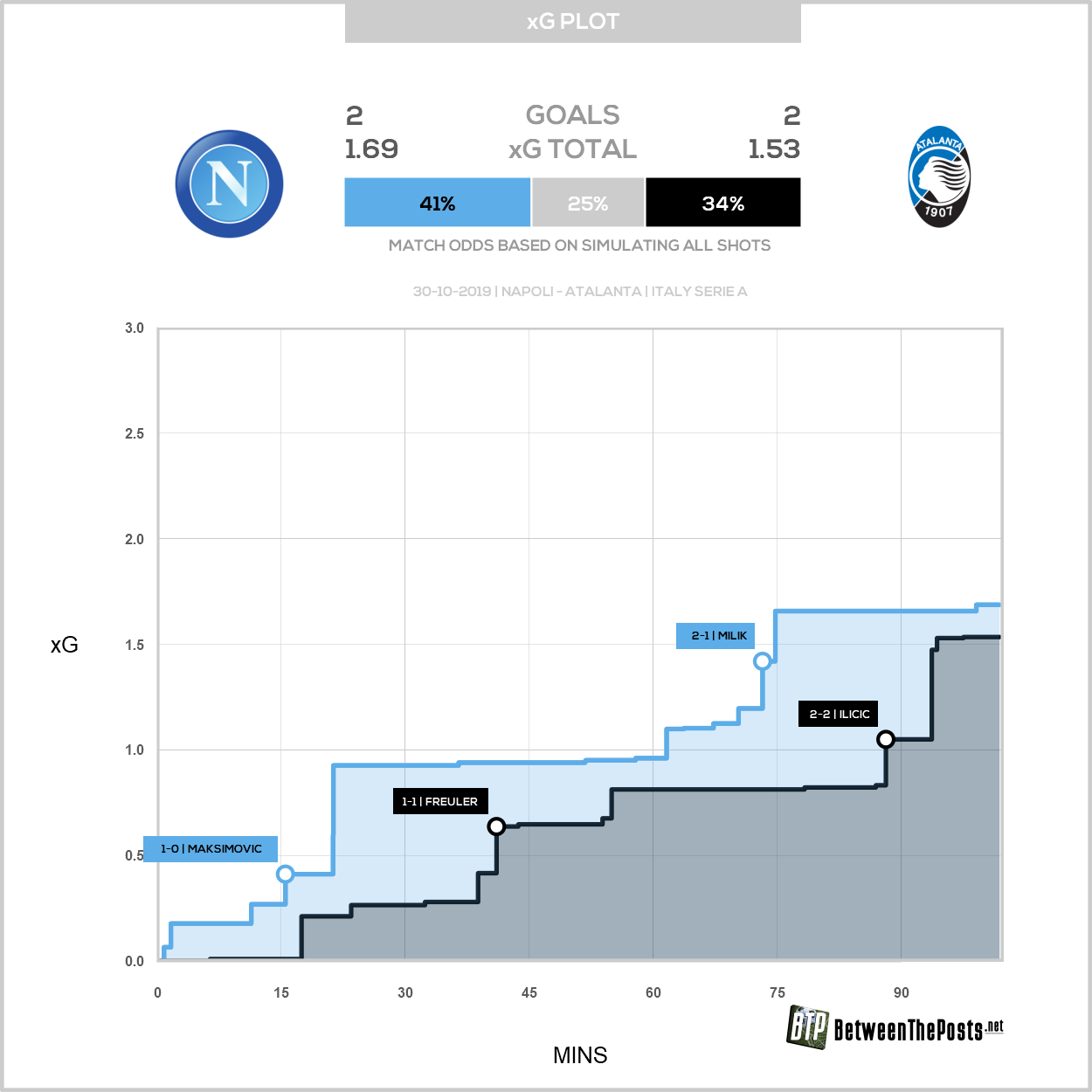 Napoli needed a flawless performance in every phase to achieve the difficult task of defeating Gasperini’s mighty Atalanta. If during the first half Atalanta and Napoli both had their moments of supremacy over one another, Napoli’s dominance after the break is undeniable. Ancelotti’s men combined an efficient possession to aggressive counterpressing and pressing to cancel out every initiative from the visitors. Only defensive mistakes kept Atalanta in the game, eventually costing Napoli a win that would have taken them on the same amount of points as their opponents. Either way, performing at such a high level against one of Serie A’s most organized teams is a strong statement to the rest of the league.

Atalanta, on the other hand, seem to have found their nemesis in quick, fluid passing and high intensity with the ball throughout the entire game. Ironically, what was once Gasperini’s men’s strong point, unequaled by any Serie A team, is now becoming used against them to expose their individual defensive limitations. For the umpteenth time, though, Atalanta have proved their value by avoiding a loss – in spite of all difficulties – against a Napoli team required to show improvements from their previous regime, either in Serie A or in Europe. 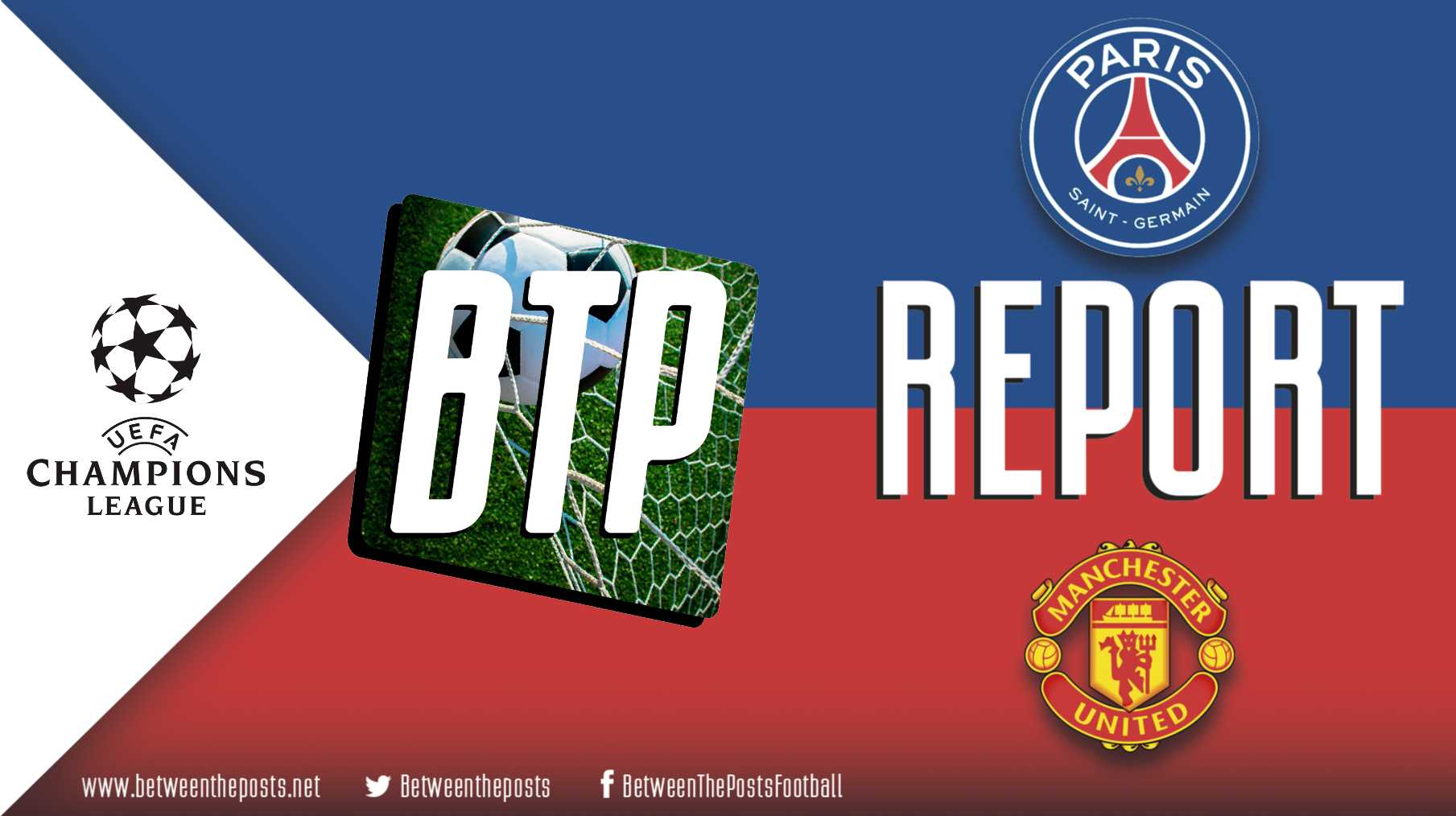