Four years on from Fiorentina executing Napoli’s Scudetto dreams, they may have just done it again. Napoli failed to capitalize on early momentum, and structural issues off the ball paved the way for their opponents to provide a crushing blow, in the race for the Serie A title.

After they clipped the heels of the champions, Fiorentina had another opportunity to add further frustration, away from home, against chasers Napoli. Prior to this game, only a single point separated the top three of Serie A, with European places still up for grabs below them.

Luciano Spalletti’s team have struggled to assert dominance in their games, as of late, but they had continued to pick up steam, despite the defeat to fellow chasers Milan. Atalanta’s press and wide combinations caused Napoli problems in the previous round, but counterattacks and occasional glimpses put crucial points on the board.

Having fallen victim to a bonkers 5-2 Coppa Italia defeat in January, Napoli knew Fiorentina had the potential to cause great damage to their title hopes. Fiorentina themselves are on the run for a European spot, a team whose offensive efficiency had taken a hit, but a defense that hasn’t allowed the opposition to take many shots.

Napoli was without André-Frank Zambo Anguissa due to suspension, whilst Giovanni Di Lorenzo was injured. However, Victor Osimhen did return to start up front. He replaced Dries Mertens, whilst Juan Jesus was replaced by Amir Rrahmani and Fabián Ruiz came back into the midfield.

Still without Giacomo Bonaventura, Fiorentina also had a big suspension in the midfield, as Lucas Torreira was unavailable. Sofyan Amrabat came in, Vincenzo Italiano’s only change in the 4-3-3 system, from their 1-0 win over Empoli.

Possession may have been evenly distributed, but Napoli established early momentum by finding routes forward down the left. Spalletti’s team built in a mixture of their usual 4-3-3 and the 4-2-3-1 formations, as Stanislav Lobotka and Ruiz formed a double pivot on the occasion. Nevertheless, the short passing combinations and use of three-man combinations retained the ball effectively when Napoli built from the back.

Two distinct details led to early Napoli success: firstly, the length of passes drastically increased from midfield to attack, as the hosts opted to go a lot more direct behind the Fiorentina backline. Secondly, Lorenzo Insigne and Matteo Politano were glued to the touchlines, when Napoli aimed these longer passes from deeper positions. This led to Fiorentina’s backline being more scattered and having to cover larger distances, combined with a midfield that was heavily attracted to the Napoli trio’s circulation. This led to a few moments where Lobotka jumped through the counterpressure, as well as Nikola Milenković coming out of the backline to confront Piotr Zieliński.

Down the left, Insigne drifted into a more central position closer to the penalty area, ideal for Mário Rui to make late runs from left-back and put more pressure on Lorenzo Venuti, as Nicolás González was not so strict on following his runs. 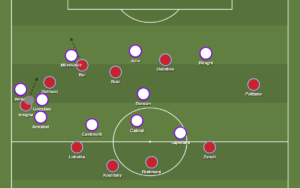 11th minute: Three-man combination opened up Fiorentina. Rui’s pass to Zieliński, whose carry dragged Amrabat towards the touchline and created space for Rui’s underlapping run. Insigne found the left-back with a direct pass down the channel.

A Rui run created two great openings in the first twelve minutes. The first came after Napoli won the ball back in the middle third, after a direct pass out left. Ruiz switched play as Insigne had drifted infield and González reacted late to Rui running into space. Though the box opened up, Venuti was in a position to intervene.

The second opportunity was a lot more dangerous, as Napoli combined with a fabulous three-man combination, as Insigne was left free and deep to chip the ball back into Rui’s underlapping run. Ruiz found the ball in acres of space in the box, but a loose pass towards Zieliński broke down the move.

Napoli had the offensive threat in the opening quarter and could shift the dynamic between direct longer passes down the left and classic Insigne halfspace play. The hosts did have the ball in the back of the net, as a great Ruiz dribble led to Zieliński’s driven pass across goal into Osimhen, but the striker mistimed his run. Although Napoli had the mechanics to get the ball forward, turning these moments into shots, once Fiorentina had regrouped in their medium block, could not be done without a monumental dribbling effort. The hosts had started well, but the cracks were already showing.

After being on the back foot early on, Fiorentina slowed down Napoli’s directness and would turn the game more towards their control. Though building in a similar shape, the rotations were different when Fiorentina passed the ball. Both Amrabat and Gaetano Castrovilli would move closer to the center-backs, whilst Alfred Duncan pushed further ahead to support Arthur Cabral when the ball would progress centrally.

Fiorentina had great success against a Napoli press that was more fragmented. The hosts pressed in a 4-2-4 formation, which would also see Ruiz step up to confront either Amrabat or Castrovilli, without the Napoli players strict on their coverage. As a result, Lobotka was left isolated against Duncan and Cabral, which would result in Rrahmani coming out of the defensive line.

These patterns emerged a couple of times before the half-hour mark, one that led to Cabral’s shot being blocked, but the other had grave consequences for the hosts. Napoli players surge towards the frontline left Pietro Terracciano free to pass to Duncan, who dropped a little deeper and wall pass available from Duncan into Cabral’s vertical run. Fiorentina was quick to overload on the left, and although Cristiano Biraghi’s cross didn’t connect, Napoli had not recovered in the second phase. The ball was flicked to González, whose effort cracked off the inside of the post and into the net. 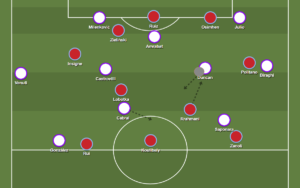 28th minute: Buildup to Fiorentina’s first goal. Ruiz’s high positioning enabled Terracciano to pass into Duncan from the backline. Duncan was able to draw out Rrahmani, which opened a lot more space for Cabral to move into a create the transition forward.

The hosts almost responded a few moments later, as another direct ball caused Venuti problems, and Rui drove the ball just over the bar, as the goalkeeper dropped to the floor too quickly. Nevertheless, Fiorentina provided the squeeze on Napoli and controlled more of the possession as the first half continued.

Italiano’s team had stable circulation across the back but could flip the switch once they broke the lines, between Napoli’s midfield and defense. With Amrabat and Castrovilli supporting deep, Biraghi and Venuti overlapped the narrow wingers and Fiorentina could make a five-player wave, on the Napoli backline.

As well as direct combinations through the lines, a long ball crossfield towards González was also a safe route to get the ball up the field. Fiorentina had a shaky start to the match but ended the first period with a deserved lead.

Spalletti’s first change saw Politano replaced by Hirving Lozano, at the start of the break. Though this didn’t provide too much difference on the right, Napoli began the half with a lot more control of the ball and more fixed positioning of the midfielders. 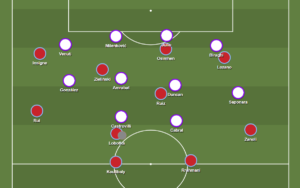 A common set-up for Napoli, when they entered the opposition half, at the start of the second half. 4-2-4 formation, which did not enable much progression between the lines.

Lobotka now moved more between the two center-backs in the buildup, only able to push up when Ruiz dropped out of the right, closer to Rrahmani. Though they had more of the possession, turning this into quality shots was difficult, as Fiorentina were more disciplined in their 4-4-2 medium block and able to maintain its shape more effectively than Napoli. Enter Dries Mertens.

The Belgian replaced Ruiz, which saw Zieliński drop next to Lobotka. Now Osimhen was properly supported between the lines, and Napoli had a forward who was free to come out of pinning the center-backs to create a passing lane. Within seconds of coming on, Mertens showcased his value by lurking behind Amrabat to combine with both Lobotka and Kalidou Koulibaly to get the ball behind Fiorentina’s midfield line.

A few moments later, Napoli equalized. As a Fiorentina transition broke down, Insigne was left in a lot of space without the opposition blocks set. Osimhen made a darting run between the center-backs to open the field and held the ball long enough for Mertens to arrive at the edge of the box. A smooth finish into the bottom corner put Napoli back in the game.

Napoli appeared to have built momentum, but Italiano could deploy super substitutions of his own. Riccardo Saponara and Duncan were replaced by Jonathan Ikoné and Youssef Maleh, who reinforced their options down the left side of the attack.

Within moments, Fiorentina combined with one of their more effective triggers seen in the first half. The long switch towards González showcased Rui’s issues in these phases and the long ball from the goalkeeper put González behind the fullback. With Napoli’s defensive line tilted, Ikoné was free at the back post to take the ball down and drive the ball into the bottom far corner. 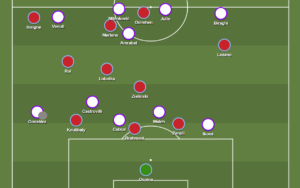 65th minute: Buildup to the second Fiorentina goal, highlighted a major issue for Napoli throughout the game. It was so easy for Italiano’s team to put pressure on the defensive line with five players when buildup or direct ball turned into semi-transitional play.

Fiorentina continued to create danger via the long switch out wide, followed by them flooding players between the lines. Though Napoli provided one or two passes down the left side that caused concern, one which even saw Lozano put the ball in the net from an offside position, the hosts were disconnected and too open behind the forward line to stop the opposition threat.

Just six minutes after they had regained their lead, Fiorentina banked a third. Rrahmani carried the ball into Fiorentina bodies, a platform built for the counterattack. Maleh fed the ball into Arthur Cabral, isolated on the left with Lobotka. A touchback across his body left Lobotka for dead and Cabral curled the ball in with excellent style.

From this point onwards, both teams exchanged in their aforementioned patterns, with so much of the sting taken out of the match. Napoli was able to offer another punch, as a Rui long ball was plucked out of the sky from Osimhen, and smashed in on the half-volley. An excellent goal with six minutes left, but Napoli failed to offer anything but desperate crosses into the box, in hopes to grasp anything out of the match. A significant blow to their title hopes.

Napoli can truly flex their muscles when they control the ball, but off it, they can be left so open. Fiorentina was able to create a lot of three-versus-two’s and ultimately opened up Napoli’s backline once they were isolated. It’s a crushing result, as both Milan clubs have the opportunity to extend their leads on Spalletti’s team.

Fiorentina was the deserved winner, as their impressive run against the big clubs continues. With a game in hand on both Roman clubs, Italiano’s team can join the mix for Europa and Conference League places. It’s Italiano’s work that deserves a lot of recognition, having taken an unidentifiable club and turning them into a dynamic and interesting team to watch. 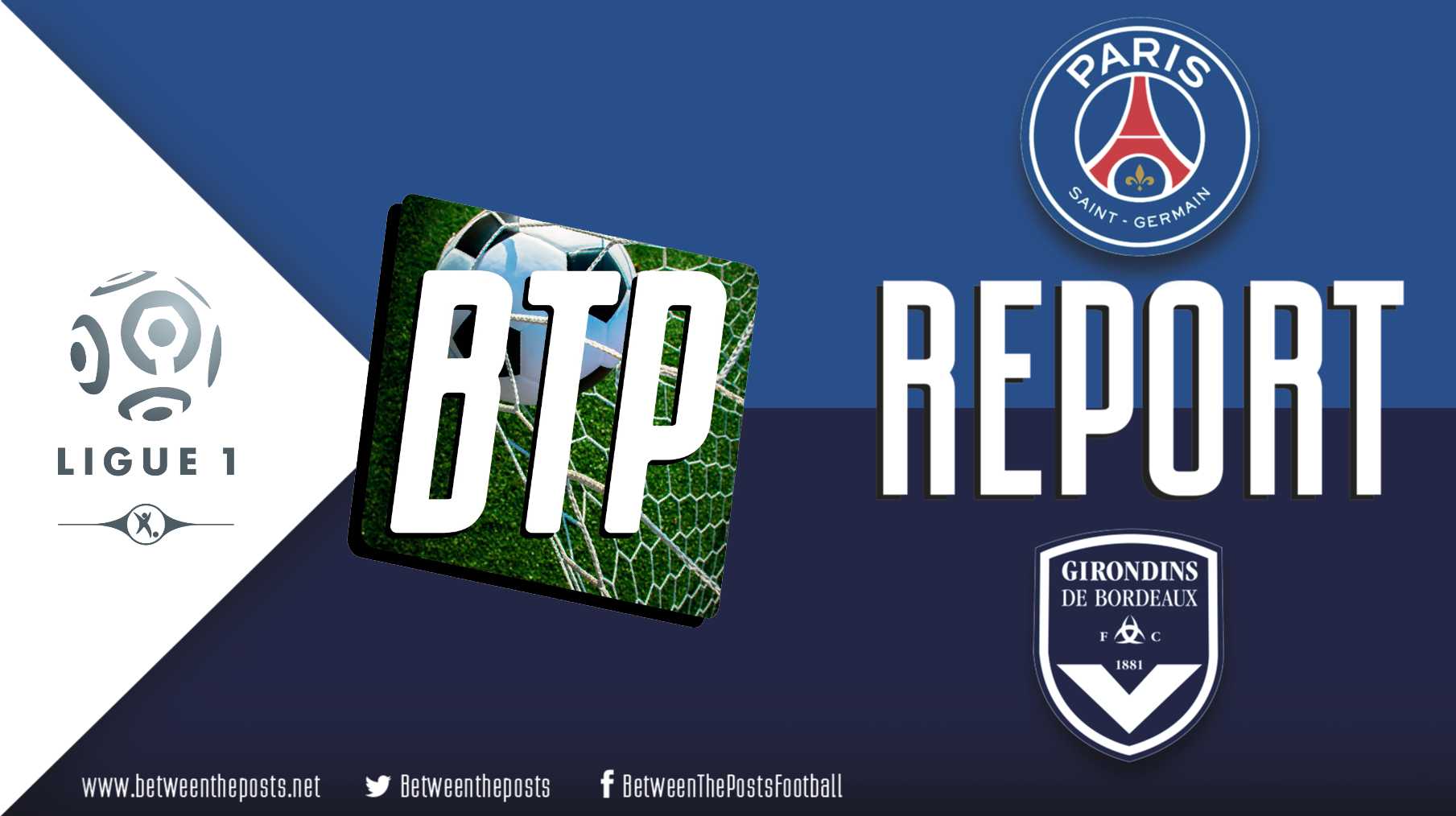 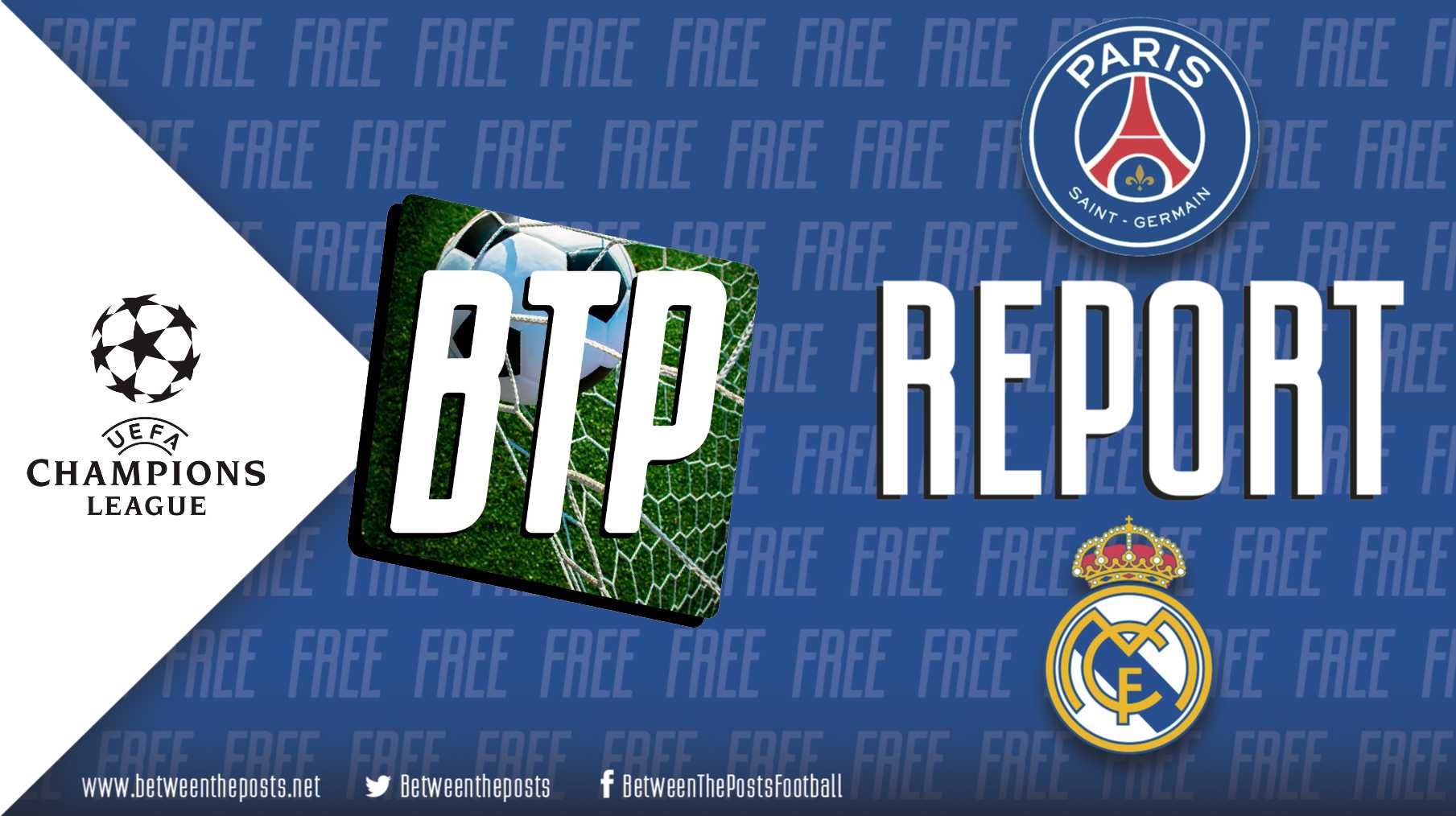