Napoli harnessed its recipe to cook Juventus alive. Where space opens, Napoli will target and Spalletti’s team produced an incredible performance that defined just what makes this team so good.

Friday the 13th brings misfortune to those superstitious in the western world, a date on which Napoli would face its biggest hoodoo. They have finished runner-up of Serie A four times in the last decade, those in black-and-white victors in every single year.

With the league near its halfway point, they met at an interesting time. Napoli had stormed into a seven-point lead, boasting the most goals in the division, whereas Juventus quietly manoeuvred up the league to go into this game in second place.

Their quiet rise under Massimiliano Allegri has followed thanks to a classic case of “Juve-ing”, 1-0 wins, with little to shout about in their style. Allegri has built a foundation through newer recruits, with the main stars being unavailable up to this point. However, this all comes at a truly phenomenal period of Juventus’ history: with all of their board resigning as events in Qatar were beginning to unfold and the club’s reportings of finances under intense scrutiny.

Napoli faced potential disruption after their defeat at Internazionale. Away to an emotional and charged Sampdoria crowd, Luciano Spalletti’s team produced a mature performance to bypass high pressure and produce their versatility down the channels. Important momentum needed for such an important clash. The only change from that game came at the heart of the defense, Juan Jesus was replaced by Amir Rrahmani at center-back, with Napoli in their usual 4-3-3 system.

Allegri made three rotations to the team that beat Udinese. Federico Chiesa made his first start in over a year on the right wing, whereas Bremer and Arkadiusz Milik came into the 3-5-1-1 structure.

Adjustments to play into the space

Quotes from Spalletti have perked the ears of analysts alike, but one has truly stood out: “Systems no longer exist in football, it’s all about the spaces left by the opposition.” The first line sparks debate, but the second truly hounds in what has made this Napoli team so special to watch. Flexibility is a deadly tool and when Juventus sat compactly in a 5-3-2 shape, Napoli worked the ball into available spaces to avoid playing into problems.

When the ball was circulated around the halfway line, Stanislav Lobotka dropped between the center-backs and they were able to move a touch wider to provide the fullbacks with more support. With Milik and Ángel Di María in a flat front line, Napoli kept the ball in deep wide spaces and had security in this area. 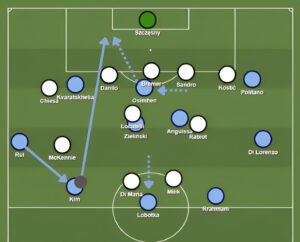 12th minute: Example of how Napoli found Osimhen inside the box. Lobotka moved between center-backs to stretch, which created an overload on the pressing center-midfielder. Osimhen’s double movement constantly got him ball side.

Fullbacks Giovanni Di Lorenzo and Mário Rui were key in supporting the attackers: Di Lorenzo was more aggressive, inside of Matteo Politano, which allowed Frank Anguissa to roam around Adrien Rabiot. Rui was more conservative and wider but his position kept Khvicha Kvaratskhelia from being doubled up and Piotr Zieliński demanded the ball to his feet, which kept the Juventus midfield high.

This geared Napoli for one move that defined the game, the quick, direct ball into Victor Osimhen. Not many strikers occupy as many center-backs as Osimhen does and the spaces around Juve were prowled upon by the masked one. Fourteen minutes in, this came into effect. Kvaratskhelia cut inside and the ball funnelled towards the right. The Georgian’s scissor kick was saved by Wojciech Szczęsny, but perfect for Osimhen to nod the ball past him from close range.

Following the goal, Juventus began to play more aggressively but Napoli recognised the importance of switching. When Lobotka carried the ball past the first line of pressure, it was met by Juve attempting to reshape and a higher position from Chiesa had Kvaratskhelia in more space on the diagonal.

A Juve period, failed to be exploited

A skewed miss pass from Rrahmani almost reshaped the rest of the first period. Di María’s shot was still from a distance, but hitting the very corner of the crossbar served as an important reminder of Juventus’ strength in individuals. They began to counterpress more aggressively, defined by Rabiot leaving Anguissa to engage with Di Lorenzo and Chiesa much higher up, even when the ball was on the far side.

This led to more breakage in Napoli’s passing sequences, without being able to properly pin Juventus during this stage. Despite more efficiency off the ball, their pressing was still suboptimal with distances between the wide center-midfielder and Napoli fullback too large to directly win the ball higher up the field. 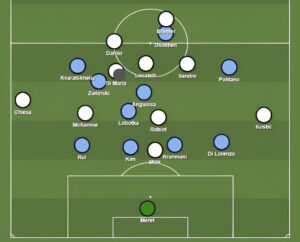 27th minute: Juventus’ 3-5-1-1 shape, on the ball. Heavily reliant on the roaming work of Di María to make progression.

Nevertheless, Juventus had possession spells of their own, a roaming Di María the connective tissue in a dysfunctional Juve body. It prompted Rabiot and McKennie to move higher up, but progression solely came through the Argentine moving to make things happen. Milik profited from Napoli center-backs dropping very deep to connect through a couple of crosses/long balls, but Juventus were attacking their opponents with blunt instruments.

Napoli’s structureless mannerisms can also be reflected off the ball at periods but in the best possible conduct. The team is quick to reshape if they lose the ball in its midfield, Anguissa can press higher than his fellow midfielders, but Napoli can reshape into 4-4-1-1/4-1-4-1 or 4-1-2-3 formations and the midfield will still keep its compactness. Additionally, winning a foul up the field provided an important reset in possession – Juventus still moved higher but Napoli still worked the ball into open areas.

Juve’s defense was still intact at this point but began to fall to certain triggers. With the defensive line higher, Alex Sandro was more engaged with Anguissa and Filip Kostić provided less pressure on Politano. The ball funnelled more towards Politano, who is less dynamic than some of Napoli’s eleven but has a distinct pass that sets up Osimhen. Hugging the touchline, a quick curling ball, on the turn with his left foot, was the trigger for a vertical Osimhen and Bremer could only be dragged into the ride.

This started to creep in more and more, only time before Napoli could double their tally. As the ball was worked back towards the center-backs, Juve stepped up but the Politano pocket was still open. Politano produced a high ball, a nightmare for an isolated Bremer to deal with and against Osimhen. A two-versus-two was created and with Danilo forced to cover, Kvaratskhelia aligned himself perfectly for a side-footed finish. 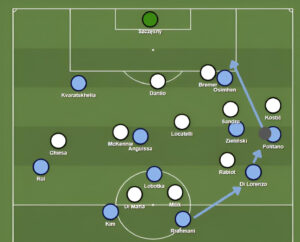 39th minute: Buildup to Napoli’s second goal. The ball is worked back to defense and onto the right side. Not enough pressure on Politano meant that he can produce his trademark pass into Osimhen to create a two-versus-two around the box.

Before half-time, the Juve body produced a muscle spasm to pull a goal back. Di María opened the chance once again, banked off Manuel Locatelli who had moved into the box and the random Napoli touches on the ball that could not be controlled. Lobotka’s tackle to Zieliński’s attempt at intercepting went through the legs of Min-Jae Kim and to his Polish teammate Milik, unfortunately for Zieliński, this wasn’t when he was wearing red and white. Di María bagged to keep the action poised.

Allegri was right to rotate from the 5-3-2 formation at halftime, considering the matchups that were partaking against Napoli’s frontline. No substitute was made, but Chiesa swapped flanks and Kostić dropped as the left back. McKennie was responsible for the right winger spot and off the ball, Juventus were in a 4-4-2 formation. From the start of the second half, the dynamics continued with less settled possession for the hosts but with the ability to still hold onto the ball.

Kvaratskhelia kicked things off in audacious fashion, a nutmeg on Danilo, just ten seconds into the second period. Napoli attacks started deeper but against a reactive Juve midfield, it left with more space opening for the likes of Osimhen, Kvaratskhelia and substitute Eljif Elmas who was much narrower than Politano past the halfway line.

A long channel ball from Rrahmani put Osimhen behind Kostić and isolated Alex Sandro. The goalkeeper pushed the ball around the post, but the resulting corner saw an excellent half-volley from Rrahmani, executed from just around the penalty spot. Such long passes from Rrahmani were a good avenue for Napoli to start attacks, as Kostić had the dilemma of Elmas being narrow and Di Lorenzo pushing up on the outside, with Chiesa not strictly following his man. 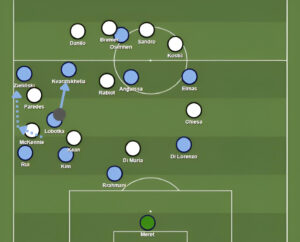 66th minute: Type of movement that helped Kvaratskhelia receive the ball in space. Zieliński had dropped to receive the ball at his feet, but his movement on the outside dragged Paredes and left Rabiot isolated.

But it was the left side that truly got Napoli up the field, especially in the transition. Kvaratskhelia always had the space to ramp up the tempo, and even if Danilo or Bremer could take the ball out of his feet, they had retreated so far that they had no way of restarting. Pressure from Rui forced Bremer to pass straight at his feet and the ball ricocheted to the Georgian, just on the corner of the box. An incredible delivery was perfect for Osimhen, with two defenders on his heels, but no way in stopping the striker from thundering home the fourth goal.

The aforementioned Kostić problems arose again soon after. Juve’s midfield had no organization in covering for one another and it enabled both Napoli fullbacks, Mathías Olivera this time on the left, to combine centrally. Kostić was about to press Di Lorenzo before he noticed Elmas free on the outside. Elmas cut inside his man and his deflected shot concluded a truly outstanding performance.

A monumental moment in recent Calcio history. Two winners in the past two years have not changed the fact that a decade of Juventus glory still has an influence, but how that influence is fading. Juventus is still third, before the weekend’s kickoffs, but miles behind the synergy and power that Napoli possesses.

This is a special squad that Spalletti has assembled, structure-free but connective-heavy. Spalletti has produced great servings in Europe and away from home, but this is his finest dish to date. Can Napoli sustain such momentum? 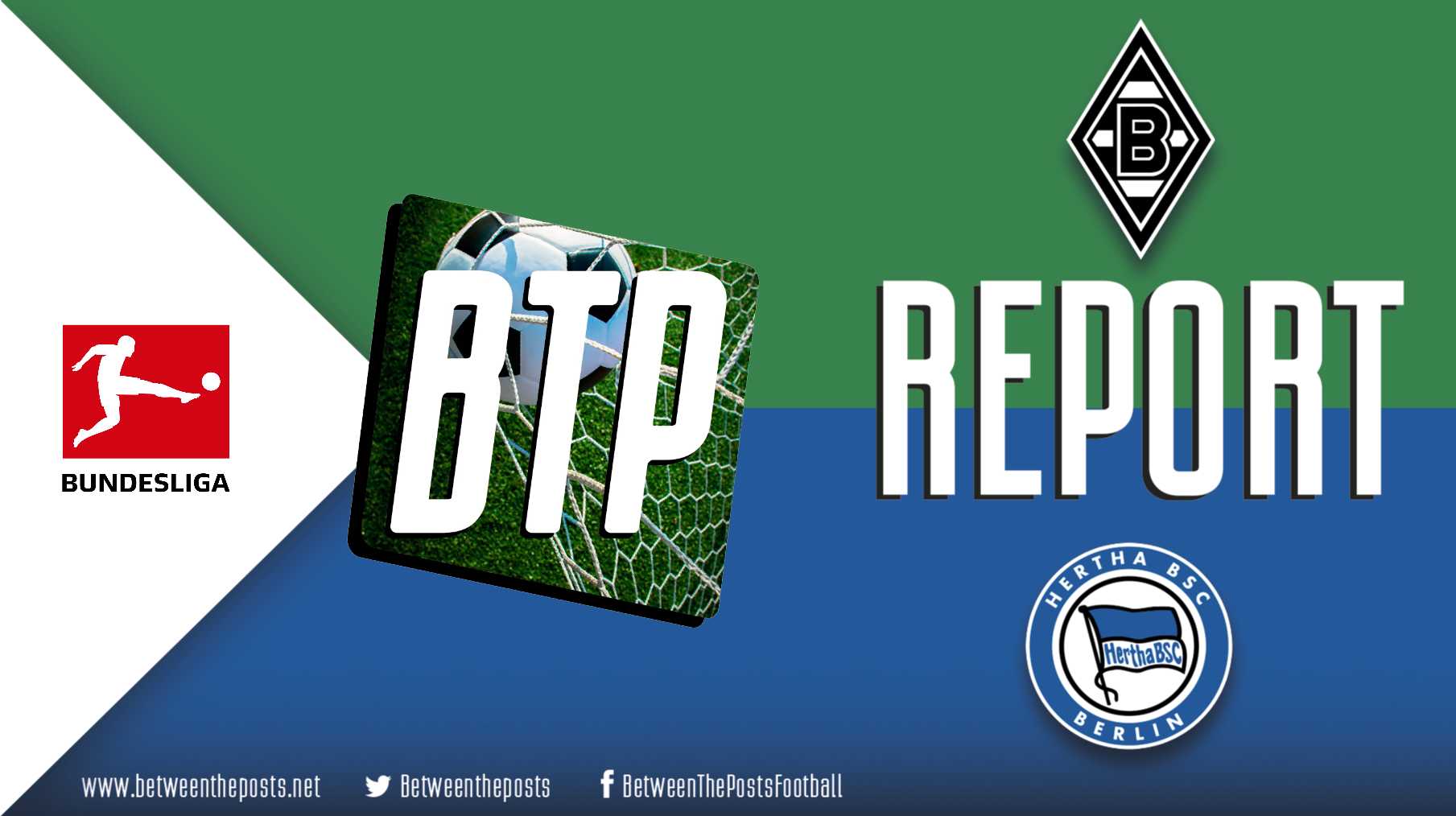