Carlo Ancelotti, an old fox of European competitions, tweaked his usual game plan to give Napoli an improved buildup structure and defensive solidity against Liverpool’s pressing and counterattacking. Liverpool, who are making little rotations in a brutal stretch of tough matches, were far from their best version on the ball.

Both Napoli and Liverpool are the big challengers of their respective leagues, the favorites to fight against the reigning champions.

However, Liverpool seems to be in a much better position than their Italian counterparts, with Jürgen Klopp’s project seemingly having reached peak maturity. The team has enjoyed the strongest Premier League start in their history and are playing like a well-oiled machine that look capable of challenging the supremacy of Manchester City, the rival they will face this coming weekend.

Things look more uncertain for Napoli. Carlo Ancelotti is one of the most successful managers in the business, but there is a sense that the current squad peaked under former coach Maurizio Sarri and that it will be hard for Ancelotti to improve on the results of his predecessor. To make things worse, Juventus’ signing of Cristiano Ronaldo seems to have widened the gap between the Italian champion and their competitors, something that Napoli painfully confirmed last weekend.

The Champions League seems to provide little consolation for Napoli, with their opening match ending in a disappointing draw against the theoretically weakest team in the group, Red Star Belgrade. A victory against Liverpool, under the warmth of their supporters at the Stadio San Paolo, was vital to restore confidence in the team’s ability to compete against the best in Europe.

Lineups
In this early season, Ancelotti has shifted Napoli from the 4-3-3 used under Sarri to a shape that can be best defined as an asymmetric 4-4-2. Allan and Marek Hamšík form a double pivot in midfield, while the wide men take contrasting roles. On the left, Piotr Zieliński or Fabián Ruiz occupy the half space, leaving the entire length of the left wing to the incisive Mário Rui. On the right, José Callejón hugs the sideline, waiting to make diagonal runs into the box.

Up front, Lorenzo Insigne has been moved from the left wing to a more central position—akin to that of a second striker—while the center forward role rotates between Dries Mertens and Arek Milik. 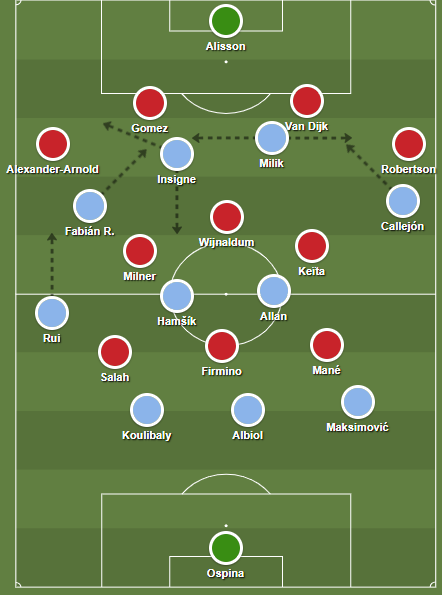 This same scheme was used against Liverpool, with Fabián and Milik starting ahead of Zieliński and Mertens in their respective positions. However, Ancelotti made an unusual, key personnel change to adapt to Liverpool’s pressing and counter-attacking: starting right back Elseid Hysaj was replaced by Nikola Maksimović, a natural center back. We will later elaborate on how this change affected Napoli’s defensive and offensive system.

Meanwhile, Liverpool remained in their usual 4-3-3 shape. Their starting lineup surprisingly featured just one personnel change from the eleven who faced Chelsea this past weekend: Naby Keïta would start instead of Jordan Henderson. Meanwhile, Georginio Wijnaldum took over Henderson’s role of holding midfielder.

First half: excessive verticality leads to an uneventful half
While Napoli had a clearly defined 4-4-2 shape when defending, the two fullbacks exhibited very different behaviors when in possession. Mário Rui would aggressively push up as if he were a wingback, while Maksimović would stay back like a center-back.

Therefore, Napoli effectively played with three at the back when in possession, who were further supported by the Hamšík – Allan double pivot as well as Rui providing a constant wide passing outlet. 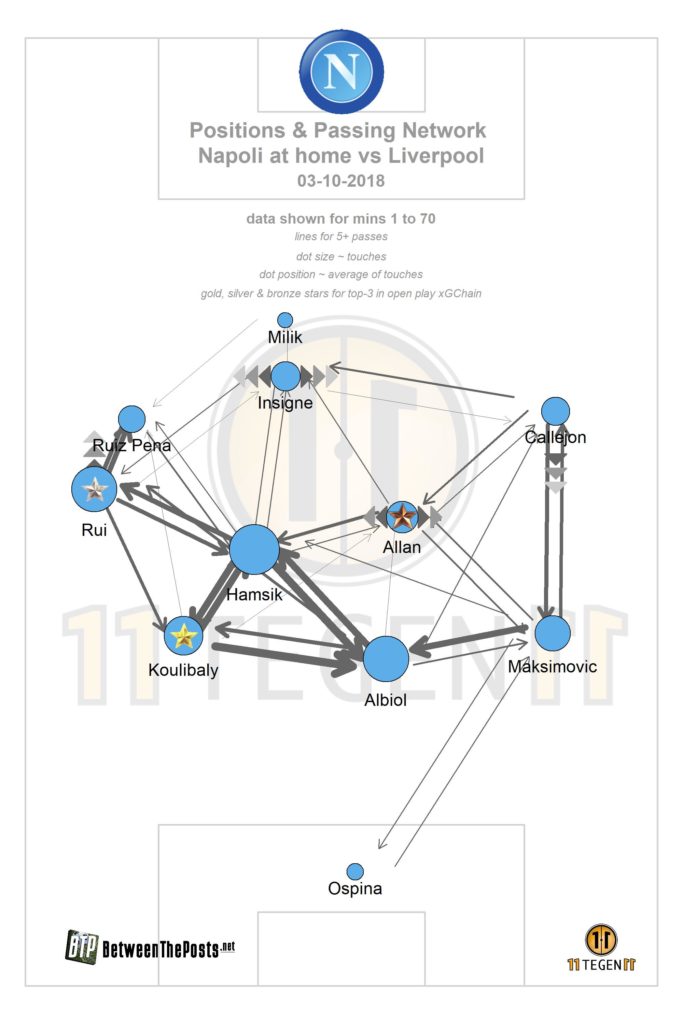 In a post-match interview, Ancelotti admitted that this buildup structure aimed to create numerical and positional superiority over Liverpool’s pressing system. The few times Liverpool did succeed at hindering Napoli’s buildup, their players had no qualms about sending long balls to Insigne, Milik and Callejón up front.

Napoli were also helped by Liverpool’s more conservative defensive plan. While Salah, Firmino and Mané would constantly try to cut off the passing lanes of the Napoli back three, Liverpool’s defensive and midfield lines took deeper positions, pressing less intensely and constantly than usual.

However, Napoli’s biggest success of the night was in defense. Napoli maintained a medium block throughout the game, with Milik and Insigne trying to press Liverpool’s center backs. This timid press was not aimed at recovering the ball but at hindering and slowing down Liverpool’s buildup.

Even though Napoli did not commit more men to their press and Liverpool found themselves in numerical superiority, their defenders and midfielders often resorted to more desperate long balls and through balls to their star forwards. 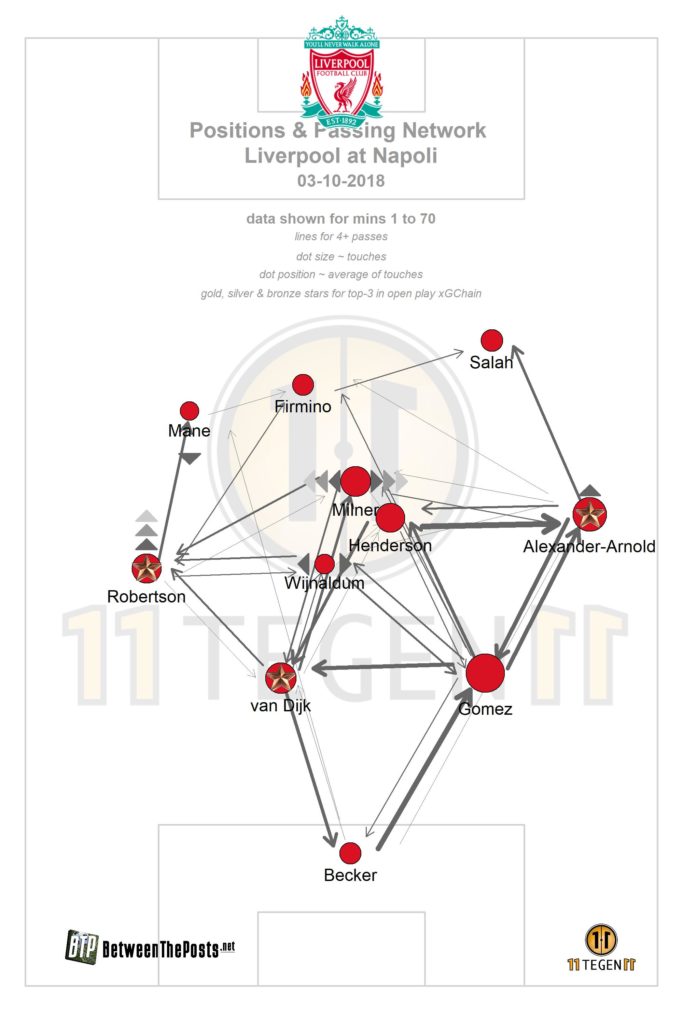 This excessive verticality was noted by Klopp in a post-match interview, where he stated that “with the ball we were too hectic, when there was no reason to be hectic”. The only Liverpool player who was doing something different on the ball was Naby Keïta, who after the initial 15 minutes had to abandon the pitch due to back problems and was replaced by Henderson.

Liverpool’s forwards were constantly shut down by an intense and focused Napoli defense, where the constant presence of three defenders at the back helped them deal with counterattack attempts.

All in all, we could say that both teams managed to cancel each other out during the first half, with Napoli also suffering from excessive verticality in their attack and their forwards—Insigne, Milik, and Callejón—crashing against Liverpool’s defense. By the end of the half, both teams had only generated 3 shots each, with Liverpool having no shots on target or inside their opponent’s box.

Second half: Napoli’s insistence and substitutions pay off
Very little changed for Liverpool’s attack during the second half. Their game on the ball kept suffering from impatience in the form of excessive verticality, and their forwards kept consistently losing duels against Napoli defenders.

The substitutions of Fabinho for James Milner and Daniel Sturridge for Mané did little to improve on Liverpool’s rare impotence towards goal. During the entire second half, they only produced one more shot, effectively finishing the game with no shots on target and a measly total of 0.05 Expected Goals.

On the other hand, Napoli finally found more fluidity and penetration on the ball thanks to the hyperactivity of Milik and an especially inspired Insigne. Both attackers started dropping into deeper positions to provide better passing lanes for their teammates in defense and midfield. Thanks to this contribution, Napoli started breaking Liverpool’s pressing lines with ease, with Insigne and Milik receiving these passes and then laying off the ball to each other or to the midfielders in the final third.

The gears of Napoli’s offensive game were finally up and running, with Mário Rui and Callejón flying up and down the flanks, Hamšík and Allan pushing up and loading Liverpool’s box, and above all, Insigne and Milik finding more and better shooting positions.

However, Liverpool’s defense of the box and Alisson’s saves resisted the siege, and after the 60th minute, Napoli’s offensive intensity decreased once again. Ancelotti decided that the team needed substitutions to keep their momentum going and replaced Milik with Mertens and Fabián with winger Simone Verdi. Mertens provided even more mobility in Napoli’s attack while Verdi provided a directness and aggression that Fabián had lacked throughout the game.

Gomez and Van Dijk did their best to clear Liverpool’s box of an incoming barrage of crosses, but in the end, a few lapses in Liverpool’s defensive focus started showing and Napoli’s persistence paid off. In the 90th minute, Mertens drifted wide right to help Callejón beat Van Dijk and Robertson, and Callejón delivered a deadly low cross into the box that Insigne converted, running out behind Gomez’s back. The Stadio San Paolo roared and chanted in joy.

Takeaways
Ancelotti’s nascent Napoli project receives a much-needed boost with a vital victory over one of the strongest teams in Europe. This result builds confidence in Ancelotti’s new 4-4-2 system and reassures fans, players and management that the team is headed in the right direction, even if fighting for the Serie A title against Juventus looks like an increasingly uphill battle.

While Liverpool were not at their best, it’s hard to remember a team that shut them down so well, and credit must go to Ancelotti’s tactical tweaks and game management as well as the players’ execution of the game plan.

As for Liverpool, they will have to demonstrate in the upcoming matches that this defeat is just a blip on the radar and not the end of a tremendous run of form. The Liverpool we saw at the Stadio San Paolo reminded us of the team we had seen in previous seasons, who had little means to break through an organized, compact defensive block.

It is inevitable to wonder if this underperformance might also be caused by a lack of rotations in this early season, with new recruits like Fabinho and Xherdan Shaqiri barely seeing any minutes. 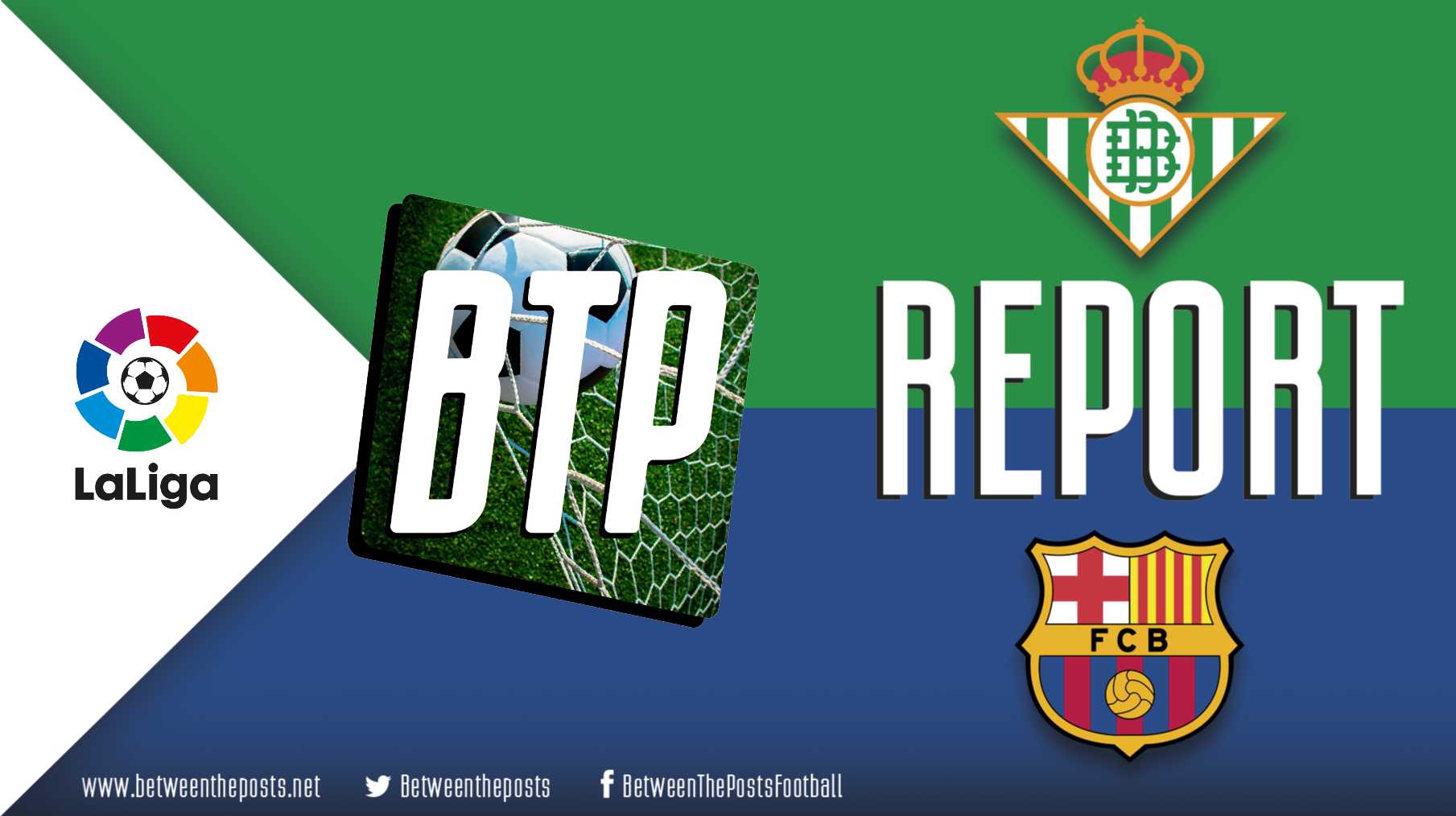