This Nations League semi-final proved to be a bad advert for playing out from the back, as center-back errors from both sides defined the scoreline. However, while Matthijs de Ligt’s error looked pretty much as a one off within an overall successful buildup by Netherlands, John Stones’ errors were representative of England’s problems throughout the game.

Eleven months after England’s World Cup semi-final heartbreak against Croatia, another semi-final awaited them in Guimarães as they impressively won their Nations League group against Spain and Croatia, booking their place in the finals of this new tournament. Being here was also significant for Netherlands, since they had to beat the past two World Champions in France and Germany to get here after years in the wilderness.

Gareth Southgate had selection problems for the Nations League primarily in the midfield, which has arguably been their problem area overall. With Harry Winks’ fitness deemed not to be enough to make it to the final squad and Jordan Henderson jaded after a Champions League final, Southgate opted for the trio of Declan Rice, Fabian Delph and Ross Barkley. Harry Kane’s fitness was also an issue and Marcus Rashford started up top instead, flanked by Raheem Sterling and Jadon Sancho. The back four was more familiar from the Nations League group stage, consisting of Kyle Walker, John Stones, Harry Maguire and Ben Chilwell.

Ronald Koeman, meanwhile, was able to go for his strongest lineup with Steven Bergwijn starting over Quincy Promes in the only position that often changes. Donny van de Beek, who had a spectacular season, only made the bench.

Koeman opted for a 4-2-3-1 formation, with Frenkie de Jong and Marten de Roon acting as a double pivot 4-2-3-1 is one of the most frequently occurring formations in football. The two most defensive midfielders are called a ‘double pivot’. in front of the two center-backs for a 2-2 buildup that turned into 3-1 at times with de Jong dropping behind, similar to Ajax. De Jong was the main outlet as we saw him do all season, receiving from the center-backs and never looking like losing the ball. Daley Blind and Denzel Dumfries provided the width to a very fluid front four that overloaded the center of the pitch with constant movement, creating passing options for de Jong to find. 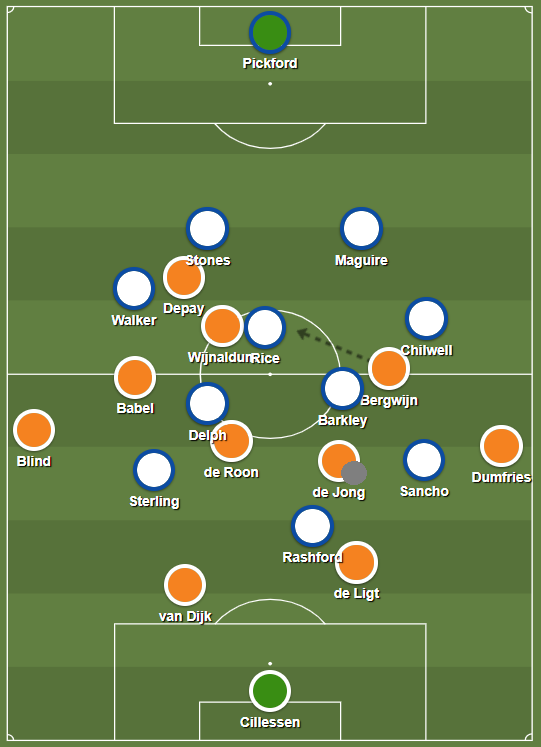 First half – Frenkie de Jong in possession. Barkley has Bergwijn to worry about and de Jong comfortably receives from de Ligt who received pressure from Rashford. De Jong turns and finds Bergwijn between the lines in accustomed fashion, and Netherlands proceed to the final third. The one-third of the pitch that is closest to the opposition’s goal.

The difference between the two sides’ buildup was both that Dutch center-backs did not mind playing long when necessary after getting heavy pressure in deep areas and they had de Jong, while English center-backs were too committed to playing out from the back in a problematic buildup organization. The first possession of the game right after kickoff was a good example – England pressed high with four players and when van Dijk saw he did not have many options, he sent a direct ball towards Dumfries.

England did have some decent buildups, but the quality of their center-backs and their midfielders was simply not enough to consistently progress the ball without making errors. Netherlandshad already proven to be a very stern side off the ball even against the likes of Germany and France, and their pressure constantly forced England defenders into mistakes. 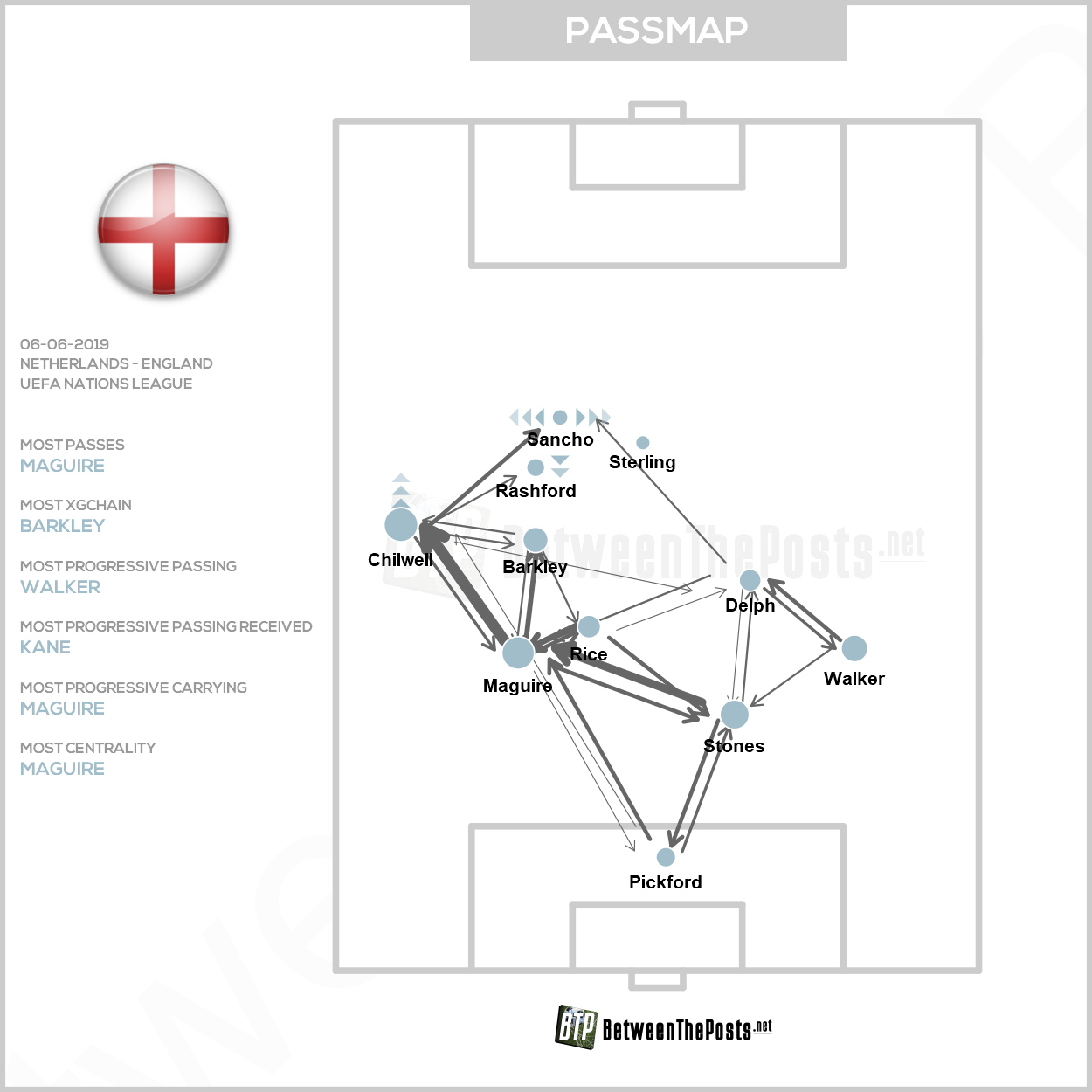 England’s passmap shows a lack of structure.
Lots of passing at the back without actual progression of the ball.

Another difference in both sides’ pressure was the superior usage of pressing triggers A pressing trigger is a specific pass or movement by the opponent that draws out a coordinated team press. and cover shadows When a player is positioning himself between the opponent that has possession of the ball and another opponent, he is blocking the passing lane. When applied the right way, his ‘shadow’ is effectively taking the opponent in his back out of the game, because the pass can not be played. by Netherlands – one of the most common sights during the game was Maguire receiving the ball short near the left, Netherlands players blocking all his passing options and waiting for a possible mistake. Maguire is a decent ball player, but he does take risks and is prone to errors. With his passing options strangled and the lack of someone he trusts under pressure, he often attempted his accustomed dribbles and ran into trouble. 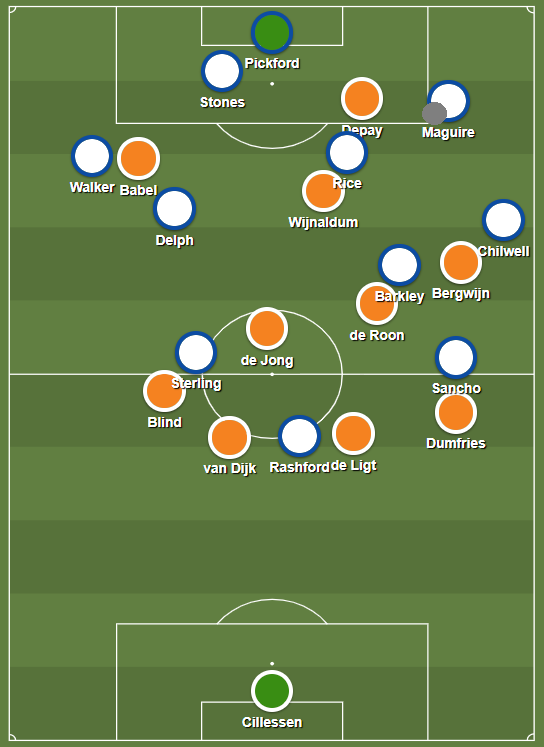 First half – Maguire on the ball. Depay is using a cover shadow to block a pass into Pickford and Stones, all the other players are marked. Maguire moves with the ball and finds Barkley who is under pressure. His pass into Sancho is intercepted.

Despite all the aforementioned aspects that favored them, the Netherlands made a big mistake in a very unlikely fashion. De Ligt failed to control a simple pass and Rashford was in a position to take advantage, earning a penalty while doing so. He converted to make it 1-0.

Netherlands was the better side though and the game was largely played in England’s half. Their buildup was better, they won the ball back in the opposition half more often, they had passing options and they progressed the ball well into the final third. 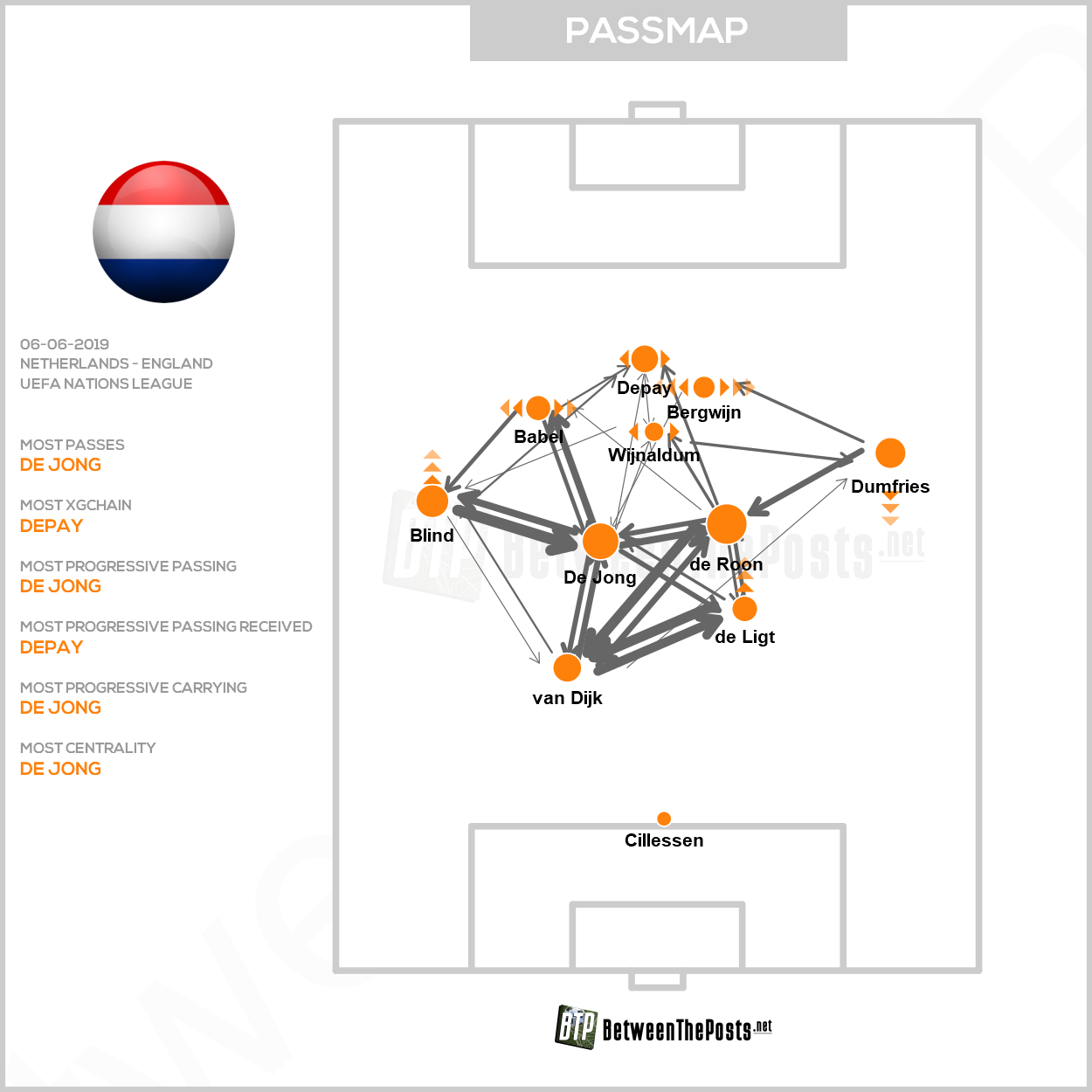 The Netherlands showed a nice structure in possession, with an important role for Frenkie de Jong, who did most of the ball progression both in terms of passing and in carrying.

Despite Netherlands being the better side in the first half as well, England was still proactive and had decent attacking moves at times when their buildup clicked. However in the second half, similar to the World Cup semi-final against Croatia, England gradually dropped behind the ball and handed the initiative completely to Netherlands. Netherlands were now comfortably committing numbers forward and started asking questions in the final third.

Rashford’s injury meant Southgate started the second half with Kane, which might also have played a part in England having less occasions pressing high due to his fitness issues. Later changes saw Southgate bring on Lingard for Sancho in the 61st minute, moving him to the right side with Sterling switching to the left. Koeman brought on Van de Beek for de Roon, moving Wijnaldum into the double pivot and van de Beek behind Depay similar to his Ajax role. Quincy Promes also entered the fray replacing Babel.

Now the game was predominantly played around the England box, and Netherlands eventually broke the deadlock with de Ligt, who continued his goal scoring from corner kicks in key games. After a disallowed Lingard goal and a few good Netherlands chances, the game went to extra time.

Extra time saw similar dynamics, and England’s problematic buildup finally led to their demise. Barkley could not find a passing option in time, received pressure, passed back to Maguire. Maguire passed back to Stones, Depay approached, Stones took one touch too many and lost the ball inside his own box as the last man. Pickford brilliantly saved, but Promes converted the rebound off a Walker deflection. Netherlands kept their pressure high up the pitch and later Stones again made a questionable choice to pass to Barkley, and his pass under pressure only found Depay, who provided Promes with an open goal. 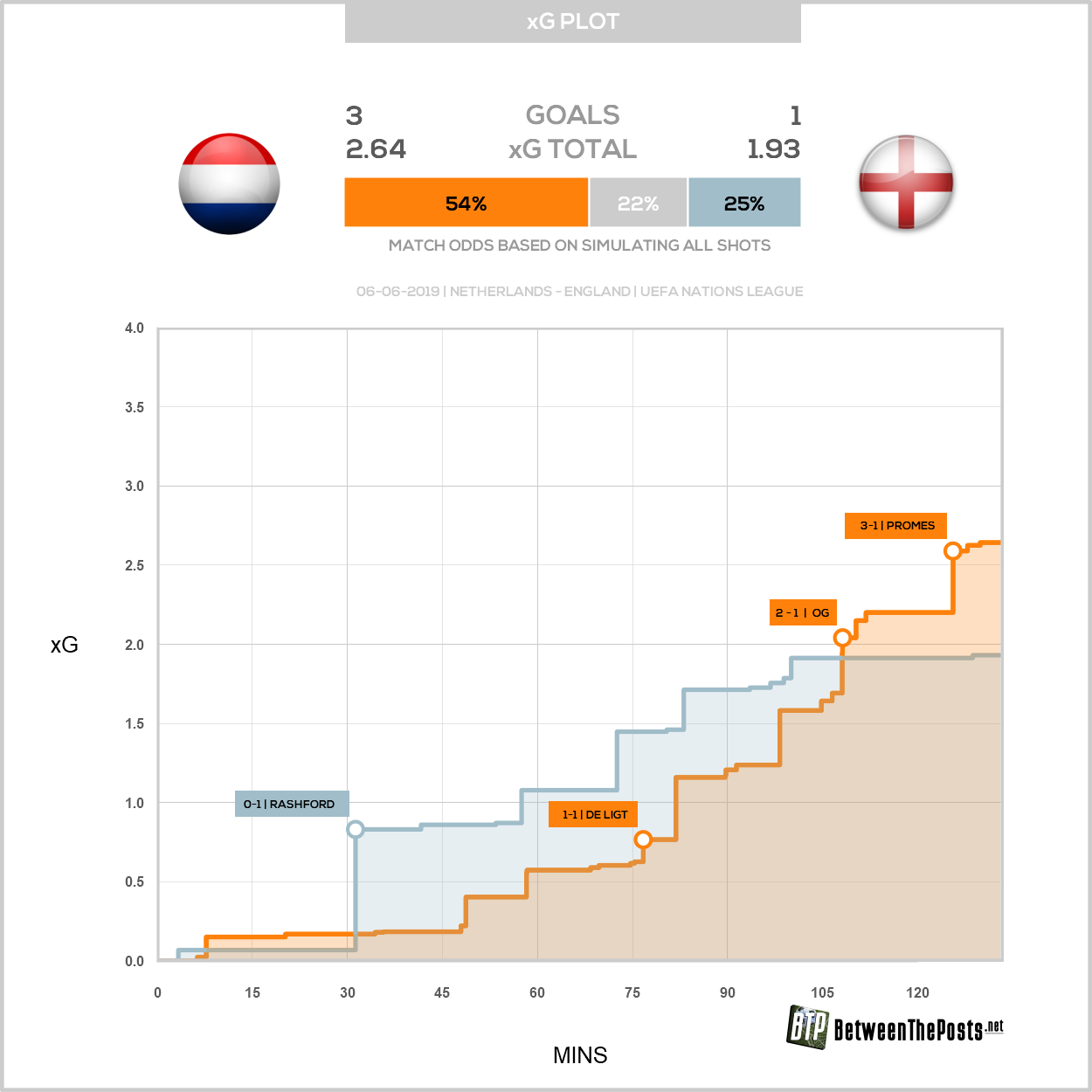 England’s successful World Cup saw them playing with a 3-5-2 system, that made the most sense because it provided numbers for a facilitated buildup phase in their newfound identity. Their center-backs simply were not good enough to play that passing style buildup from a two-center-backs system, so the extra player helped them to take risks and have extra safety. The two center forwards were dropping, the two number eights Alli and Lingard made runs beyond them, which fit their player profiles.

Later in the Nations League group stage Southgate switched to a 4-3-3 shape, with his in-form wingers, a resurgent Harry Winks helping to pull strings in midfield, and the center-backs playing well. However at this current point in time they lacked the midfield options to dominate midfield and their center-backs were on poor form. A switch back to the 3-5-2 formation, or maybe a 3-4-3 could have helped their chances much more against the Netherlands here, considering Germany just had a very good game against them using that system in March as well. Southgate rather chose to continue his process with 4-3-3 but he was missing essential pieces to make the system work, and the decision proved him costly. 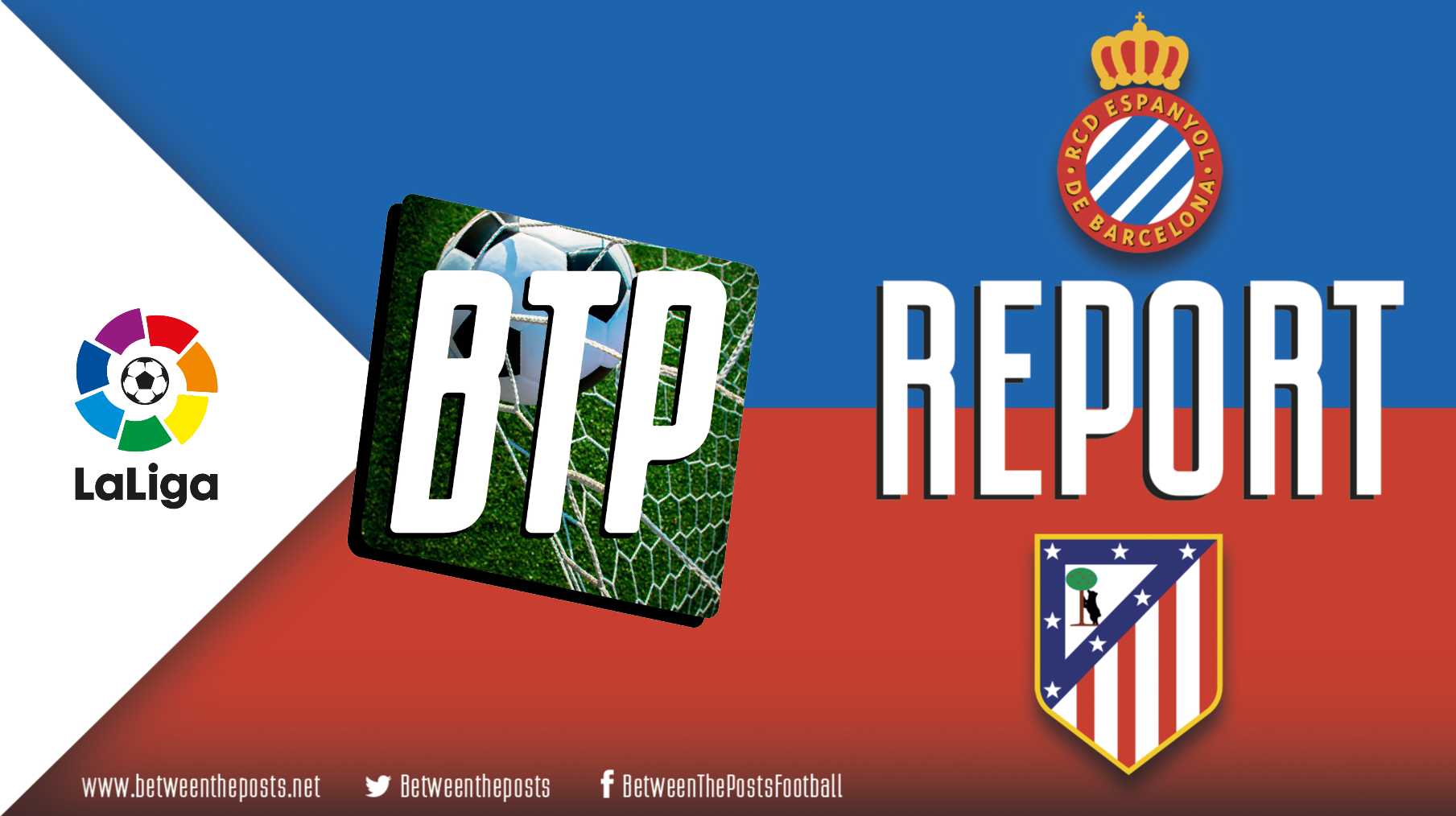