Germany were the better team for large spells in this match. The fact they conceded from a set piece and again failed to convert their chances meant the Netherlands got a relatively easy 3-0 win. Why Joachim Löw will have to go back to the drawing board once more.

Germany and the Netherlands are both countries that do not want to be reminded of the 2018 World Cup in Russia. The Netherlands missed the tournament altogether, the biggest problem during qualification being a chronic misinterpretation of the Dutch philosophy. The Dutch national team was mostly keeping possession for the sake of possession, instead of actually putting it to use. Refusing to adhere to modern football trends in defense cost them dearly as well.

Germany did manage to get to the World Cup, but once the tournament kicked off… it sure wasn’t pretty. You can fill a book with Germany’s problems at the World Cup. As this is a website about football tactics, we will keep it football-related.

In Russia, Germany’s counterpressing After losing possession, a team immediately moves towards the ball as a unit to regain possession, or at least slow down the pace of the counterattack. was never up to par. Because the fullbacks were positioned very high up the pitch and central midfielder Kroos was not paired with a good counterpresser, Germany failed to deal adequately with counterattacks. Some inefficient finishing did the rest, and they flew home after three games.

New age
But this is a new age for both teams and particularly for the Netherlands, optimism lies just around the corner. Manager Ronald Koeman has switched to a 4-2-3-1 formation and the hugely talented Ajax duo Frenkie de Jong and Matthijs de Ligt already made it into the starting eleven. Georginio Wijnaldum – a central or holding midfielder for Liverpool – plays as a ten, with De Jong and scrapper Marten de Roon just behind him. Steven Bergwijn and Denzel Dumfries made their international debuts, playing as right inside winger and offensive right back, like they do at PSV Eindhoven.

Germany’s manager Joachim Löw has been very vocal on his diagnostics of the disappointing World Cup. He stated that his possession-heavy approach might miss out on the crucial balance between offense and defense. Against France, Germany’s fullbacks were positioned a lot less offensively, while Kroos’ midfield partner – Joshua Kimmich, who played as a right-back at the World Cup – was very conservative in going forward. This midfield duo was complemented by Emre Can. Schalke’s Mark Uth made his debut as a striker, with pacy Timo Werner shifting to the left wing.

Neutralize Frenkie
Both teams had the same approach in build-up play. Their predominant playmakers (Frenkie de Jong for the Netherlands and Toni Kroos for Germany) dropped deeper to the left side of the field and tried to distribute play from there.

Germany largely contained their opponents in a 4-1-4-1 formation, with their midfielders positioned around the halfway line. When De Jong tried to get on the ball, Emre Can would aggressively pressure him and thus prevent him from passing the ball forward. If De Jong tried to avoid Can by dropping next to his central defenders, either Mark Uth or Toni Kroos would provide pressure. The Dutch build-up was largely neutralized this way.

The Netherlands tried to press a bit higher up the field when Kroos would drop deeper to collect the ball. They would send either Bergwijn or De Roon to pressure Real Madrid’s central midfielder. 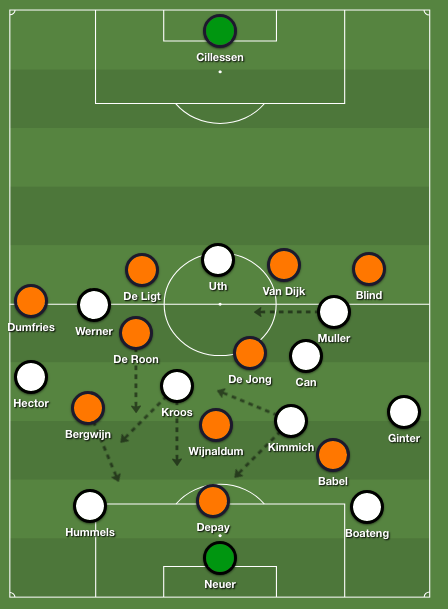 Positioning and general movements by both teams when Germany were building-up.
Especially in the opening phase, the Netherlands tried to press the Germans very high.

Sometimes, Kroos’ midfield partner Kimmich would drop as well to drag out more Dutch players. During the whole first half, Kimmich and Kroos did a fine job in playing out of the Dutch pressing traps and progressing the ball upfield.

Germany is better, but the Dutch take the lead
Germany’s left back Jonas Hector often went toe-to-toe with Dutch right back Denzel Dumfries. This often led to Timo Werner going up against Matthijs de Ligt one-versus-one, or going in behind. De Ligt is a fantastic defending talent, but he is not very fast nor agile. The pacey Werner got the best of him a couple of times in the opening phase, and Germany created the better chances. Werner went one-on-one with Dutch goalkeeper Jasper Cillessen, only to fluff it wide.

In the first thirty minutes, aside from some promising stranded counterattacks, the Netherlands could not create anything. A rare spell of possession on Germany’s half resulted in a corner-kick. Lyon’s Memphis Depay beautifully delivered the ball on Ryan Babel’s head. The rebound fell for captain Virgil van Dijk and the 1-0 was on the board.

The Netherlands had their best spell of the evening after this goal, playing mostly on Germany’s half and getting in the box several times. The 1-0 score at half-time still felt against the tide though.

Two areas Löw will feel concerned about
By slotting Kimmich from right back into midfield, Löw has made the deliberate choice to sacrifice right wing offense for a better build-up and a better counterpress. Right winger Thomas Müller played with a lot of positional freedom, but the new right back Matthias Ginter offered very little in terms of overlap. As a result, Germany’s right flank was non-existent in terms of offensive output the entire game. 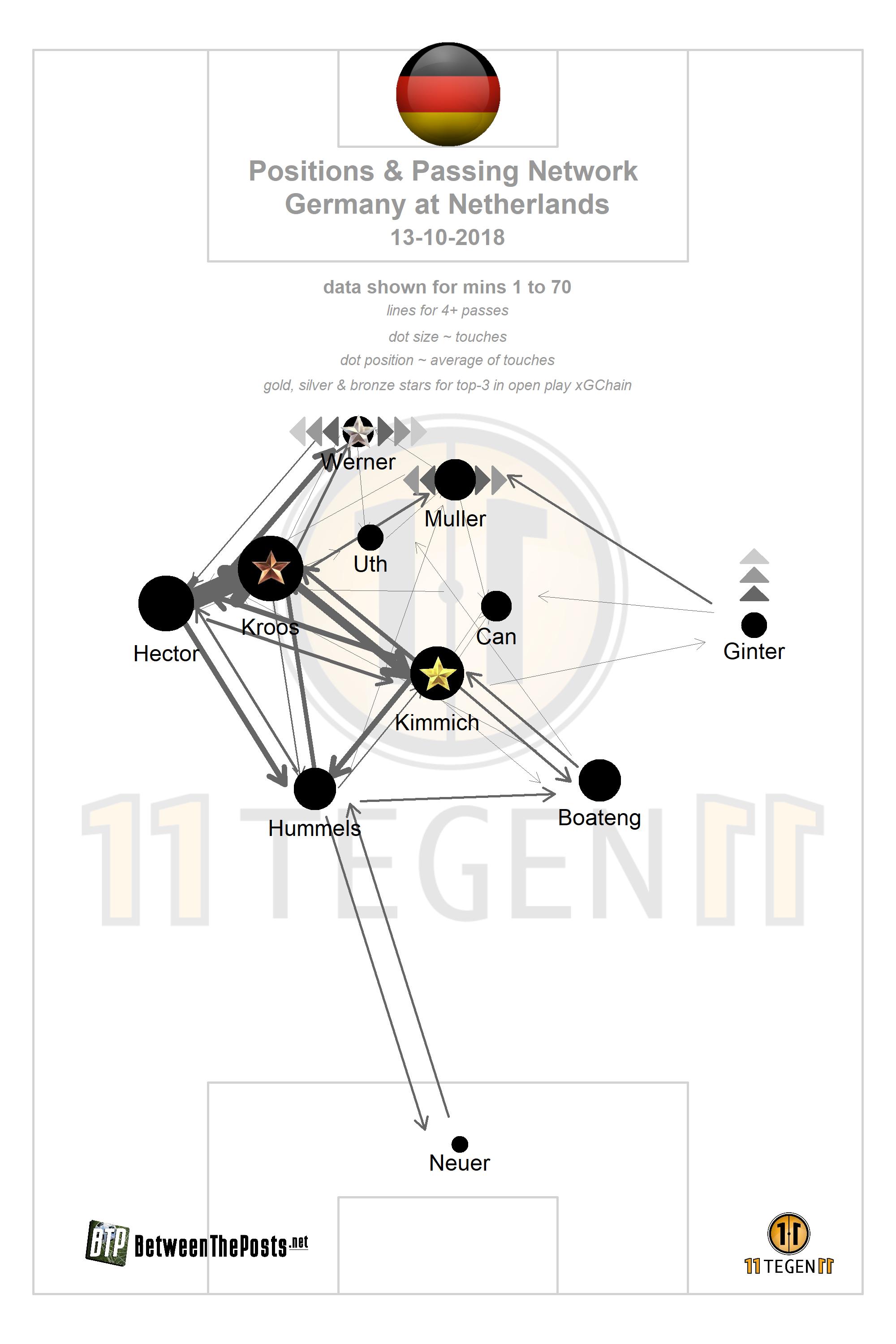 Germany’s extreme left sidedness is crystal clear from this passmap.

Another area where Löw will feel troubled is in central defense. Free-roaming striker Depay was causing Jérôme Boateng and Mats Hummels all sorts of problems. These two defenders are still elite ball distributors, but the cracks are rapidly starting to show over their defensive and physical abilities. To put it frankly: especially Boateng looked like an old man at times.

More fire power for Germany
Twelve minutes into the second half, Löw had seen enough. He brought on Leroy Sané and Julian Draxler for Müller and Can, shifting the formation to a 4-2-3-1, with Kroos and Kimmich as the double pivot 4-2-3-1 is one of the most frequently occurring formations in football. The two most defensive midfielders are called a ‘double pivot’.  and Werner out right. In defense the Dutch formed a 4-4-1-1 or 4-5-1 against this. 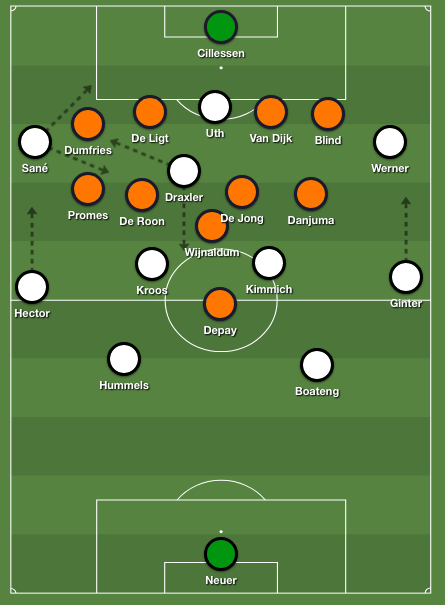 The way Germany attacked in their 4-2-3-1 formation.
The Dutch wingers and defenders were man-marking on the flanks.

The image displays the Netherlands in a very tight 4-4-1-1 shape. They did manage to pull that off once in a while, but more often than not, half the team was pressing, while the defenders plus De Roon were not stepping forward. This yielded lots of space to play in for the Germans.

With the addition of Sané and Draxler, immediately the tempo went up. On the flanks, the Dutch wingers and defenders were man-marking. Even when the German wingers were coming inside, the Dutch defenders would follow. Germany neatly exploited this to create some chances.

Sané, for instance, missed a huge chance in the 65th minute, when Denzel Dumfries stepped out of defense, like the rookie he still is on international level. Sané was in acres of space but could not convert. Germany kept creating half-chances against the Dutch team that was now truly playing in a low block. A low block refers to a team that retreats deep in their own half out of possession, generally only disrupting their opponents around their own box.In hindsight, that missed chance by Sané felt like a tipping point.

Germany kept playing around the Dutch defense, committing more and more men forwards. The old complaints from Russia surfaced once again, as the Dutch managed to launch counterattack after counterattack, though they could not convert.

For the final quarter of the game, the Dutch were attacking with Depay, Wijnaldum, Quincy Promes and debutant Arnout Danjuma. There was a series of counterattacks in where these players started promising breaks, but failed to find the final pass or land a serious shot on target.

In the 86th minute, Memphis Depay made an end to all speculation by bagging the second Dutch goal of the night. To no-one’s surprise, it came after a counterattack. In the third minute of added time, the industrious Wijnaldum – one of the hardest workers on the pitch – made it 3-0.

Takeaways
Was it really necessary to switch it all up this radically? That is the key question lingering in the minds of Löw and his staff. The way Germany now contains their opponents is probably better suited for their aging center backs, but they’ve sacrificed a lot of support for their forward line. Whether this is the way forward remains to be seen.

For the Netherlands, a 3-0 win was probably flattering. It was in fact their biggest win over Germany ever. Defensively, Koeman will have to sort out whether he wants his team to sit deep and play on the counterattack, or try to press higher up the field. With a core of De Ligt, Van Dijk, De Jong, Wijnaldum and Depay, this team has a very healthy chance of making strides, and at least being present at the European Championship of 2020. 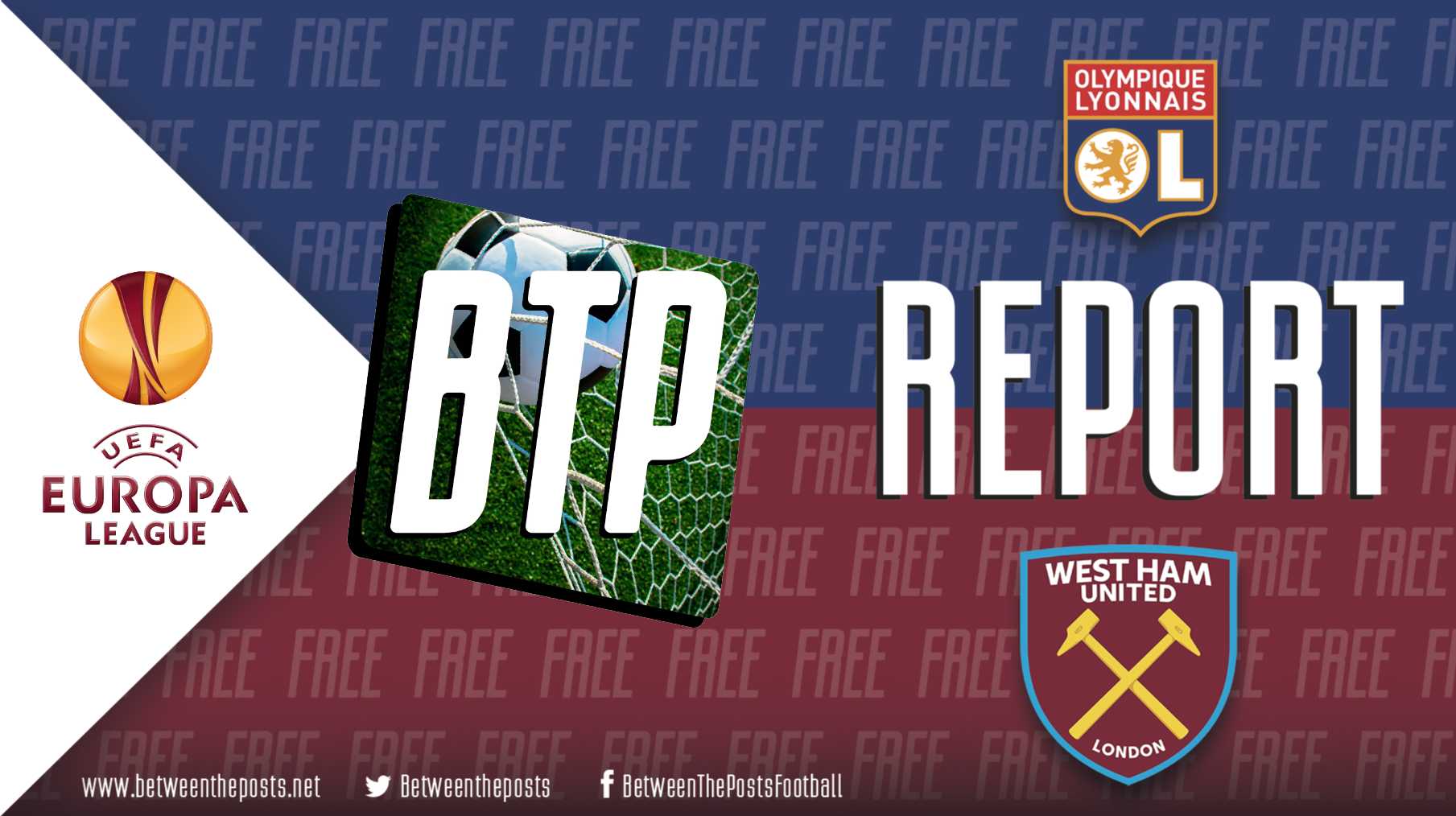 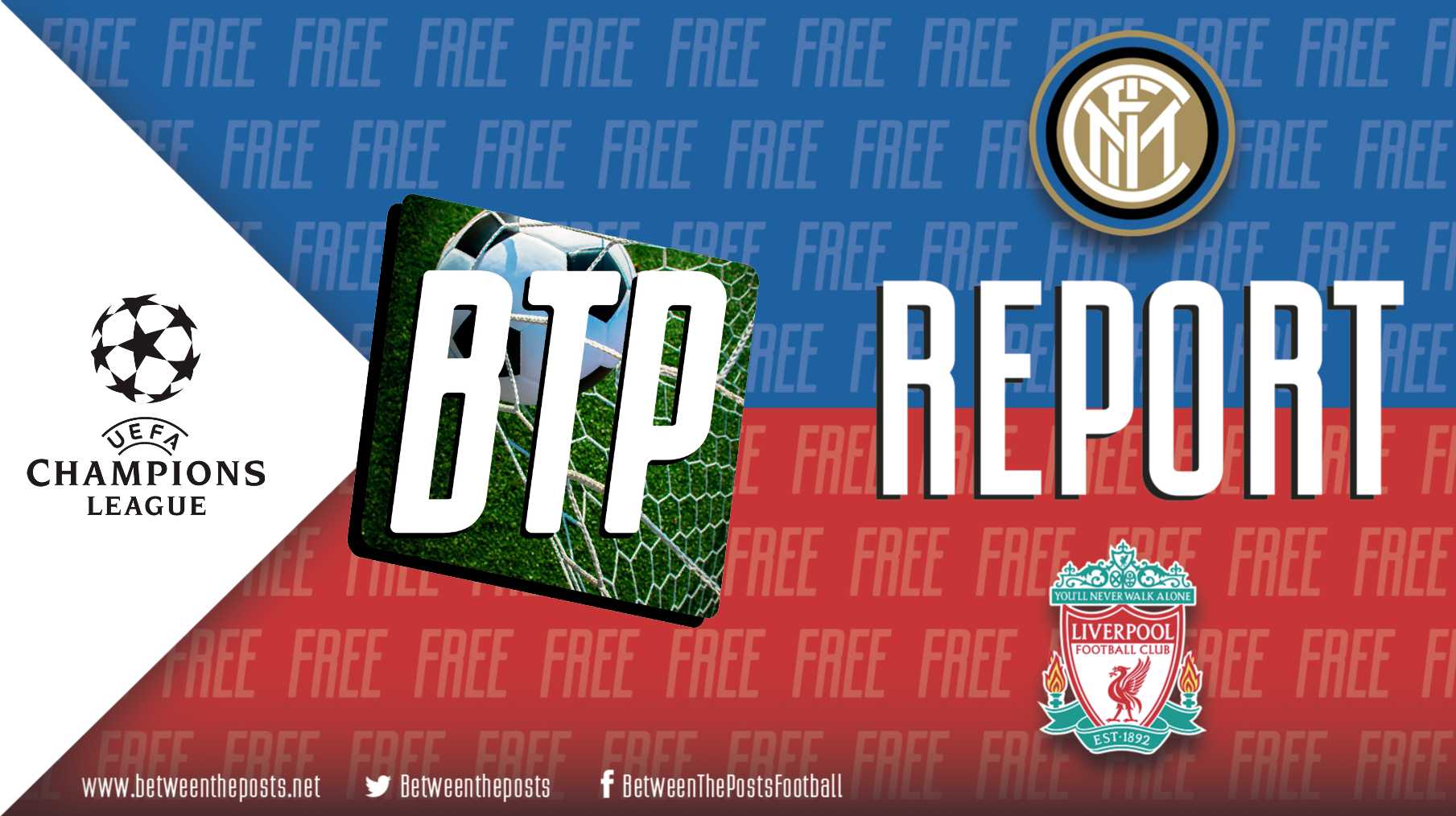