This game looked promising in the first few minutes with both teams pressing high, but also able to play out from under pressure to create chances. However, the game was influenced in a big way when New England was reduced to ten men after a failed last man tackle early on. New York City took a lot of time and needed different formations, but eventually converted a late penalty to take all three points.

Most leagues are taking a pause during the international break, but MLS closes in on the last match days with playoff places up for grabs. As the best team in the Eastern Conference, New York City FC almost certainly clinched their spot for the postseason. New England, on the contrary, currently sits in seventh position which would just be enough to advance to the playoffs. Two points is not a comfortable gap, though, so Bruce Arena and his team still have to win a few of the remaining games.

With some players away on international duty, Domenec Torrent made four changes. Goalkeeper Sean Johnson was replaced by Brad Stuver, Sebastien Ibeagha started in the center-back position instead of Peruvian international Alexander Callens. In addition to that, captain Alexander Ring returned to the starting lineup. Bruce Arena did not miss any of his players and trusted the same eleven players that drew 1-1 against Toronto FC the week before.

Both teams started with a high press in the first few minutes, but on their turn also showed how to outplay this. The guests stroke first in the second minute, after the man-oriented pressing by NYCFC could be passed easily. A simple long ball behind the advanced defensive line was enough to create a one-on-one situation for Juan Caicedo, who converted.

New York then was able to attract their opponent’s pressing to the left side to shift the play to the other side. They created a numerical superiority there and eventually found the free player. He was open to advance the ball and create a chance with a long ball over New England’s back four.

However, after nine minutes were played, center-back Antonio Delamea received a controversial red card. Subsequently, New York City dominated possession and was able to create chances in the following minutes, with most of them following the same pattern.

Number ten Maxi Moralez liked to drop from his number ten position to receive the ball in deeper areas, right winger Gary Mackay-Steven therefore occupied the space between the lines, opening the right wing for Anton Tinnerholm. The right back constantly made runs into depth and profited from a poor defensive performance by DeJuan Jones, who was often caught out of position. NYCFC failed to score from these chances, though, and struggled to constantly create chances in the following minutes after the pressure decreased, because they focused too much on these diagonal balls to the right side. New England was increasingly able to defend these situations.

The 4-4-1 formation that the guests played in after the red card was not the most suitable formation against NYCFC’s organization. Bruce Arena switched into a 5-3-1 formation after around thirty minutes. However, they were still vulnerable against long balls behind their back-line. This was down to a few problems.

First of all, the defense played very high without pressuring the ball carrier. This is dangerous, because if the ball carrier is not pressured, he can easily play a pass over the heads of the defenders. In addition to that, the body positions of the defenders were not optimal. To run in the direction of their own goal, they had to turn by 180 degrees instead of 90. This gives the attackers – whose body positions already face New England’s goal – an advantage.

The hosts, however, focused way too much on this weakness. From time to time they used third-man combinations A passing combination between two players, while a third player simultaneously makes a run, usually in behind the opponent’s defensive line. After the initial combination, the ball is quickly played in depth for the third player to run onto. to advance the ball behind New England’s midfield and get into promising attacking situations. But they limited their own game by playing lots of long passes.

Both teams change formation at half-time

Domenec Torrent could not be happy with how his team used the numerical superiority. Without making a substitution, he switched to a 3-2-4-1 formation. Left back Ben Sweat now played as the left center-back in the back-three. Tinnerholm stayed on the right and Mackay-Steven played as left wing-back from now on. New England started the second half with a changed formation, too. They returned to their 4-4-1 shape they used in the minutes after the red card.

With New York’s new formation, the style remained, but the tactics changed. They still focused on exploiting New England’s weakness to defend the space behind their backline. But instead of playing the passes behind the defense out of deep positions, the ball was advanced to either wing-back who then looked to play a flat pass into one of the players making a run into depth. 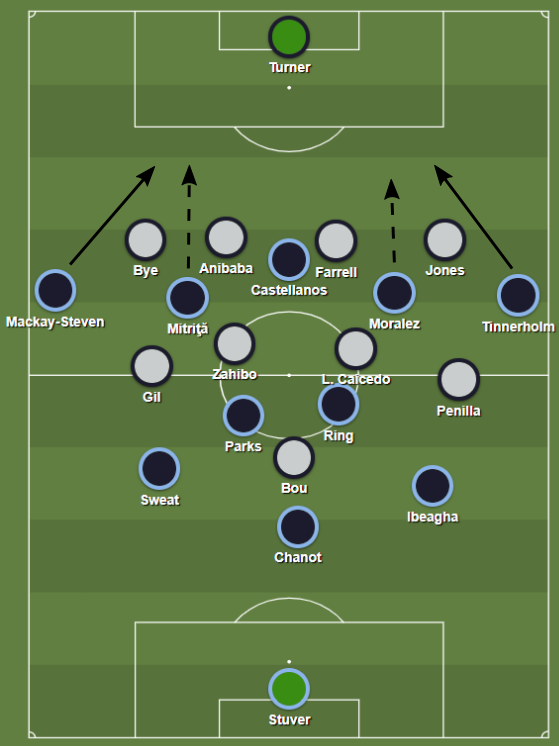 Because the hosts still trailed by one goal, Torrent opted for a riskier style by bringing in striker Jesús Medina for center-back Ibeagha. As a consequence, they switched back to a back four and had one additional player behind New England’s midfielders.

The change in formation did not have the effect Torrent hoped for as the control of his team decreased in the following minutes. His players started to play the long balls they used in the first half again. However, the equalizer in the seventieth minute was a well worked goal. Ring was able to attract the defensive midfielder to step out of his position. The hosts created a numerical superiority on the last line, which meant Tinnerholm was unmarked on the right wing. Ring played a ball behind the – again struggling – backline and the right back played a low cross in which was converted by Medina. 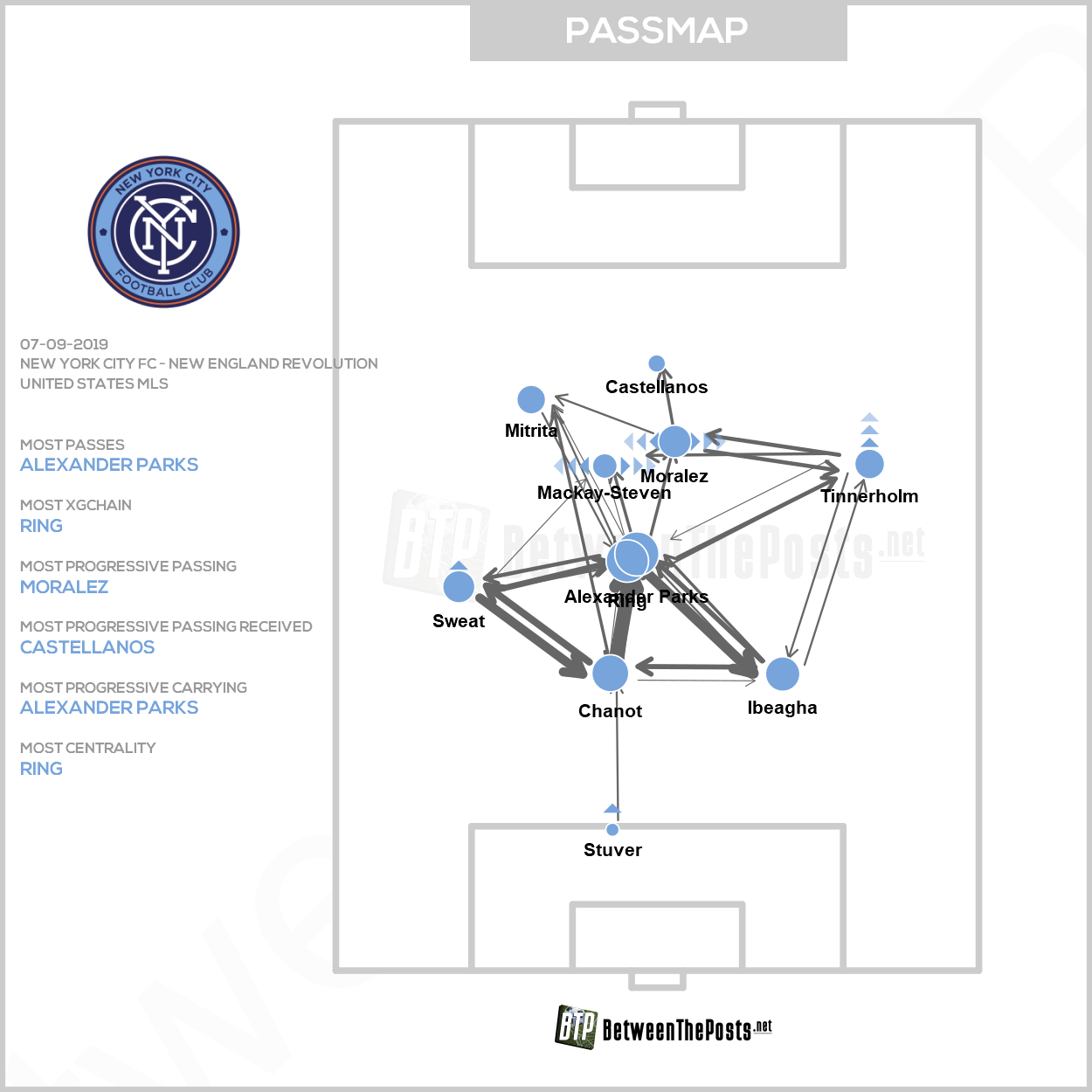 After the equalizer, Bruce Arena switched back to a 5-3-1 shape and brought in center-back Michael Mancienne. Desperately trying to score the late winner, Torrent went on and substituted another defender – left-back Mackay-Steven – for a new striker. The hosts did not even have a real shape anymore, but because seven players positioned themselves behind the opponent’s midfield, they were able to create chances.

This formation did come with a big risk and it was nearly punished, but New England was not able to finish off a three-on-three counterattack. The hosts had to wait until deep into injury time, when Alexandru Mitriţă drew a foul inside the box after an individual action. The penalty was eventually converted by Medina. 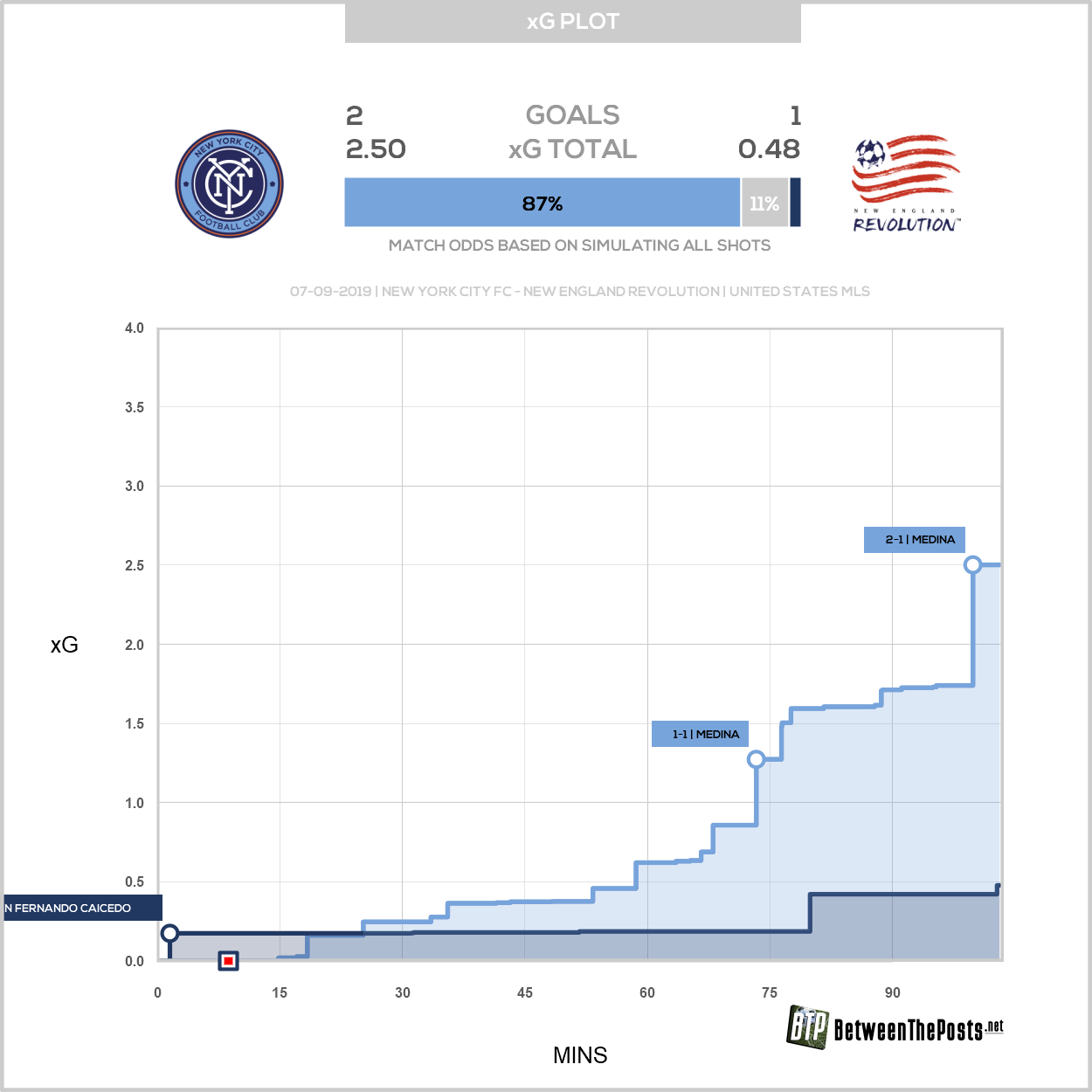 The game started with a few promising minutes, but the early red card took a lot of the excitement out. New York City’s idea to exploit the high defensive line was good, but they focused too much on long balls behind which limited their own game. From time to time they showed that they were able to advance the ball through combination play. If they had opted for a calmer possession-oriented football, chances are that they would not have to wait until injury time to score the winner.

It is not possible to judge New England’s performance adequately, because they played with ten men for almost the entire game. However, the vulnerability with long balls should be alarming. If it were for a better opponent on this day, the result could have been much worse. They now have five remaining games, two points and a game in hand to secure a playoff place in the Eastern Conference playoffs. 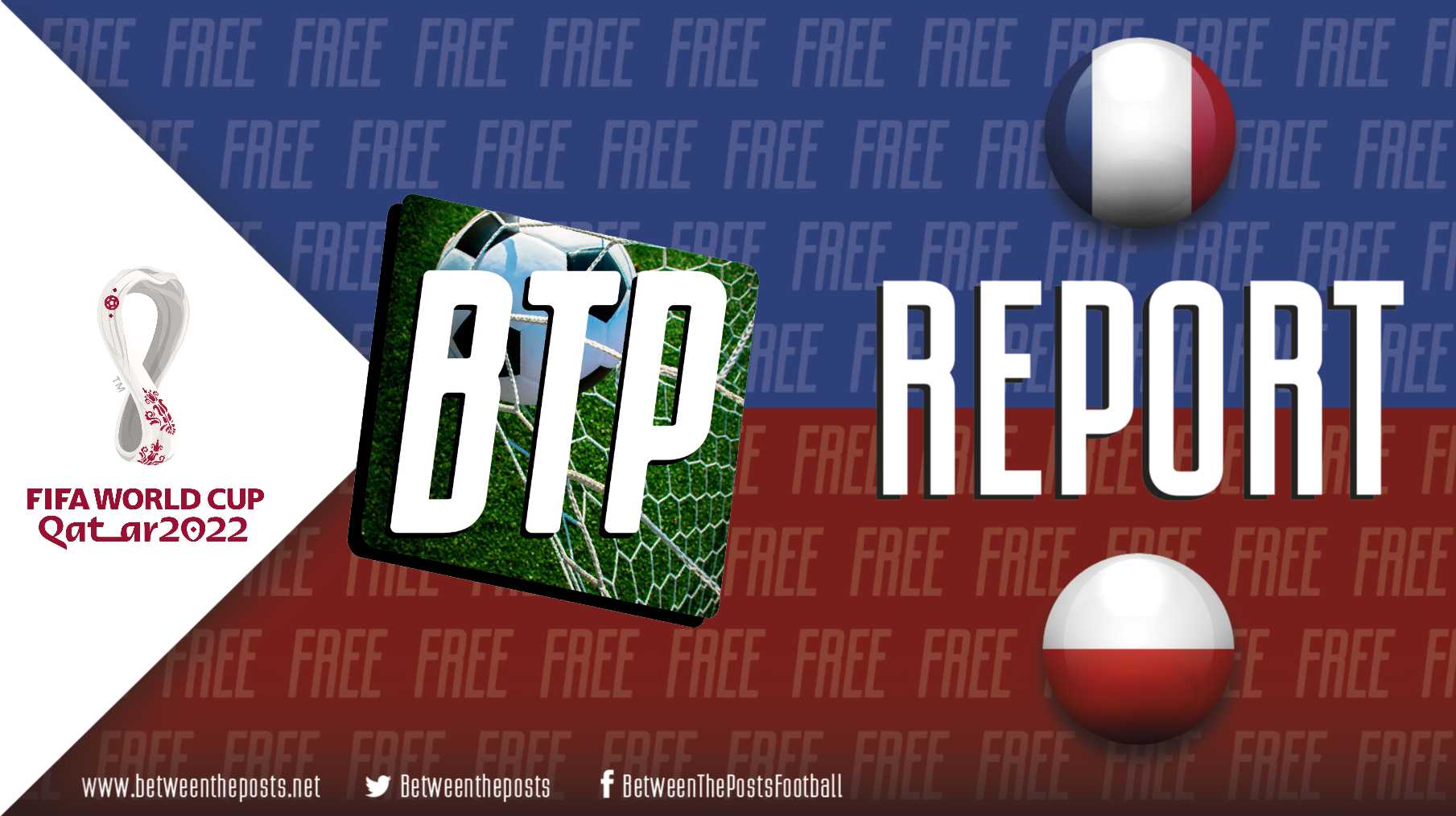 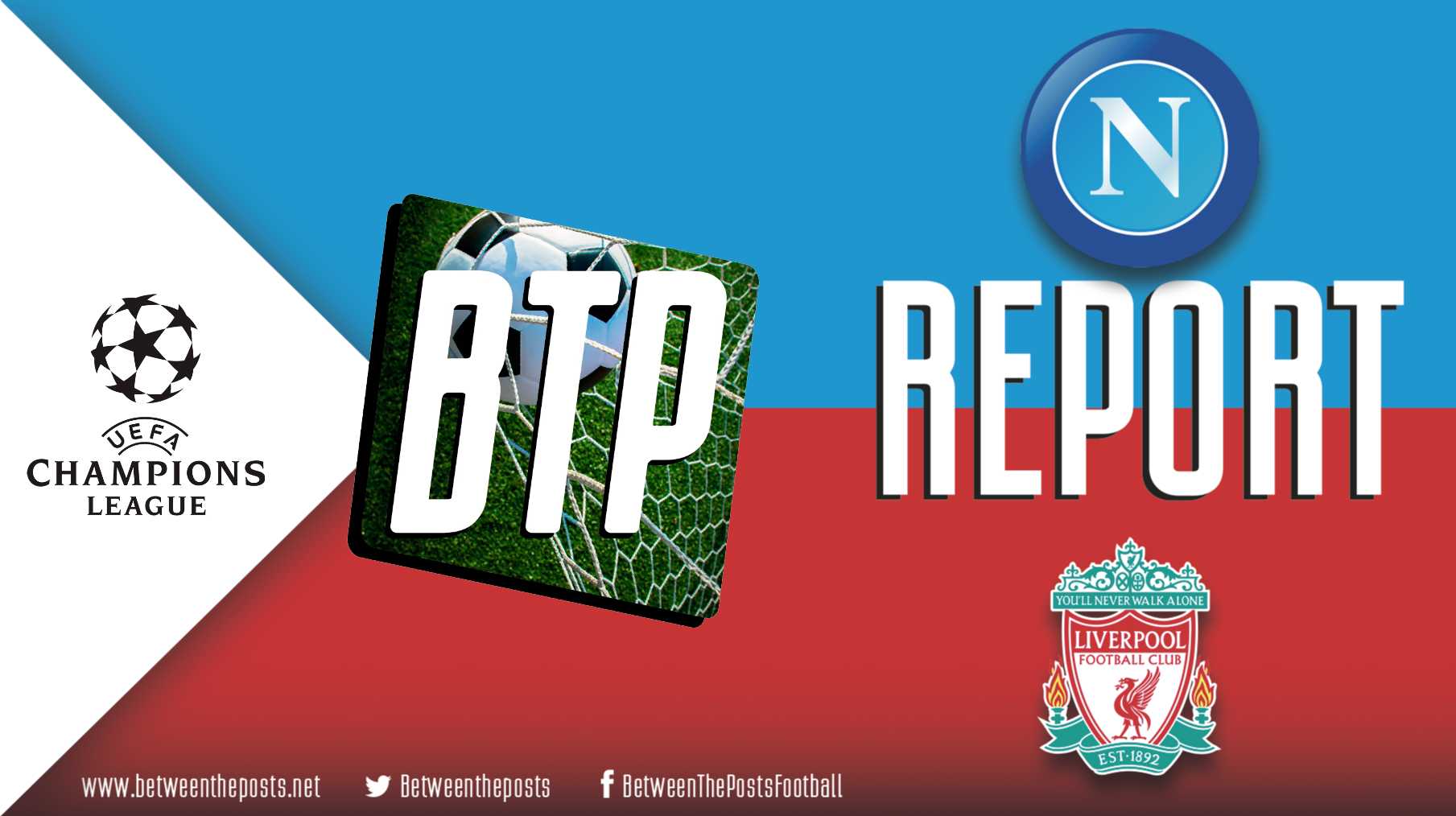