A firecracker first-half gave us three goals, a potential red card and end to end football throughout. The second half was much the same; a tumultuous match that peaked in the 85th minute, where a winner may have helped decide the Premier League title race.

This tasty Saturday evening clash saw mid-table Newcastle United come up against title-chasing Liverpool. Just looking to see the season out on a high, Rafa Benítez’s side had seven points from their last five games. Wins against Leicester City and Southampton were overshadowed by a disappointing loss to Crystal Palace but Newcastle had been strong at home, the highlight being their win over Pep Guardiola’s Manchester City back in January. A solid 5-4-1 formation was expected from a Benítez side that would attempt to frustrate Liverpool.

When Liverpool beat Newcastle 4-0 on Boxing Day, Benítez decided to change to this 5-4-1 formation and he has stuck to it ever since. Martin Dúbravka continued his fantastic season between the sticks for Newcastle. The back five had one change, Federico Fernández was replaced by club captain Jamaal Lascelles. Paul Dummett and Swiss international Fabian Schär began either side of him as Matt Ritchie joined Javi Manquillo as wingbacks.

Ayoze Pérez had shook off his hip injury and started out on the right, with Christian Atsu on the left. The central midfield area was occupied by Isaac Hayden and Ki Sung-Yueng, whilst lone striker Salomón Rondón began up top, looking for his tenth Premier League goal.

Liverpool had come off the back of a Messi masterclass in Barcelona and were likely to make changes for the upcoming tie at St. James’ Park. As for their Premier League form, they had not lost since January. Fourteen goals in their last five games meant tonight was to be attack against defense.

As expected, alterations were made. Their usual 4-3-3 formation saw five changes, including Daniel Sturridge up front. Roberto Firmino did not even make the bench. Mainstay Alisson began his forty-seventh game in all competitions and Virgil Van Dijk was accompanied by Dejan Lovren, as the back four remained relatively unchanged. Klopp elected a midfield trio of Fabinho, Jordan Henderson and Georginio Wijnaldum to backup Mohamed Salah, Sadio Mané and the aforementioned Daniel Sturridge. 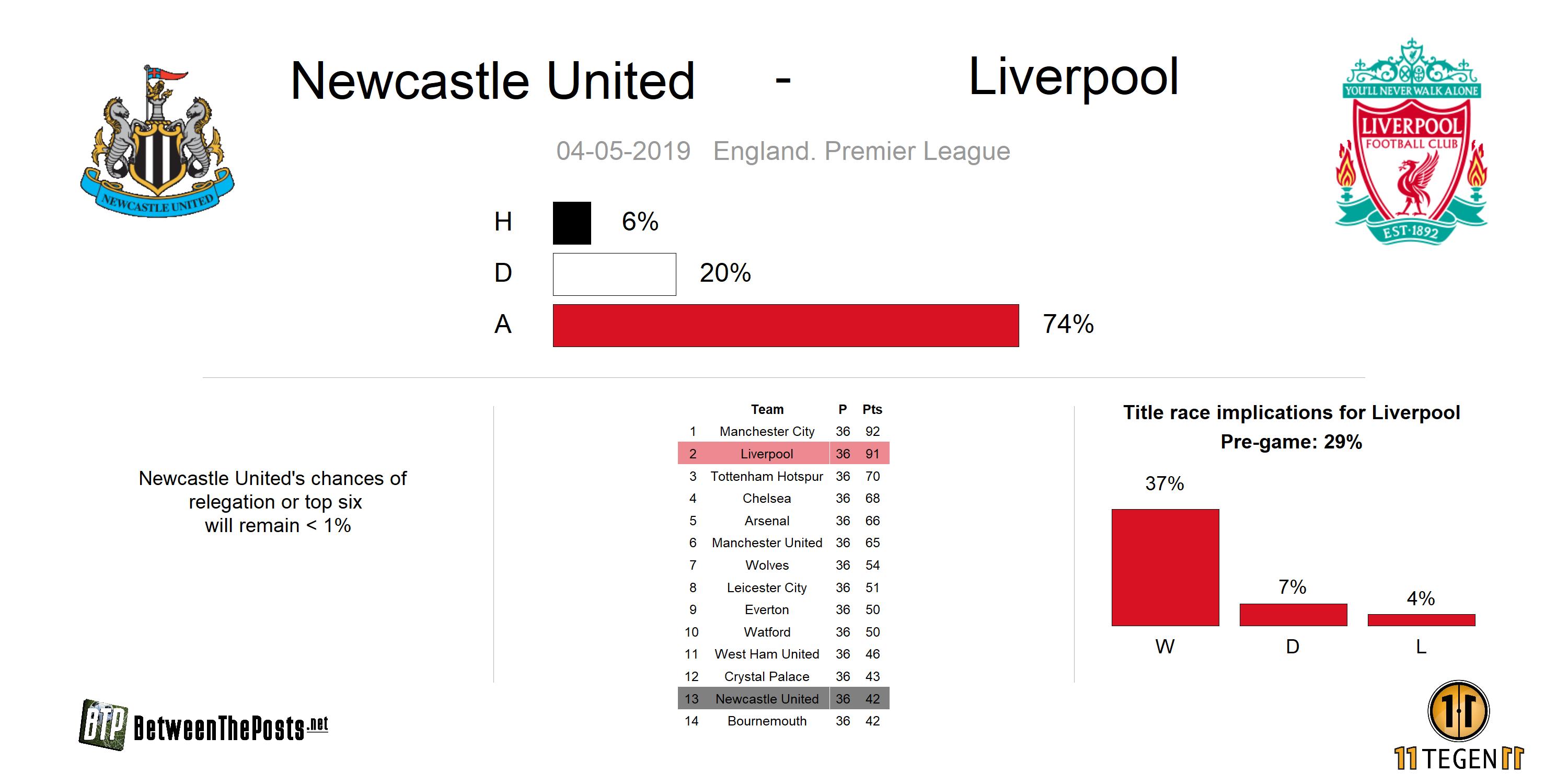 The opening ten minutes began as expected; a low block A low block refers to a team that retreats deep in their own half out of possession, generally only disrupting their opponents around their own box. from Newcastle combatted Liverpool’s heavy possession as Salah struggled for space in-between the midfield and defensive lines. This led to a rather tedious beginning to the game. Andy Robertson, Van Dijk and Wijnaldum looked to open space up via diagonal long balls to Salah but this was markably unsuccessful. Slow lateral passing from the Liverpool midfield failed to shift Newcastle enough to create openings for their forwards. 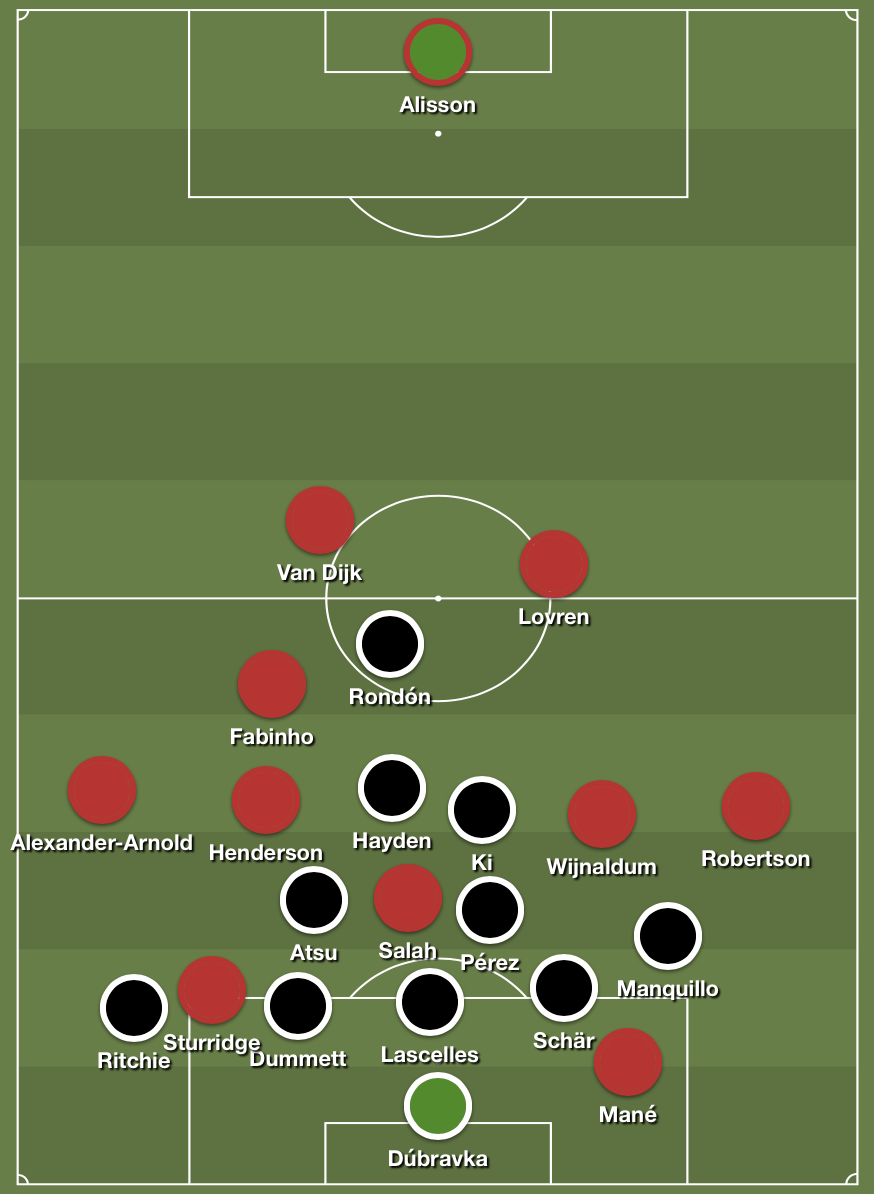 Salah was instantly surrounded whenever he picked up the ball between the lines.

An impromptu corner in the thirteenth minute instantly undid Newcastle’s hard work. The simple in swinging cross found the head of Van Dijk, unmarked, just five yards out. A firm downward header from the Dutch man-mountain flew past Dúbravka. 0-1. The slip from Jamaal Lascelles was the focus of keeper Dúbravka’s anger but poor defending all around that had led to the goal was a real concern.

For the first twenty minutes, any Newcastle attacking output came through Venezuelan front man Salomón Rondón. They relied on the ability of fullbacks Javi Manquillo and Matt Ritchie to get forward as well as the quality of Rondón to retain the ball and take his chances. Seven minutes after they had gone behind, Newcastle had a leveller. A fantastic ball from Manquillo went past everyone, finding Ritchie at the far post who flashed a ball back across. Rondón was on hand to tap in until a fantastic save from Trent Alexander-Arnold halted him in his tracks. The right back had flailed an arm towards the ball, stopping it on the line. Perhaps luckily for him, Atsu was on hand to fire past the downed Alisson.

The game exploded into life

Debates whether England international Alexander-Arnold should still be on the pitch had to wait, the game had been carved open. Pérez operated as an inside forward, aiding the initially isolated Rondón, whilst Benítez demanded his side perform in a 5-2-3 shape when in possession; the Spanish manager had rarely shifted from his highly structured 5-4-1 formation when against top six opponents. This made the game very interesting to watch. 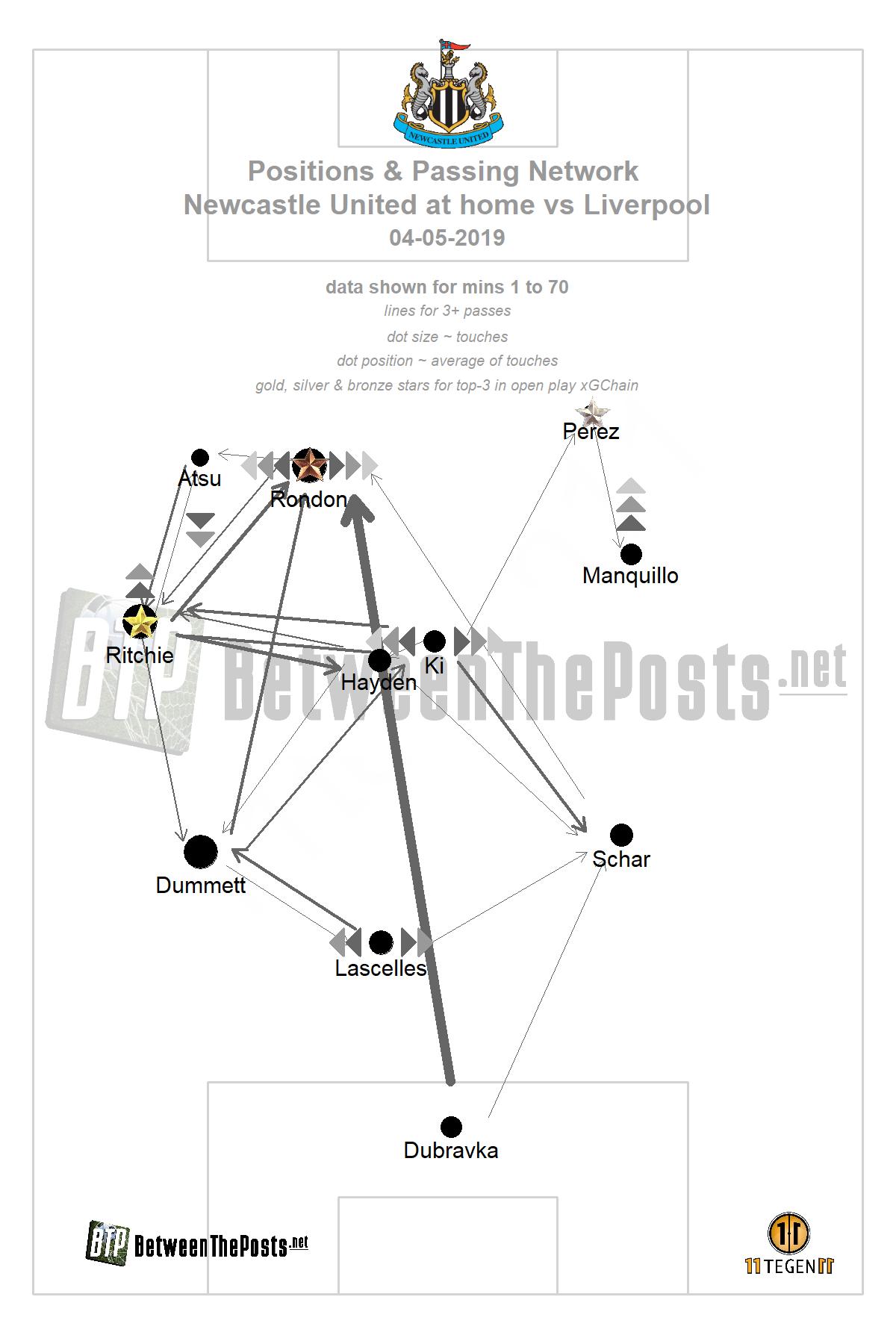 Newcastle’s 5-2-3 shape in possession, with both wingbacks pushing up along the flanks for extra support. Note Pérez’s narrow role in the attack.

Newcastle’s zonal pressing and compacted blocks made it difficult for Liverpool to penetrate and would often gift them dangerous counterattacks. Newcastle nearly even had the lead when Pérez burst into the area, surprising Van Dijk with an excellent piece of skill before firing the ball off the crossbar. The game was alive.

When Ritchie and Dummett doubled up, leaving Alexander-Arnold free on the right flank, the full back made the most of his presence on the pitch, whipping a David Beckham-esque cross into the Newcastle penalty area. Once again, a red shirt was unmarked, this time Mohamed Salah. His guided volley stumped Dúbravka and regained the lead. Liverpool have scored first in fifty-four games since April 2017; they have not lost a single one of them. Newcastle’s short attacking spree ended after the goal and they were left hanging on going into half-time. 1-2.

Ambitious Newcastle going for the win

The second half began with more of a cat and mouse tempo. Perhaps expectant of a rollover following their spell of possession at the end of the first half, Liverpool just took their foot off the gas. That is a costly thing to do in the Premier League, especially at St. James’ Park. Newcastle were never going to give up: “Newcastle are certainly not toothless here”.

Just minutes later and the commentator was proved right. An outswinging corner from Ki was headed away, but only to the head of Manquillo who glanced it back into the area. After Liverpool let it bounce, Rondón was there to strike a beautiful, left footed half volley past the stationary Alisson and into the bottom right corner of the goal.

The famous, electric atmosphere coming from the Leazes End had Liverpool’s title charge on its knees. Jürgen Klopp had to do something and resorted to a 4-4-2 formation. Wijnaldum came off for the mercurial Xherdan Shaqiri and Salah joined Sturridge up top. This presented the risk of Liverpool becoming flat and unable to create significant opportunities, however, they had to get another forward alongside Sturridge. Only time would tell whether this would pay off. 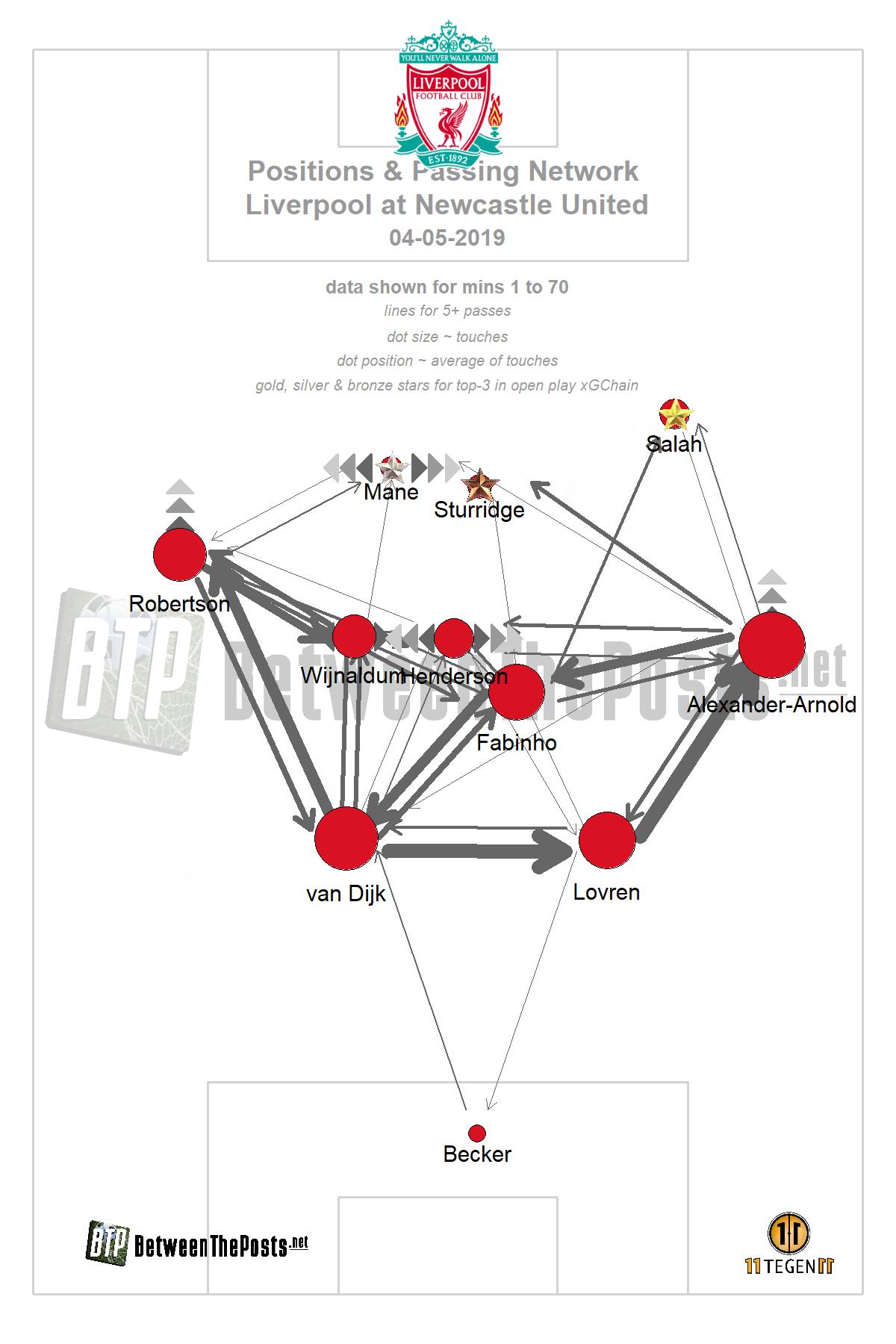 Another example of the importance of Liverpool’s fullbacks for their ball progression.

A solemn incident in the 67th minute allowed the stadium to catch its breath. Dúbravka and Salah collided when going for the ball, the latter suffering a troubling neck injury. The call for a stretcher prompted Divock Origi to rise from the bench and take his place. We can only hope the Premier League top goalscorer is okay. Minutes later the play resumed at its blistering pace.

Klopp’s 4-4-2 formation seemed to only allow Newcastle to break with more freedom, exploiting the gaps in behind Shaqiri and Mané and getting at Liverpool’s fullbacks. As for attacking output, there were no significant chances to be had. The game with all the drama had entered the dying minutes and as Liverpool mounted attack after attack, something was brewing. Newcastle’s countercharges were dangerous but had began to leave them exposed, throwing the game into an aggressive frenzy of attacking football.

The narrative was set. A free-kick just outside the Newcastle area following an unnecessary challenge from Ritchie on Fabinho allowed Van Dijk to venture forward once again, but it was the quality of cross from Shaqiri that would ultimately decide the fixture. His incredible ball glanced off the top of Origi’s head and hit the back of the net. Pandemonium in the Liverpool away end. It had ultimately been a stroke of luck that had decided the result of this game. 2-3. 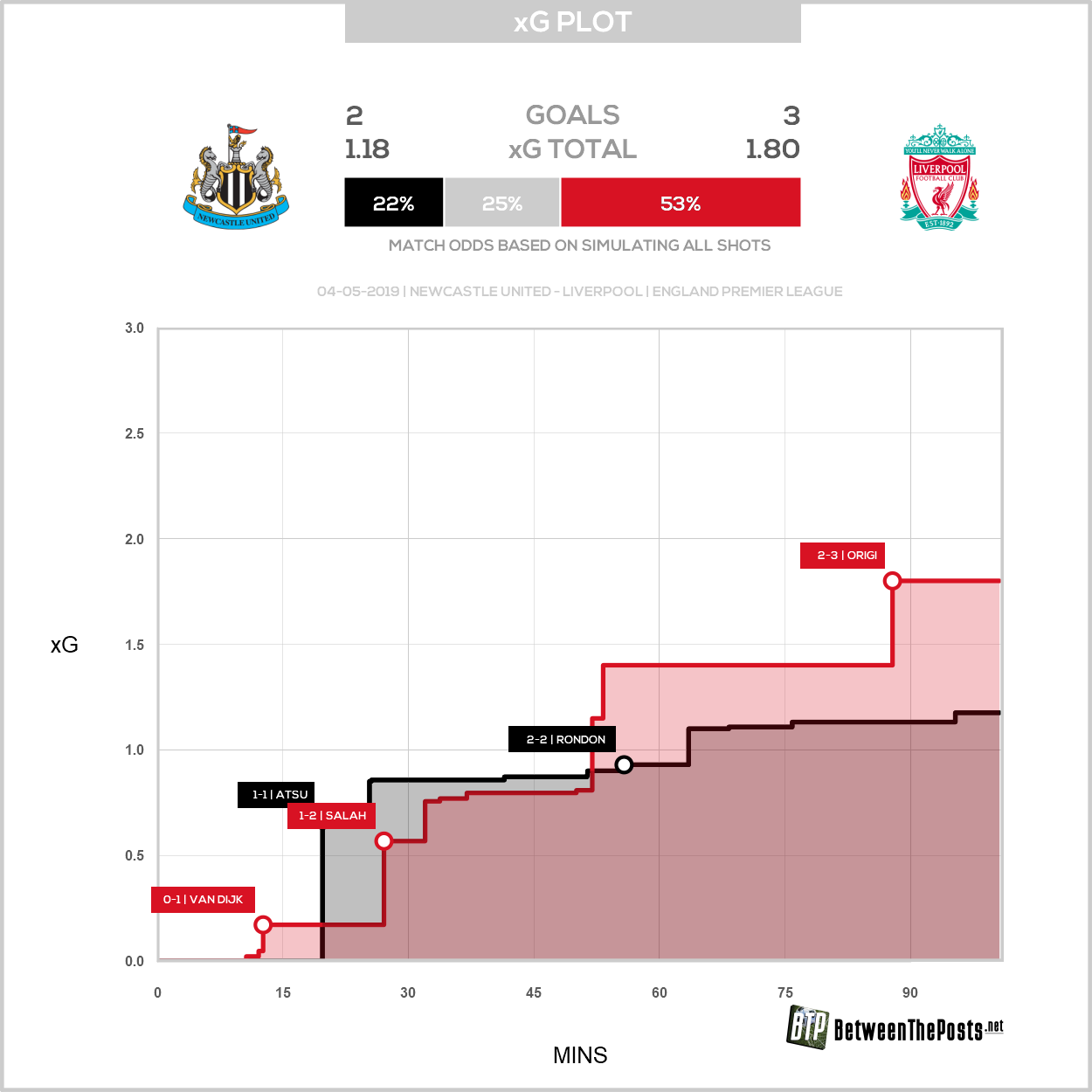 Newcastle fought well and hard. Their flexible 5-4-1 shape caused numerous issues for the overwhelmed Liverpool back four and Benítez can be happy with the effort given in their final home game of the season. They now go to Craven Cottage to face an already relegated Fulham as their season comes to a close. Whilst it is clear that Newcastle have a world-class manager, able to structure a below average side into a solid mid-table finish, without proper investment from high up, progress will be very limiting.

Liverpool had pulled another late winner out of the bag. Their fifteenth goal after the eightieth minute this season gave them the win and piled the pressure on Manchester City ahead of their fixture on Monday night against Leicester City. Jürgen Klopp’s side finish their campaign at home to Wolves, however, before that they have Barcelona to contend with. What an end to the season it will be. 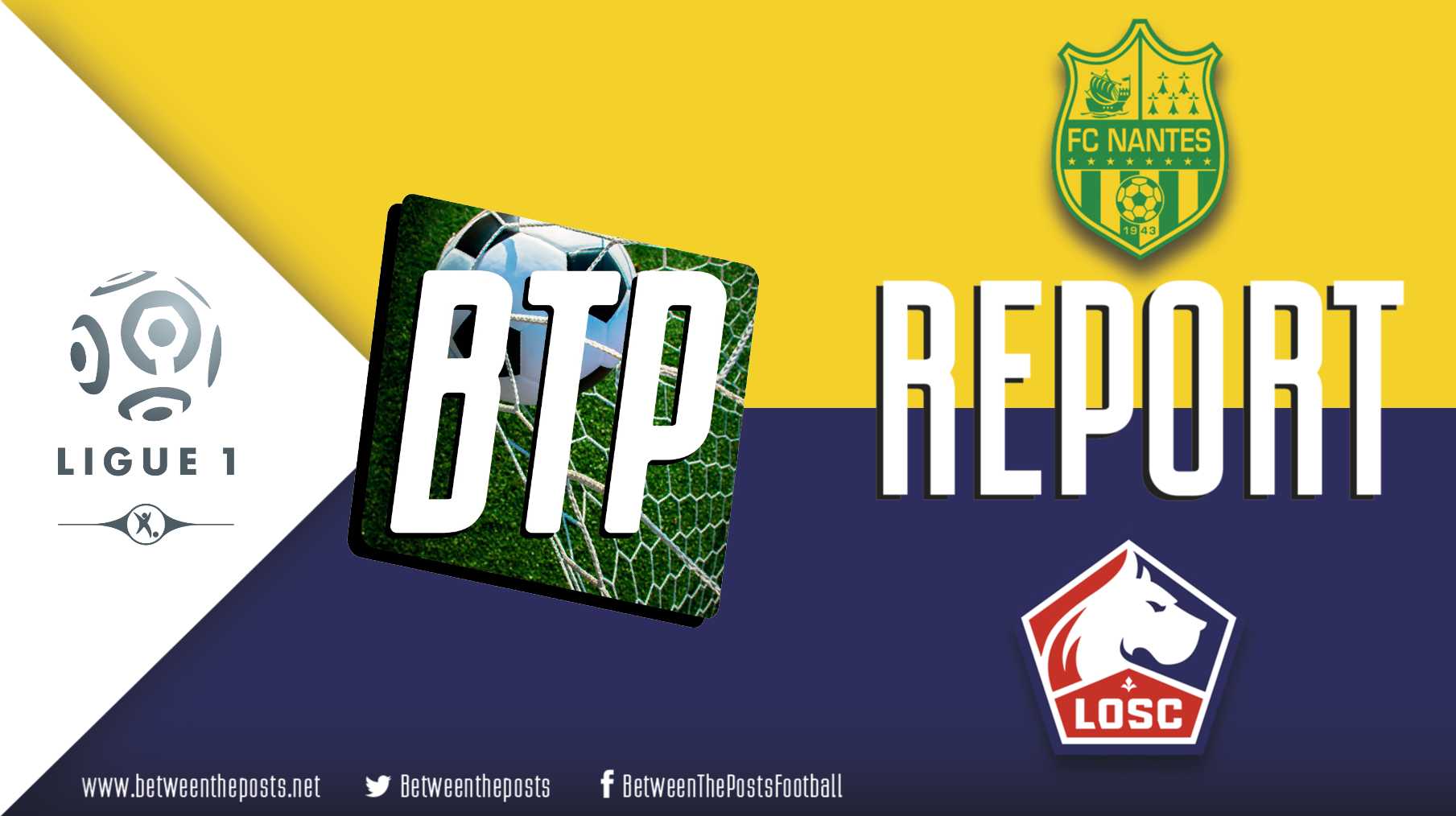 Nantes – LOSC Lille: Lille Graft Out An Important Win In A Close Encounter (0-1) 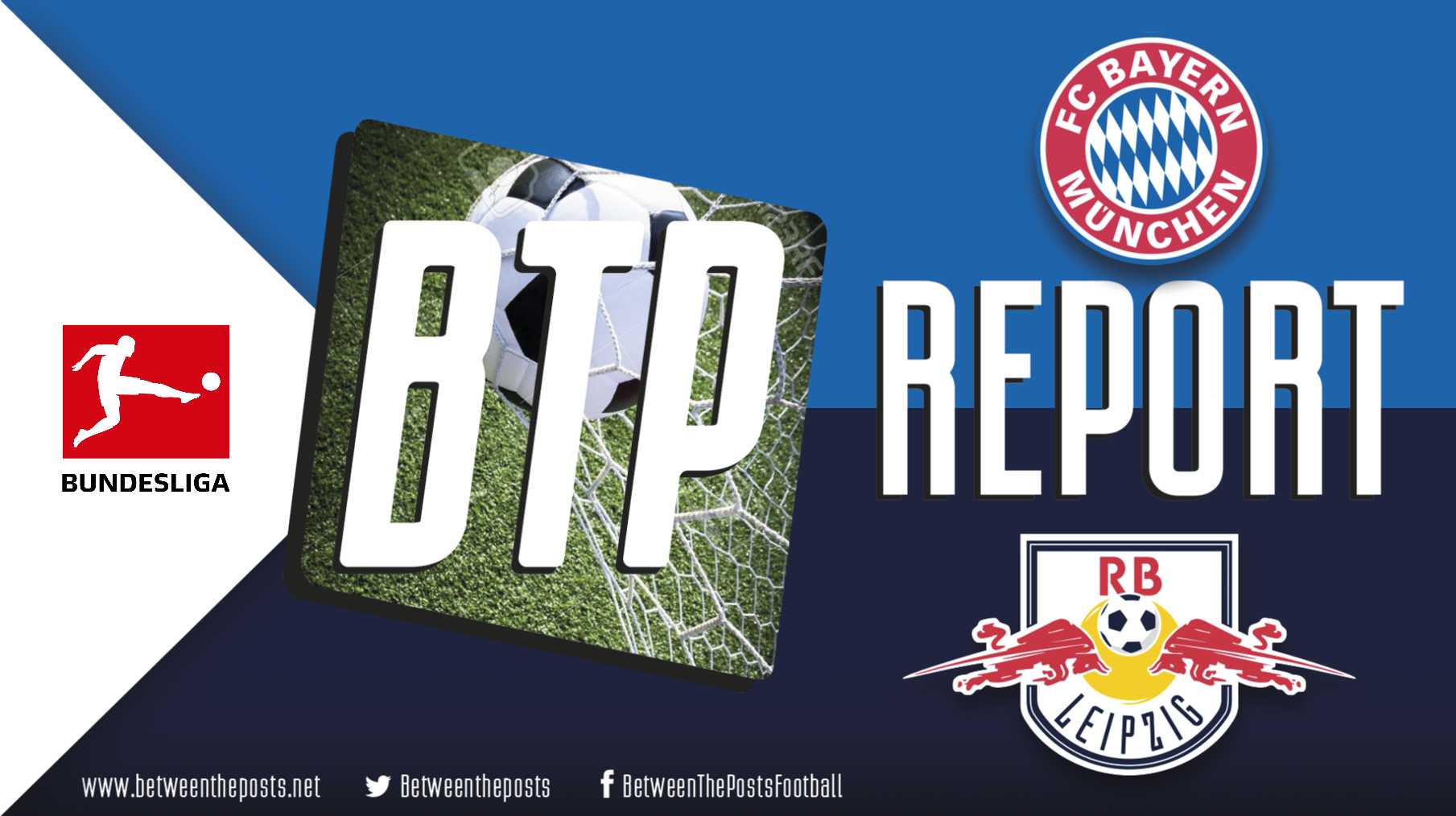