Windsor Park was the perfect stage for the Italians to correct the errors of 2017 and bag a place in the World Cup. Or so it seemed. Mancini’s maneuvers in a 3-1-3-3 shape backfired, leaving his men to confront the horrors of the past in their totality via the playoffs.

Hailed as the mastermind of the Italian revival, Roberto Mancini has turned around the fortunes of his country. Rebirthing this outfit from the ashes of national humiliation, the manager guided his men to victory in the EURO 2020 final. But still unsure of a spot at the World Cup, his transformative work is yet to reach its natural conclusion. Ease to three points here, and Italy would not only be sure of a place at the tournament but also banish the demons that set in motion their pursuit of a new direction.

Ahead of this pivotal clash, Mancini did not move away from his standard 4-3-3 formation. However, the lineup took on a new outlook from the norm in the last twelve months. Giorgio Chiellini, Marco Verratti, and Ciro Immobile all missed out due to injury. What’s more, the manager had long stated his intent to make two changes to the side that drew 1-1 with the Swiss last Friday. Sandro Tonali came in for Manuel Locatelli while Andrea Belotti made way for Domenico Berardi in the attack.

Northern Ireland manager Ian Baraclough deployed his players in a 5-3-2 shape. A strong lineup took to the field even though the hosts played merely for pride, lying eight points behind the playoff place. Three new names came into the fold off the back of a 1-0 victory over Lithuania last time out. Jamal Lewis came in for Shane Ferguson at left wing-back, and Tom Flanagan deputized for the injured Paddy McNair. The final alteration was in the front two, where Gavin Whyte joined Josh Magennis.

The Italians dominated control of the ball, but their setup looked a little different than usual. Their typical 3-2-4-1 offensive structure uses several asymmetries that begin with the back four tilting to the left. Therefore, the left back tends to operate like a winger, whereas the right back holds off to create a back three with the two central defenders. But in this game, the rotation of the back four flipped over. 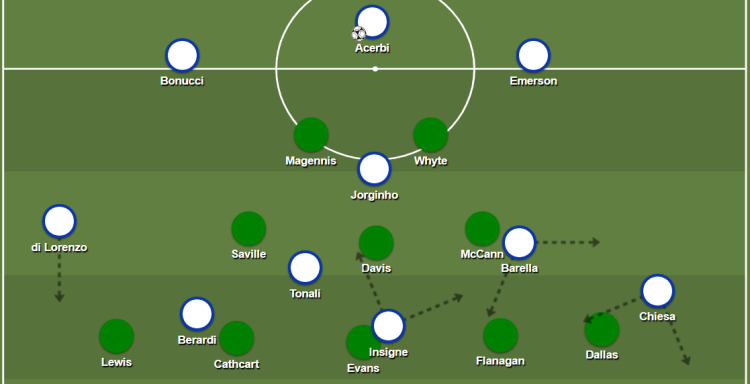 Italy’s 3-1-3-3 offensive structure from the initial 4-3-3 shape with an asymmetric back four tilted to the right, Barella roaming wide to the left to support the ball-retention and Insigne acting as the nine.

So, Emerson stayed deep on the left to form the back three while Giovanni di Lorenzo moved higher on the right flank. The logical consequence was another flipped asymmetry in terms of the positioning of the two wide forwards. Federico Chiesa stayed high and wide, mimicking the role that he usually fulfills on the right from the left. From the right side of the field, Berardi moved into the halfspace.

The adjustments continued in the middle of the field. The left central midfielder and Jorginho often form a double pivot, while the right central midfielder operates higher between the lines. But here, both Nicolò Barella and Tonali were higher than Jorginho, forming a 3-1-3-3 shape. Maybe these tweaks threw the players out of sync, but for whatever reason, something did not look quite right.

Baraclough’s men played their part in unnerving the Italians. On the ball, they almost always relied on long balls to move the play forward. In these rare phases, Italy defended in a 4-3-3 shape where the two wingers looked to funnel the danger into the middle of the pitch. Such ball progression barely troubled the guests, but they would not have foreseen that their attack would similarly run aground.

A 4-1-4-1 formation was a setup touted for the hosts before kickoff but what emerged was a 5-3-2 block. The back five tended to follow the movements of Italian attackers quite closely. Craig Cathcart followed Berardi if he moved outward to the left, and Jonny Evans could end up drifting very wide to cover the lateral moves of Insigne. These duties then forced Steve Davis to drop into the backline. So, the Northern Irish scheme could come at the cost of leaving room in depth to exploit. Perhaps that facet of their deeper block prompted Mancini to adapt the role of the diminutive forward.

The absence of a nominal striker saw Insigne play in the middle of the front three. His agility and very low center of gravity made nimbler in tight areas, allowing him to elude the reach of defenders. From time to time, he would interpret his role as more of a false nine, dropping into the midfield to create overloads near the ball or maybe open room for the wingers to attack behind the last line of the hosts.

8th minute: Italian combination in the final third. Emerson pushes forward, receiving the ball from Jorginho, before driving at the back five. Jonny Evans covers to his right, giving Insigne the cue to pop off the front, swivel and lob a pass over the back five into di Lorenzo’s path on the right flank.

But the Italians looked bereft of ideas throughout the first half. They often looked to target the direct route over the block to break towards the goal. Yet, these moments rarely played out calmly. Neither did third man runs follow up from layoffs to Jorginho, nor did the attackers make complementary runs to scramble their markers. So, Mancini’s men fell foul of a repetitive but poisonous rhythm. Not only were they sterile in control of the ball, but they were also too far hasty in their decision making.

The sole consolation for the away team was that Bulgaria had managed to hold the Swiss to a stalemate at half time. They had kept up their end of the bargain to ensure the European champions would qualify, so would Mancini make the changes to lead his men over the line?

Mancini bit the bullet before the second half, making the first substitution of the match. Tonali was the early casualty, coming off for Bryan Cristante. However, the defensive midfielder could not help Italy settle, leaving the two teams in deadlock. To make matters even worse, events at Lucerne had radically altered. Two goals in the space of ten minutes had placed the Swiss into a commanding lead. Now even a single goal win might not be enough to make sure of the top spot, but the Northern Irish had rendered the visitors impotent to a point where even that outcome seemed highly unlikely.

Goals were in urgent demand, and Mancini made another change to boost the supply. In the 64th minute, Belotti entered the fray, coming on in place of Barella. Italy then abandoned their usual 4-3-3 shape. Now they switched to a 4-2-3-1 system, where Jorginho and Cristante formed the double pivot. And the desperation did not end there. Moments later, two cornerstones of this outfit departed the field: Locatelli and Federico Bernardeschi replaced Jorginho and Insigne.

A final push saw Emerson come off for Gianluca Scamacca, forcing Bernardeschi to move to left back. The fullbacks bombed on and could come inward to create more dynamic isolations for Chiesa to drive 1-on-1 at his opposite man. Meanwhile, the double pivot tended over to the left halfspace as its two members alternated as a higher presence between the lines. But it was the hosts that came closest to scoring on the break, reviving Italian nightmares of 2017 at the final whistle.

🗣️ "Every game means something to them." 💚

Ian Baraclough is proud of the shift his Northern Ireland players put in to hold Italy and their attitude going into the game 💪 pic.twitter.com/hDjuuzyWHL

Given that this game was a dead rubber fixture, Baraclough will see this result as an excellent end to the qualifying campaign. His men may have come up short in their efforts to get to the 2022 World Cup, but they have played a decisive part in the fate of one of its emerging favorites.

Scrutiny on Mancini will center around his structural choices: the wisdom of moving away from the 3-2-4-1 setup in such a critical clash is questionable in light of the lack of automatism his men showed on the ball. Yet, this debate, and the intent behind Mancini’s change of tact, is only part of a broader narrative on struggles Italy have faced since the summer. Flaws evident at that stage of the project are all the more apparent now, but a place at the top table demands continual evolution. By March 2022, Mancini must have revised the final chapter of his work to construct a fitting ending in the playoffs. 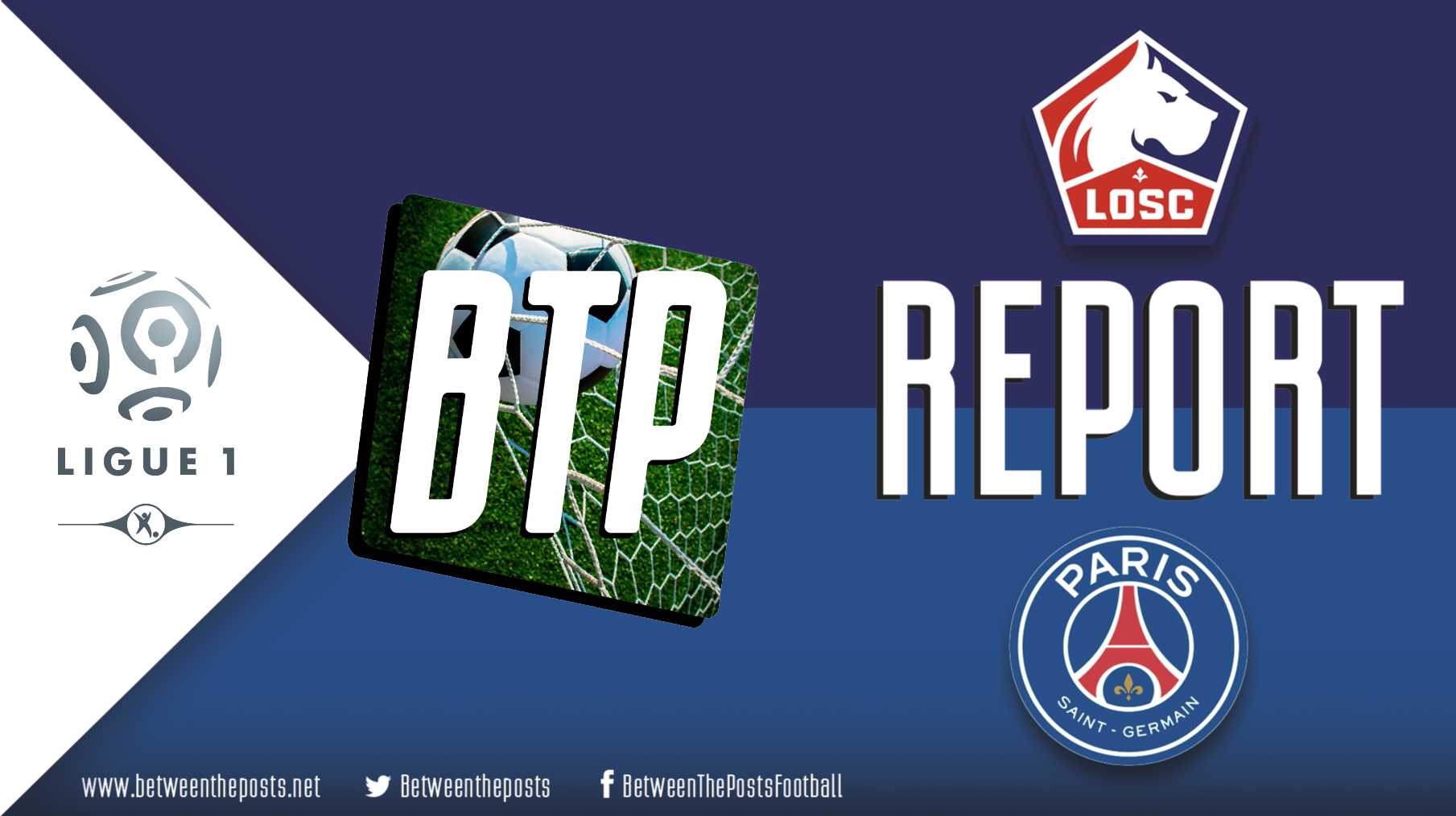