In a not so brilliant, yet very important game, Marseille managed to be solid enough to get the best of Saint-Étienne and win the game 1-0. Benedetto scored on Marseille’s first and only real chance after half an hour of play, which was enough to seal the game.

Marseille and Saint-Étienne are two similar clubs. The most successful teams in the history of Ligue 1 with nine and ten trophies, large and historical fan bases, and now competing for the same spot in the League – around fourth or fifth place. If we dive into further details, we can even notice that both clubs have started the season with new managers, after respected and successful coaches left (Rudi Garcia and Jean-Louis Gasset). Even the structure of the squads is pretty similar, with former stars (Payet, Debuchy, Cabaye) surrounding decent level Ligue 1 players.

Marseille and Saint-Étienne had four points before the game, but with reversed dynamics. OM started the season with a loss against Reims, then they drew the game against Nantes before winning the the Mediterranean derby away against Nice 2-1.On the other hand, Saint-Étienne won their first game, but then they drew against newly promoted Brest, before losing to the last season’s vice-champions Lille. The trip to Marseille therefore did not come at the perfect moment for them.

Having got rid of overpaid players like Rami and Gustavo, André Villas-Boas lined up his team in a 4-3-3 system, with Strootman as lone holding midfielder, Payet and Sarr on the wings with their new signing from Boca Juniors Benedetto upfront.

The visitors lined-up in a 3-4-1-2 structure that started the season, with Boudebouz as number ten. This formation gives the flexibility to either block off the center and press on the sides with their wing-backs or drop off in a low block completely, forming a 5-2-1-2 / 5-3-2 organization.

The game started with no chaos or fury at all, both teams seemed very organized and determined to apply the game plans. Despite being at home, Marseille did not have the majority of l possession,as they were quite sensitive to Saint-Étienne’s aggressive structure.

Saint-Étiennepressed pretty high at times, and those quick ball recoveries allowed the team to spend more time on the ball – 57% possession during the first thirty minutes. 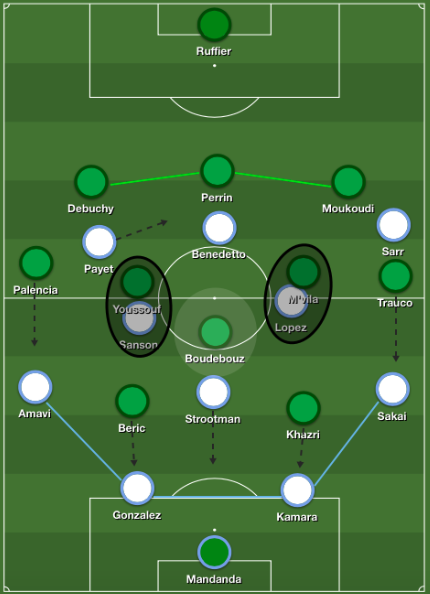 Saint-Étienne’s 3-4-1-2 shape would naturally fit the opposition’s 4-3-3 set up when pressing.Both strikers controlling center-backs, the number ten would be in the same zone asStrootman, the wing-backs ready to adjust their pressing position according to the ball’s side against the fullbacks. Because they were never pressing at the same time, Saint-Étienne always kept enough players behind the ball.

It is worth noticing that Saint-Étienne’s coach, Ghislain Printant, asked his double pivot (Youssouf and M’Vila) to strictly mark the duo of Lopez and Sanson to allow no option through the central corridor of the field, which was quite disturbing for the marseillais and therefore very efficient.

But as a reader of Between the Posts, you know French football – and if you did not, now you know that a high pressing plan never lasts very long. Saint-Étienne would also defend in a more medium and compact way, but it was still efficient in preventing Marseille from progressing the ball upfield. Marseille tried to create movements,with Payet tucking in from the number ten position, Sanson being very dynamic to run into space and Benedetto dropping as false nine, yet it was difficult to penetrate the opposition.

When Saint-Étienne were on the ball, Marseille defended in a 4-1-4-1 shape, they held a medium block, A medium block refers to a team that retreats in their own half out of possession, generally only disrupting their opponents some way into their own half.however, the central midfielders were the ones likely to step out and press the man on the ball. But given how deep and close to the center-backs Strootman was, their approach created huge gaps in midfield. 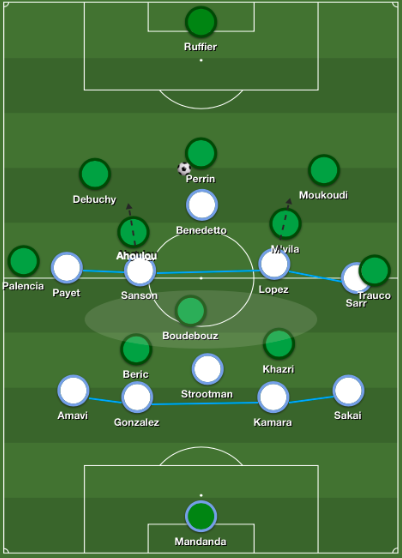 Marseille’s 4-1-4-1, the will to control the double pivot would be a double edged strategy and create space in midfield.

In those conditions, the challenge for Saint-Étienne was to get past thepressureand exploit that space between the lines with technical players like Boudebouz or Kahzri. It was very often the case but not really exploited at full potential.

Indeed, the thirty first minutes were remarkably unproductive offensively. Both teams lacked imagination and precision, good actions were quickly spoiled and the defensive lines had a very careful approach to not be caught out of position. The only shot from Saint-Étienne during this sequence came from the center-back Perrin, on a dead ball situation, off target.

A break, a goal and Marseille are more dominant

The game went on like this. Around the 28th minute, Aholou took a blow to the chest on a tough challenge and fell, it took a few minutes for him to get back on his feet and got replaced by Zaydou Youssouf.f. The tempo of the game got affected and after the interruption, there was a moment of hesitation. Saint-Étienne seemed to have lost their concentration, and Marseille took advantage of it when Benedetto scored in minute 33. The goal started with a good action, an explosive one-two combination between Sarr and Benedetto. As a result, the winger had a path to make a rush down the right flank on forty meters, and eventually it was Payet to assist Benedetto who had followed the action up to the penalty spot. First shot on target in the game: 1-0 for the hosts!

After the goal, one could have expected some reaction from Saint-Étienne, but they looked a bit stunned and dizzy from the opening of the score. As a result, Marseille took over the game, extended their sequences of passes and got 56% of the ball possession. The team looked more relaxed, they would get past pressure easily and Payet was also more influential in play. Yet no real chance came during this moment of domination, meaning the game was still level at half-time.

Second half: Marseille manage to control the game as Saint-Étienne run out of fuel

The second half began with the exact same tactical patterns and a largely shared amount of possession. However, Saint-Étienne started to play better and created several interesting shots around the 60th minute, as you can see on the expected goal The amount of goals a team is expected to score based on the quality of the shots they take. plots of the game. Unfortunately for them, those shots often found the leg of a defender to deflect the ball off target.

Saint-Étienne’s momentum ended with the severe tackle of Amavi on Palencia that got reviewed by VAR for a few minutes, Marseille’s left back miraculously avoided the red card, considering how swollen Palencia’s ankle was. The Spanish wing-back could not carry on and got replaced by Yohan Cabaye, a midfielder.

After the entrance of Cabaye, Saint-Étienne switched to a 4-2-3-1 shape for the last twenty minutes. Youssouf was an actual right winger, Debuchy got back to his traditional right back position and Bouanga – who had substituted Beric upfront – was the left winger.

Nevertheless, they were never really in a position to create danger anymore, the last interesting shot for les verts came minute 78, when Mandanda almost failed to control a long shot by Youssouf. Then Marseille were happy to just manage their advance, no risk offensively to not be punished defensively. 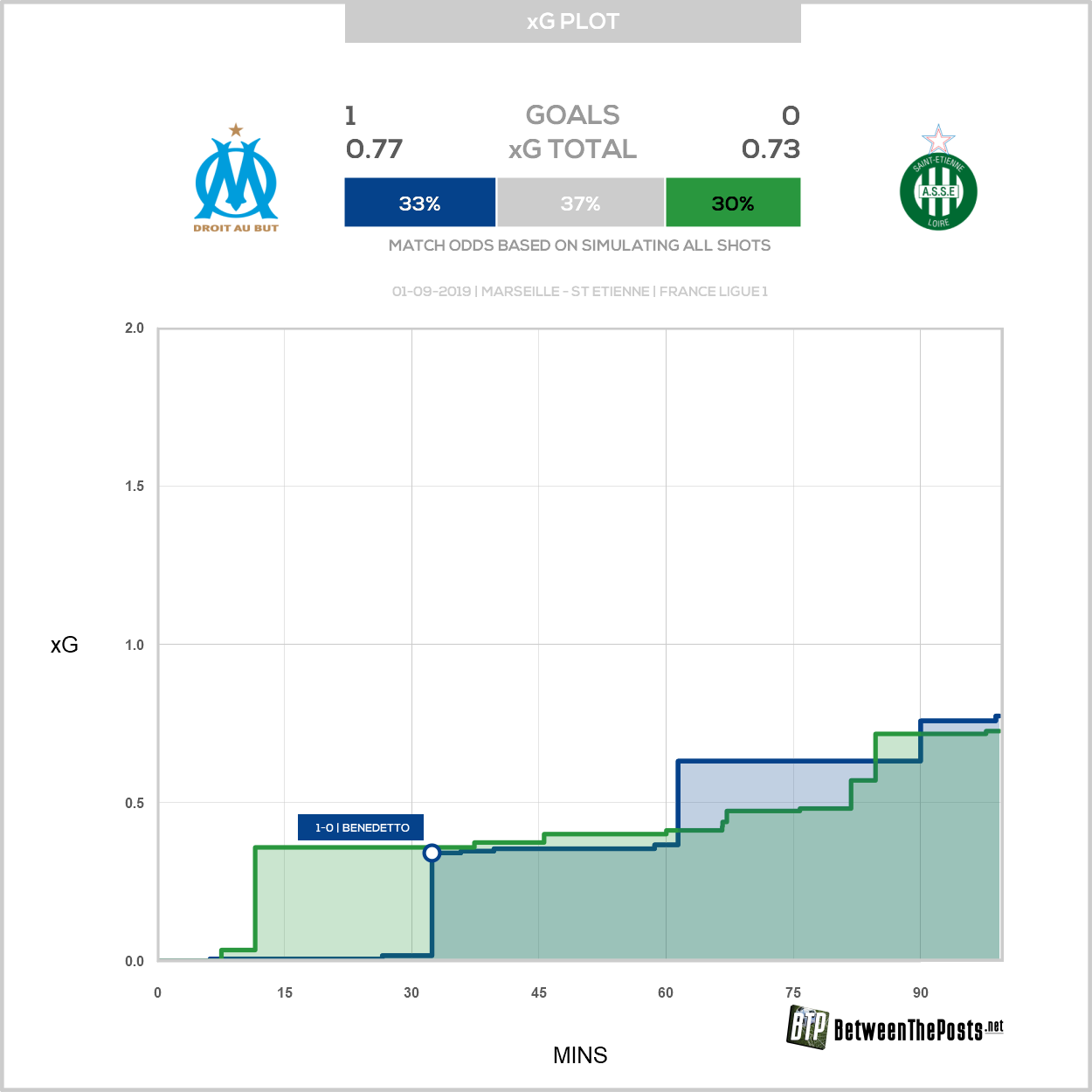 Despite both the historical weight and the current importance of this French football clash, we cannot say it was a fun game to watch by any stretch of the imagination. Talent was there, but the lack of creativity and risks upfront really limited the opportunities to create good offensive situations.

Once again, our xG plots speak volumes about this issue, with Marseille creating only 0.84 xG and Saint-Étienne 0.48. Saint-Étienne’s ambitious plan in the first half did not get rewarded.

Finally, Marseille needed to keep on reassuring themselves and confirm the return of a more positive dynamic. Job done, let’s see how the team can perform after the international break against Monaco, another competitor of their level. 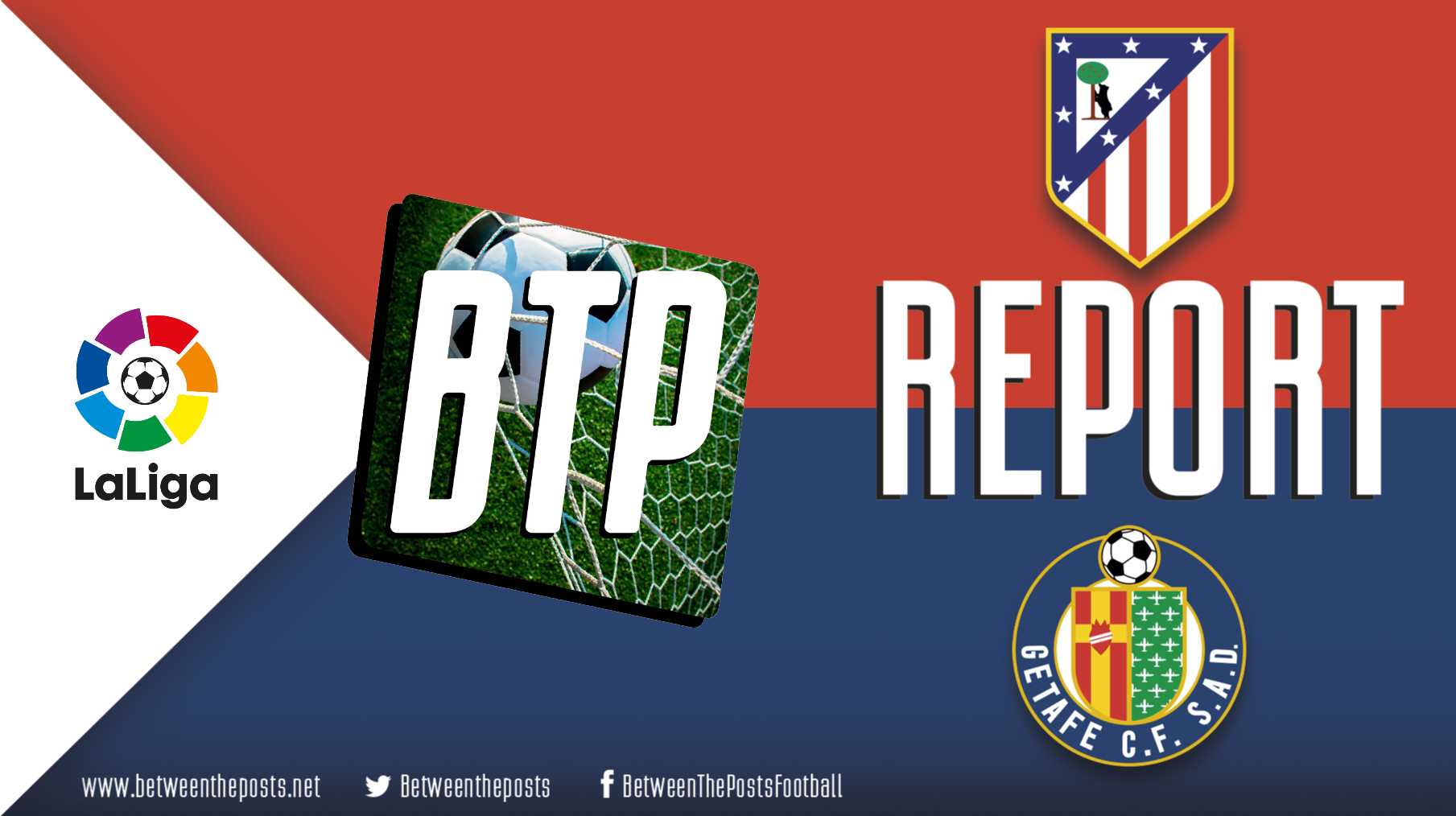 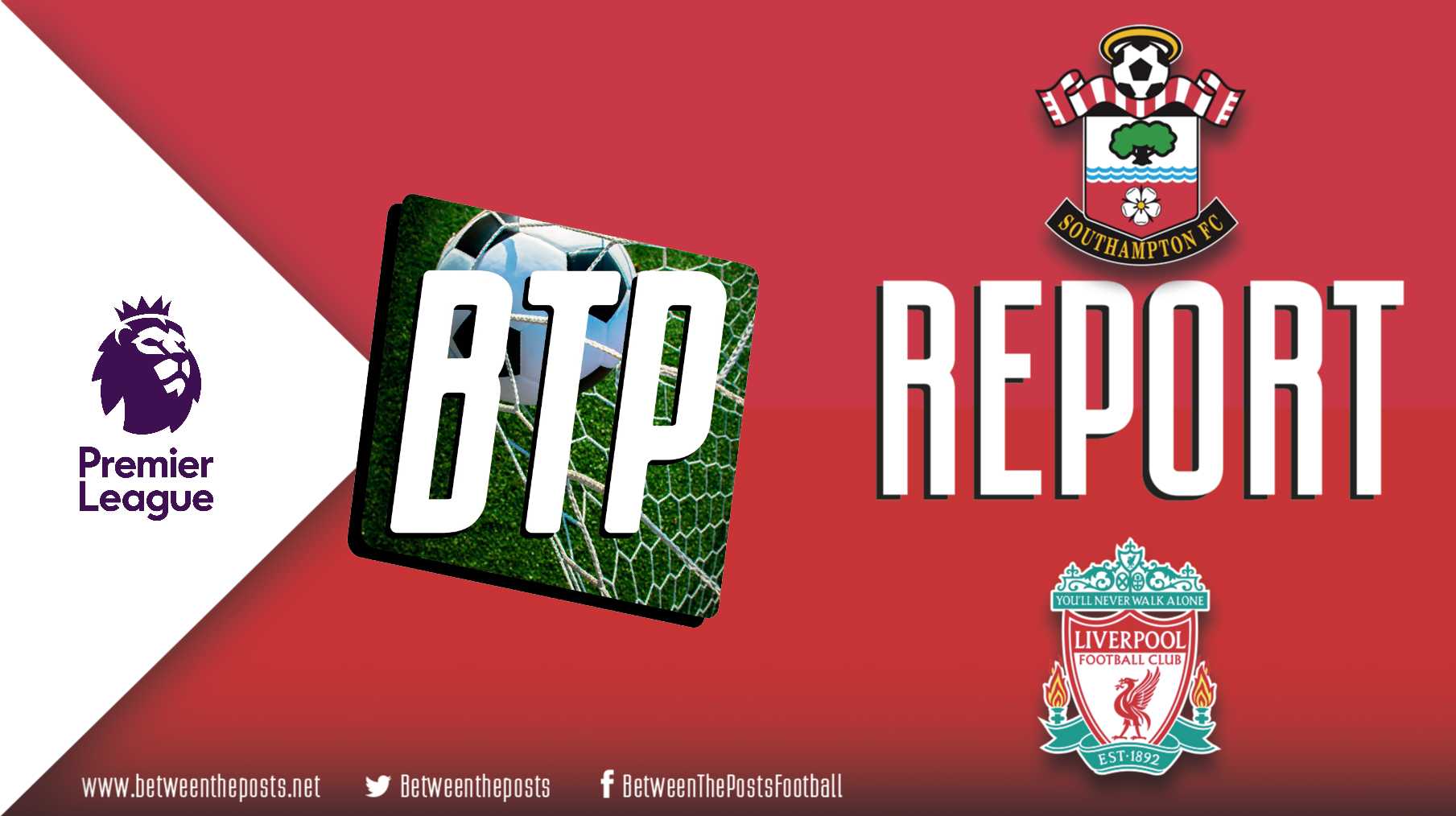