In similar fashion to their big win at the Etihad Stadium two months ago, Bruno Génésio’s aggressive defensive approach paid dividends. Never looking to retreat at the hands of City’s relentless ball control, Lyon managed to comfortably deal with their opponent’s attempts to pull them apart and subsequently got the better of the English champions, despite the level score line.

Following their big derby win against AS Saint-Étienne on Friday night, Lyon were in high spirits. Génésio made just one change from the side he fielded last weekend. Striker Moussa Dembélé dropped to the bench and Maxwel Cornet came into the side.

Man City only needed a point to secure qualification into the knockout stages. From the eleven that easily put aside West Ham United 4-0 on Saturday, Guardiola made three changes; Nicolás Otamendi made way for John Stones, Fabian Delph was dropped for Oleksandr Zinchenko and Riyad Mahrez replaced İlkay Gündoğan.

City have dipped in and out of the back-three setup so far this season but tonight’s formation was solidly a 3-4-3, matching up Lyon’s shape, since they also play with three central defenders. 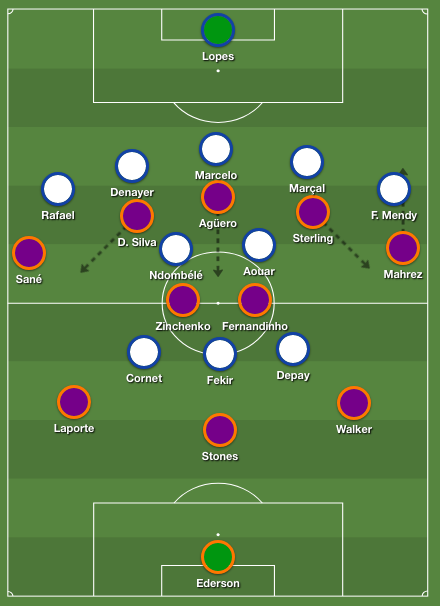 City lineup in their 3-4-3 in possession, which matches Lyon’s setup.

Most sides surrender to City’s possession game by sitting in their own third If you divide the pitch in three horizontal zones, the defensive third is the area closest to a team’s own goal. and giving up pressing City’s build-up altogether. Lyon, on the other hand, took a slightly different approach, one that has been key for teams looking to get the better of Guardiola’s City in the past season-and-a-half.

The front three were laid out flat, ahead of the holding midfielders, Tanguy Ndombélé and Houssem Aouar. Lyon’s midfield duo was never troubled by Stones playing into the freed-up midfield pairing of Zinchenko and Fernandinho. It is almost like they welcomed it, because Ndombélé and Aouar could immediately pressure the ball-carrier in these situations.

With three forwards initially positioned so high, it gave Lyon a great opportunity to squeeze the vertical spaces when it counted. With the last line consisting of five attackers versus five defenders, the marking job was fairly straightforward. Because of this, City never managed to find ways of opening space in behind for their teammates since they were all being closely marked.

So, with David Silva coming wide from his inside left position to receive, there was now no inside presence. In these situations, the ball-near holding midfielder for Lyon (Ndombélé) would go to press Silva. Now with only Leroy Sané trapped wide and Agüero being an isolated, un-supporting figure behind the Lyon defense, Silva had no way forward.

Even the inside option into Zinchenko was being well cut off. Down City’s left, where most attempts at building up happened, Cornet and Fekir would follow the ball back and narrow the angles into the center. So not only were there no clear options ahead, but Silva was now having to play back to Laporte. Naturally, this gave Lyon time to recover their defensive shape and perform the same trick again.

As the half developed, Sané did begin to rotate inside ahead of Silva receiving wide, however, it still did little in the way of offering any real route of progression.

The most notable lacking factor of City’s possession passages were the lack of vertical rotations. What this side have been good at under Guardiola is rotating their midfielders and attackers to exploit open spaces behind the opposing defense. Here, the forwards were dragging Lyon’s defenders away and leaving spaces, but neither Zinchenko nor Fernandinho were gambling on exploiting it by making runs from deep.

With all of City’s ball play laid out in front of the Lyon defense, it made it easy for them to step out, to be aggressive, to suffocate spaces and to deny them access into dangerous areas. 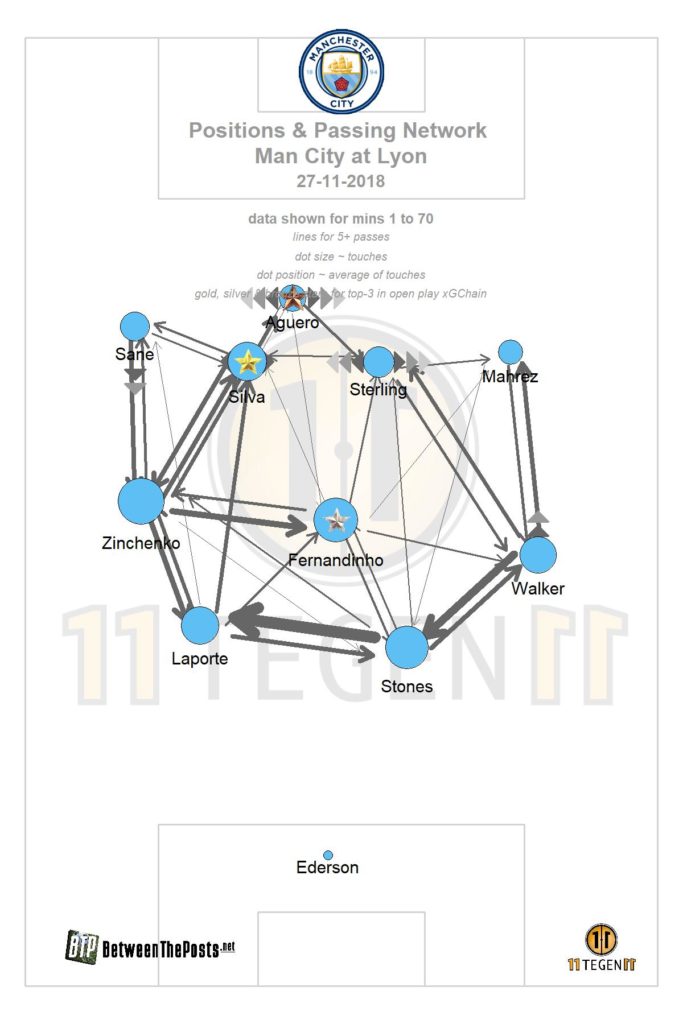 When Lyon had the ball, Ndombélé and Aouar would quite commonly split; the latter would position themselves just ahead of the other. This made things slightly less straightforward pressing-wise for City. Whilst the visitors reverted to a 4-1-4-1 shape in defense, the aim of the advanced midfielders – in this case, Silva and Raheem Sterling – was to press against the Lyon holding midfielders. In the meantime, the wingers would start their press on the outside so that when they pushed up, they could block access into the wing-back on that side.

The main problem City had was that they simply could not get close to either of the two midfielders. Not only was Ndombélé receiving so deep by collecting it right off the toes of Marcelo, but Aouar was also positioned centrally. As a result, neither City midfielder could really step across without leaving a huge horizontal gap in the midfield.

To make matters worse for City, Lyon’s inside forwards were able to freely drift away from the opposition’s backline to receive from behind either of their two advanced midfielders. The reason for this being that Lyon dotted across the channels of City’s back-four with five players in total. If City’s players  it meant stepped out to press the dropping forward, another could exploit this by making runs into the huge gap now created. 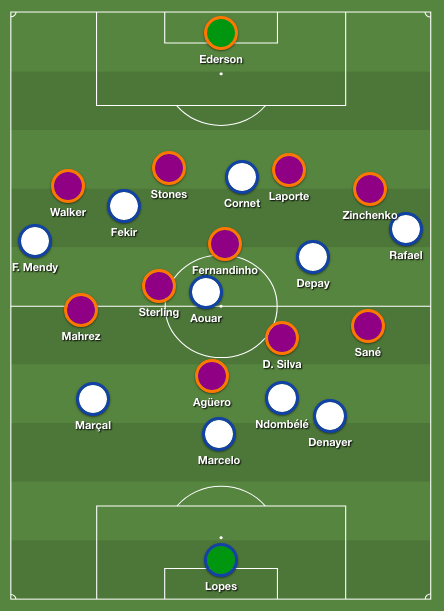 Depay pictured in space behind City’s midfield in their wide open 4-1-4-1 defensive shape.

Pep Guardiola’s extreme playing style always leaves space behind his defense. The fact his team is one of the best counterpressing After losing possession, a team immediately moves towards the ball as a unit to regain possession, or at least slow down the pace of the counterattack. sides in Europe makes up for this, as the ball is often won back quickly before the opponent can exploit these spaces. Ndombéleé and Aouar were key for Lyon in this match because of their ability to keep possession even when pressed, and find a way forward with a pass or dribble. The duo seldomly lost the ball, even when pressed by several City players.

In the buildup to the opening goal of the match, this also proved key, as Ndombélé wriggled free of any pressure with the ball before drawing in hasty challenges. After winning the foul, Marcelo quickly launched the ball up from his own half to Depay on the edge of City’s penalty area. His switch found Cornet. The wide attacker was then given the space to cut in onto his left and blaze it into the far, right corner.

City scored an equalizer shortly after Lyon got the opening goal, though. It feels a bit unfair that it came from a set piece, as Raheem Sterling whipped in a free kick from the right hand side, that was beautifully met by Laporte. In the 62nd minute, the game was level again.

From the second the second half started, it became clear Guardiola temporarily moved Zinchenko out of the center, to a more wide role, to support the left-sided attacks. It was the same kind of 3-4-3 shape, except with the Ukranian fielded wide left to help overload that side. And, against, tiring Lyon legs, the attackers were not tracking back so much anymore.

This led to one chance where the left-back fed it cleverly into a tight space for Agüero, who brilliantly manufactured some space for himself but his square ball attempt across the six-yard box – that would have almost certainly resulted in an easy tap-in whilst the game stood at 1-1 – was crucially blocked.

Lyon were not ready to give up yet, though.On so many occasions would Ndombélé and any one of the forwards, all of whom switched freely between themselves, combine around Silva to progress. For the home side’s second goal of the night, they managed to put this into good use. Depay, on the left this time, found the same space he had been finding in the first half. With time to turn and play the next pass, it was easy for him to slide Cornet through. The wide attacker obliged by slotting it through the legs of Ederson.

Lyon were leading again, but once again could not enjoy it for long. Only two minutes later, in the 83rd minute of play, City equalized again, this time from a corner kick, taken by Riyad Mahrez and headed in by Agüero. The remainder of the match did not feature any big chances, which meant the game ended level.

Génésio’s men had dominated the opening period, creating big chances for themselves. They were given their rewards through more clinical finishing in the second period but it still was not proving to be enough. Although, unlike with the home side’s goals, neither of City’s stemmed from key trends of their attacking play.

It was a night for French starlets in Lyon, as Laporte, Ndombéleé and Aouar all shone for their respective sides. Ndombélé, in particular, ran the show for Lyon and has played a major part in seeing his side come away from their two matches against Man City unscathed. Lyon now only need to avoid defeat in order to progress to the knockout phase.

Doubts over City’s credentials in this competition will continue to be raised with questionable results like these. Their league form is astonishing but, much like Paris Saint-Germain, their season success will hang from an ableness to show up in these big occasions. 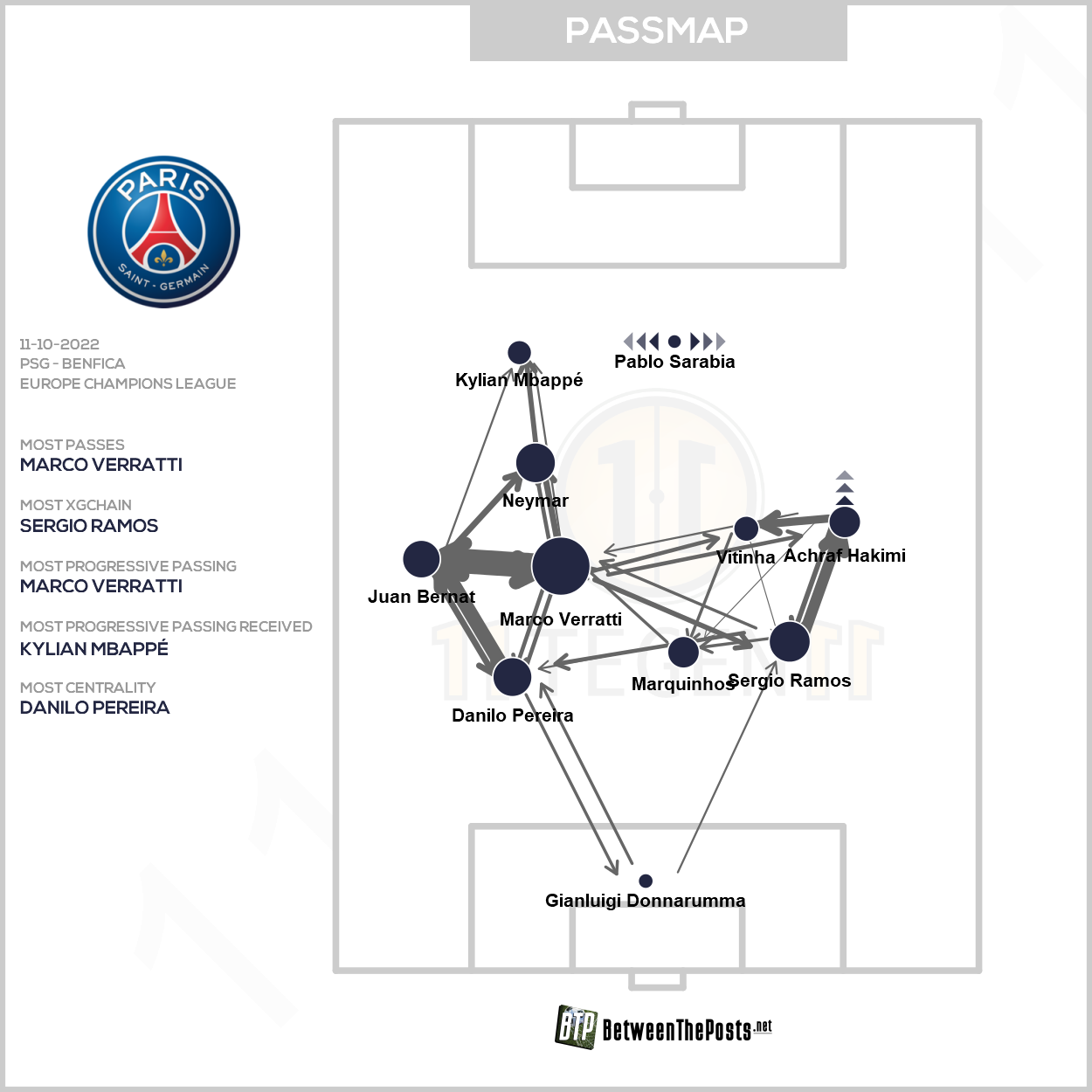 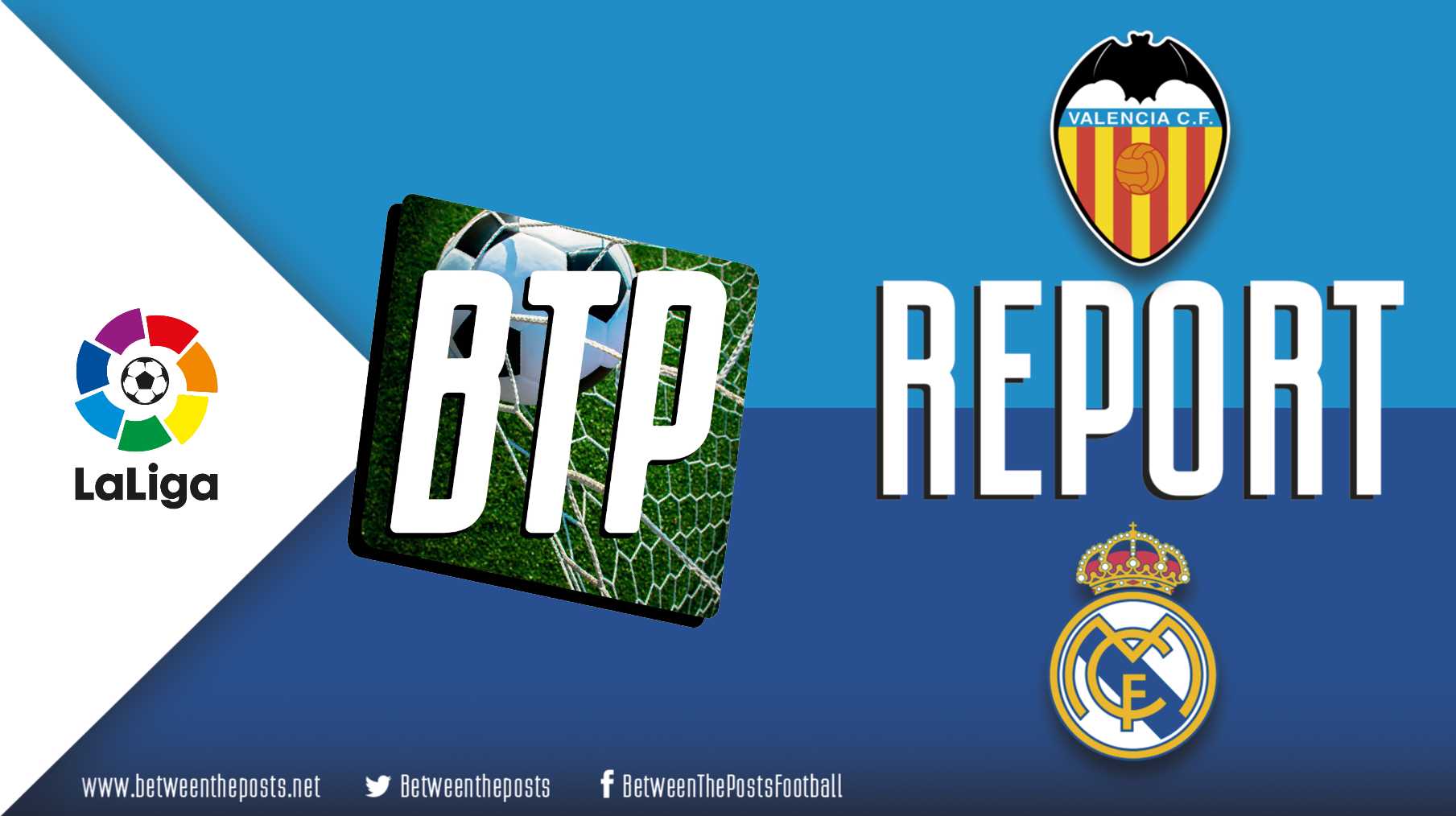