Olympique Lyon capped off a tremendous week in style as they beat rivals Olympique Marseille at home in le Choc des Olympiques. The game was more entertaining and end-to-end than it was high quality. Brilliant individual performances and a clear difference in offensive efficiency set the two teams apart.

Lyon set up in the 4-4-1-1 formation that proved successful on Wednesday in Manchester. They made two changes to the midweek line-up; Leo Dubois replaced Rafael at right-back, and more importantly, Bertrand Traoré replaced Maxwel Cornet on the right side of midfield. 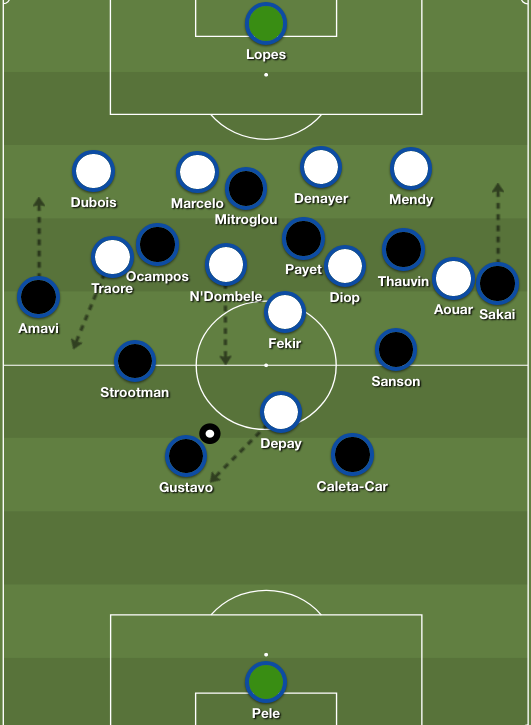 Marseille’s build-up and Lyon’s 4-4-1-1. The ball is displayed at the feet of central defender Luiz Gustavo.

Marseille ineffective with the ball
Marseille slightly dominated possession, but failed to turn this into meaningful offense. Their positioning in possession did not allow them to progress the ball up the field and penetrate Lyon’s defense. Wide attackers Florian Thauvin and Lucas Ocampos moved infield and operated in the halfspace If you divide the field in five vertical lanes, the half spaces are the lanes that are not on the wing and not in the center. Because there is no touchline like on the wing, players have freedom to go everywhere. But this zone often is not as well-defended as the very center. This makes it a very valuable offensive zone to play in and a lot of chances are created by passes or dribbles from the halfspace. in Marseille’s build-up. This meant that all of Marseille’s width in possession came from the full-backs, who were positioned on either touchline in a relatively high position.

Meanwhile Payet – nominally playing the ‘10’ position – had license to roam and often positioned himself as a second striker alongside Mitroglou. In Marseille’s own half build-up, holding midfielders Strootman and Sanson would often come into wide positions alongside the centre-backs to offer passing options. This structure was very ineffective for a few reasons.

First, a lack of presence in the centre of the pitch in between Lyon’s midfield and attack. Perhaps Marseille manager Garcia shied away from central midfield passing after seeing the way Lyon’s press collapsed on Manchester City’s holding midfielder Fernandinho when he received the ball in that area on Wednesday.

Lyon’s plan during Marseille’s build-up was to place strikers Memphis Depay and Nabil Fekir on each centre-back after the ball was played short to them. In addition, in midfield two Lyon players tightly marked Strootman and Sanson. In theory, this means Payet should have been free between the lines, but Marseille did not have the time and space on the ball to find him.

Another problem for Marseille was the struggle of their rather narrow offense to create gaps in the back four for Payet, Thauvin and Ocampos to exploit. Lyon’s wide midfielders did a very good job of screening passes to the aforementioned dangermen. Combined with Mitroglou’s lack of pace, this meant that they became predictable and easy to defend against.

An option to find space against a compact defense is a quick switch of play. At times Marseille tried this strategy, but their switches were often too predictable and the cross field passes were to the players’ feet rather than to the space in front of the fullback. Though theoretically a good option, Marseille lacked guile and technical quality in the centre of midfield to make efficient use of cross passing. Passes were often unthreatening, movement to support was poor, and they lacked ability to hold the ball in one-versus-one situations.

Game is tied at half time, even though Lyon looks better
Lyon’s attacking play followed the same template as was explained in the report of their unlikely win at Manchester City. Most of Lyon’s attacks came down the right-hand side, where they were direct and ruthless in attack, trying to thread through Depay and Traoré with low through balls and diagonal passes. Even when the Marseille defence was organised, they looked to double up on the right side with Depay moving over, and would target Traoré with a long ball.

Lyon’s focus down the right side was successful, aided by the fact Marseille left-back Amavi is very poor in defensive one-on-one situations, and Gustavo – the left-centre back – is not a natural defender. Amavi often allowed Traoré to come inside onto his preferred left foot which allowed the Burkinabe winger to cause havoc. The width of Traoré and Aouar stretched the Marseille back four, giving pockets of space for Fekir to move into and for Tanguy Ndombele to surge forward into with the ball.

Despite Lyon’s nicely flowing offense and Marseille’s ineffective gameplan, the score was 1-1 at half time. Houssem Aouar scored a goal after Ndombele had one of his trademark runs into the space created by Lyon’s wingers. Marseille only had four shots in the first half, but one of those – coming after a deep turnover by Lyon – was converted by Thauvin.

HALFTIME: We’re even at the break… Still 45 more minutes to go. #OLOM 1-1 pic.twitter.com/9dc8oZ5Xyr

Marseille have one good spell, then go down a man
Lyon remained the better side in the second half until the 64th minute, when Garcia made some tactical changes. Boubacar Kamara – a central defender – came on for Ocampos. Gustavo stepped up into midfield and Strootman shortly played on the left, before being replaced by Clinton N’Jie. Having Gustavo in midfield and facing a tiring Lyon press allowed Marseille to play through the center of the pitch much more efficiently. It also improved Marseille’s protection in transitions from offense to defense.

It was certainly no coincidence that the period from the 64th minute to the 83rd minute was the only spell of the game where Marseille managed to out-pass Lyon. In these nineteen minutes they kept the ball in the opposition half well, and tested Lyon with crosses into Valère Germain. Other than N’Jie’s’ 82nd minute goal, however, they struggled to create many meaningful chances in it. A red card by Ćaleta-Car, who took down Traoré while being the last man, effectively ended the match. 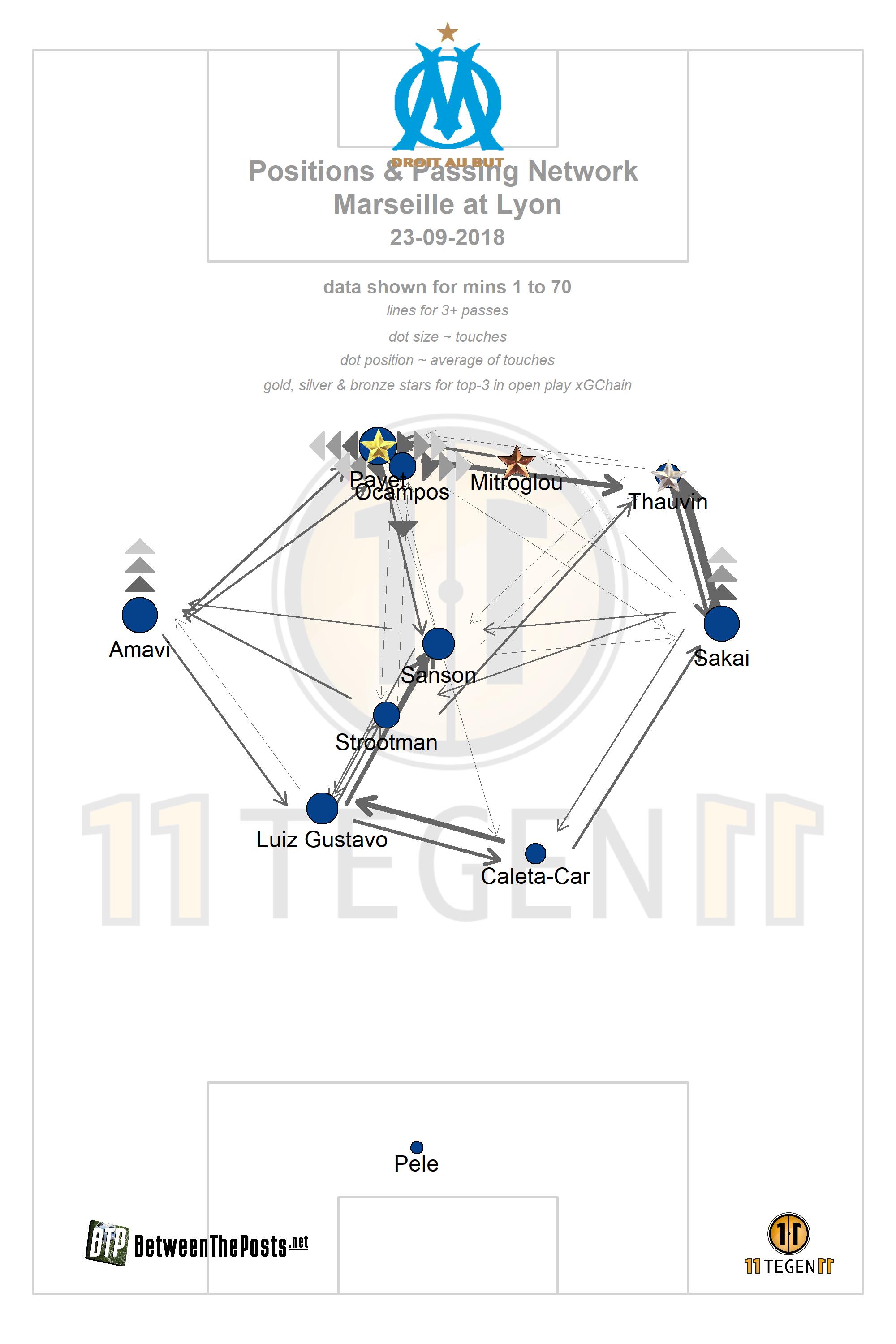 Takeaways
This game highlighted some stylistic differences seen when comparing Ligue 1 to other mediterranean leagues such as LaLiga or Serie A. This was not a game of technically gifted midfielders and not of chess-like positional attacks or of defensive catenaccio. Instead, it was a game with many turnovers in midfield, and lots of pace, power and skill in attack. As such, it was thoroughly entertaining.

Although Lyon were clearly the better side, winning 4-1 flattered them. This win puts them in sixth place in the league, level with Marseille on points but just behind them on goal difference. Lyon showed their versatility both in attack and in defense, and are certainly a team who will be challenging once again for the second place spot in Ligue 1.

Meanwhile this was another night to forget for Rudi Garcia. The only positives he could take away were some individual displays by players. The build-up needs improving while the defense looks disjointed at the moment. This Wednesday, Marseille face Strasbourg. 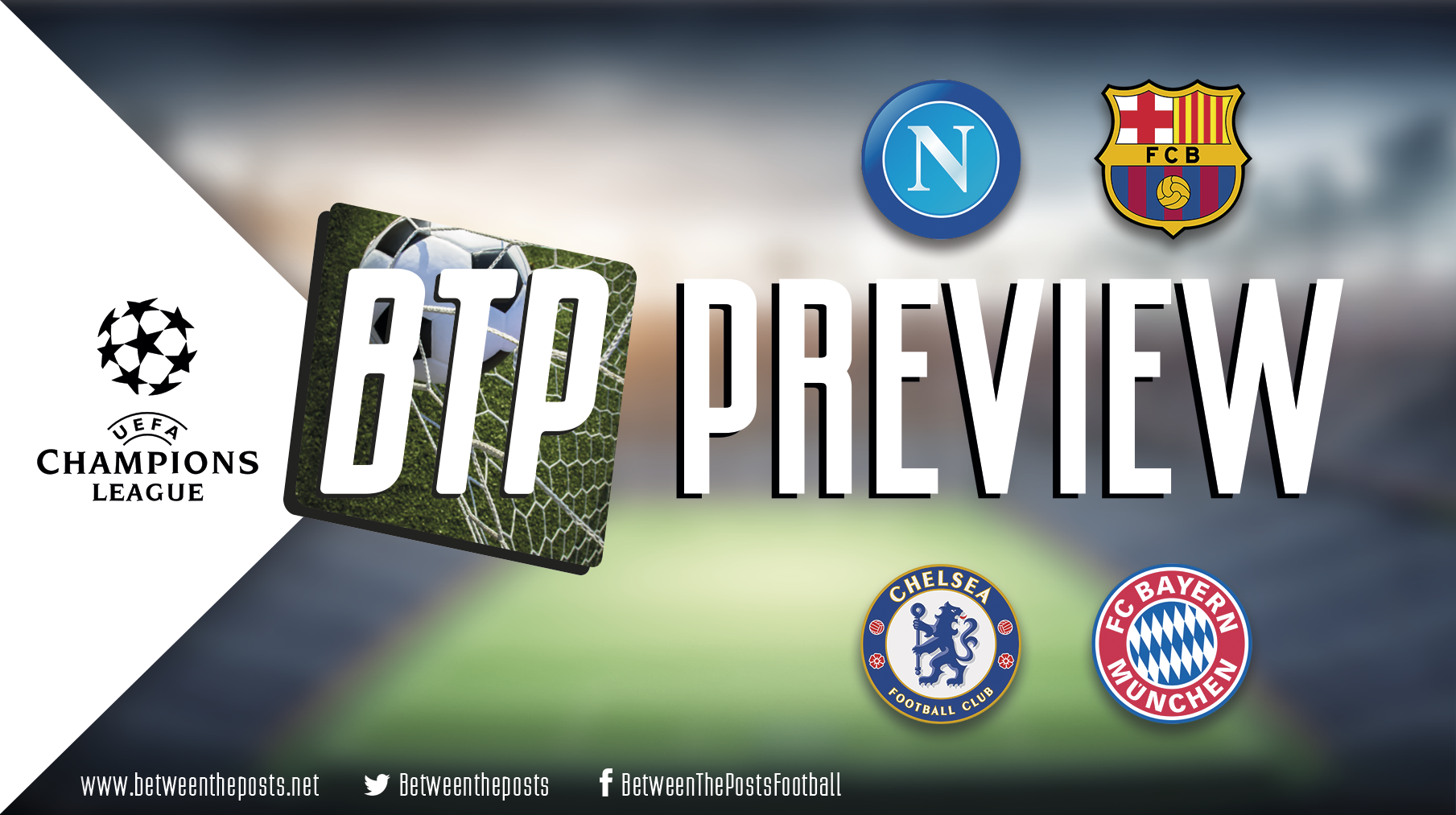