After a lively opening phase and a fast goal for the home side, this game was characterized by both teams having difficulties asserting control. Due to a lack of tempo, dynamics and creativity, both teams could not get this game going for most of the second half, which led to a draw in the end.

Before the game, Monaco found themselves only two points above the 20th place in Ligue 1. With Leonardo Jardim fired in the first half of the season, manager Thierry Henry has the task to get Monaco out of the relegation zone. Since his appointment in October, Monaco have only won two league matches, as Henry has not proven to be the magical solution they craved. The away game against Marseille is a test in every season, but Monaco’s position on the league table did add something extra to the challenge they were facing.

Marseille is not having a great season either. When L’OM look at the league table, they w ill not be too excited by their current ninth position. Moreover, Marseille did not manage to win any of their last six games in different competitions, including a poignant elimination in the Coupe de la Ligue against ASF Andrézrieux. With players like Dimitri Payet and Florian Thauvin, the club and the supporters are expecting quite a bit more from their players and manager Rudi Garcia.

The latter had decided to use the usual 4-2-3-1 formation in this match against Monaco. The Frenchman made two changes with Maxime Lopez and Kevin Strootman – who formed a double pivot 4-2-3-1 is one of the most frequently occurring formations in football. The two most defensive midfielders are called a ‘double pivot’. together – coming in the team in favour of Duje Ćaleta-Car and Valère Germain, which meant that Luiz Gustavo had to fill in the position of central defender.

Thierry Henry opted for the same 5-3-2 formation as in the last games played by the Monegasques. He and his staff made quite a few changes, compared to the match against Rennes. Goalkeeper Diego Benaglio replaced Loïc Badiashile, as first goalie Danijel Subašić is still not on the pitch, due to family reasons. Left back Fodé Ballo-Touré came in for Julien Serrano and Aleksandr Golovin replaced striker Moussa Sylla. And last but not least: new signing Cesc Fabregas made his debut, which meant that Romain Faivre was dropped to the bench.

A tough start for Monaco

Marseille made their intentions clear right from the start, which caused Monaco troubles in the first ten minutes of the game. Marseille made use of Monaco’s insistence on building up from the back, by blocking all the short passing lanes. The home team did this by positioning their front four extremely high up the pitch. This made the space to play in extremely small, and forced Monaco in making mistakes. When Monaco possessed the ball in open play, Marseille would sit in a medium 4-4-2 block, A medium block refers to a team that retreats in their own half out of possession, generally only disrupting their opponents some way into their own half. waiting for the ball to go to one of the flanks, which was the sign to press Monaco. 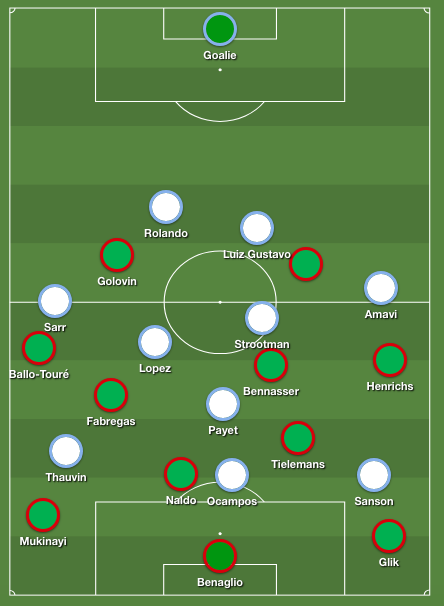 How Marseille attempted to pin down Monaco’s build-up.

Marseille took advantage of the lack of possession from Monaco – due to the high positioning of the Marseille attackers – by playing a quite opportunistic game in the opening phase. Although Marseille were lacking a classic center forward, they were putting the ball in the box with urge, trying to cause chaos in the Monaco defense by winning the ball from knocked off crosses.

One of these knocked off crosses actually initiated the opening goal, albeit from a set piece. Dimitri Payet put in a cross from the left side, which was cleared by one of Monaco’s defenders and picked up by midfielder Maxime Lopez. He found the net with a low shot from distance, thanks to a mediocre reacting by Monaco’s goalie Benaglio, who truly could have done more to keep it out.

After the opening goal, Monaco managed to get some more control over the game. Cesc Fabregas and Youri Tielemans stepped up their game and became more dominant in the possession-based game Henry tries to implement. Thanks to the experienced Spaniard and the hugely talented Belgian, the guests were allowed to move higher up the pitch as a team, which resulted in the possibility to create goal scoring opportunities. The Monegasques were especially looking for through balls to their running wing-backs. However, in general, the passing game Monaco wanted to play was fairly slow and predictable, meaning Marseille had enough time to shift over to the side of the ball and keep their defense compact.

Eventually Monaco did manage to get a goal from one of the passages of play in which they had possession for a long time. Aleksandr Golovin found right wing-back Benjamin Henrichs at the far post, who accidentally assisted Tielemans by having a heavy touch: 1-1 in the 38th minute.

Not the second half that was expected

The second half largely followed to same pattern as the first. Both teams kept their formation and did not switch it up tactically. Especially for Marseille, there was not a lot of improvement in performance. The biggest chance of the second half was for Monaco striker Aleksandr Golovin. After a fast counterattack, left back Ballo-Touré found the Russian with a clever ball, but the attacker did put the ball wide via the outside of the post.

When Marseille had the ball, Monaco still opted for a 5-3-2 organization with a flat midfield. When Marseille’s fullbacks would come into play, it was the outer midfielder or the wing-back who found himself on the side of the ball who would step out and press. As the game progressed, this turned out to be quite an effective strategy in preventing Marseille from being dangerous and causing (high) turnovers.

One consequence however was that at times, Monaco’s wing-backs found themselves outnumbered in two-versus-one situations, for instance if Marseille’s inside forward and fullback would run at them at the same time. The home team often tried this on the left side, by overloading When one team has more players in a certain area or zone than the other team. that side with left inside winger Sanson, a drifting Dimitri Payet and running wing-back Amavi. It has to be said that the success rate of crosses and won balls from knocked off crosses, contradicted with the situation in the first ten minutes of the game: Marseille did not succeed anymore and would not be dangerous from this particular attacking tactics. 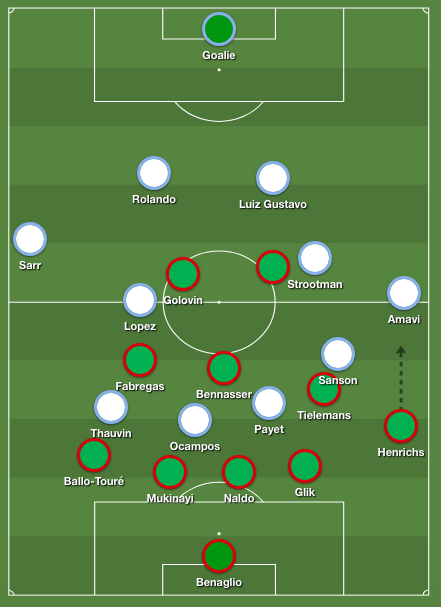 Monaco’s way to deal with the inside forwards and overlapping fullbacks of Marseille. Note that both strikers position themselves at the same level as the double pivot of Marseille. This is a way of positioning that is often seen at the France national team.

Both teams settle for a point

Marseille still would try to pin down Monaco’s defense, but instead of playing it high to one of the wing-backs, Benaglio now often played the ball to one of the central defenders, who then used the attracted pressure by playing the ball into one of the three central midfielders. This resulted in some more control over the game and in combination with a solid defensive tactic, Marseille did not seem to have a chance in turning the game around anymore. On the other side, Monaco was not to eager going forward with too many players as well, perhaps clinging on to the point because of their deplorable situation on the league table.

Until the 70th minute, Marseille failed to make a claim for a goal, but then they managed to find a gap in the zonal marking system Monaco used. This was enough for Florian Thauvin to score a goal and make it 2-1. For some minutes, Marseille thought they scored the equalizer, but the VAR decided that the referee had to look to the replay himself. Upon seeing the footage, referee Mikael Lesage decided that Lucas Ocampos made a foul on Benaglio and so the goal was – highly controversially – cancelled.

In the remainder of the game, both teams failed to make an impact scoring-wise. Despite having more of the ball, Marseille could not convince at all. The home fans made it absolutely clear that they did not like what they saw. Cheering for the ball circulation of Monaco and whistling when their own team had the ball was not a rare event in the second half. Something that illustrates the performance of Marseille in this game and in recent weeks. 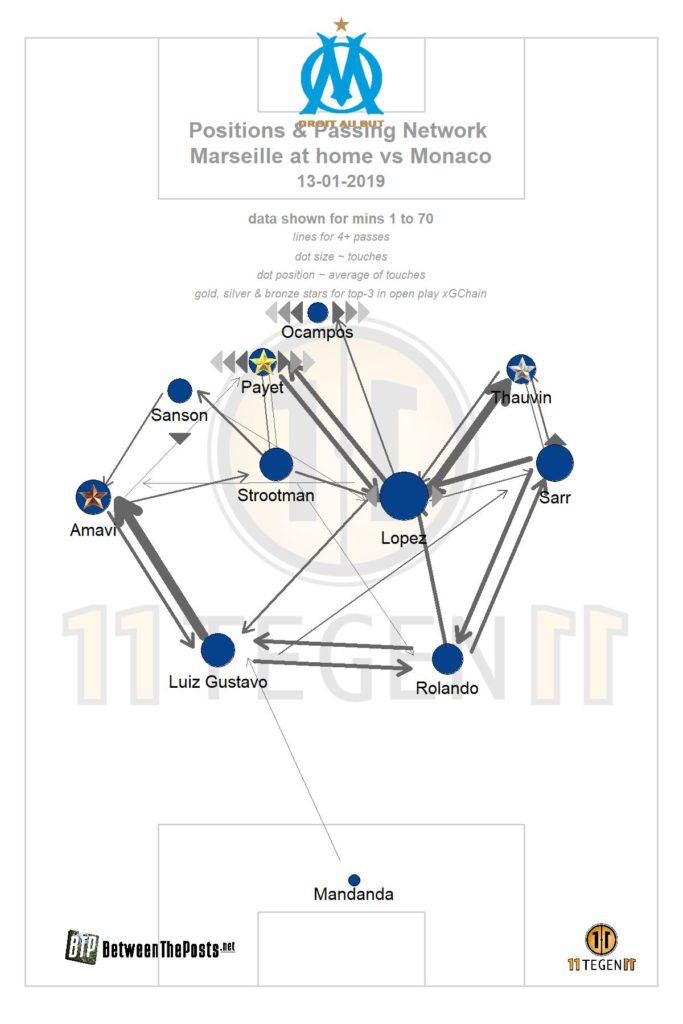 The match between Marseille and Monaco was quite symbolic for the underperforming season both teams go through. With the home crowd whistling at their own team for an unhealthy amount of the game, it was quite a hostile environment for the hosts to step up their game against a renewed Monaco. A seeming lack of confidence that put a mark on both teams, resulted in a flat game for most of the time, with sometimes a few glimpses of potential in both sides. Therefore, the end result of 1-1 was a fair reflection of this display. 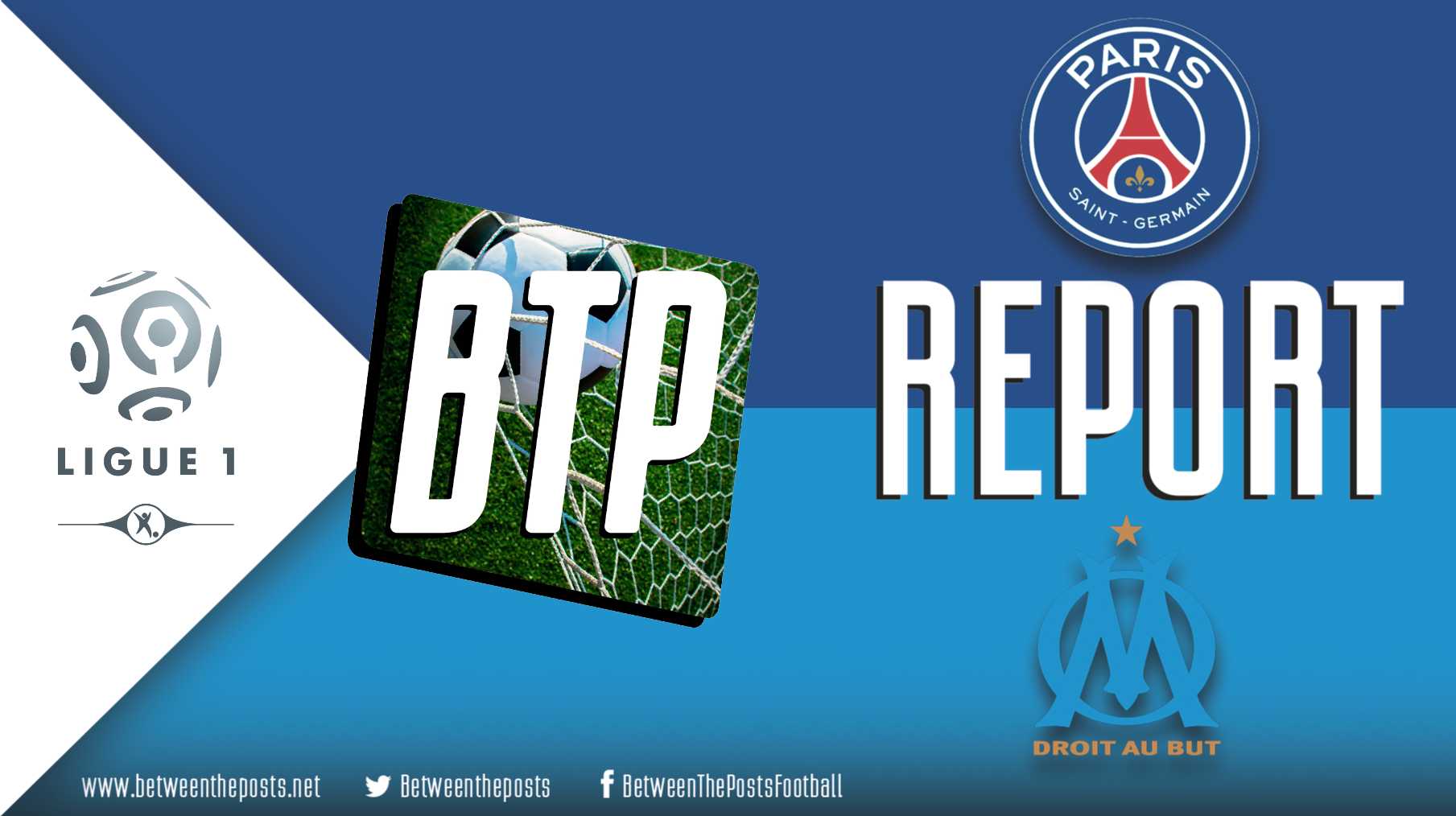