The first half of this match was characterized by stale possession play from both sides, with Marseille looking slightly more incisive thanks to the Dimitri Payet – Jordan Amavi connection. Things changed significantly after the break, when Marseille implemented a renewed high press that choked Bordeaux’s buildup and directly contributed to the winning goal.

The clash between Olympique de Marseille and Girondins de Bordeaux was a classic case of two teams who appeared to be even in quality based on results but were far more unequal according to the underlying numbers. Despite being only five points behind their second-placed opponents coming into this one, Bordeaux were performing more like a mid-table team. Their next expected goals The amount of goals a team is expected to score based on the quality of the shots they take. total was negative – and thirteenth in the league – and they were overperforming their 15.7 expected goals created by a massive figure of 11.3, as they had scored 27 goals off of those chances.

Marseille, by contrast, had a net xG of 2.4 – sixth in Ligue 1 – and had scored 22 goals off of an expected goals total of 21. Marseille, perhaps, were guilty of slight overperformance on the defensive end, but were at least finishing at rates that suggested their offensive performance was sustainable. The same could not be said for Bordeaux, and a return down to earth for their attack could be on the horizon if coach Paulo Sousa does not change things for the better.

For now, the Portuguese manager stuck with his favored 3-4-2-1 formation, with Josh Maja leading the line ahead of attacking midfielders Yacine Adli and Nicolas de Préville. Otávio and Aurélien Tchouaméni formed the double pivot 4-2-3-1 is one of the most frequently occurring formations in football. The two most defensive midfielders are called a ‘double pivot’. sandwiched between wing-backs Loris Benito and Youssouf Sabaly. Pablo, Laurent Koscielny, and Vukašin Jovanović played in defense, protecting goalkeeper Benoît Costil.

André Villas-Boas also went with the usual, deploying a 4-3-3 structure that saw Valère Germain play up top ahead of the injured Darío Benedetto. The clever Dmitri Payet and Bouna Sarr took up their place on the wings, flanking central midfielders Morgan Sanson and Valentin Rongier and lone pivot Boubacar Kamara. The back four consisted of fullbacks Jordan Amavi and Hiroki Sakai and center-backs Duje Ćaleta-Car and Álvarez González. Steve Mandanda started in goal.

Marseille struggle in their buildup

Marseille were the team with the larger share of possession in the first half, but they struggled to make the most of it. A lot of that had to do with their disconnected possession structure, which made it very difficult for Marseille to pass into midfield. 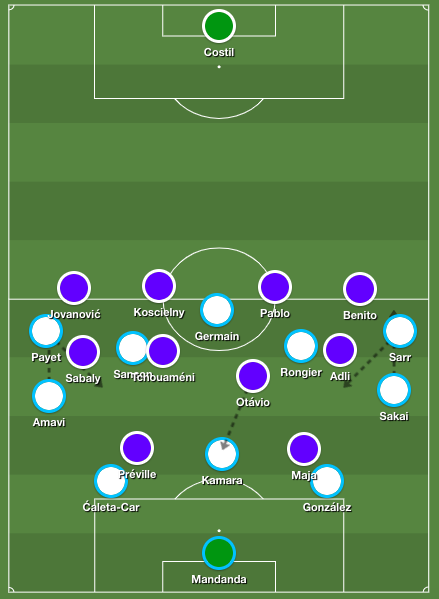 Sanson and Rongier positioned themselves very high up the pitch, which prompted Bordeaux to bring their midfield line back and create an extremely compact set of defensive lines. This caused the center of the pitch to be very congested and made it close to impossible for Marseille’s situational back three – with Kamara dropping – to find options between the lines.

Bordeaux also defended against Marseille’s numerical superiority at the back fairly well. Shifting into a 4-4-2 on defense – Jovanović took up the right back position, Sabaly moved to the right wing, and Adli dropped to the left flank – Préville and Maja worked hard to pressure Ćaleta-Car and González. Sometimes one man from midfield would step up onto Kamara while the wide player pinched inwards to guard the center, or either Préville or Maja would sit on Kamara while cutting off access to the far side center-back.

Marseille’s offensive positioning and Bordeaux’s defensive structure left the flanks as the home side’s only avenue of attack. Dmitri Payet, in particular, got plenty of touches on the ball, as he dropped into the deep left halfspace If you divide the field in five vertical lanes, the halfspaces are the lanes that are not on the wing and not in the center. Because there is no touchline like on the wing, players have the freedom to go everywhere. But this zone often is not as well-defended as the very center. This makes it a very valuable offensive zone to play in and a lot of chances are created by passes or dribbles from the halfspace. to receive while Amavi made dynamic runs ahead of him. In the middle of the half, Marseille had some success progressing the ball through those two, as Payet linked up with Sanson to fire balls into the channel into Amavi, who tried to play cut-backs.

But, in general, the strategy was difficult to pull off consistently, as the high level of execution required from everyone involved made the approach unreliable. As a result, Marseille settled for seven shots from range in the first forty-five minutes of action. Bordeaux, for their part, were even more stunted offensively, but they continued their trend of overperforming their expected goals when Adli fired home a screamer from distance in the 31st minute.

Marseille’s press dominates the opening stages of the second half

Marseille got off to a perfect start three minutes into the second half after Amavi punched a powerful header into the net off of a Payet corner kick. The goal lifted Villas-Boas’ men and they channeled their renewed vigor into an intense and effective high press that completely shut down Bordeaux’s buildup and allowed Marseille to dominate close to 70% possession for the first fifteen minutes following the break. 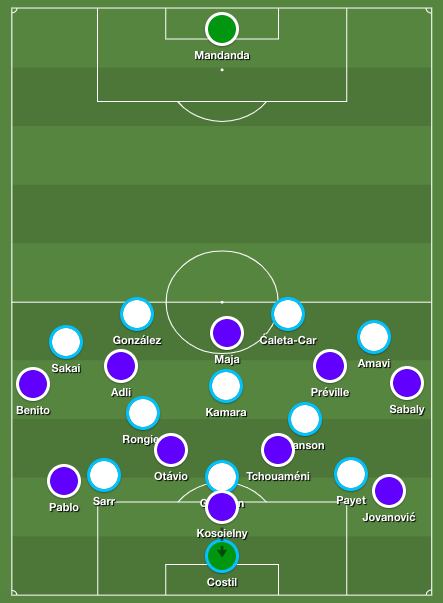 Sarr, Germain, and Payet went man-to-man against the opposition’s back three, with Germain even pressing the goalkeeper as he cover shadowed When a player is positioning himself between the opponent that has possession of the ball and another opponent, he is blocking the passing lane. When applied the right way, his ‘shadow’ is effectively taking the opponent in his back out of the game, because the pass can not be played. Koscielny on goal kicks. Rongier and Sanson secured pressing access to Otávio and Tchouaméni while also ensuring that they could close down the passing lanes to attacking midfielders Adli and Préville. Fullbacks Sakai and Amavi also helped in the latter regard, as they sat narrower than one would expect so they could quickly pressure Bordeaux’s two number tens if necessary.

Coach Paulo Sousa did not help his team’s case by designing a buildup structure that mimicked the flaws of his rival. Adli and Préville were positioned extremely high and were quite static, making it easy for Marseille to shut down the halfspaces. Benito and Sabaly were similarly advanced, meaning that center-backs Pablo and Jovanović had to play wider and increase the distances between themselves and their partners in the center. That put a lot of pressure on Koscielny and Costil to deliver inch-perfect passes and required the wide center-backs to have the individual ability to see off their pressers and play a vertical pass upfield.

Bordeaux did not look capable of doing those things this game and Otávio sought to solve this issue in the 60th minute by dropping to create a back four in the box. That shortened the connections between the defense but left only one central midfielder left to link the first phase to the second, and it resulted in a Marseille goal. Otávio, under pressure from Rongier, played a terrible ball to the edge of the box, which Sanson intercepted and promptly turned into an effort on goal that put Marseille up 2-1.

Bordeaux dominate possession but create nothing

The change in the scoreline saw Marseille ease off their intensity and press more selectively, allowing their opponents more of the ball. However, even though Bordeaux held an extreme share of possession for the rest of the game – 72.9% – they created only one shot on goal in the second half – a speculative long shot. Their inability to fashion chances related to their struggles in possession described earlier and Marseille were, thus, able to get a breather on defense before putting together periodic counterattacks.

In the 72nd minute, Marseille sprung their press, again, and Sanson put a good chance wide of the post after he went one-versus-one with the keeper from a wide angle. Marseille were not to be denied a third, though, and in the dying embers of the game, Rongier won the ball and sprung a deadly counterattack that ended with substitute Nemanja Randonjić scoring.

André Villas-Boas was not perfect tactically, especially with his buildup, but his pressing adjustments in the second half were inspired and brought his side a deserved win. For now, Marseille sit in second place, five points behind league leaders PSG.

Bordeaux were extremely poor from start to finish. Though their defending was respectable in periods, their offense was catastrophic and was reflective of their wider attacking struggles that have been covered up by very efficient finishing. Paulo Sousa needs to find a different offensive formula if he wants his team’s relative success to continue.

Plots will be added to the match as soon as possible. 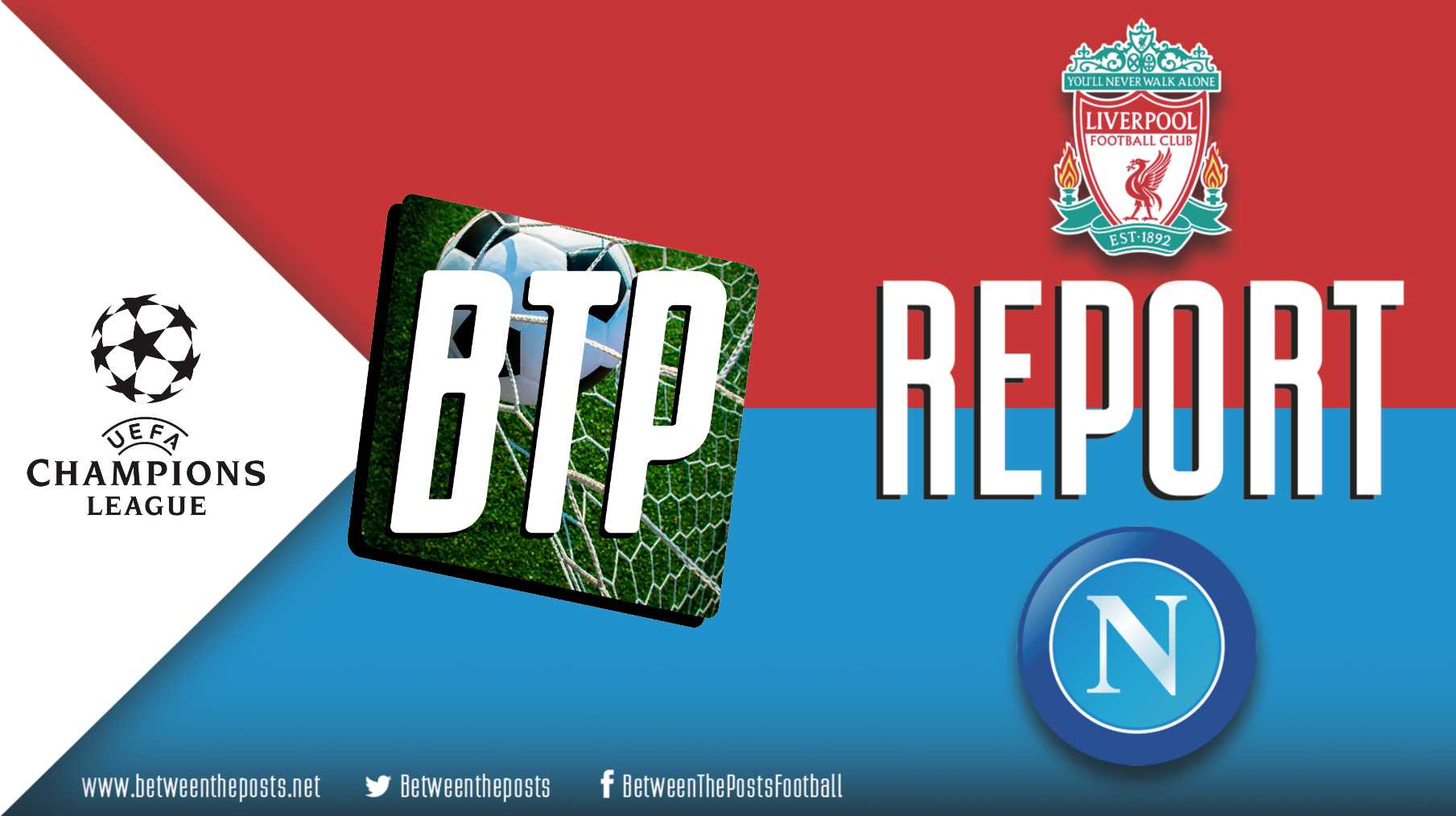