After Palmeiras were able to neutralize Paranaense’s early possession – by limiting the options forward for playmaker Guimarães – a flurry of chances either way opened up the game. One open goal miss and twenty-nine Paranaense fouls later, the winner was found; courtesy of substitute Raphael Vega’s 80th minute penalty.

Palmeiras came into this match off the back of a seemingly comfortable win against Chapecoense; Luiz Felipe Scolari’s sturdy 4-2-3-1 shape has bared serious fruition this season, as the table-toppers went into their match against Athletico Paranaense with five wins in the last five games. Wingers Dudu and Zé Rafael had nine goal contributions in the Série A this season. Combined with the solid defensive organization, the two attackers have been foundational in Palmeiras’ early Brasileiro dominance.

Their opponents Paranaense came into the game following a convincing 3-0 win against Fluminense in their last Série A outing. For this one, manager Tiago Nunes made multiple alterations, including a change in formation. Usually operating in a 4-2-3-1 shape, Nunes went for a 4-1-4-1 formation here, with Wellington operating as the sole defensive midfielder. This was most likely done in an effort to combat Palmeiras’ number ten Lucas Lima.

For the most part, the opening moments were characterized by Paranaense’s defenders and midfielders in possession, passing the ball around, unable to get it into the final third. The one-third of the pitch that is closest to the opposition’s goal. As mentioned in the preview to this game, Bruno Guimarães was operating from deep. While this was rather rather effective in terms of retaining possession, a well-drilled Palmeiras side constantly prevented their opponents to break into dangerous territory. 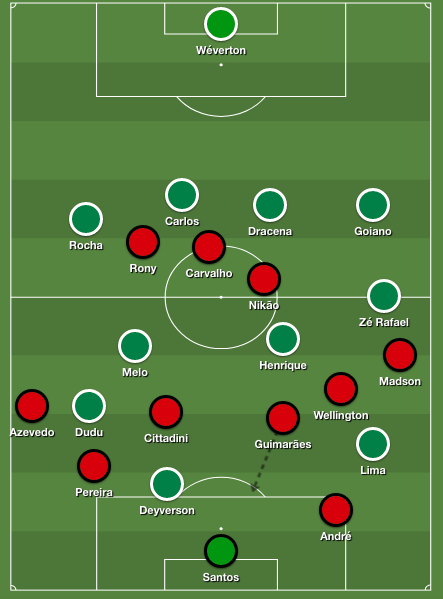 Despite Paranaense owning the lion’s share of possession, it was the league leaders that had the first chance of the game. Lucas Lima shifted a neat ball into the feet of Dudu, the right winger managing a sharp turn that perplexed defender Léo Pereira; lucky for Paranaense, his powerful drive skewed just wide of the post. Minutes later, the visitors responded following a challenge from Felipe Melo that not only lost him two ‘Brasileiro fantasy player’ points, but also gave Paranaense a free kick in a dangerous position. Striking the ball in the fashion of Roberto Carlos’ 1997 free kick in the Tournoi de France, Nikão forced a good save from Wéverton in the Palmeiras goal.

Deyverson’s headed chance flew over the bar and Nikão’s second effort of the game, a low-driven shot, went narrowly wide of the post. At the interval, neither side was able to find a breakthrough. The little joy Paranaense had in the first forty-five minutes came via Nunes’ manipulation of the front three. With constant movement across the forward line, Rony and Nikão could often end up on the same side, overloading the fullbacks. This pragmatism was promising, but neither side carved out a serious chance barring the aforementioned ones, meaning the two teams went into the dressing room with an unchanged scoreline.

After hundreds of inflatable tubes, thrown by the Mancha Alvi-Verde The Mancha Alvi-Verde are the largest group of Palmeiras ultras. They are known for not only their passionate support, but also for their acts of violence, including when they pelted their own team bus back in April before a Copa Libertadores tie.   cluttered the pitch, Palmeiras were able to begin the second half. The home side started it with some sort of rhythm, utilizing the right hand side and fullback Rocha to exploit weaknesses in the Paranaense back line, particularly left back Azevedo. This change in buildup structure instantly brought not only an improved performance, but some serious chances along with it. 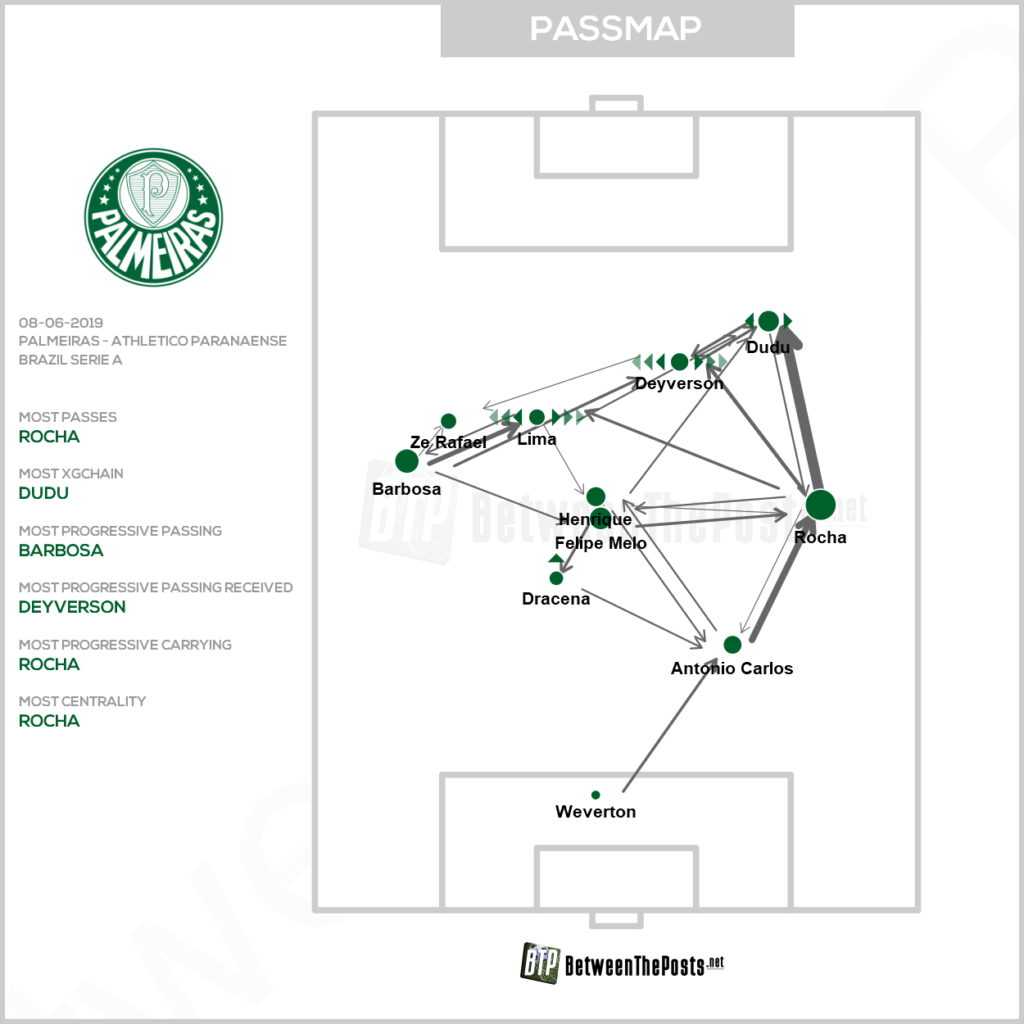 Palmeiras’ attacks would be directed by Rocha, the right back. This was a deliberate plan to target Azevedo, who has looked poor in recent games. It worked.

In the 54th minute, a long switch of play, brought down expertly by Dudu, found the winger in unprecedented space on the edge of the Paranaense area. Instead of unleashing a shot, Dudu chipped the ball towards the back post, where the onrushing Zé Rafael should be. He was there, but, from four yards, his side-footed volley evaded the post. The scrambling goalkeeper Santos was lucky to not be picking the ball out of his net. A sign of things to come, however, as Palmeiras had clearly shifted gears going into the second half.

A long ball by central defender Antonio Carlos drifted over the Paranaense defense and found Deyverson, but the former Levante striker’s half volley only stung the palms of Santos. Felipe Melo had a curling effort from distance narrowly escape the goal, and with fifteen minutes to go, Palmeiras looked like the ones more likely to take three points.

They had a chance to do exactly that in the 78th minute, when the clumsy Azevedo tried to clear a bouncing ball but instead brought down Dudu in the area. Lucas Lima’s replacement, Raphael Vega, was given the ball and his powerful finish was too much for Santos. A 1-0 lead against a Paranaense side that lacked significant attacking output meant that the final ten minutes were a cakewalk for top of the league Palmeiras. Looking at the amount of expected goals The amount of goals a team is expected to score based on the quality of the shots they take. Palmeiras created, there was only one rightful winner in this game. 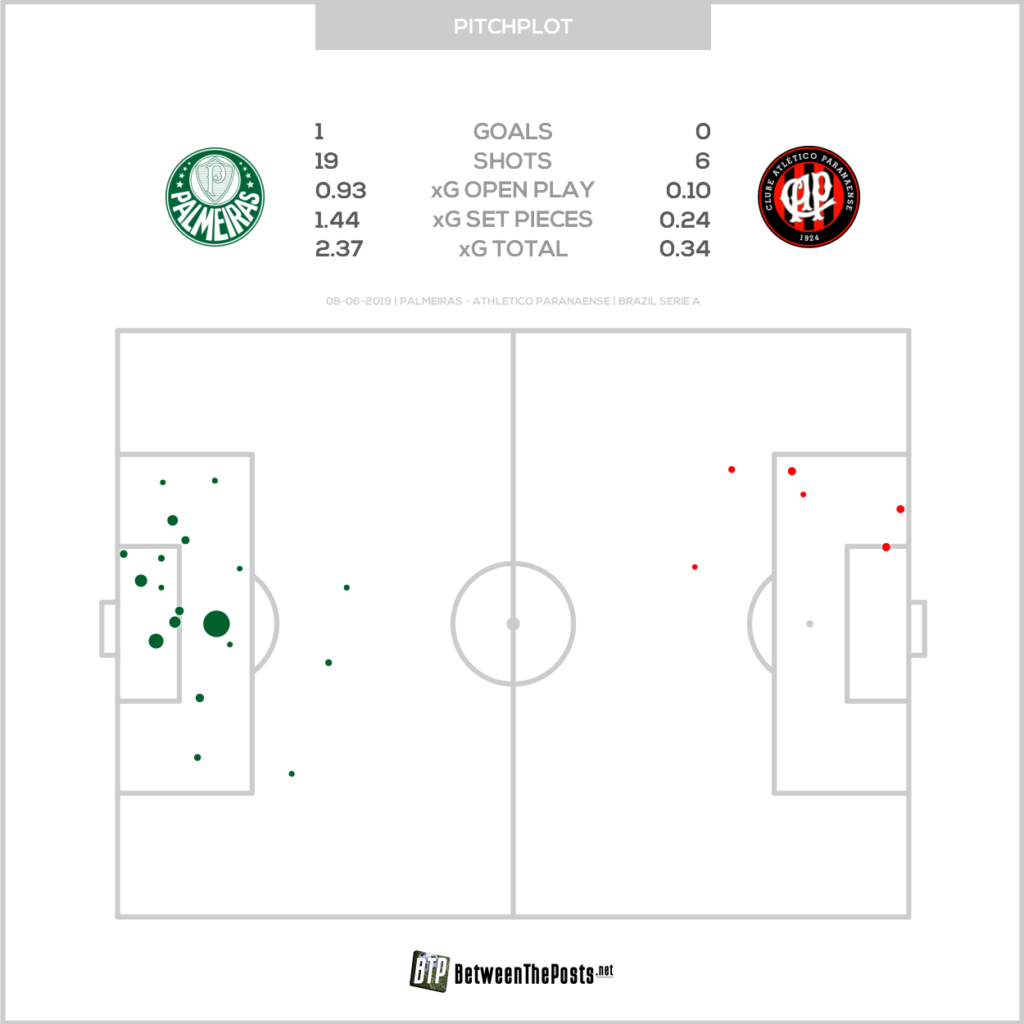 2.37 xG, 1 goal. A wasteful Palmeiras escaped a setback thanks to a penalty from Vega.

For the first half, Palmeiras did not look like they were a side top of the league but they seem to have found a perfect formula to win most matches in this Brazilian league. The lack of clinicality in front of goal could have cost them and may be an issue going forward, however, six wins from six means that Palmeiras manage to extend a four point lead at the top of Série A, ahead of second place Atlético Mineiro. Their next game sees them at home to bottom of the table Avaí, a sure win.

As for Paranaense: manager Tiago Nunes has shown that he is able to build a side out of defense, using Guimarães as the base, and his pragmatic approach going forward can often create opportunities for his forwards. However, the lack of quality that his current front three have was prominent against Palmeiras and could be an issue in their attempt to qualify for continental competition. Their next opponent, mid-table Goiás, is a three-thousand kilometer round-trip for Paranaense and will certainly test their mettle. 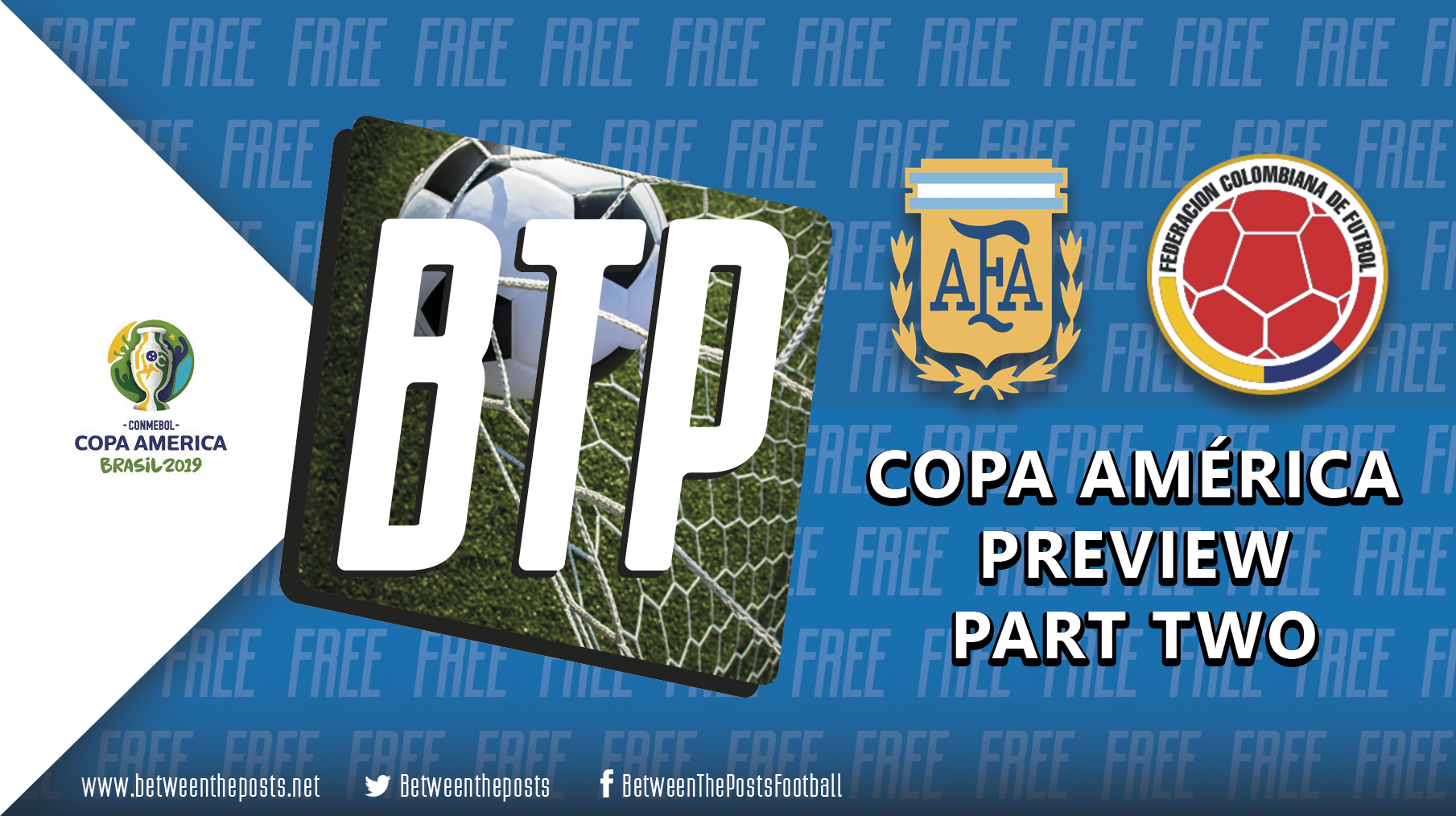