Title-chasing Palmerias entered their clash with Atlético Mineiro looking to close the gap with leaders Flamengo. Atlético, on the other hand, were sitting in the middle of the table and aimed to spoil their hosts’ plan. In the end, Palmeiras will be relieved to have claimed a 1-1 draw after facing a stern Atlético challenge.

Mano Menezes set up Palmeiras in a 4-2-3-1 formation for his seventh game in charge after taking over from Luis Felipe Scolari. Menezes hit the ground running, having registered five wins and only dropping his first points in last week’s difficult away fixture at Internacional, a game that came a mere 48 hours after the home win over CS Alagoano.

Forn this game, Weverton was in goal and ahead of him was the four-man backline of Marcos Rocha, Gustavo Gómez, Vitor Hugo and Diogo Barbosa. They had a double pivot 4-2-3-1 is one of the most frequently occurring formations in football. The two most defensive midfielders are called a ‘double pivot’. of Felipe Melo and Bruno Henrique. Lucas Lima was in attacking midfield while the wingers were Willian and Dudu. Striker Miguel Borja was the one to lead the line.

Rodrigo Santana sent out the away side in a 5-4-1 shape. Atlético had Cleiton as their keeper with the five-man defensive line in front of him. The three central defenders were Iago Maidana, Leonardo Silva and Igor Rabello. Guga and Fábio Santos were then the wingbacks. Nathan and Elias were in central midfield and were flanked by the pair of Luan and Rómulo Otero. The man who was tasked with the lone striker job was Franco Di Santo.

The home side did well to establish an early monopoly on possession and this was helped by Atlético’s gameplan. From the onset, they looked to sit deep and opted not to press Palmeiras, but rather opted to keep the shape compact and deny passing lanes in between the lines of four and five. Whenever they had possession, such as a goal kick or free kick, they looked to go long instead of holding onto the ball.

If they did manage to win an aerial duel or a second ball, they seemed to employ a shoot-on-sight policy. Atlético struck from all kinds of distances early on without hesitation, seemingly looking to threaten the hosts without opening themselves up by supporting an attack with numbers. This also contributed to their quick concessions of the ball and Palmeiras having control of proceedings.

When building up the play, Palmeiras would have their fullbacks push up high and stay wide. Melo and Henrique would help the central defenders build up the play and were essentially unmarked throughout. Di Santo would provide some pressure but he could not disrupt them significantly. With that time and space, the pair had to try to progress the ball to the attacking players. Lucas Lima would drop frequently, looking to get involved and potentially draw out any of the midfield of Atlético.

The visitors often just allowed him to drop unimpeded and stuck to their shape. Their wingers would tuck in at times to create central options, especially when Lima dropped, which would also allow the fullbacks to move higher. Palmeiras struggled to break them down with their best opportunities coming from set pieces with some quality crosses sent into the box. 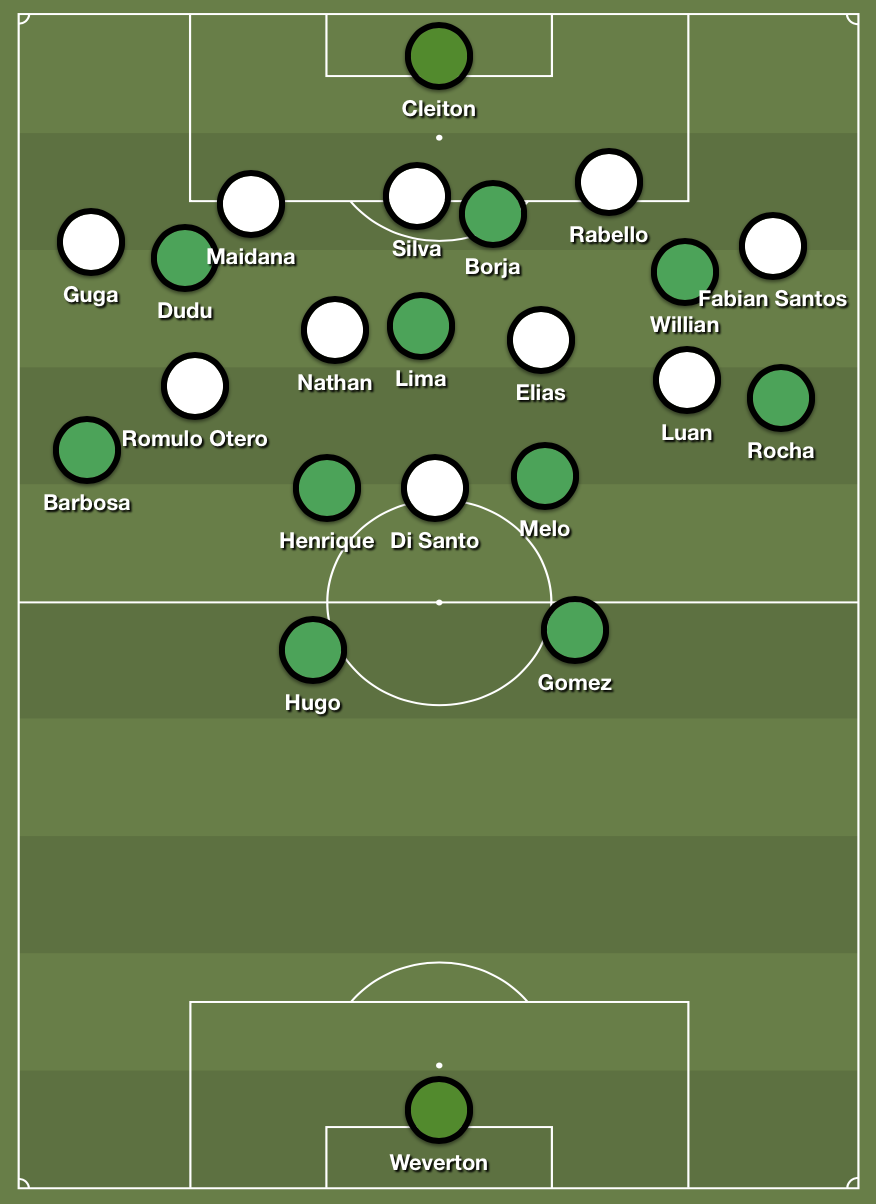 The normal setup throughout the game with Palmeiras in possession and Atlético sitting deep.

One tactic that Palmeiras used to bypass the Atlético block was to play balls over the top of the defense. These would be played into the wide areas, as Atlético’s deep shape did not give them much room to play the ball. They would also have to be wary of Cleiton who would look to come and sweep up any balls over the top. These balls in behind Atlético did successfully find men out wide and led to some crosses into the box but nothing came of those. This threat primarily came from the right-hand side where Rocha and Willian found some room to deliver the ball.

Atlético grow into the game

The away side began to hold onto the ball more as the clock ticked towards half-time. Whenever they would win their long ball battles they looked to circulate the ball and build structured attacks. They would build with a back three and their wingbacks in advanced positions. Nathan and Elias would assist in the buildup with Nathan the one who would also look to progress the ball forward.

Palmeiras would ask their wingers to drop back to the sides of their double pivot to make a 4-4-1-1 shape when they dropped back. Like their opponents, they did not press aggressively high up the pitch. Their primary threat came from crosses into the box, both from set pieces and open play. In open play, they would manoeuvre the ball wide and Di Santo would be supported in the box by the far side winger and/or wingback. There was one instance in the 37th minute when Guga found the head of his left-sided counterpart Santos, who headed the ball over for their best chance up to that point. 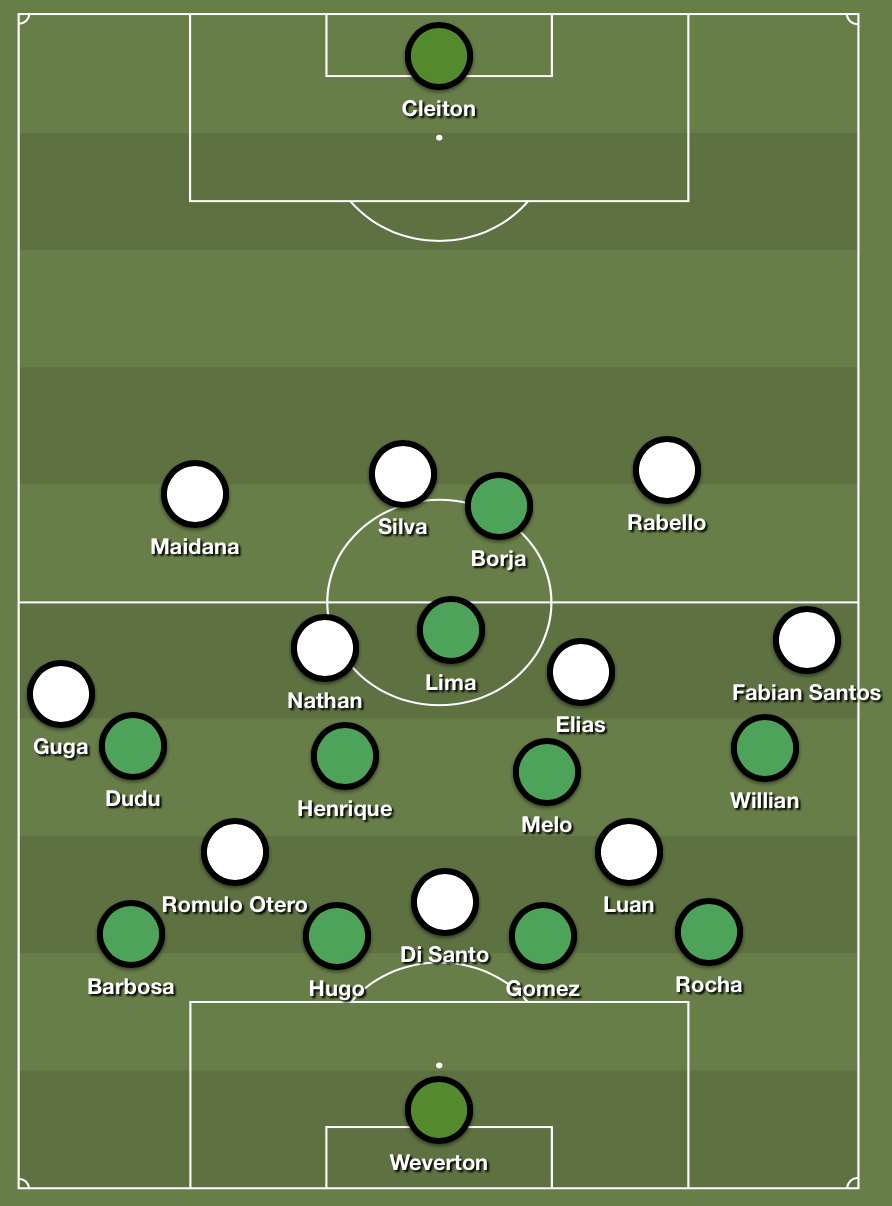 The game’s setup while Atlético were in possession.

This increased level of offensive activity from Atlético culminated in them taking the lead just before half-time. After winning the ball off Dudu, Atlético went on a counterattack that went at a pedestrian pace. Yet Palmeiras seemed content to let the visitors explore their options, the double pivot simply allowing Guga to find Nathan between the lines. At this point, it seemed they realized the potential danger but the Atlético midfielder was already running at their defense. He then showed great skill and composure to work the ball to his right foot and strike across Weverton from just outside the box. This signaled the end of the half.

The hosts did not come out of the break with any tactical changes. They looked to break through the Atlético wall in much the same way as before. Even with the introduction of Deyverson for Lima fourteen minutes into the second period, they continued the same way structurally. They toiled for over half an hour to find an equalizer, while Atlético threatened on the counter, especially due to the lax Palmeiras defending in these situations.

Melo and Henrique seemed to shirk all defensive responsibilities, exposing their backline to Atlético’s attackers. The most extreme case being when Santos had provided overlapping support into the box during a counterattack. He had four teammates to aim a cross towards versus four Palmeiras defenders, one of which was completely free at the back post but his delivery sailed over the bar.

The hosts did turn up the pressure as time wore on but still struggled to create meaningful opportunities. Most of their work came from out wide with crosses into a crowded Atlético box. The away side were able to deal with for the most part, but the pressure eventually took its toll. The equalizer came from some brilliant wide play from Dudu. He collected it on the left and he faced up two defenders. After some feints, he lifted the ball to substitute Gustavo Scarpa who immediately played it back to the onrushing Dudu. He then stroked it home first-time past Cleiton to draw his side level. Palmeiras then had a few set piece chances to grab the winner in the remaining minutes, but failed to do so.

Palmeiras put in a performance that belies their league position. They might consider themselves lucky to escape with a point after their poor overall efforts which they were almost punished for. Atlético will be disappointed to have let the victory go in the dying minutes but satisfied in their execution of a solid plan. They were compact and difficult to break through while still threatening going forward. They now have the unenviable task of going away to league-leaders Flamengo. Palmeiras will go away to fellow title-chasers Santos in a mouth-watering clash at the top. 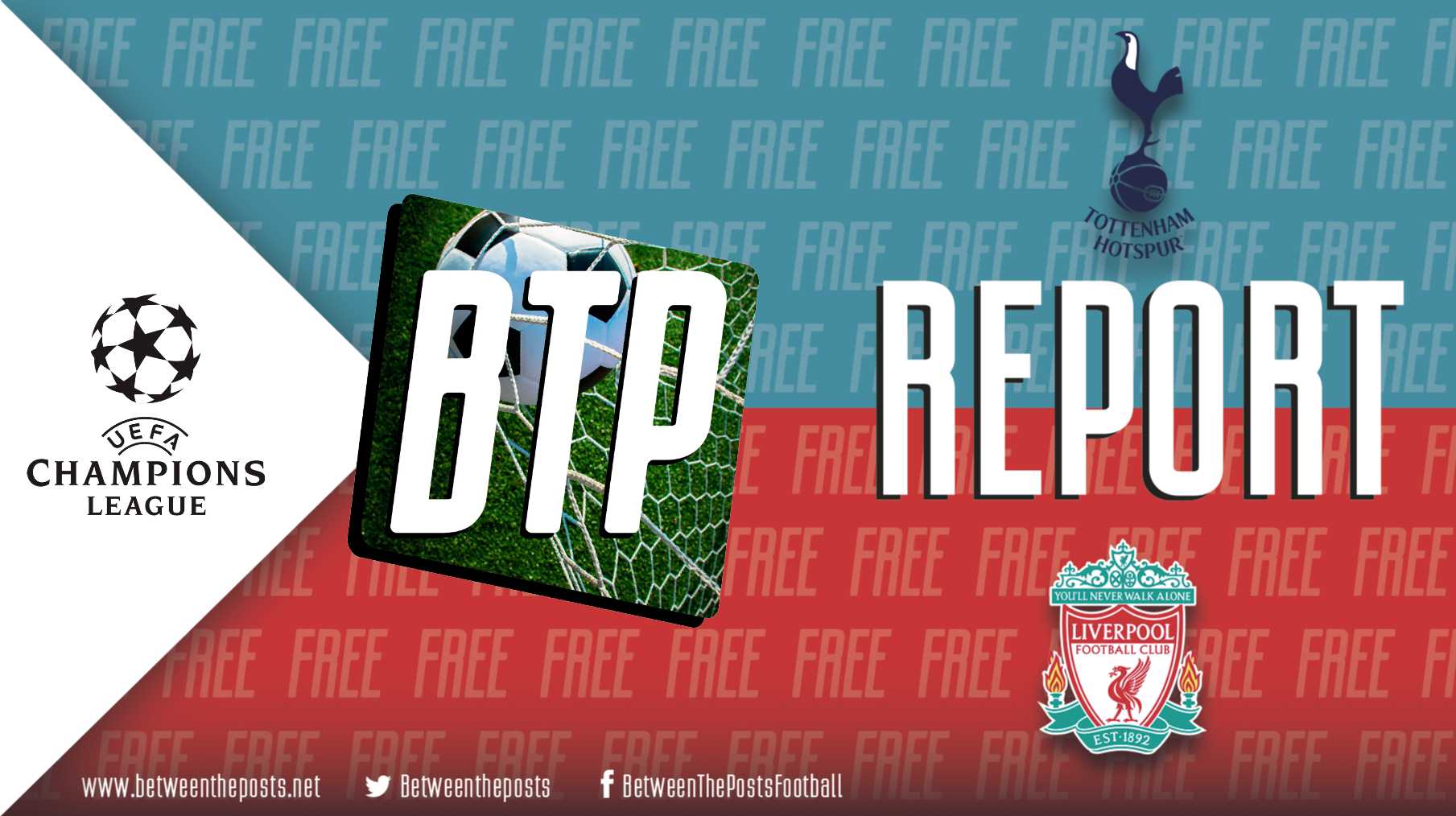 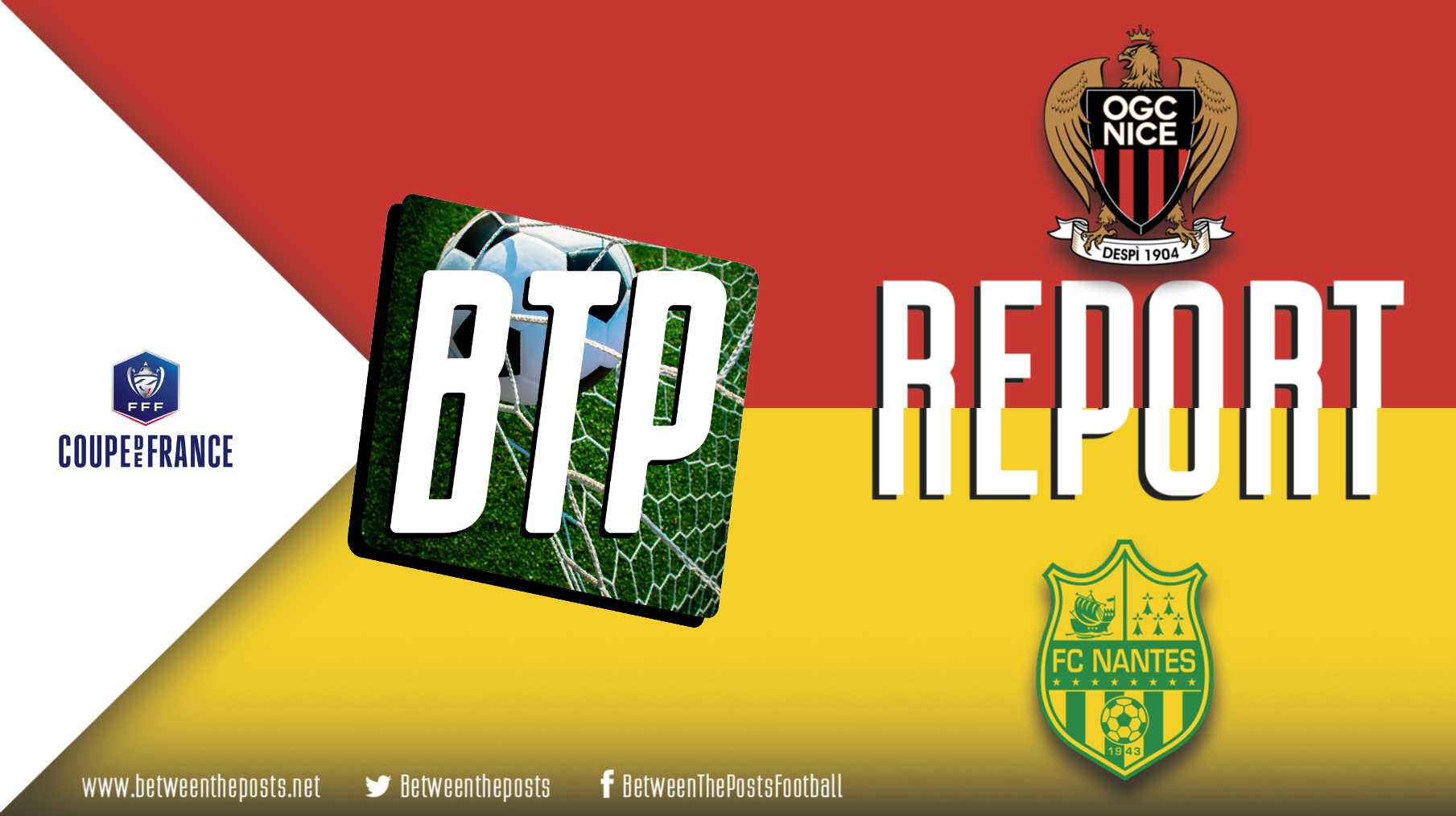