Palmeiras dominated the first few minutes and took the lead. After that, they struggled defensively, but Fluminense’s uninspired attack was not able to create many chances. Palmeiras scored two consecutive goals in the beginning of the second half that sealed the game early.

Both teams have been through some eventful weeks with new managers coming in on both sides. Palmeiras struggled lately, lost the first spot in the league table and were eliminated by Grêmio in the Copa Libertadores quarter-final. They also lost 0-3 against league leaders Flamengo, leading to the sacking of Luiz Felipe Scolari.

Former Brazilian national team manager Mano Menezes, who left Cruzeiro just a month ago after flirting with the relegation spots, took over last week. His first game in charge was a 2-1 win away at Goiás. He made two changes to the starting lineup with Ramires and Zé Rafael both not featuring in the squad. Felipe Melo and Willian took up the free spots in the 4-2-3-1 shape.

Fluminense not only struggled the past few weeks, but the whole season. They sit in seventeenth position which is a relegation spot. To turn things around, Oswaldo de Oliveira started in the end of August. His record by now is one win, one draw and one loss. He persisted with his 4-1-4-1 formation and trusted the same eleven players that secured their first win since six games.

Against the ball, Palmeiras set up in a low block A low block refers to a team that retreats deep in their own half out of possession, generally only disrupting their opponents around their own box. with a 4-5-1 shape. However, left midfielder Yony González dropped unnecessarily deep on the left side to mark Palmeiras’ right winger Dudu. Palmeiras right back Marcos Rocha positioned himself in the right halfspace If you divide the field in five vertical lanes, the halfspaces are the lanes that are not on the wing and not in the center. Because there is no touchline like on the wing, players have the freedom to go everywhere. But this zone often is not as well-defended as the very center. This makes it a very valuable offensive zone to play in and a lot of chances are created by passes or dribbles from the halfspace. and was able to exploit the space left by González.

The staggering on the right side was completed by Gustavo Scarpa who was also positioned in the right halfspace. He constantly threatened Fluminense’s last line and was also able to create spaces for Luiz Adriano by pulling away Airton out of the center. 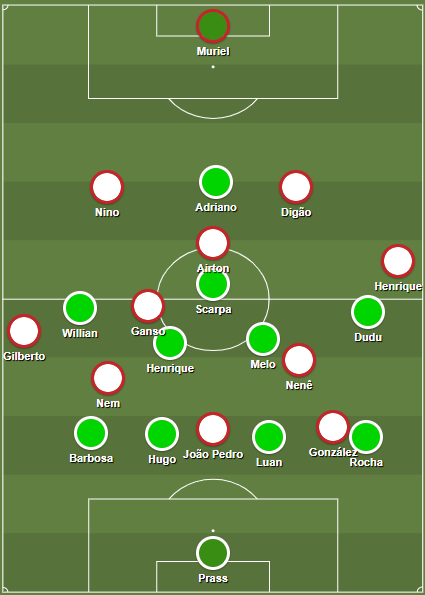 Because of the positioning of Rocha, Palmeiras was able to exploit the spaces.

Fluminense’s problem was not only the poor positioning of González. If Rocha received the ball, the left midfielder had to push up and pressure his opponent. Following that, Caio Henrique moved out to pressure Dudu. This left a gap between Digão and Henrique that Airton tried to fill by dropping and marking Scarpa. The problem was, he struggled with that task because Scarpa positioned himself behind Airton, who lost his opponent.

Because the defensive contribution of Nenê was inconsistent, the passing lane to Luiz Adriano was open. The striker supported his teammates on the right side and was able to play through balls to Scarpa. After creating good scoring chances in the first few minutes through the right side, the goal ultimately came from the left.

Diogo Barbosa and Willian advanced the ball on the left wing and passed Fluminense’s midfield line with ease. Scarpa supported his teammates by moving to the left wing, pulling Nino with him. Fluminense’s back four again showed that they struggle when they have to shift. It was again Digão who stayed too far on the other side. The huge gap between the center-backs was exposed by Barbosa. His shot hit the post, but the ball fell to Adriano who scored his first goal of the game. 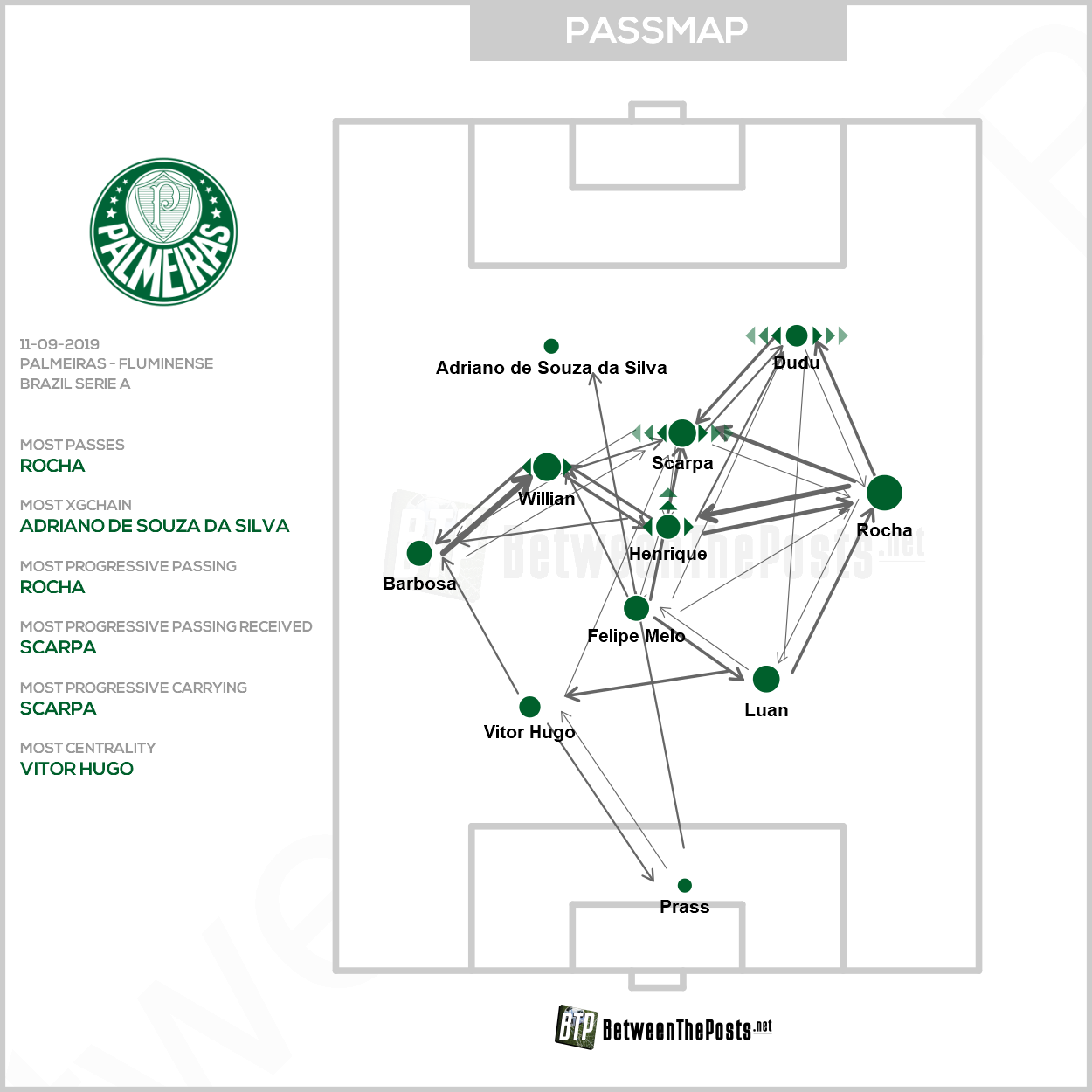 Palmeiras leaves the ball to the guests

After the goal, Palmeiras focused on pressing Fluminense out of a 4-4-2 medium block. A medium block refers to a team that retreats in their own half out of possession, generally only disrupting their opponents some way into their own half. Scarpa marked Airton while Adriano positioned himself between the center-backs, cutting off the passing lane and forcing them to play wide. Melo and Bruno Henrique followed the movements of Ganso and Nenê.

The plan was good and should actually have led to turnovers, but Palmeiras showed a weakness in their vertical compactness. The back-four was too deep and left huge gaps to the midfield, thus making it easy for Fluminense to advance the ball. 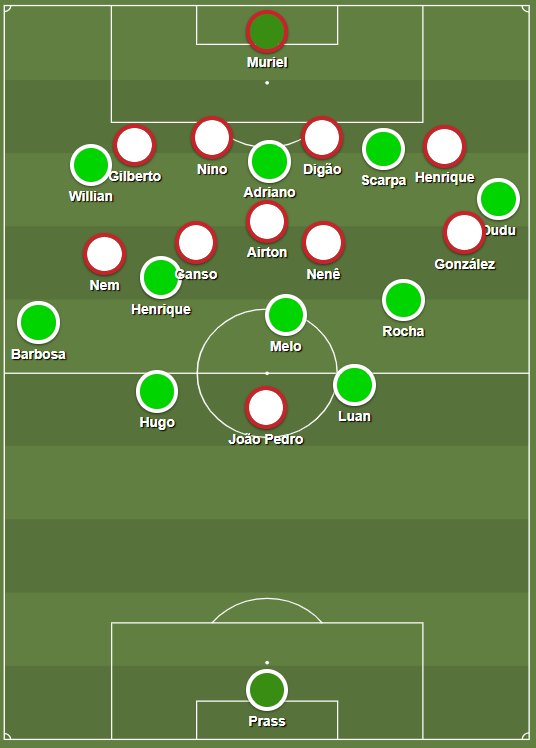 Palmeiras tried to split the game, but the pressing was exploited because of poor vertical compactness.

In possession, the fullbacks, especially Henrique, liked to advance high up the field. While González moved up into the last line together with João Pedro, right winger Wellington Nem looked for spaces between the lines. Nenê switched between a deeper position to support the buildup and a higher position between the lines. Ganso was responsible for the buildup.

Although Fluminense advanced the ball with ease up to the box, they struggled to create chances. In the whole game, they just had two breakthroughs that led to a goalscoring opportunity, both created by left back Henrique. He used diagonal dribbles from the left wing and tried to combine with the attackers. However, he was often isolated in an uninspired attack where every player more or less played on his own.

Palmeiras decides the game quick into the second half

Fluminense’s possession spells continued until half-time and Palmeiras was happy to defend their lead. Coming into the second half, the hosts were able to threaten their opponents on the counter. Fluminense showed the same problems with vertical compactness Palmeiras suffered from in the first half. The difference was, that the guests left huge gaps that were exploited.

When Fluminense had the ball in the final third, The one-third of the pitch that is closest to the opposition’s goal. midfielders Airton and Ganso did not move up accordingly, but stayed too deep. If the ball was lost, they were not able to win it back with counterpressing. After losing possession, a team immediately moves towards the ball as a unit to regain possession, or at least slow down the pace of the counterattack. They neither dropped to support their defenders and were overplayed easily. Both center-backs stayed way too deep in possession as well and dropped too fast when the ball was lost.

Palmeiras exploited the spaces left by the midfielders and advanced fullbacks and consequently scored the second goal. Just a few minutes later, Luiz Adriano completed his hat-trick to seal the three points. 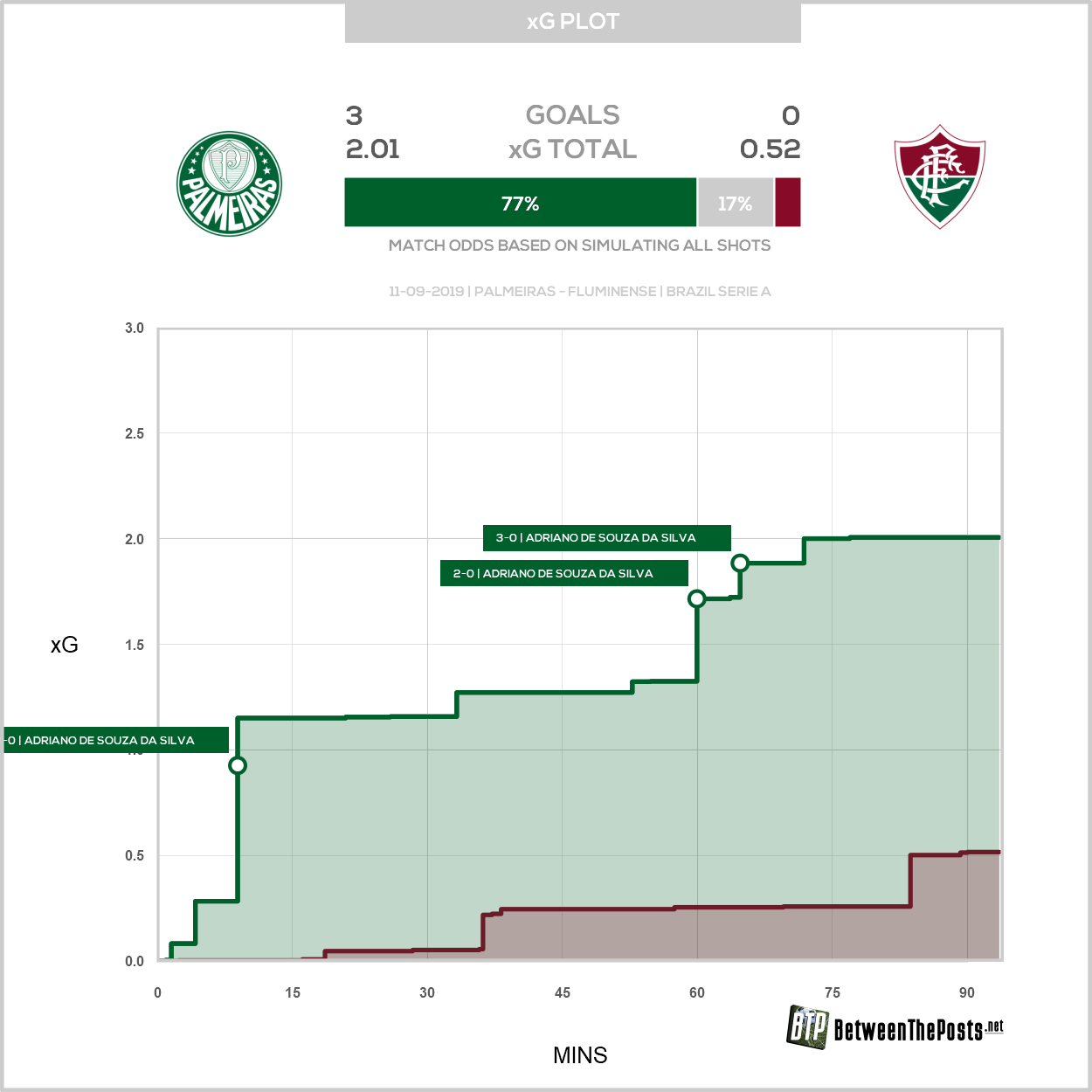 The last thirty minutes were meaningless considering the outcome of the game, but underlined where the managers have to work on. Palmeiras started the game with entertaining possession football which was already a big difference compared to the last  – or perhaps all – games under Scolari. However, they just did so for ten minutes. After the first goal, they started to defend with good pressing which was led down by a defensive line that was too deep.

With time, the quality of the overall pressing declined. Maybe this was down to the scoreline, but the intensity and compactness was worrying. The gaps between the lines were getting bigger and Fluminense advanced to the box with ease. If it were against a better opponent, this weakness could have been exploited more.

Oswaldo de Oliveira has lots to do if he wants to avoid relegation. The back-four has to improve when it comes to shifting. Palmeiras threatened this weakness just for ten minutes and worked the ball into the penalty area multiple times. In addition to that, the attacking game is uninspired and the only threat comes from Henrique. The attackers did not look to create useful staggerings to play combination football and looked a bit lost.

The Brazilian league is yet to reach the halfway point, but things are not looking good for Fluminense if they do not change anything.