Palmeiras made quick tactical adjustments early on, inviting the São Paulo pressure and hitting them expertly on the break. Excellent matches from Felipe Melo, Dudu, and Deyverson buoyed the hosts, as the triumvirate stymied the visitor’s possession offense and exposed a disjointed backline.

Only three losses all year and yet Palmeiras continue to chase down a stubborn Flamengo side at the top of the table. Four straight matches without a loss has helped to vault manager Mano Menezes’ side back to within eight points of their rivals, but they will have to continue winning as they prepare for a potentially title-deciding fixture against Flamengo at the start of December.

Matches now coming thick-and-fast, Menezes maintained his preferred 4-2-3-1 formation against São Paulo, but was forced to rotate the squad that collected a win against Avaí three nights earlier. Wéverton made his twenty-third start in goal with Gustavo Gómez and Vitor Hugo screening him in central defense. At fullback Menezes selected Marcos Rocha and Diogo Barbosa, while Felipe Melo and captain, Bruno Henrique patrolled the base of midfield. Dudu, Gustavo Scarpa and Zé Rafael, sat in front of the holding tandem, while Deyverson was preferred at striker.

For their part, São Paulo continue to scrap with Grêmio for fourth place and the final automatic berth into the Copa Libertadores. A recent dip in form that has seen the side go 5-3-3 since the start of September and has the pressure mounting on manager Fernando Diniz, who is still contended with the high expectations brought on by the arrival of Dani Alves, Tchê Tchê and Juanfran.

Diniz and São Paulo are coming off a win against Atlético Mineiro, but like Menezes and Palmeiras, the frequency of fixtures has forced him into heavy squad rotation. That said, on Wednesday night Fernando Volpi, Bruno Alves and Robert Alboleda maintained their spots at keeper and center-back, respectively. Dani Alves entered the side at right back, joining Reinaldo on the opposite flank, while Luan Santos was preferred as the lone defensive midfielder in Diniz’s 4-1-4-1 formation. The front five was made up of Vitor Bueno, Igor Gomes, Tchê Tchê and Antony with Alexandre Pato earning his fifth straight start up top.

Palmeiras began the match looking to play out of the back, but were met with an intractable São Paulo high block, A high block refers to a team that regularly leaves their own half out of possession, to disrupt their opponents far into the attacking half. which proved effective in forcing the hosts back into their defensive third. Nonetheless, recognizing they were unable to work the ball through the visitor’s midfield, Palmeiras quickly started hitting long balls into Dayverson, who held the ball up effectively – allowing Menezes’ side easy access to the second phase.

Meanwhile, as is their want, São Paulo committed to building play from the back and watched as Palmeiras opted out of a press, in place of a 4-1-2-3 high block that filtered the São Paulo offense toward the flanks. Palmeiras was unbothered by the fact that São Paulo was progressing the ball into their defensive third along the wings, as Felipe Melo and Henrique ensured their access to the center of the pitch was limited. 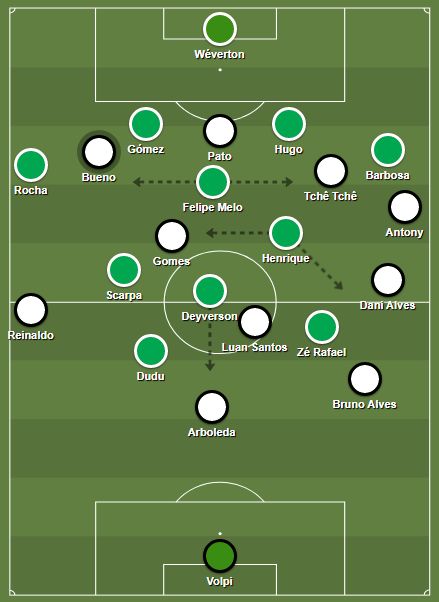 São Paulo tried to break down the Palmeiras defense by bringing Dani Alves high up the pitch and into inverted positions. Alves’ positioning saw SPFC probe the right flank with regularity, while Reinaldo maintained a wide position on the left flank, as Luan Santos oscillated between the two wings – joining in the overloads. When one team has more players in a certain area or zone than the other team. This offensive set, while deft at keeping possession, left São Paulo with a highly exposed two-man defensive line.

At this point, Palmeiras were alert to São Paulo’s offensive positioning, while Diniz had not yet adjusted to the hosts change in formation. Therefore, when Palmeiras was able to collect the ball in the defensive third they immediately struck long balls towards the gaps left on the wings, or played passes into the feet of Deyverson, who quickly shifted the ball to Dudu or Scarpi, both of whom made angled runs towards the flanks.

It was this type of quick counter that led to the first goal, which saw the right back, Rocha, hit a ball over Reinaldo, for Dudu to run onto near the right corner flag. Reinaldo’s advanced position meant Arboleda had to sprint to cover the advancing Palmeiras attack and promptly misplayed the ball, which landed at the feet of Deyverson, who struck a vicious shot directly at Volpi. Unable to collect the ball, Volpi spilled it into the center of the eighteen-yard box where Henrique was able to run onto it and score with a straight-forward header. 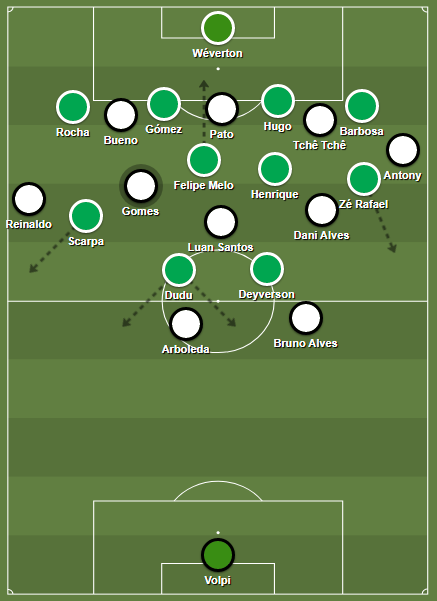 This sequence guided Palmeiras through the half and was made possible because of the excellent positioning of Felipe Melo in the defensive third. The veteran drifted around the center of the Palmeiras’ defensive set – keeping São Paulo’s possession contained to the flanks. On the rare occasion when the visitors progressed the ball into a dangerous area for a cross, Felipe Melo tucked into the back four and played as an extra center-back – negating any opportunity for a successful ball into the box.

On the offensive side of the ball, the relationship between Deyverson and Dudu proved crucial. The striker was excellent at holding the ball up and ensured that he either earned a foul – slowing play in the process – or connected with Dudu, who was making varied runs off his shoulders. Once the ball found Dudu in space it was a trigger for Scrapa and Zé Rafael to rush forward and overwhelm the undermanned São Paulo defense.

Late in the second half, this type of transition forced the São Paulo backline into a hasty header out of touch. The clearance resulted in a corner and a well placed cross from Dudu found the head of Felipe Melo  – doubling the Palmeiras lead three minutes before the break. 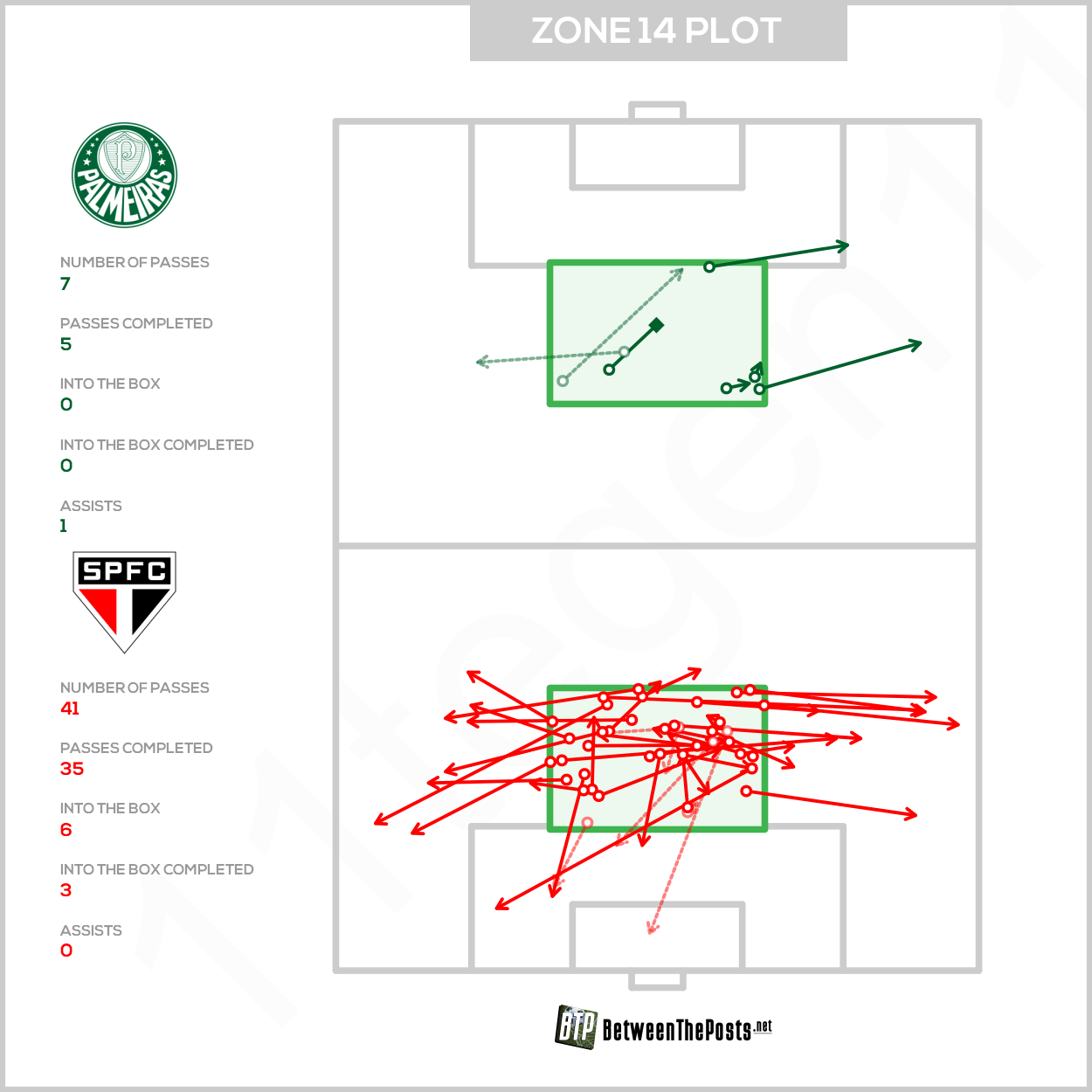 Diniz made a substitution to start the second half – bringing on right back, Igor Vinicius, in place of Luan Santos. The change pushed Dani Alves into an attacking midfield role, while Tchê Tchê dropped into the holding role evacuated by Santos. The adjustment relinquished Alves of the bulk of his defensive responsibilities, while allowing him a freer role in the center of the park.

Nevertheless, São Paulo continued to struggle to find space offensively, as Pato and Gomes were unable to establish themselves on the ball in the attacking third. Frustrated, São Paulo committed more bodies into central areas, as they tried to overwhelm the Palmeiras low block. A low block refers to a team that retreats deep in their own half out of possession, generally only disrupting their opponents around their own box.

The tactic did bring about a corner in the 56th minute, but it resulted in a disappointing delivery, which was collected easily by Wéverton. The keeper used the opportunity to start a rapid Palmeiras counter – rolling the ball out to Zé Rafael at the edge of the box. In the meantime, Dudu had made a breakneck run to the halfway line – stretching out the two visiting center-backs – so that his teammate had twenty-yards of space in which to run. By the time Zé Rafael arrived at the halfway line Scarpa had joined him. The ball was promptly released to the midfielder, who was left with only the keeper to beat. He made no mistake and tripled Palmeiras’ lead.

In search of offensive satiation, São Paulo poured men forward – tucking the fullbacks further inside, as they tried – in vain – to overwhelm Palmeiras in the center of the pitch. The end product was a very narrow visiting formation, which made it easier for the Palmeiras fullbacks to defend their markers. The São Paulo wing players refused overlap When a wide player, most of the times a wing-back, runs outside to fill in the space left by a winger going inside with or without the ball, this is called overlapping. on the flanks in favour of holding positions in the box. This meant that when the guests did deliver balls into the area they were from atypical angles and easier for the center-backs to clear. 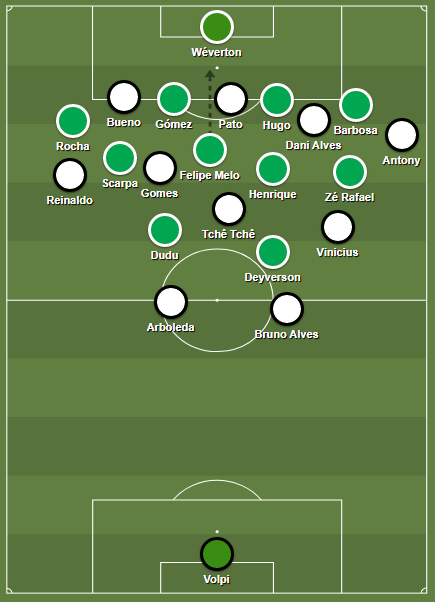 In keeping with the trend of the match, Palmeiras incessantly hit balls into the chest and feet of Deyverson, who dutifully collected them and started his side’s lethal counterattack, which came close to adding another two goals before the final whistle. 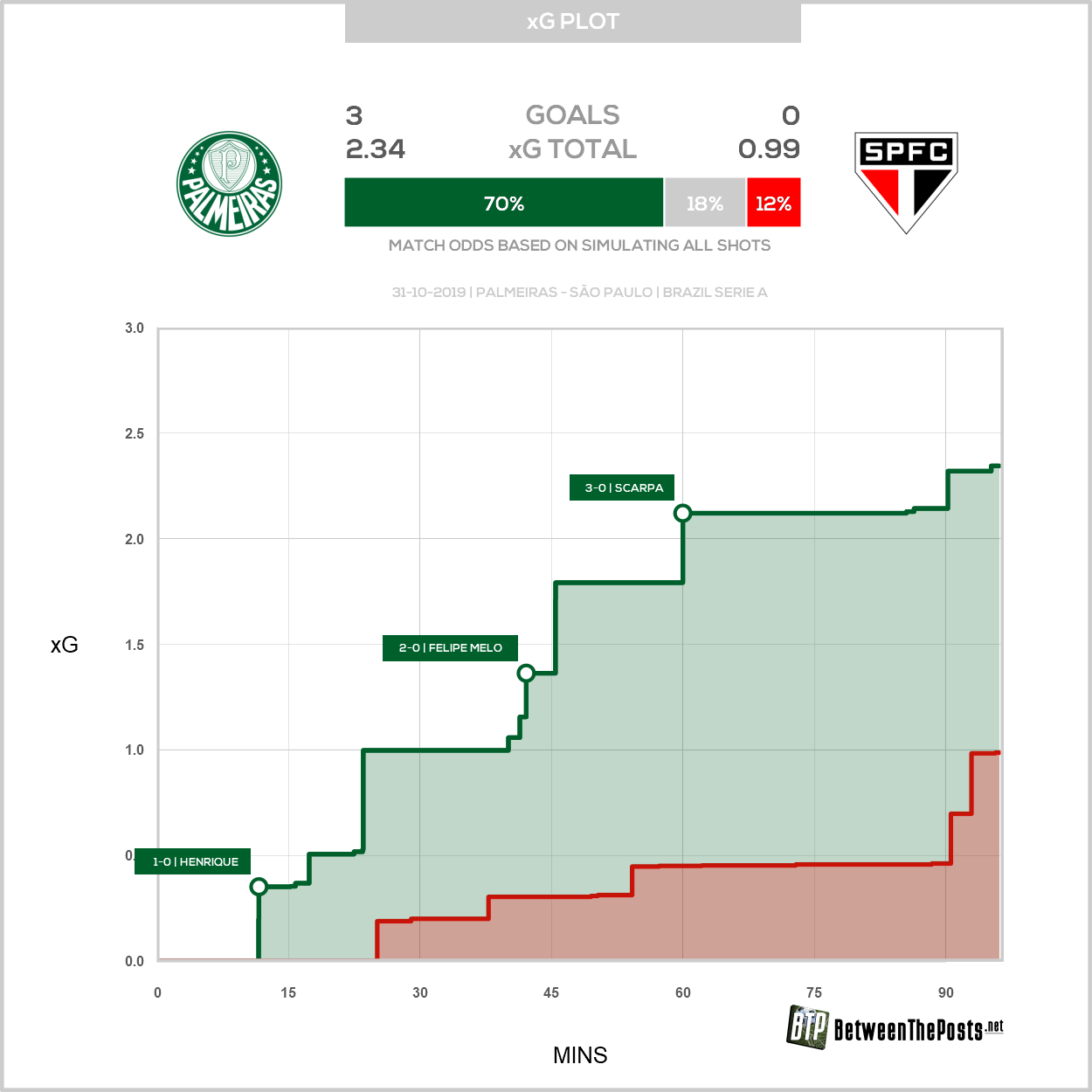 The win galvanized Menezes’ approach and more importantly keeps Palmeiras in the hunt for the league title. A number of things need to go right for the second-place side, but winning their own matches is paramount. It is integral that Menezes and his men do enough to force meaning on their December fixture with table-topping Flamengo.

São Paulo were humbled away from home and for the first time chastened defensively. Diniz has to be slightly worried that Palmeiras’ approach could be a blueprint for other sides as they game plan for him team. Moreover, the level of possession and lack of offensive production continues to be worrisome and with meaningful matches against Santos, Grêmio and Internacional still remaining, Diniz is going to have to find goals somewhere.