PAOK Saloniki gave Ajax a true run for their money, mainly by making the most of Ajax’s unorganized defense in moments of transition. After manager Erik Ten Hag adjusted his team’s buildup at half-time, Ajax took back control, scored an equalizer and dominated the rest of the match.

In 2019, the champion of Greece and the champion of the Netherlands have to face off in a qualification match to reach the Champions League, because four countries are deemed so special they possess a total of sixteen guaranteed starting spots. Even though that seems unfair, it does mean we got to see an interesting clash between two contrasting styles.

Greece is not a country that gets a lot of attention in terms of football coverage, so you would be forgiven for having missed that PAOK have steamrolled everyone else there, last season. They won the league unbeaten and grabbed the cup, earning manager Răzvan Lucescu a transfer to Saudi Arabia.

In their sturdy 4-4-2 formation, off-the-ball behaviors are disciplined, transitions from defense to attack are sharp, and set-pieces are great. Therefore, PAOK can be seen as exactly one of those opponents Ajax would have wished to avoid so early in the season. Eyecatchers: Dutch winger Diego Biseswar and second striker Dimitris Pelkas.

Ajax… Well, we all watched Ajax last season right? Not a lot has changed in their style of play, although there have been some personnel changes. Perr Schuurs – promoted from the second team – and Lisandro Martínez – bought from Defensa y Justicia – formed the central defensive duo. Joël Veltman seems to be the starting right back for now. The double pivot 4-2-3-1 is one of the most frequently occurring formations in football. The two most defensive midfielders are called a ‘double pivot’. has largely been formed by Daley Blind and Răzvan Marin – bought from Standard Liège – even though Noussair Mazraoui replaced the latter for this match. Up front, Kasper Dolberg has consistently gotten the nod, supported by the illustrious trio Dusan Tadić, Donny van de Beek and Hakim Ziyech.

Ajax’s way of building up was a big problem for every team they faced last season, because of its flexibility. Their buildup often started with three defenders and one or two midfielders in support. Throughout the season, the players became so apt at changing positions and picking out vertical passes, it became impossible to stop them.

Last season, Mazraoui could come into the double pivot in the blink of an eye, freeing up a pass to Ziyech. Blind calmly rotated into midfield if he saw space, Matthijs de Ligt seldom misplaced a pass and Frenkie de Jong was everywhere, turning away from onrushing attackers for fun, making Ajax nearly impossible to press because of their flexibility.

Against PAOK, things were a lot more static than they were last season, yet not ineffective. 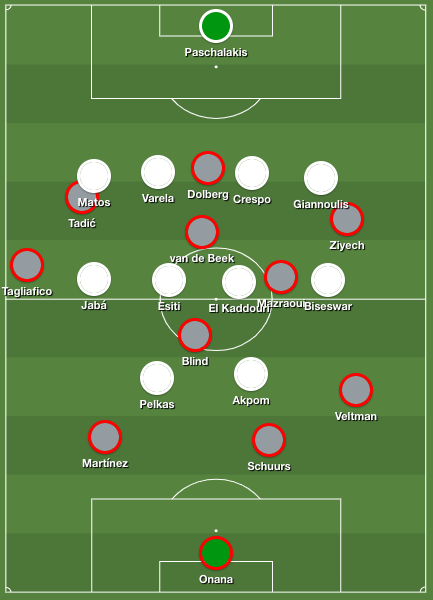 Frequently occurring buildup situation for Ajax in the first half, when central defenders were on the ball.

Veltman, the right back. almost played as a center-back in possession, while Nicolás Tagliafico pushed up further. PAOK put op their trademark zonal 4-4-2 shape, as the two strikers were instructed to make sure Daley Blind could not get on the ball in their backs.

Therefore, Blind was mostly neutralized in opening proceedings. However, as soon as he started to move further wide in order to receive the ball, one of PAOK’s central midfielders Anderson Esiti or Omar El Kaddouri had to step out to apply pressure and make sure Blind could not turn forward and pick out a pass.

As a result, a common way to progress the ball for Ajax came in the back of Esiti or El Kaddouri. One of Hakim Ziyech or Donny van de Beek would move into either halfspace If you divide the field in five vertical lanes, the halfspaces are the lanes that are not on the wing and not in the center. Because there is no touchline like on the wing, players have the freedom to go everywhere. But this zone often is not as well-defended as the very center. This makes it a very valuable offensive zone to play in and a lot of chances are created by passes or dribbles from the halfspace. or flank to receive the ball and play it forward. 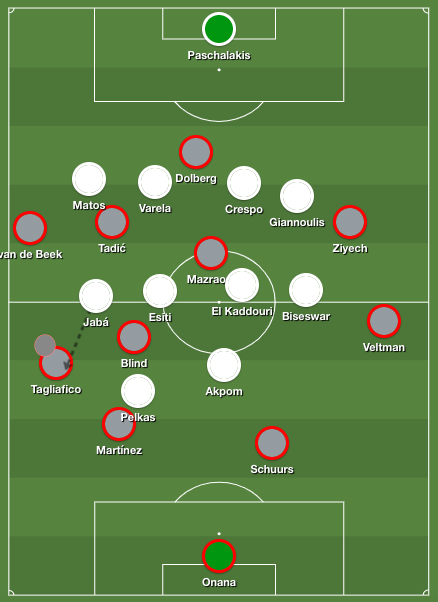 That way, Ajax were pretty comfortable in progressing the ball up the field. They had not created a big chance however, before scoring the opener in the tenth minute, courtesy of a whipped set-piece delivery by Ziyech and an own goal by Dimitris Giannoulis.

PAOK can do more than defend

One would assume Ajax would assert their dominance after scoring the opener. However, after scoring, they started to commit more turnovers, which turned into dangerous counterattacks for PAOK.

After initially living off Ajax’s turnovers, PAOK showed they can play some football themselves as well. Reminiscent of Abel Ferreira’s Braga, in their longer possession spells, they played in a 3-2-4-1 shape, with the fullbacks pushing up and one of the midfielders dropping deeper. Their best move came in the seventeenth minute, when Jabá was brought into possession after a seven-pass move from the back, went one-versus-one with Tagliafico and Schuurs and was fouled on the edge of the box.

Ajax were giving up more of the ball in this phase, yet what really cost them, was a moment of bad pressing. In the 31st minute, Mazraoui stepped up the field to press, while Blind stepped sideways. Crucially, the defense did not take a step forward. The distance from the forward line to the back line was about fifty yards at this point. Not great, Bob! 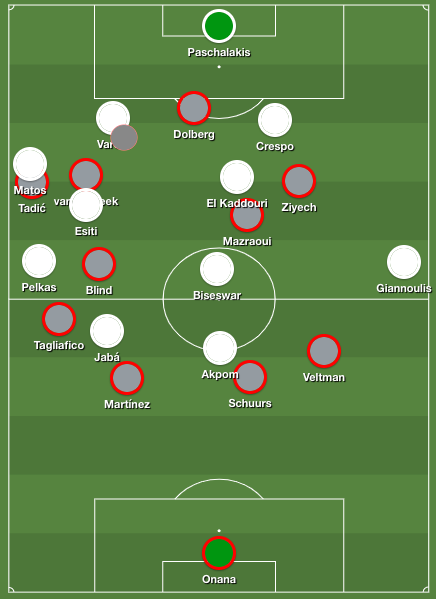 Situation leading up to PAOK’s goal. Mazraoui and Blind out of position, defense too far back.

The crucial element in any form of pressing is that every player is one the same page. PAOK’s first goal is a textbook example of what should never happen: two midfielders leave the center of the pitch at once, while the back line drops back. Recipe for disaster, and it showed, as PAOK made use of all the afforded space and scored the equalizer.

Now, Ajax’s four crucial positions in this process (two central defenders plus two holding midfielders) were all occupied by players who did not play on those positions last season. And have never played as a quartet before, which is probably the reason why their pressing was not optimal.

The fifteen minutes before half-time were PAOK’s best of the match, and they created multiple opportunities to score. Ajax were pinned back in their own half and could not get out. With a beautifully worked set-piece routine, Ferreira’s team grabbed the lead in the 39th minute, and it’s hard to argue against PAOK as leaders at half-time. 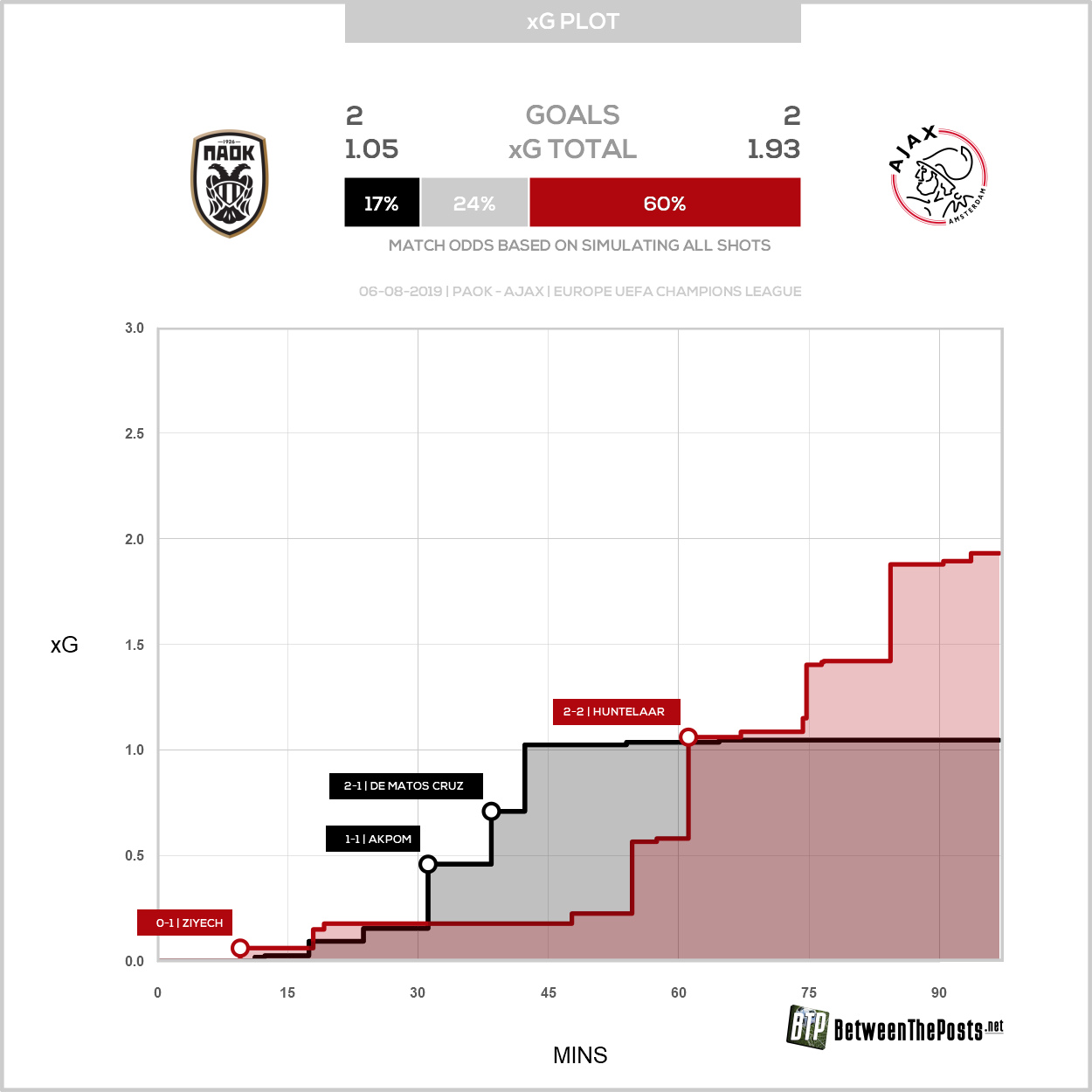 Throughout the entire first half, PAOK’s defensive organization had been excellent. Because Ajax did not play with real wingers and their fullbacks Veltman and Tagliafico did not overlap When a wide player, most of the times a wing-back, runs outside to fill in the space left by a winger going inside with or without the ball, this is called overlapping. much, PAOK were able to keep things very compact.

In the second half, Ajax made an important change to the buildup. Blind often dropped into defense, the fullbacks pushed up along the touchline and Mazraoui took Blind’s position between PAOK’s attackers and midfielders. Not only did this stretch PAOK both horizontally and vertically, it also gave Blind more time on the ball to pick out vertical passes, something he executed perfectly. 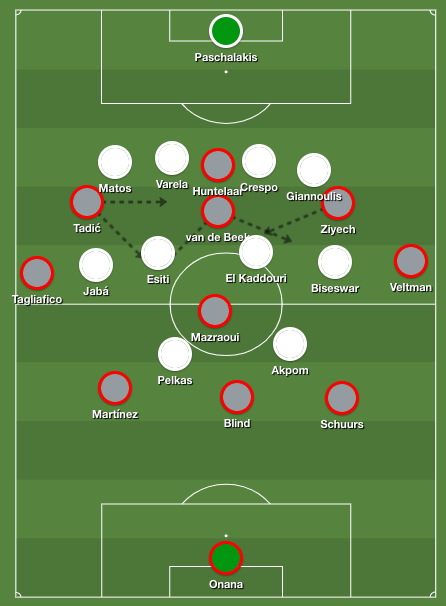 The way Ajax used Blind in the buildup in the second half. Incidentally, Blind would also pop up as the right center-back, the left center-back or stay in midfield.

Sure, having versatile players like Daley Blind and Noussair Mazraoui helps, yet it is a sign of an elite manager to recognize exactly what is needed to counter the tactical plan of the opponent. Even though Ajax still had some uncoordinated moments when the ball was lost, they controlled the entire match from that point on.

After Ziyech missed a huge chance in the fiftieth minute, five minutes later, Huntelaar equalized for Ajax. The veteran Dutch striker came into the match in the first half for the injured Dolberg, added little to Ajax’s final third The one-third of the pitch that is closest to the opposition’s goal. combinations, yet got on the score sheet because PAOK defender Varela attempted to clear a cross and pinballed the ball in his own goal, via Huntelaar’s leg.

It would be flattering to say PAOK did anything else than sit back in their 4-4-2 / 4-4-1-1 low block A low block refers to a team that retreats deep in their own half out of possession, generally only disrupting their opponents around their own box. after this point. Even though Ajax had now added more width to their game, PAOK’s two banks of four kept an extremely narrow stance, meaning that even for experienced space probers like van de Beek, Ziyech and Tadić, it was hard to create a huge amount of chances. As a result, the game ended level.

Paradoxically, both teams will feel okay about that result, as PAOK would have settled for a draw beforehand and Ajax will feel happy they could avoid a loss, given the early adversity. 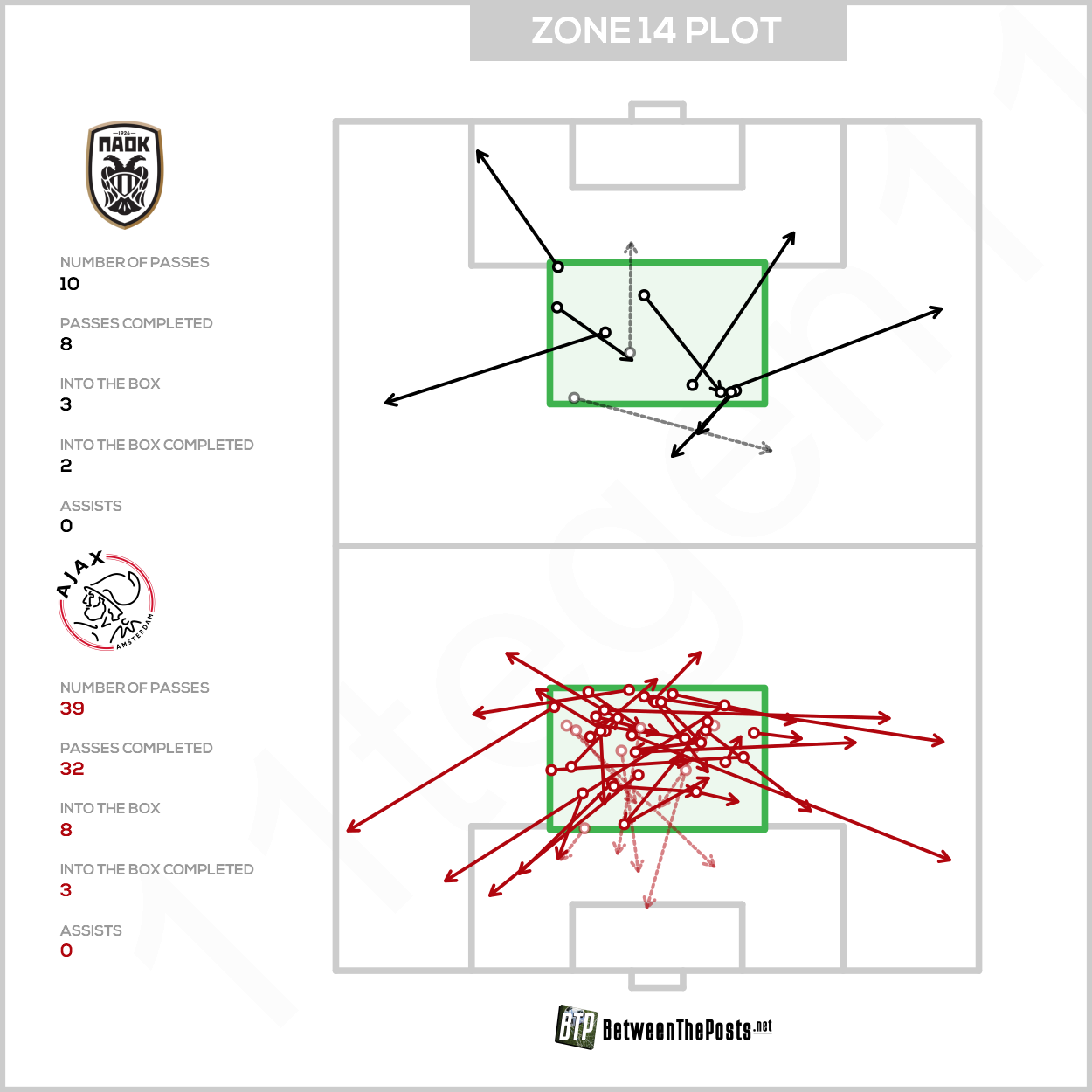 End of the day, Ajax did have a lot of territorial dominance, but hardly found any passes into the box from Zone 14.

This match would probably be a lot less even if it was played in March or April, when Ajax have had enough time to digest the turnovers in their starting eleven. It is August, though, and the truth is: on their day, this well-drilled PAOK team can get a result against this Ajax.

For the return, Ferreira will have to think of a plan to combat Ten Hag’s second half setup, though, because as soon as Ajax started playing that way, PAOK had a very hard time in this match. Considering Ajax reached the semi-final last season and a lot of the players that did so are still around now serves as a huge compliment to PAOK. Can they pull off the biggest stunt of this early Champions League season? 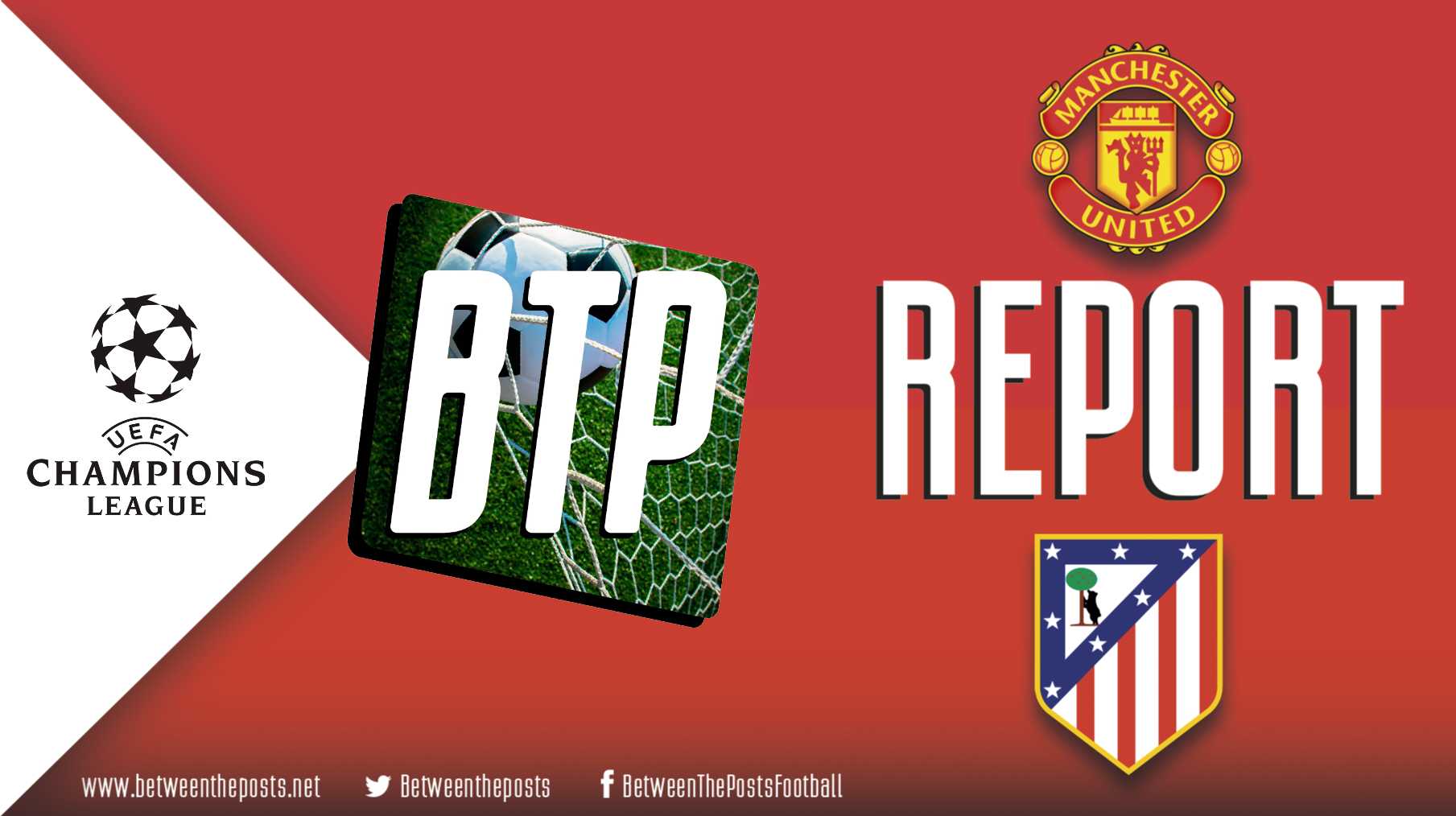