Coasting in Ligue 1, PSG looked to wrap up the three points in prompt fashion upon welcoming Monaco to the capital. And it proved to be the case in a clash where a familiar face to both clubs delivered a knockout blow to his old employers, giving the Parisians more leeway at the top.

How does one assess a side where everything and nothing is on the line? Now sure of a place in the last 16 of the Champions League, PSG have posed this familiar question. Back to back draws have still left the Parisians eleven points clear at the top of the league table, where star quality has trumped a lack of group chemistry. So with only domestic fixtures to take care of to finish the calendar year, another three points here would edge the home team a little closer to taking back their crown.

On the road to redemption from the sack at Bayern Munich, Niko Kovač has hit a snag in his second year at the helm once more. Messing up a playoff shootout to sneak into the Champions League, his men straggled in mid-table at the turn of the month. However, seven goals and six points from their last two games in Ligue 1 have signaled a turnaround; would they now lay down a decisive marker?

Mauricio Pochettino set up his men in a 4-3-3 shape. Neymar’s lengthy spell on the sidelines with ankle ligament damage has spared him at least one selection headache. So, running out a front three of Kylian Mbappé, Lionel Messi, and Ángel di María, he made one change to the team that beat Club Brugge 4-1 last time out. Juan Bernat came in at left back for Nuno Mendes, absent with a leg injury.

Sticking to a 4-2-3-1 shape, Kovač rotated his starting eleven off the back of a 1-1 draw with Sturm Graz in the Europa League. Only four men held onto their shirts from midweek: Caio Henrique, Aurélien Tchouaméni, Aleksandr Golovin, and Wissam Ben Yedder. Among those to return to the lineup was 21 year old Sofiane Diop, who aimed to score for the third league match in a row.

PSG take the sting out of Monaco’s energetic opening

From the off, the away team pressed high up the pitch. Lining up in a 4-2-3-1 block, they did not deviate away from this shape off the ball. Thus, Diop did not move into the frontline next to Ben Yedder, mainly orienting himself to Marco Verratti. To the outside of Diop, the wingers would often make up for the 2-on-1 inferiority that their side faced against PSG’s buildup. In turn, Monaco’s pressing scheme used a shifting fullback in the form of left back Caio Henrique to control the width. Indeed, under two minutes after kickoff, this strategy nearly bore fruit. 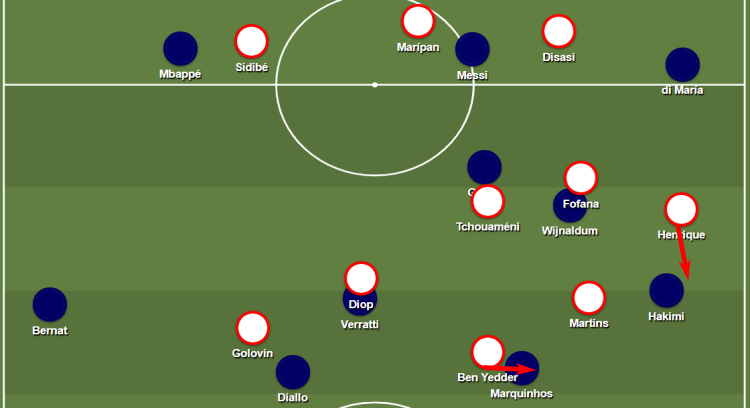 14th minute: A pressing sequence from Monaco in the first half. Diop covers Verratti and Golovin pushes inward to press Abdou Diallo, who shifts the play to Marquinhos. Ben Yedder continues to squeeze the ball, forcing the center-back to hit an inaccurate long ball. The rest of the back four shuttles laterally.

Nicking the ball from the six, who had roamed out to the left flank, Diop broke into the final third. Ben Yedder then peeled to the right of Abdou Diallo, offering himself as an option before sliding a cutback to his teammate. The attacking midfielder beat Gianluigi Donnarumma but his strike came back off the bar, giving the Parisians a lifeline. But, in the end, it was the hosts that took the lead in next to no time.

Messi and di María linked up on the edge of the box, teeing up the latter to draw a corner kick from Axel Disasi. Mbappé quickly took the routine, tapping the ball to the right winger, whose elusive chop saw him skip away from Djibril Sidibé. From here, the fullback could only foul his opposite man, giving away a penalty. Mbappé stepped up from twelve yards, coolly slotting a strike past Alexander Nübel into the back of the net. Monaco bred, Paris born, the forward aptly showed where his loyalties lay.

Monaco rise to the challenge

However, the setback did not knock the wind out of the visitors’ sails. Controlling much of the play, they rotated from their 4-2-3-1 setup on the ball. A typical 3-2-4-1 offensive structure emerged, where Henrique moved higher on the left flank than Sidibé, who held off to form a back three. From here, the right back would venture into the final third if his side had settled in PSG’s half of the field. 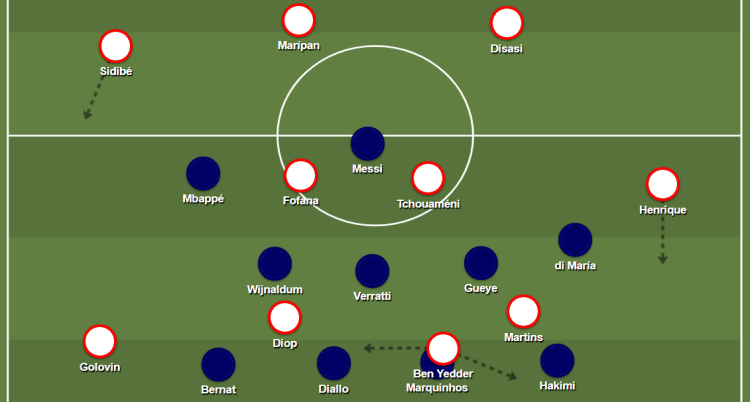 Monaco’s 3-2-4-1 offensive structure before Martins and Golovin swap flanks with an asymmetry between the fullbacks and a flat double pivot.

Ahead of the double pivot, the quartet of attackers had the license to probe. Diop tended to move over to the right halfspace while Golovin stayed wide on the right wing. From around twenty minutes into the contest, the Russian forward operated on the left while Gelson Martins had taken his place on the right.

But the switch did little to change their fortunes around the box. On their part, PSG sat off well in an asymmetric 4-3-3 block. Especially in the opening stages of the game, Idrissa Gueye slipped out to the left flank behind Mbappé, who lurked higher next to Messi in the frontline. To the right, di María continually dropped back to keep an eye on Henrique, whose movement onto the last line could force the Parisians into a back five. Unable to find a creative punch, Kovač’s men soon paid for a lack of incision.

Youssouf Fofana swiveled to find Disasi, only for loose delivery to sell short the central defender. Messi pounced, breaking over the halfway line to draw Guillermo Marípan inward before slipping the play out to Mbappé on his left. His teammate steadied himself, shaping up to bend an effort into the bottom right corner of the net, where the ball nestled moments later. 2-0 PSG on the stroke of half time.

Making a home for Messi

Eager to swing the tide, Kovač made a change ahead of the second half. Ismail Jakobs replaced Henrique on the left of the back four, hoping to offer more thrust in the attack. From the other dugout, an injury forced Pochettino’s hand. Bernat pulled up with a strain to his hamstring, prompting tinkering in the backline. Rather than deputizing at left back, Thilo Kehrer joined Marquinhos at the heart of the back four. Diallo then moved out to Bernat’s spot, where he has frequently featured for the Parisians.

Monaco’s press wore off as the game went on, letting the home team show off more of what they have to offer on the ball. As was the case against Club Brugge in midweek, Messi played in the middle of the front three. However, if he were not in the right halfspace, where he prefers to do his damage, the summer signing did roam into deeper zones to stitch the play forward.

From here, the Argentine’s playbook is well known but the spectacle of crafty combination play in the context of a more ball-dominant role was a welcome sight. While a goal eluded the forward, his danger in the final third grew as the game ebbed on, leaving Pochettino with a win and signs to work with at the final whistle. 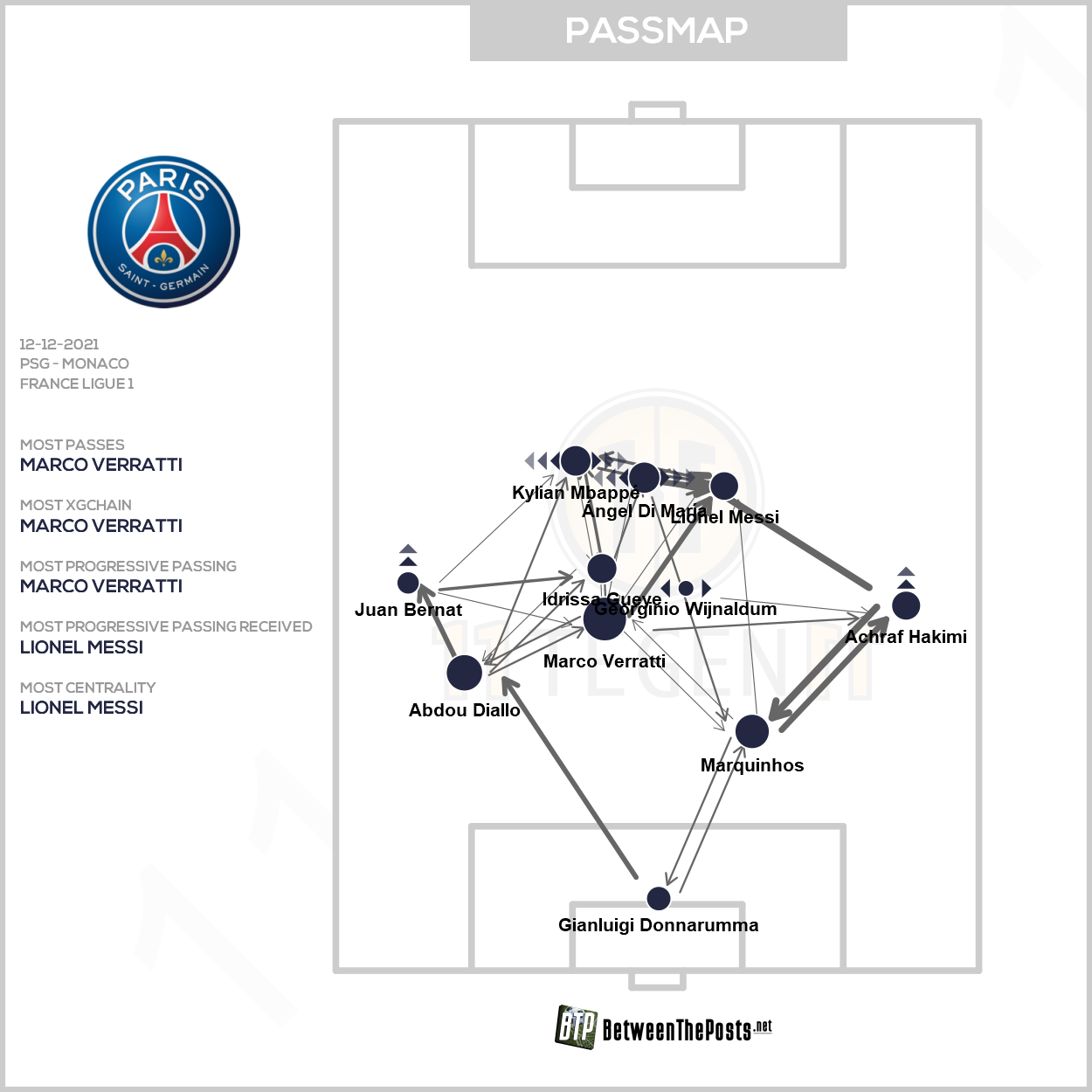 PSG move further clear at the top of the pile, sitting 13 points ahead of Marseille. So, for Pochettino, the task continues to be one of developing cohesion. He will have to manage the star names once Neymar returns in the new year, but the Brazilian’s absence affords him a chance to work with three fixed names in the attack. Perhaps this constraint will let the automatisms PSG have sorely lacked to develop at last.

Though they cooled off after the break, Monaco’s first half display offered positives to take away. Above all, their intent to press high against the threat of Mbappé, di María, and Messi set the tone for a battling performance. On the other hand, difficulties in the final third continue to show they are yet to find their groove from the end of last season. However, return to winning ways against a high-flying Rennes next time out in the league, and hopes of getting back into contention for Europe take a boost. 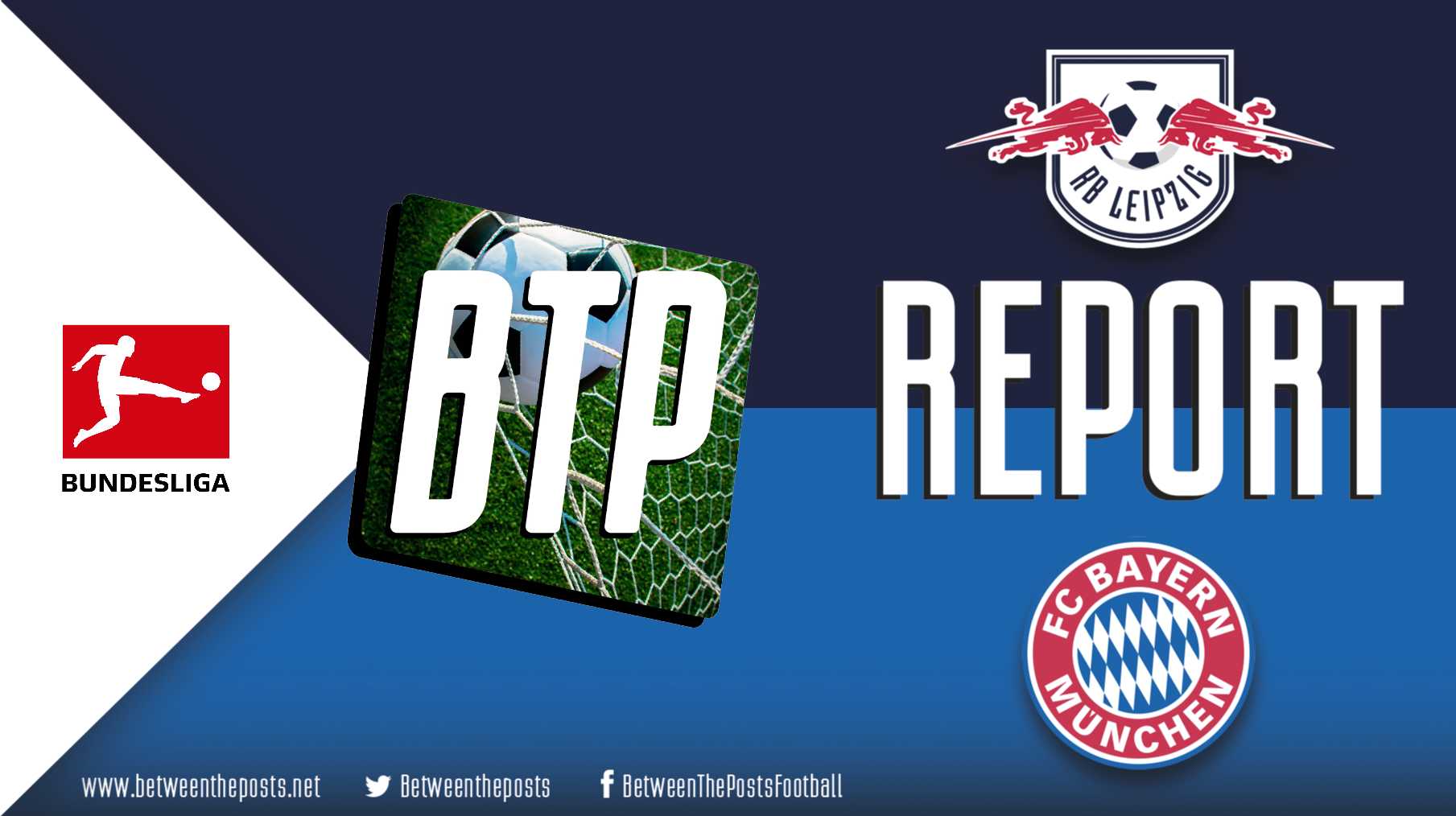