On the first Champions League day, PSG displayed an impressive performance against Zidane’s side. The hosts were dominant on literally every aspect and Thomas Tuchel showed how versatile he can be tactically on big nights.

The clash of the biggest teams of group A felt like it came a bit too early for us to see the best game possible. Indeed, both teams have been somewhat struggling since the beginning of the season. Madrid specifically are still searching for a new identity, finding a way to add new players in the mix, like Hazard, in poor physical form too. What was clear was that we could expect a game between two not fully ‘ready’ teams yet.

After starting the season in a 3-4-3 or 4-4-2 shape, Paris had to deal with the absence of their three star players in attack (Neymar suspended, Cavani and Mbappé muscularly injured). Therefore, Tuchel chose to start with all his best players available, resulting in a 4-3-3 system with a back four of Bernat, Kimpembé, Thiago Silva and Meunier. Marquinhos acted as the holding midfielder with Verratti and Gueye alongside him, and players upfront were Icardi, Di María and Sarabia. The same players could have made a logical 3-4-3 system as well, with Marquinhos in central defense but the German coach had something else in mind for this night.

Real Madrid started the game in the same 4-3-3 setup we see recently. The Spanish side had to deal with an even more weakened squad as Ramos, Modrić, Isco, Marcelo or Nacho were unable to play. The starting eleven therefore was formed by Courtois, Mendy, Militão, Varane, Carvajal, Casemiro, Kroos, James, Bale, Hazard andBenzema.The team’s shape would shift to a 4-2-3-1 formation, according to James Rodriguez’ position, naturally enjoying some freedom as number ten.

Having those teams on the field, it took PSG no more than a few seconds to start the game in a dominant way.

First half: PSG carried by Gueye and Di Maria

Immediately from the kick-off, PSG won the midfield battle. Ball possession was more or less shared between both sides – 52% in favor of PSG during the first act – but it was clear that one team was more comfortable having possession sequences higher on the field.

PSG’s animation in the 4-3-3 shape were pretty classic, with wingers cutting inside and attacking fullbacks, yet the quality and the speed they put in their passing allowed them to be comfortable in the opposition’s half and manipulate Madrid’s defensive block.

Madrid would not press very high; when they did, Paris were getting past pressure with the technical level of players like Verratti. The Spanish side would hold a more medium or low block with a certain level of passivity. Being patient in defense can be part of a plan, but beyond the passivity, Real Madrid midfielders also defended with a lot of man-orientation (where you naturally follow the movements of the opponent in the zone you’re assigned to defend). This resulted in PSG having many options to play in the final third as two or three passes were enough to catch Madrid’s midfield out of position.

Indeed, being man oriented without cancelling the opponents with the aggressiveness of pure man marking is often the best way to lose your shape and a warning sign of a team missing a clear organisation. 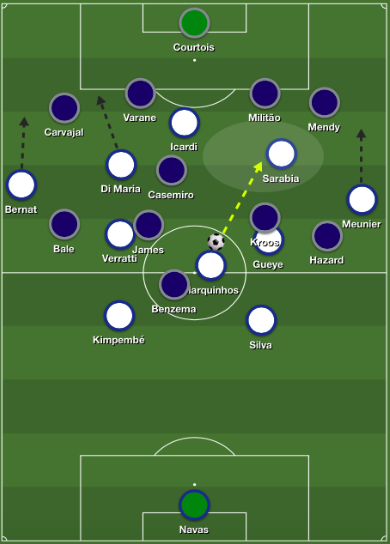 The Parisians played high, which resulted in conceding space behind the defensive line. As a consequence, Madrid had a few interesting attacking transitions to exploit during the first ten minutes. PSG would track back with intensity and restructure their shape very quickly, in order to keep those situations under control.

We could have expected PSG to use a crossing-heavy strategy. The lovely feet of Di María and Sarabia could be used to optimize Icardi’s abilities inside the box. PSG actually only crossed nine times while Icardi was on the field, most of them not even aiming at the Argentinian striker.

Instead, PSG would do something more ambitious in attack. The quality of the short combinations allowed players like Di Maria and Sarabia to be found in good positions in the inside. Unsurprisingly, the first goal came from such a situation. Marquinhos recovered a clearance and initiated a quick one-two between Bernat and Icardi, before finding Di María rushing in the box to score with a powerful front post shot. The whole action was played with one touch per player only and a great coordination, meaning PSG scored the opener after fourteen minutes.

Afterwards, PSG physically dominated Madrid and would not let them breathe using an aggressive counterpress. Gueye had a stellar night, tormenting Kroos, to whom he would not leave one millimeter of space to play. This strategy also resulted in a lot of tactical fouling all game long from every player (eight fouls to four by PSG in the first half).

Logically, the second goal came after Gueye, the engine, and Di María, the attacking force, were involved. A very high throw-in started it, when Gueye’s one-two with Marquinhos found Di María, who scored a superb near-post shot eighteen meters away from goal.

Immediately after this second goal, Bale scored an unreal volley from the outside of the box, disallowed for handball. Despite creating a few interesting situations here and there, Madrid had a very hard time to create danger in PSG’s half. Zidane likes his team to progress the ball through the wings and play a lot of crosses.

The 4-3-3 system Tuchel chose for this match allowed his team to sit in a 4-5-1 formation, which is not the most rational defensive system in all situations, but it gives a good protection of the width. PSG were able to keep the numerical superiority on the wings and deny Madrid opportunities to cross – only nine crosses conceded when Madrid cross often more than twenty five times per game. However, with Verratti and Gueye aggressive defending and pressing, sometimes the halfspace in PSG’s side would not be well-protected, but Madrid did not have much collective mechanisms to use these areas. As a matter of fact, one of the only time they did, Bale was found in an advanced position and earned a super dangerous free kick. 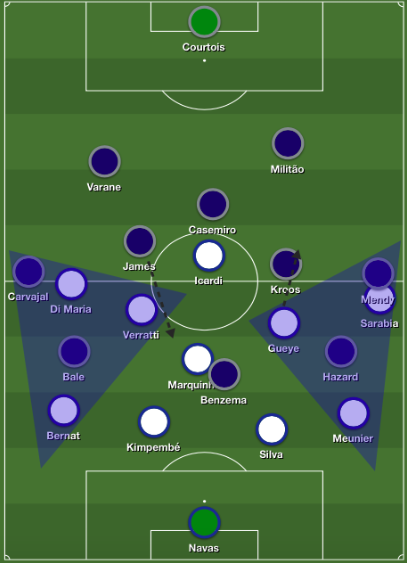 Madrid in two-against-three situations down the wings, but Verratti and Gueye would release space behind them, almost never well exploited by Madrid or well compensated by PSG in general.

Even though Madrid had more shots than PSG (six to five in the first half), those shots were mostly from the outside of the box, and not too dangerous, as you can see from the xGoals plot.

Madrid would also lose continuity by playing too quickly to Benzema typically, instead of keeping possession higher in the Parisian’s half.

Second half: PSG in control; Madrid have trouble to react

The tactical stakes remained the same returning from the dressing room. PSG still had around 52% ball possession, and Real Madrid brought no variety to their attacking actions. PSG still had the best opportunities, the first real chance of the second half came at the 60th minute, starting with a high recovery from Gueye, but Di Maria’s chipped ball went over the bar, something could have predicted easily given the first half.

After that, Choupo-Moting replaced Icardi who could not play more than an hour playing because of his current shape. As a result, PSG kept the same system, but Di María was now in a striker position, and Choupo-Moting on the left flank. This made sense, as Di María started to get tired and could not make the same physical efforts in defense. This move was immediately followed by another good chance with Di María finding Sarabia inside the box, whose shot was off target.

Ten minutes later, Zidane made a triple offensive substitution with Vazquez in for Hazard, Jović for James and then Vinícius for Bale. Substituting most of your offensive line speaks volumes about the current physical shape of the team; Real Madrid put only a little amount of energy into the game.

As a result, Real Madrid would not be dangerous on the break, and both Silva and Kimpembé kept the forwards under control, defensive reading for the Brazilian veteran, and total energy from the young World Champion.

The game carried on and Benzema would be the most threatening player after Bale did not do much in the second half before he left the pitch. With a goal disallowed for being in an offside position, a header very close to the target, he could have reduced the gap and give his team the hope to comeback, but no success this night.

Eventually during extra time, PSG counterattacked and Meunier scored, after him and Bernat were literally toying with Madrid defenders inside the box. Emphatic win for PSG in the end, and fully deserved. 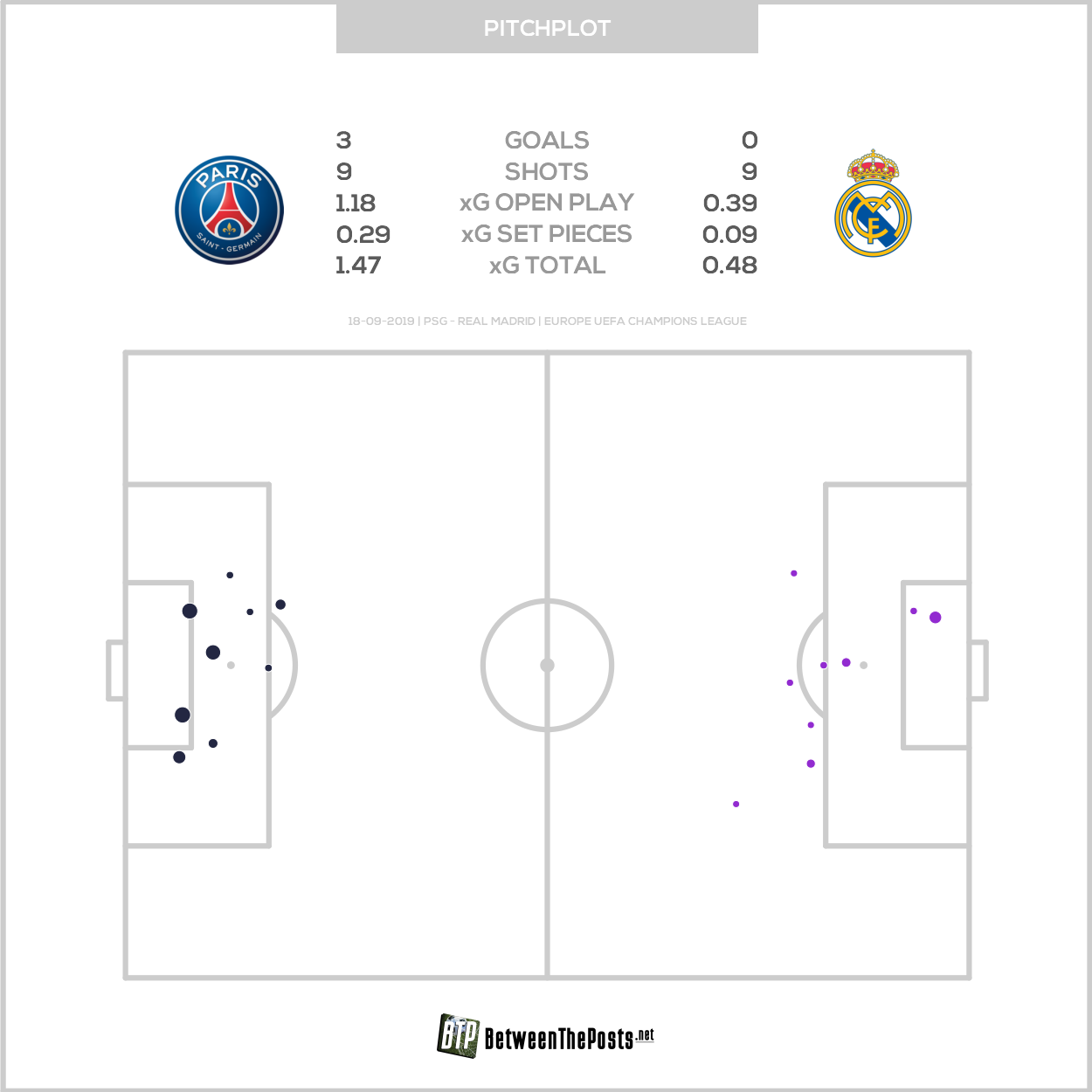 The game was actually really fun to watch, because of the tactical twist Tuchel brought to his team, coupled with some wonderful individual performances (Di María & Gueye). However, it did not have the same taste as if the game was a crucial one for the qualification with both teams in form.

The Parisian side undoubtedly deserved its victory, especially given the absence in attack and the fact the team was still looking after a top level performance since the pathetic elimination against Manchester United in March.

As for Madrid, they are still a team looking for their best football, but it is also part of the club’s DNA to not be at their peak during Autumn. The team should be qualifying for the next round no matter what, but the first place will be more difficult to conquer now.
Let’s see how Zidane will (try to) fix his team. 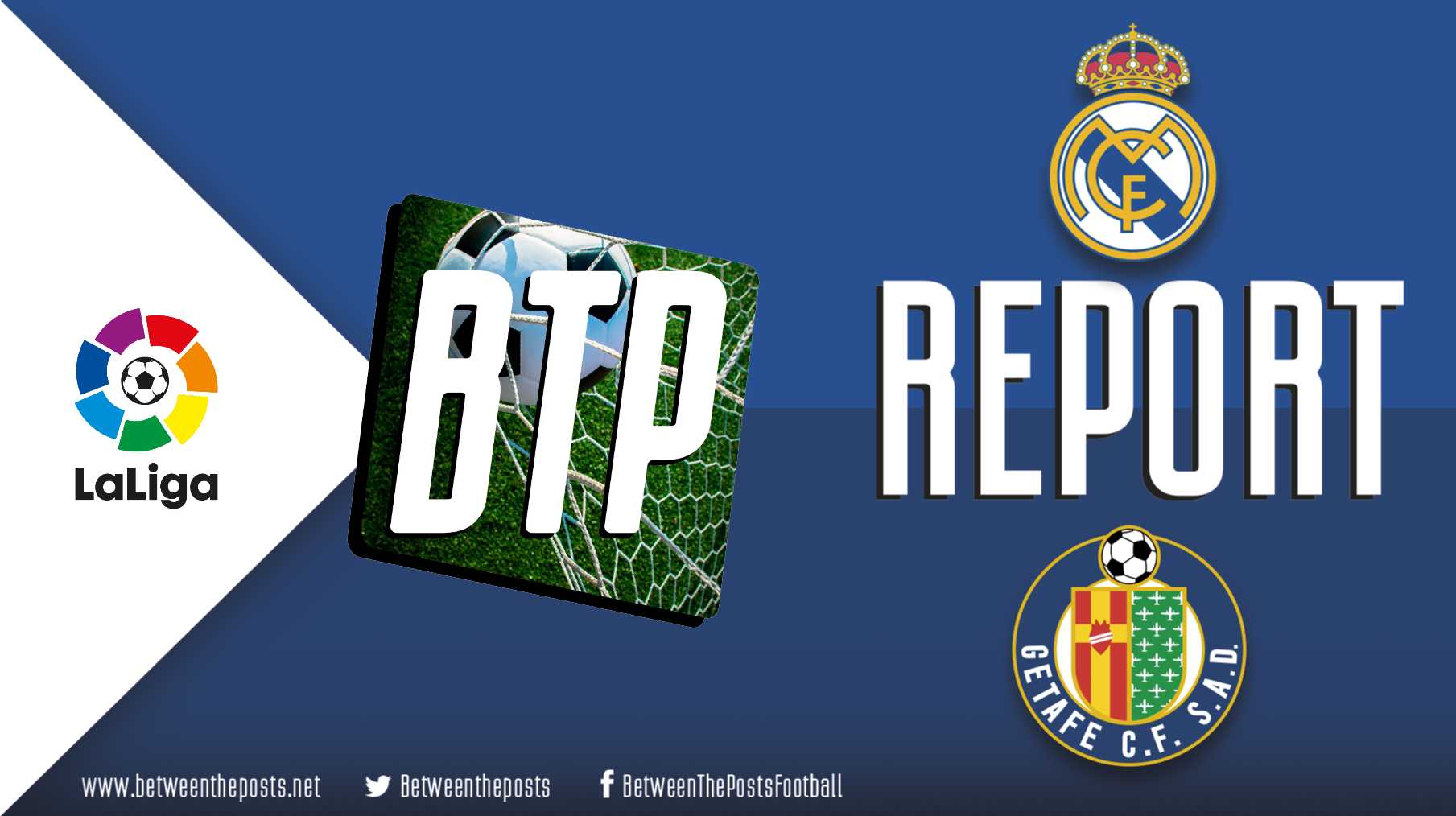 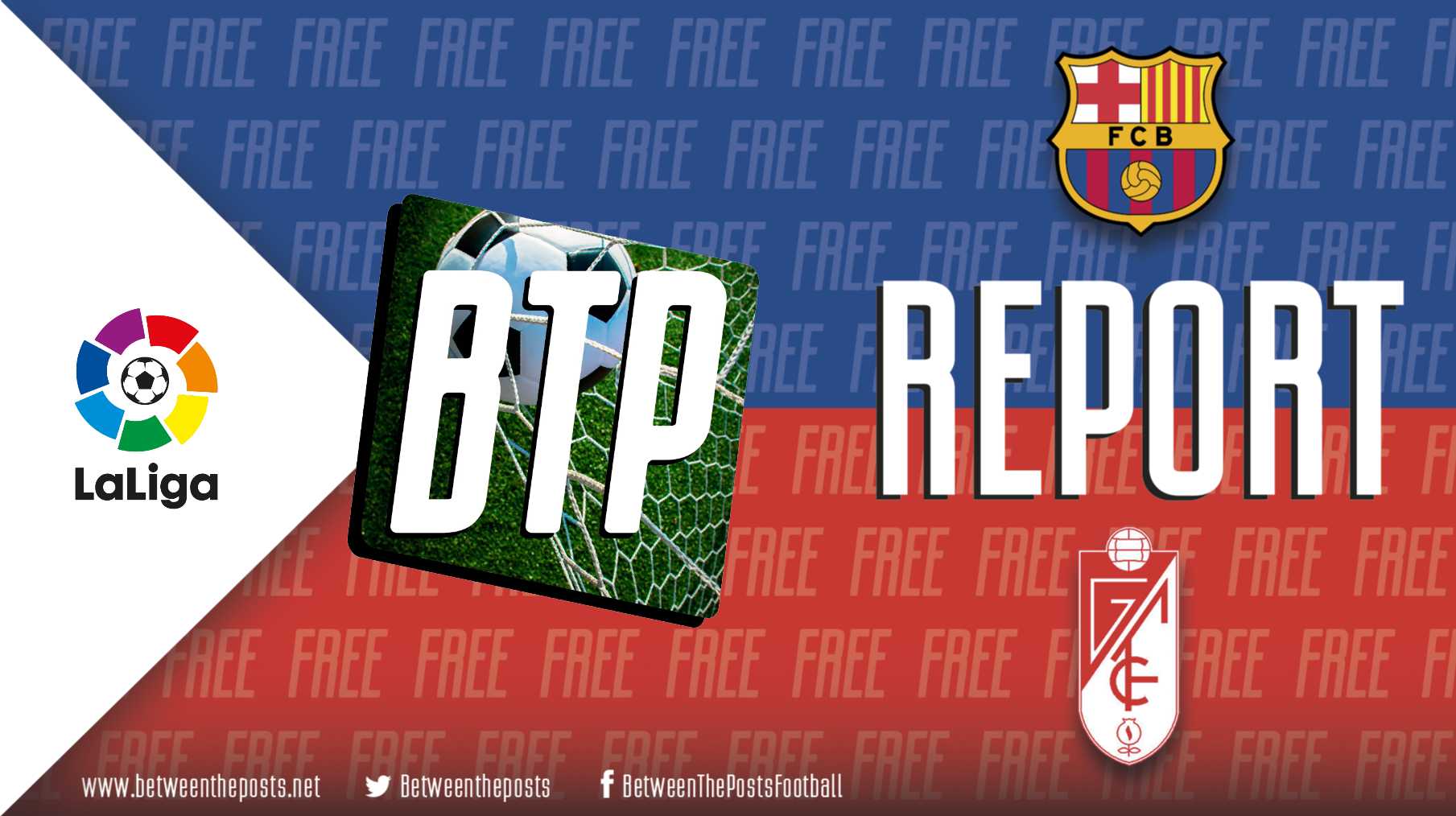