PSG have won their first prize of the season. After Rennes’ sturdy 5-3-2 defense took some time to overcome, PSG equalized early in the second half, before a beautiful Ángel Di María free kick decided the match.

China hosted the Trophée des Champions to kickstart the French season of football. Ligue 1 champions Paris Saint-Germain faced the winners of the French National Cup, Rennes, who had defeated PSG on penalties in the final, adding an extra layer to this super cup clash.

Thomas Tuchel’s PSG is identified mainly by tactical flexibility. Julien Stéphan on the other hand – who starts his first full season as head coach for Rennes – is known more for his vertical football and good defensive organization. A formula that got the better of teams like Betis or PSG last season.

Tuchel had tested two different tactical approaches during the pre-season friendly games. The so-called Champions League formula, with a 4-4-2 shape off the ball turning into a 3-5-2 setup in possession, and the Neymarless system, which was a more of a rigid 3-4-3 formation used after Neymar was injured last season.

Eventually, PSG came to this game with a more classic 4-3-3 formation, something that came as a bit of a surprise, because it was not used during pre-season. With the South Americans just coming back from the Copa América, the team was composed of players who had participated in the entire pre-season. The only exception was Marquinhos, who played in his new holding midfielder position, without any game of preparation.

Rennes took on a new system to face the Parisian giants. Last season, Stéphan would line up his team in a 4-4-2 medium block, A medium block refers to a team that retreats in their own half out of possession, generally only disrupting their opponents some way into their own half. but with changes in the squad (Ben Arfa left), and a whole host of players unavailable because they had been active in the Africa Cup of Nations, Stéphan chose to set his team in a defensive 5-3-2 system. 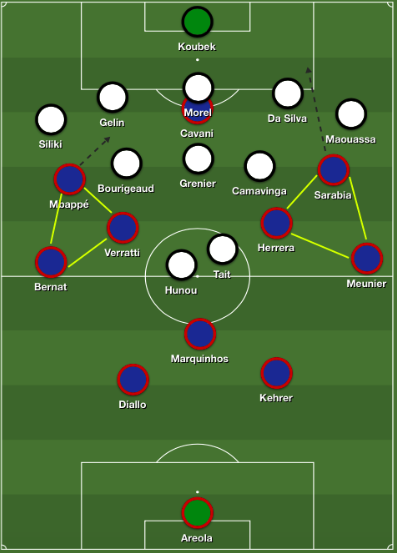 PSG played in a 4-3-3 system, focusing on creating triangles on the wings. The symmetrical trio’s fullback-central midfielder-winger would combine together, while Cavani was pinning the central defense and not involved with the others. Verratti and Mbappé’s magnetic effect on the ball made the progression happening down the left wing most of the time. As Rennes’ 5-3-2 shape was blocking the middle and preventing access to the precious halfspaces, If you divide the field in five vertical lanes, the halfspaces are the lanes that are not on the wing and not in the center. Because there is no touchline like on the wing, players have the freedom to go everywhere. But this zone often is not as well-defended as the very center. This makes it a very valuable offensive zone to play in and a lot of chances are created by passes or dribbles from the halfspace.PSG played wide and in depth.

Passers like Verratti and Marquinhos often tried to pinch the ball behind the defense, and Sarabia showed some quality movements off the ball. Mbappé could do the same thing, although he was more likely to receive the ball in his feet and then cut inside, rather than make a run in behind. Mbappé was an exception to a lackluster PSG, as he was the only player trying really hard to carry the ball and make something happen when in possession.

Rennes’ plan was simple and expected. They tried to neutralize PSG and use transitions to bring the ball forward. They also played long from the keeper and aimed to fight for the second ball, yet Paris really maintained all those situations under control (PSG won 72% of the aerial duels in the first half). Rennes’ intentions on the ball were a little bit limited, but they mostly prevented PSG from creating danger in the beginning of the game. Both teams were not helped by the terrible state of the pitch anyway, which was extremely bobbly.

First turning points in the game

PSG was having trouble against that closed defense, and they were more in a wait-and-see mood, rather than rushing forward. Their first shot of the game came through a set-piece headed on the crossbar by Thilo Kehrer. On the very next action, Rennes were able to bring the ball on the right wing. Kehrer failed to manmark Hunou, who scored after a good delivery inside the box by Benjamin Bourigeaud. This embodied some PSG flaws in terms of defensive quality, concentration and efficiency when Thiago Silva is not playing. As a result, Rennes took the lead with their first and only shot on target in the whole game.

As a consequence of the first goal, Rennes were comfortable enough to sit even lower on the pitch. PSG had close to 80% of the ball possession for the remaining minutes of the first half. The score effectively drove Paris to push their actions higher, with more and more crosses inside the box. But the zone was too overcrowded by defenders for Cavani to be able to make something out of those (poor quality) deliveries.

PSG kept the same animation but they insisted on a specific mechanism to try to take advantage of one of the few weaknesses to be found in Rennes defense.

When PSG built on the left side, Rennes’ three central midfielders had to cover the whole width of the field. They were using zonal marking, and would move as one on the side of the ball. This created space on the opposite side for Herrera and Sarabia. 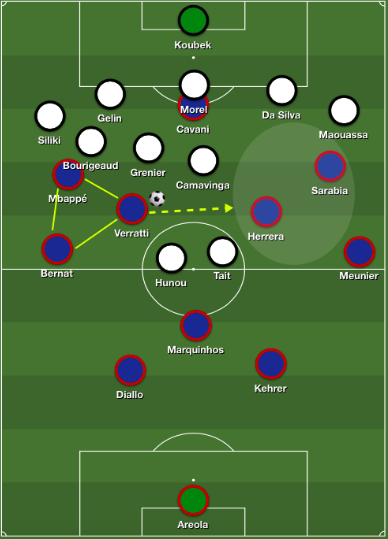 Verratti was aware of that and insisted on passing the ball to Herrera, which resulted in Sarabia as the last man involved in the offensive moves. The idea was good. However, PSG definitely lacked pace, fluidity and quality to fully take advantage of that process. Eventually, PSG did not create big chances and resolved to long range shooting. Most of the thirteen shots PSG attempted in the first half were from the outside or the edge of box, in difficult positions with many opponents between the ball and the goal. 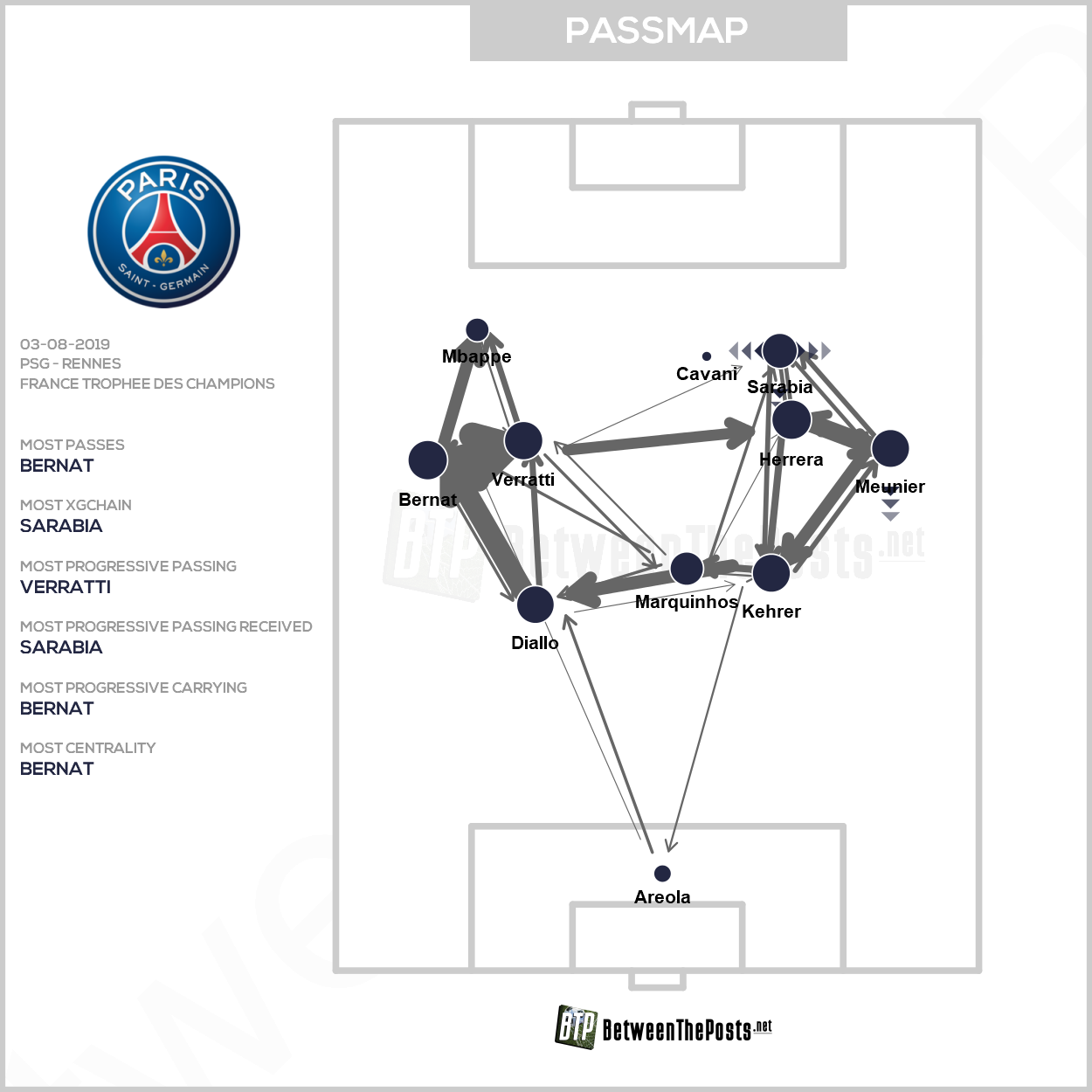 Second half: PSG confirm their domination and turn the table on the scoreline

PSG came back on the pitch with the same system and a similar style of ball possession, but a few tactical nuances that are worth mentioning. First, Verratti appeared to be more free and more dynamic. He was still the left number eight in the system but he also influenced the game in different zones. Then, PSG also kept on trying to play past the defense with chipped passes. Sarabia’s ability to identify and exploit interesting spaces is remarkable in that respect. And it is no surprise that the equalizer came from him for Paris.

In minute 57, Marquinhos chipped the ball over the defense to Sarabia. The Spaniard made a lovely volleyed pass on his weaker right foot to Mbappé, who only had to score the tap-in. First big chance, first shot on target since the last 45 minutes and PSG levelled the game up. Two minutes later, Cavani went very close to scoring the second Parisian goal, after a good cross from Bernat who brought a lot of energy on the left wing.

This was the moment Tuchel chose to substitute Herrera for Di Maria.

After the Argentinian came in, Sarabia went one step lower in midfield, yet playing more as a number ten, while Di Maria would be the right winger. There was also plenty of rotation going on between the two. Despite that change, the attacking momentum carried on for twenty minutes after the goal. This is also clear when looking at the expected goal plot of this match. 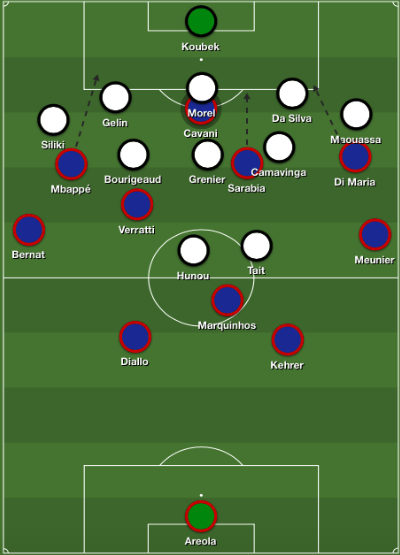 New organization after Di Maria went in. Still a 4-3-3 shape, but Tuchel gave it a new twist in the second half. PSG much more dangerous and penetrative as a result.

Minute 73’, Di Maria gave the lead to his team with a stunning free kick curled into top corner. The fact Mbappé was celebrating the goal before Di Maria even kicked the ball speaks volumes about the latter’s set-piece taking. 2-1 with little under twenty minutes to play.

Rennes’ reaction against a not so reassuring PSG defense

The first goal conceded stunned Stéphan’s team, but the second one woke them up.

Meanwhile, it gave PSG a break and a moment of rest. As a consequence, ball possession was more balanced, as Rennes even had 53% possession during the last twenty minutes. As a result, they shot five times during this time slot, and PSG only once.

Throughout the match, PSG’s defensive line did not always look the most solid, as it was already the case with the pre-season game. As a consequence, Tuchel substituted Meunier for Thiago Silva to regain some defensive quality. Even though Rennes gained some access to the penalty area on a couple of occasions, they could not score an equalizer, meaning PSG won their first prize of the season.

In the end, not a brilliant PSG side against a team that finished tenth in the Ligue 1. However, no conclusions should be drawn based on this first game, played in China’s hot climate on a horible pitch. What we can take away from this match is that PSG need to improve the defensive efficiency and the calmness of the team when they protect the lead.

With the bulk of his best players from last season unavailable, Julien Stéphan and Rennes made the most of it. Honorable mention goes to sixteen year-old Eduardo Camavinga, who was holding his own in left central midfield against top quality opposition like Marco Verratti, Ander Herrera and Marquinhos. Rennes are surely a team to follow this season, and Stéphan a manager to watch. 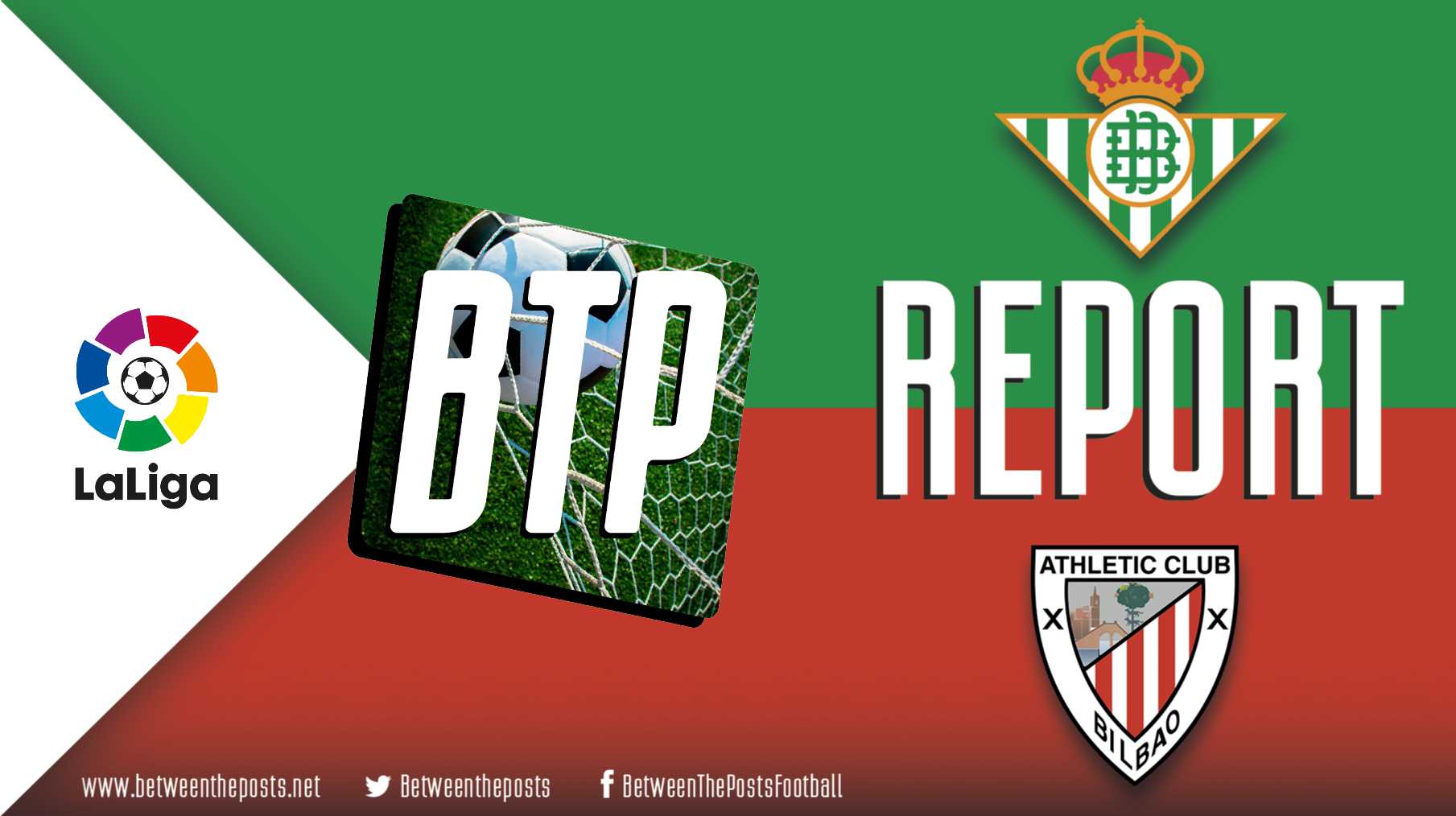