Pep The Podiatrist: Mastering The Management Of Footedness

Manchester City are in the habit of breaking down low blocks. Pep Guardiola always finds ways to reinvent the wheel, exploiting the space and time opponents afford his men. In this article, we take inspiration from his interviews to explore how footedness influences his outfit’s offense.

Usain Bolt, the fastest man alive, hails his former coach Glen Mills as an integral part of his success story. A precocious sprinter in his youth, Bolt was prone to injury. If not for Mills urging him to get a diagnosis for his scoliosis, his long limbs, an atypical build for 100m sprinters, might have turned out to be wasted potential. Elite performance calls for athletes to be in tune with what their bodies can do.

Akin to Bolt within the world of sprinting, Manchester City have set a unique standard in the Premier League. Four times champions in the last five years, this outfit have molded into an automaton whose control of the ball has no rival. The mastermind is their own Glen Mills. An obsessive planner whose love of fine detail has taken him into the field of podiatry: Pep Guardiola. His attention to footedness has been behind intriguing roles and relationships that have powered this automaton’s latest update.

Bernardo and the engineered underlap

A strong example of one of these details was on display during an away game at Leicester City. The King Power has often been a stadium where England’s elite can slip up. Indeed, the Citizens’ single goal triumph avenged their loss in the Community Shield five weeks prior. The left axis was pivotal to their final third threat in both clashes, but the league fixture featured a key wrinkle. Bernardo Silva, often played on the right by Pep, was a left sided central midfielder. What was his rationale?

Guardiola explains that he switched Bernardo to the left-hand 8 position so he could have more players in wide positions on their stronger foot. With Grealish on the left, he didn't want two right footers. For example, Bernardo can cross first time with his left.

City’s 2-3-2-3 structure had leaned on this small detail in both games. The narrower positions of their fullbacks let them build the play centrally and drew Leicester’s wingers inward, giving Jack Grealish space and time on the flank. Once he received the ball, a left footer broke through the inside channel to breach the back four. Benjamin Mendy took on this duty in the Community Shield, racing forward from deep. But a new role for Bernardo rendered the danger of an underlap a much more potent one.

As Bernardo was now the man to support Grealish, he stood inside Leicester’s block. The chance of a halfspace run came to life earlier in the attack, forcing blue shirts to commit to covering Bernardo. A direct passing lane from the central defenders to Grealish then opened, picking up the pace of the ball circulation. And once the midfielder received the ball, the value of his left footedness was still intact.

6th minute: common offensive pattern from Manchester City versus Leicester City. Aymeric Laporte’s pass to Grealish forces Castagne to confront the winger. Bernardo duly underlaps, pulling out Çağlar Söyüncü from the center. He and Castagne try to hem in Bernardo, who wriggles away from the pair of markers before targeting the overload of Gündogan, Torres and Gabriel Jesus at the far post.

Starting inside and going out to underlap is a tight maneuver. A midfielder cannot easily take the ball on their ‘proper’ foot thanks to an outward facing, closed body shape. Such an awkward orientation is even harder to correct when moving quickly to get in position to support on the flank. But it was no problem for Bernardo, whose cutbacks and mesmeric dribbles stole the show. Not only highly nimble but also on his ‘natural’ side, he needed no time to switch back onto his strong foot and pose a threat.

In the end, Bernardo played a decisive part in deciding the game. Yet, it was apt that this contribution turned out to be City’s winning goal. His uniquely gifted compatriot fulfilled the role of a peculiar playmaker. João Cancelo, the embodiment of a modern fullback, has tended to produce his latest exploits on the left flank. That same fixture at the King Power was a more muted case in point.

Cancelo: the master key to a central lock

As we have seen, Bernardo was the initial threat. Track him with a central player, and Grealish could invert to attack the empty halfspace. If the winger doubled up on Grealish and the front two kept tight to Rodri, the back pass to the left back was open. For Cancelo, a man in time and space, this dynamic from the ‘wrong’ side as a right footed fullback has been a plentiful source of offensive potential.

Operating from the ‘wrong’ side prompts more diagonal actions with the ball. The ball-carrier must shift their field of vision away from the sideline and dribble or move inward to use their favored foot. Here, it was an ideal dynamic to harness. Bernardo’s underlaps left the halfspace empty for Cancelo to turn his attention toward and Grealish to slip inside. At the same time, a new halfspace threat allowed Bernardo to get free from markers by moving wide, still on his left foot, to threaten from the wing as a free man if any secondary runs were marked, and this all happened as the triangle seamlessly rotated. 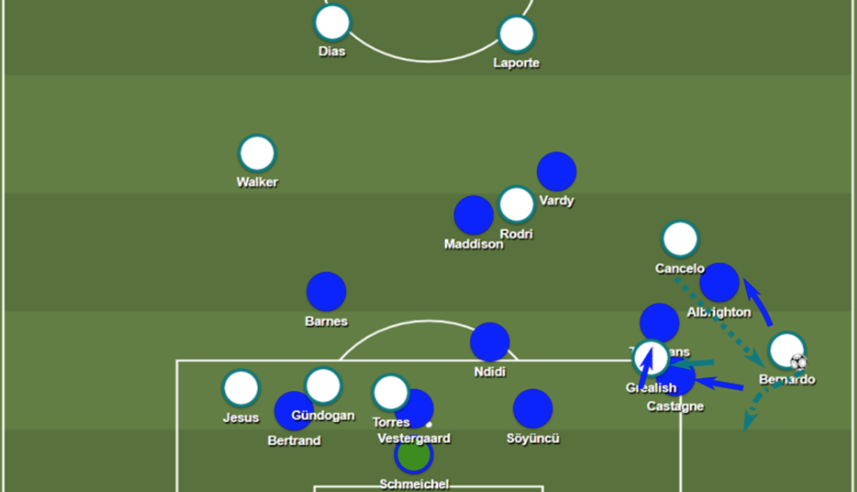 56th minute: rotation from Manchester City versus Leicester City. Another underlap from Bernardo did not lead to direct progression down the flank. However, it did create room for Grealish to rotate into the halfspace. The winger forced Tielemans to block a dangerous passing lane open on Cancelo’s strong right foot and pulled Castagne inward. So no one marks Bernardo, who can dribble out wide.

If opponents cannot regroup to press Cancelo quickly enough, he can use his technical prowess to open up defenses from deep zones of the pitch. Last season, he took apart many back five setups, whose lack of numbers from the front limit their ability to press Guardiola’s talented defenders. Chief among them has been City’s kryptonite Chelsea, against whom he assisted the winning goal for Kevin de Bruyne in January. He also starred in the duel at Stamford Bridge due to the rotations on City’s left.

Ahead of a ball carrying Laporte, Cancelo frequently peeled from the halfspace up the flank, Grealish ran inside, and de Bruyne loitered more centrally. This dynamic created a pick-your-poison scenario.

Reece James was always in a very tight spot. Should he force César Azpilicueta to handle two City attackers or leave Cancelo free to manage the halfspace overload? Logically, the left back became the free man for City as the less directly dangerous option. But Cancelo could now step inside past James and use the passing options available on his strong right foot. Solve one dilemma, and far more arise.

Leave an underlapping Grealish free out wide, accept the stretch between your center-backs where Cancelo can find the deep runner, de Bruyne, or let Phil Foden drop to link and switch? The art of defense entails giving opponents something to take away other options. But with Cancelo, a master key to cracking locks into the center, at left back, City’s attack still looks like a tactical buffet.

44th minute: buildup to Bernardo’s second goal versus Sporting. Foden stayed deep to pin the double pivot, while City again overloaded the left halfspace. Once Cancelo received from Laporte, Bernardo underlapped to support. Gonçalo Inácio tracks him, leaving Sterling free to race behind the back five. Cancelo has enough space and time to find the winger, whose cutback eventually teed up Bernardo.

Cancelo’s role as a left back exploits one other handy detail. Once a fullback uses their strong foot on their ‘natural’ side to open their body, they near the touchline. So, the constraint of a boundary, acting as an extra defender, reduces the margin for error. On the other hand, Cancelo will switch feet to his right and can try to pick out ambitious passes with no fear of this limitation. His teammates cash in on chipped through balls, whose inward arc lets them carry their momentum toward the goal.

However, Pep is willing to harness classic dynamics on the flanks. He modified his choice of the front three ahead of a 2-0 win at Old Trafford in the Manchester derby. Jesus was on the right, and Grealish dropped out for Foden on the left. The selection of two natural sided wingers had a particular purpose.

“Against a back five when you go to the byline you break all the back five. With a back five you play on the opposite foot so a right-footer if you go inside they wait for you…”

The manager had learned from the duel earlier that week at home to Club Brugge. A 5-1 rout in the reverse fixture prompted the Belgians to ditch their usual 4-4-1-1 block for a 5-3-2 defensive shape.

Grealish and Mahrez, inverted wingers, sought to drive at their markers. But extra width in Brugge’s backline reduced the distance for their wide defenders to close down the wingers. City still created isolations, but the wing-backs were not on the back foot and could track many ball-carries inside.

Sterling is a more explosive, dynamic profile than Mahrez, but his entry to the pitch as a natural sided winger helped. Even if the wing-back closed him down quickly, the winger did not have to force his way through compact spatial coverage – a core facet of City’s strategy. They do not intend to look for solutions in the final third; an opening must present itself. If Sterling opens his gait and races down the outside, he can hit a delivery around the back five. If he forces the defense to drop, other sky blue shirts can threaten from deep. His linear dribbling broke the lines and decided the duel on the right.

79th minute: breakthrough from Manchester City versus Club Brugge. Sterling squares up Federico Ricca, driving outside. While the back five retreats, Jesus moves to the left of Brandon Mechele to pin him centrally. Now, Gündogan has room to run off the back of the midfield and Sterling feeds him. If he were under cover, de Bruyne, arriving late in the blindside of Hans Vanaken, could have received.

Such in-game changes were crucial to City’s Premier League title from last season. Gündogan’s brace stole the headlines in the 3-2 victory over Aston Villa. But the tide had already begun to turn at the start of the second half after Pep introduced a new left back. Cancelo, whom his manager has not deemed a “natural fit” for the role, was his team’s main outlet out wide. But Villa’s compact 4-3-2-1 block and narrow front three gave him little room to infiltrate centrally. Enter Oleksandr Zinchenko.

Actions on his left foot disoriented Villa’s block from wide regions to which they had worse access. Line-breaking diagonals in front of the back four, a signature move from the left back, were not an option for Cancelo. His inversion never opened up that passing lane. Nor was Zinchenko afraid to carry the ball to the byline. That same threat of Sterling against Brugge forcing their line to drop paved the way for Rodri’s goal on the final day of the season. Pep’s podiatry had worked its magic. 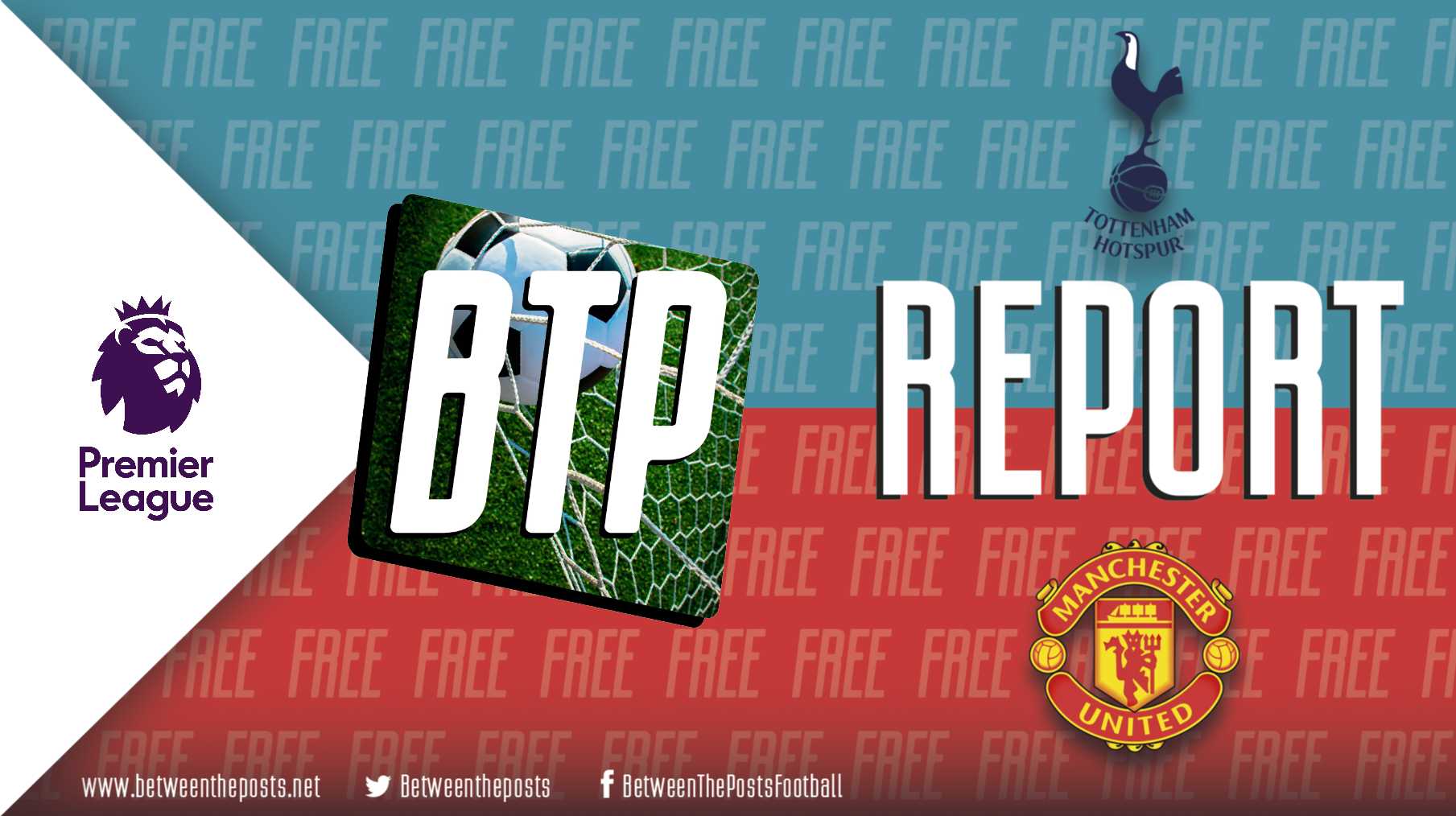 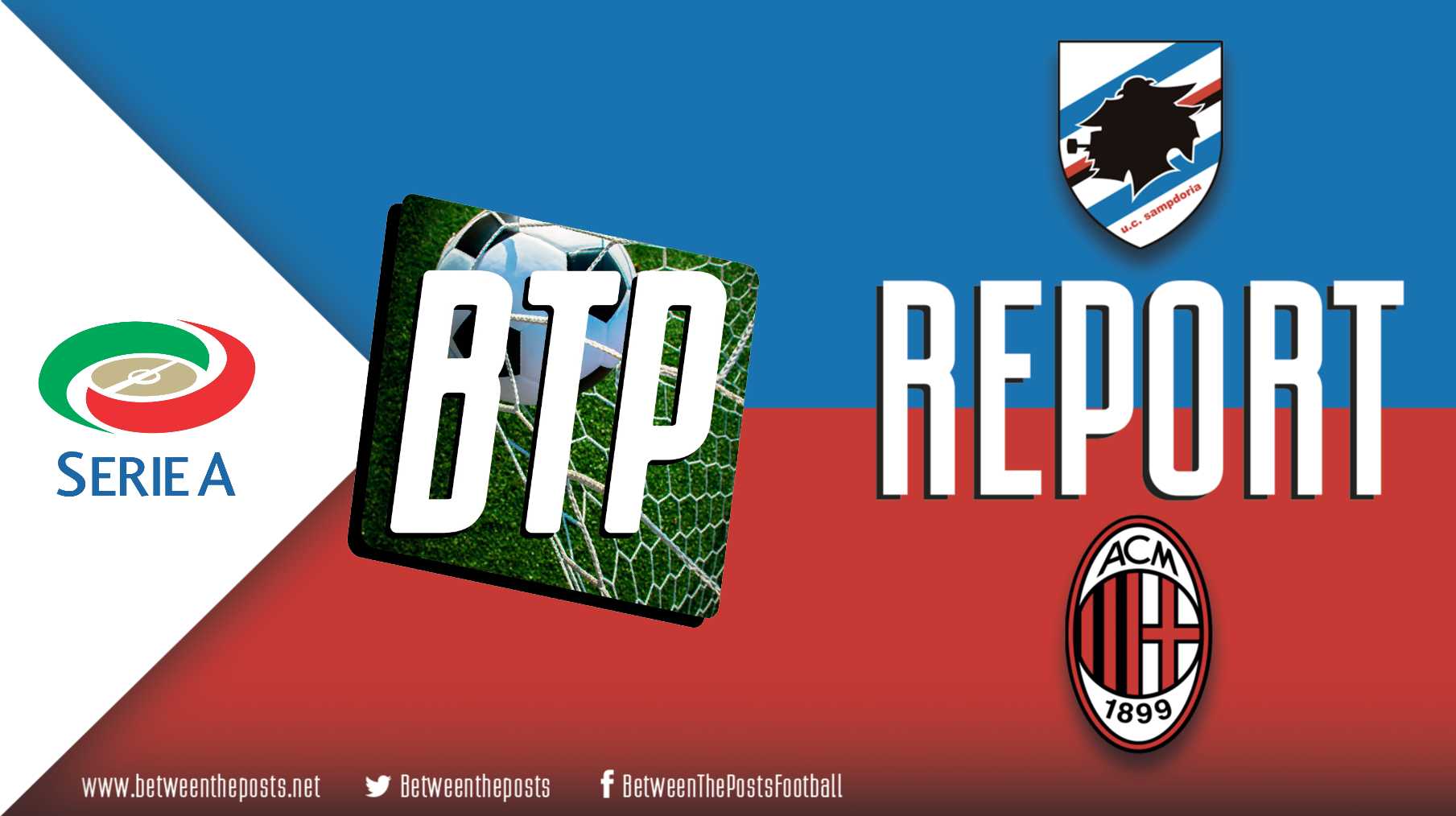