Giving up the high ground to their neighbors before the kickoff, Spain knew the imperative laid with them to force the issue. Still struggling to make the most of their dominance of the ball and the territory throughout the match, their growing enterprise paved the way to a dramatic finale.

Portugal have been a nation waiting to take flight. Their latest squad, far more gifted than the one that won the EUROs in 2016, has had the potential to carve out a permanent spot at the top table of the international game but lacked the direction to make good on their talent. Failing to reach the last eight of a tournament since that triumph, a 2-1 loss to Serbia might have ruled them out from the World Cup altogether. However, now safely into the group stage, they wished to enter in a fine vein of form.

The knives are back out for Spain. Off the back of the ‘worst’ first half under Luis Enrique, they lost 2-1 to the Swiss in their last game. Once in pole position, they sit two points adrift of the top spot, lying behind their hosts. Furthermore, the defeat was down to a performance that was predictably poor. Bereft of invention in the final third and frail in their own, Spain’s ball dominance could not mask familiar flaws. Could they work around these faults to move into the next stage of the competition?

Enrique duly reacted to the setback from the weekend with heavy rotation to his starting eleven. Hugo Guillamón stepped in to play to the right of Pau Torres, while José Gayà and Dani Carvajal were the two fullbacks. Ahead of them, all three midfielders dropped to the bench. Thus, Rodri was the anchor in the middle of the park whom Koke and Carlos Soler supported. Even though Marcos Asensio had impressed against the Swiss, he was the only forward to lose his spot, making way for Álvaro Morata.

On the other hand, the Portuguese manager Fernando Santos mainly ran out the same lineup. Two of his three changes were in the fullback slots. Diogo Dalot hit the net twice against the Czechs but lost his place on the right of the back four to João Cancelo. To the left was Nuno Mendes, who replaced Mário Rui, and Diogo Jota swapped in for Rafael Leão in front of him as the winger. So, the spine of the side, featuring Danilo Pereira in the center of the defense and Cristiano Ronaldo, stayed the same.

The opening 15 minutes went the way one would have expected. The away team hoarded control of the ball, keeping three quarters of the possession in this phase, and probed the Portuguese block. 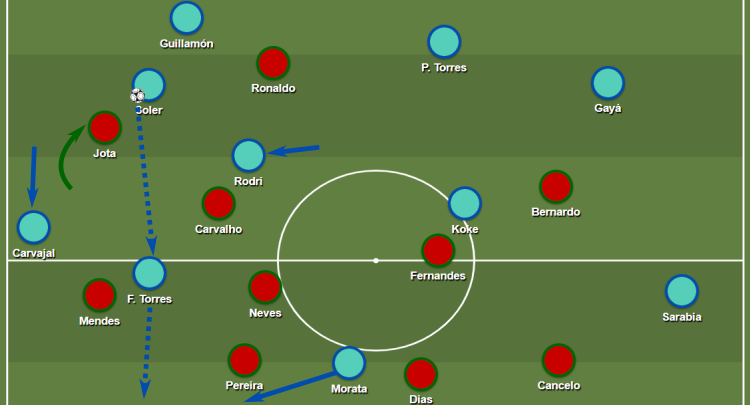 2nd minute: offensive sequence from Spain. Soler drops and Rodri moves towards the midfielder to offer a lateral option. Ronaldo edges closer to Guillamón, prompting William Carvalho to go nearer to Rodri. Since Jota tries to block the outward passing lane to Carvajal, Torres is the free man to the inside of Nuno Mendes. The right winger then feeds the ball into the channel for Morata to pursue.

Spain worked their way up the field in a broad 4-3-3 offensive structure. Despite the criticism of the attack on the weekend, Pablo Sarabia and Ferran Torres again were the pair of wingers. Both men held the width on the flanks, operating on their natural side. The question remained if and how Enrique’s men would breach the final third. If the two forwards could not engineer a breakthrough on the outside after switches of play, another option for the visitors was a familiar routine of rotations.

Chief among them was the interchange on the wings. A central midfielder could drop out of the block, tipping to the halfspace. The fullback then moved higher, prompting the winger to slide inward. Two options and more movement ahead of a narrower ball carrier had the potential to shift passes sharply and initiate combination sequences. Yet, they could only exploit this prospect from time to time.

One man must occupy the space between the lines to let this rotation work. Carvajal’s deep, narrow position placed this duty upon Soler and Ferran Torres on the right edge of the attack. Occasionally, the winger moved inside too late, or even not at all, while Soler found himself between two roles. Rodri’s ball sided support helped prevent his team from isolation, but productivity was scarce. 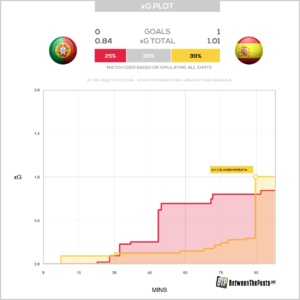 Enrique searches for a solution to the stalemate

Territorial gains that Spain could preserve tended to pop up far more on the left wing. Koke came to the left of Pau Torres, and Sarabia continually plugged the gap in the halfspace. Not even these plays generated much, though, as their only effort in the first half hour came from a high pressing sequence.

14th minute: Guillamón drives forward with the ball. He squares up to scan the left halfspace, where Sarabia has run inward, pinning the back four, and Morata has dropped to offer a diagonal link. Rúben Neves notices this movement and stays deep. Now the central defender can bounce the ball off of Rodri, whom Fernandes initially left free to support the midfield, and switch the play to Gayà.

Indeed, Portugal’s territorial losses also emerged from varying success from higher pressure. Spain pushed from the front in an asymmetric 4-3-3 structure. In this system, one of the wingers, usually Ferran Torres, closed down the central defenders with Morata, while the midfield marking muddied the middle of the park. On the other hand, Fernandes jumped forwards to cover Rodri in a 4-2-3-1 formation where Morata’s linking and the calm ball circulation of his teammates broke the lines.

Hence, the hosts were seldom in possession but aimed to be much more efficient. Noteworthy was their threat on the break. Diogo Jota nearly cashed in after 33 minutes from a counterattack, forcing Unai Simón to tip his strike onto the bar. For all their possession, Spain had conceded better chances.

So, Enrique turned to the bench for inspiration at half time. Ahead of the second half, Sergio Busquets replaced Guillamón. He sat at the base of the midfield, forcing Rodri to fill in as the right sided central defender. A quarter of an hour on, Soler made way for Pedri and Gavi came on for Koke in midfield.

The first substitution met a new intent from the Portuguese. Higher pressure briefly knocked the wind out of Spanish sails, but the new Spanish midfield from the hour mark made a difference. Enrique had emphasized merely keeping the ball before the break. But as the minutes ebbed away, the manager sought to pave the way to more risk and creativity in the second half. Nico Williams’ entry in the 73rd minute followed suit. Santos recognized the upward ticking of the shot count, sending on Vitinha and João Mario to wrestle back the ball. But Portugal’s passive tendencies had taken hold of the duel.

The contest was meandering to a close, but one more twist was still in the tale. In the 88th minute, Carvajal whipped a searching delivery from the right flank into the penalty area. Williams lurked at the far post, rose above Cancelo in the air, and nodded the ball back along the face of the goal, dodging the reach of Diogo Costa. The winger hoped for contact from a teammate, and Morata obliged, tucking home into an empty net from close range at the death to break the deadlock.

He now has 27 goals in 57 games for @SEFutbol since making his debut in 2014 🙌 pic.twitter.com/swr7RyMdOv

Spain fulfilled the task at hand. While their toothless outlook in the final third was the norm instead of an exception, so was their control of the ball against another nation brimming with elite talent. It is a trait that has served them well in the recent past under Enrique in the knockout phases. And though the dynamism of a man like Nico Williams might offer the impetus to make a difference in the group stages, it is this tactical stability upon which the manager will pin hopes of success in Qatar.

Santos’ verdict on the defeat harked back to the catastrophe against Serbia. They ended up second best to their opponents on the night, but this outcome has also cost them a spot in the Nations League final. While the circumstances of this game are different, the same question hangs over his management in the lead-up to the World Cup. In charge of a country whose players can create immense danger out of nowhere, can he set up his men to impose themselves enough to make their quality count? 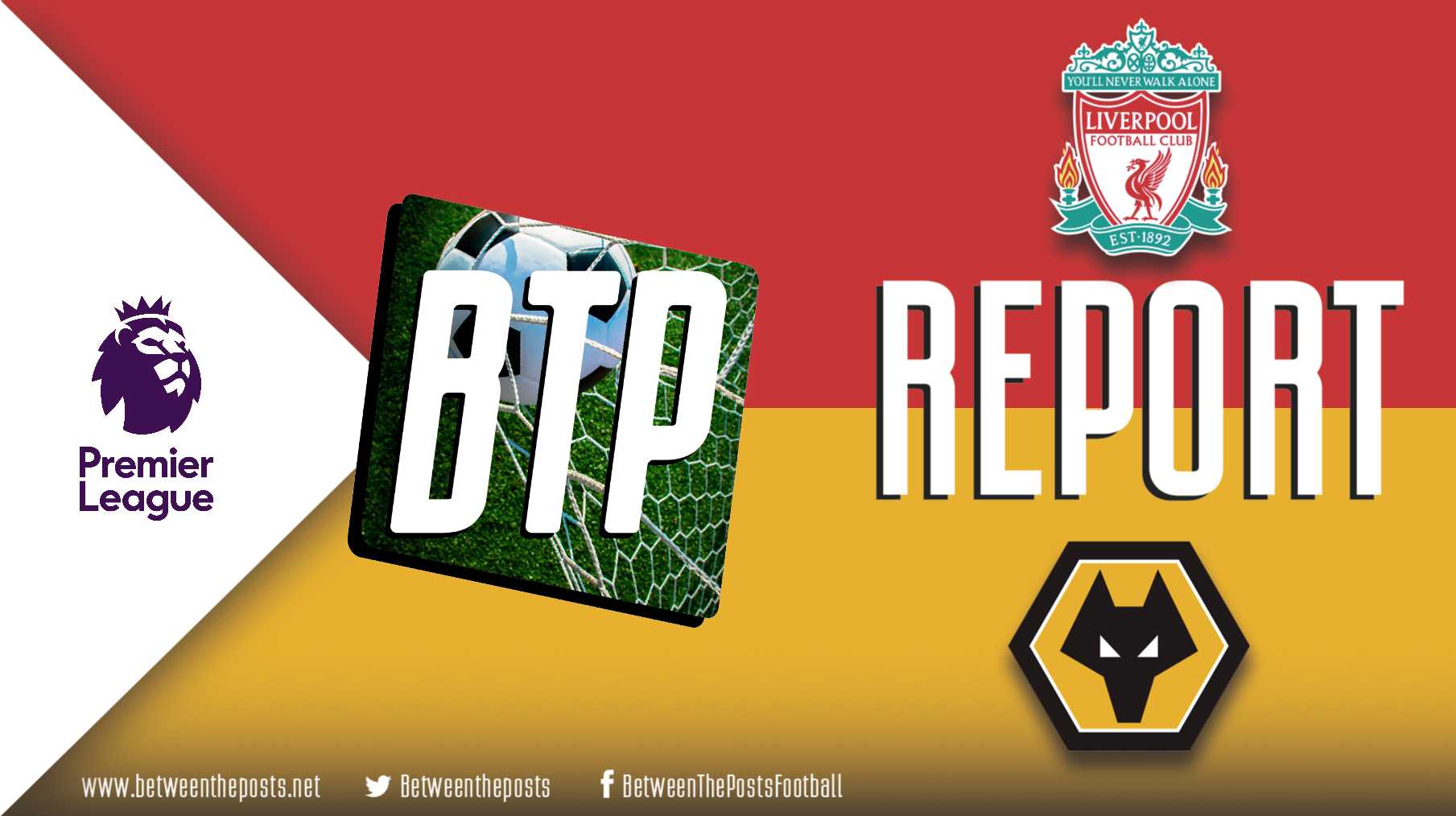